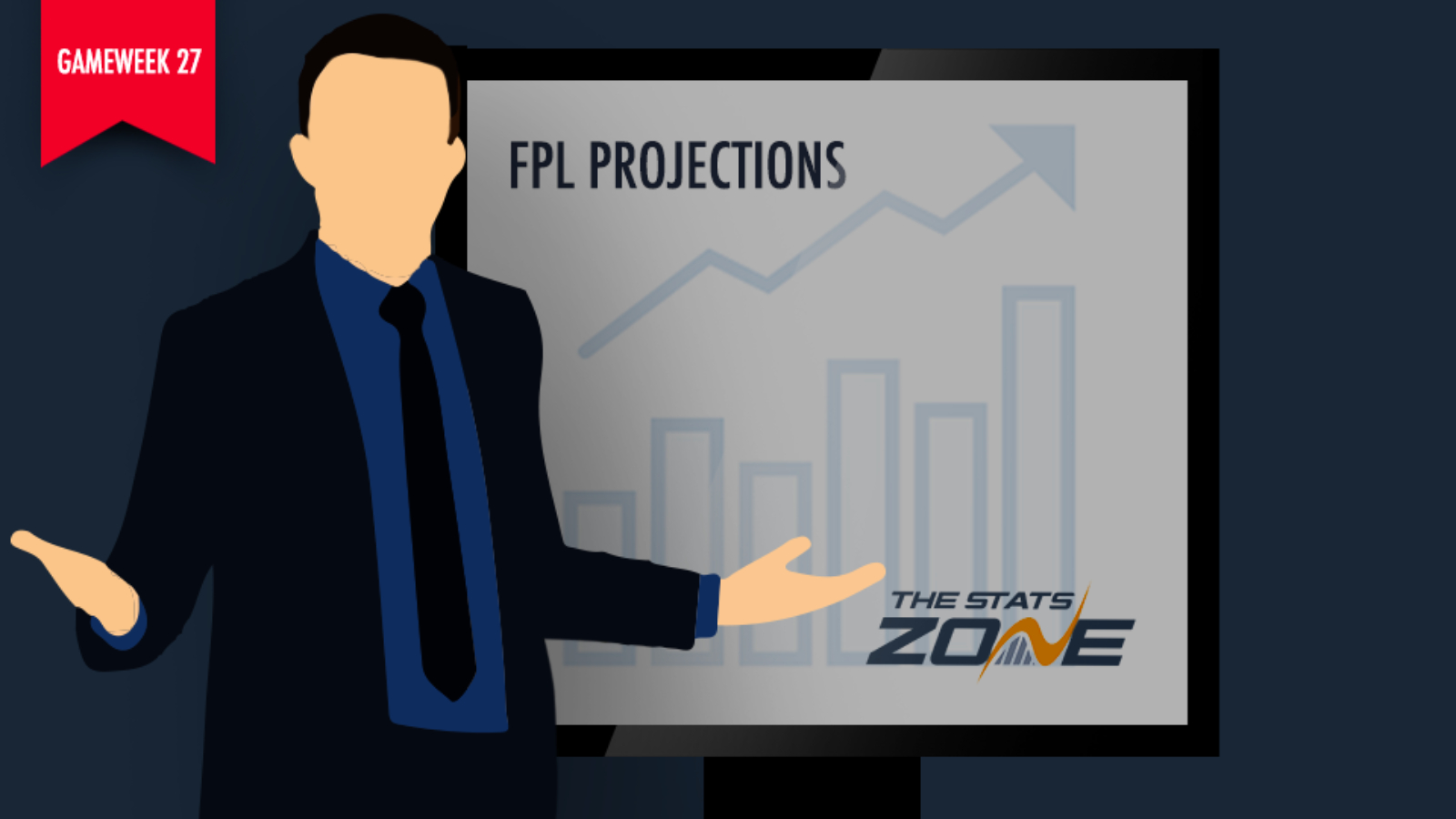 Gameweek 26 served as a key reminder to everyone that selling John Lundstram (£5.0m) could yet turn out to be a mistake with the "defender" coming off the bench to score the winner for Sheffield Utd against Bournemouth. Another popular FPL asset recently sold in bulk came off the bench to win a match this gameweek for his side, as Liverpool's Sadio Mane (£12.2m) appears to have fully recovered from his muscle injury sustained in Gameweek 24.

Never getting back to double Liverpool attack. We have 12 points locked in every week with double defence. #FPL

Liverpool have now kept ten clean sheets from their last 11 Premier League matches. Other sides that did not concede a goal in Gameweek 26 included Arsenal, Wolves and Leicester. The latter two faced off at Molineux, with the match ending in a 0-0 draw. Additionally, popular forwards such as Danny Ings (£7.1m), Dominic Calvert-Lewin (£6.2m) and Pierre-Emerick Aubameyang (£10.8m) all found the net in Gameweek 26. The question, however, is whether we will see any of these players in the projected best XI for Gameweek 27?

Gameweek 26 saw the projected XI pick up a respectable 58 FPL points. The significant proportion of these points came from the midfield with Richarlison (£8.2m) and Kevin De Bruyne (£10.8m) accumulating 27 FPL points between them after scoring 13 and 14 points respectively. Liverpool's Jordan Henderson (£5.5m) managed 7 points after an assist for Mane's winner away at Norwich, Mo Salah (£12.8m) failed to provide any attacking returns despite being trusted with the captain's armband and neither did Ayoze Perez (£6.2m). Flying full-back Trent Alexander Arnold (£7.7m) returned 7 points, however Cesar Azpilicueta (£5.8m) and Lucas Digne (£5.8m) both failed with only 3 points accrued between them. The forwards also suffered disappointment, with Chris Wood (£6.3m) subbed off early for Burnley through injury, whilst Sergio Aguero (£12.1m) failed to find the net at home to West Ham. 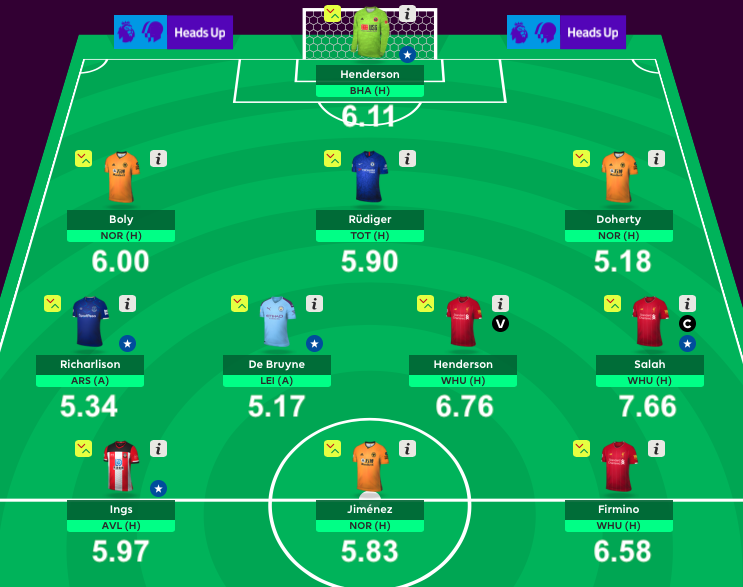 The projected XI see five changes ahead of Gameweek 27. Sheffield Utd's Dean Henderson (£5.1m) retains his place in goal ahead of the Blades' home clash against Brighton. The defence however is all change as Wolves duo Willy Boly (£4.7m) and Matt Doherty (£6.1m) come into the side alongside Chelsea's Antonio Rudiger (£6.0m) with Azpilicueta, Digne and Alexander-Arnold all moving out.

In midfield, Salah is retained and once again entrusted with the captaincy at home to West Ham. Salah has scored 12 of his 14 league goals this season at Anfield. It is no surprise that both Richarlison and De Bruyne keep their places after their Gameweek 26 heroics. Perez is out, as Henderson completes the midfield with the algorithm reverting to a 3-4-3 formation as opposed to the 3-5-2 formation from Gameweek 26.

In the last 5 home games, Salah has retuned 4 times. In the last 5 away games, he has returned only twice. Salah plays West Ham next at home. Easy captain choice for me. #FPL #FPLCommunity

The forward line is all change with both Wood and Aguero ruthlessly dropped by the algorithm. The front three consists of Ings who has 15 Premier League goals so far this season and three in his last four league games at St. Mary's. Roberto Firmino (£9.7m) also comes in with the Brazilian having accrued 22 FPL points from the last three gameweeks. Completing the three-fold forward line is Raul Jimenez (£7.8m) of Wolves. Jimenez has blanked in his last two gameweeks and has failed to blank three gameweeks in a row since all the way back in Gameweek 7. Wolves face Norwich, who sit at the foot of the Premier League table and Jimenez already has one goal against the Canaries this season after scoring in the reverse fixture at Carrow Road. 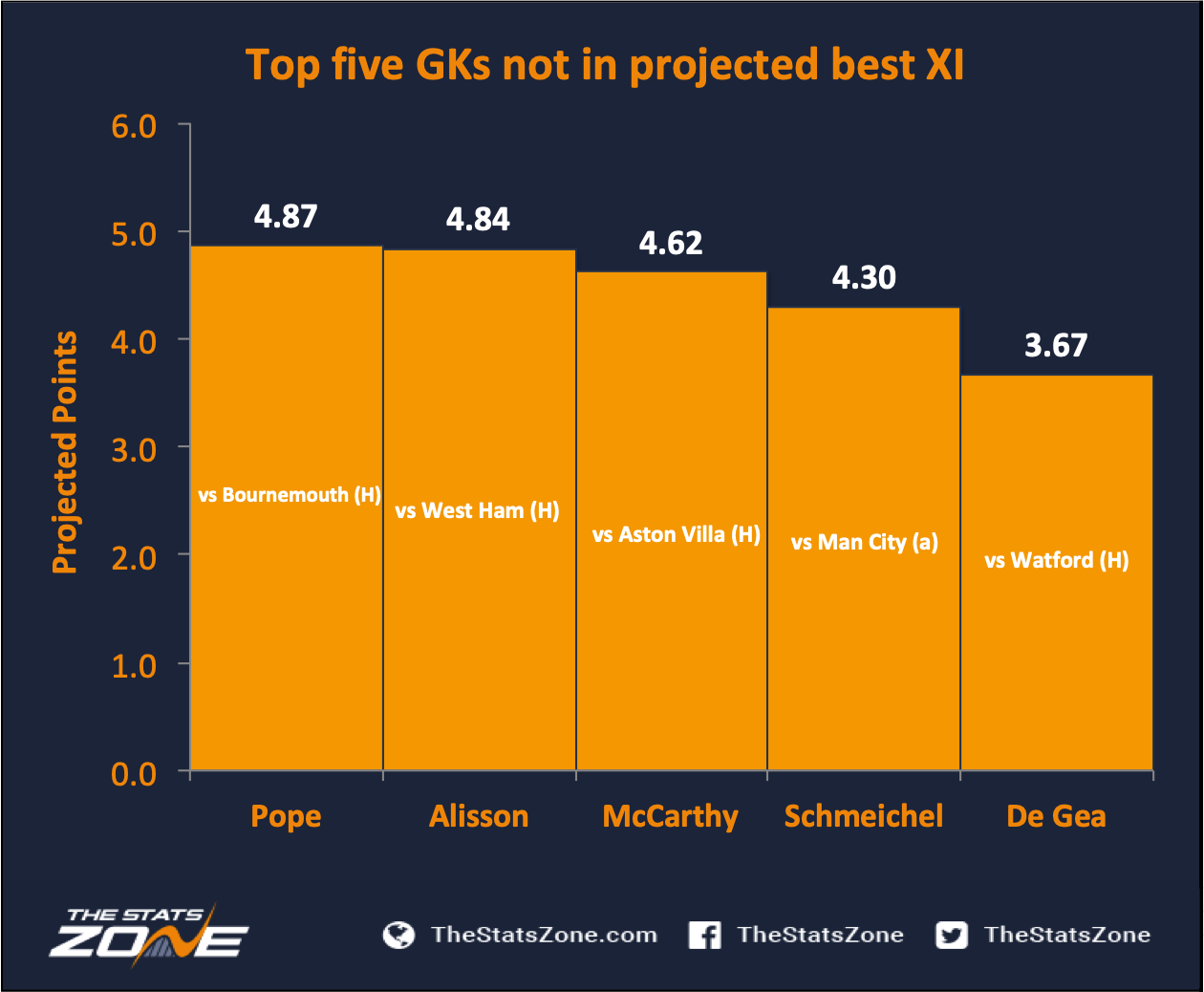 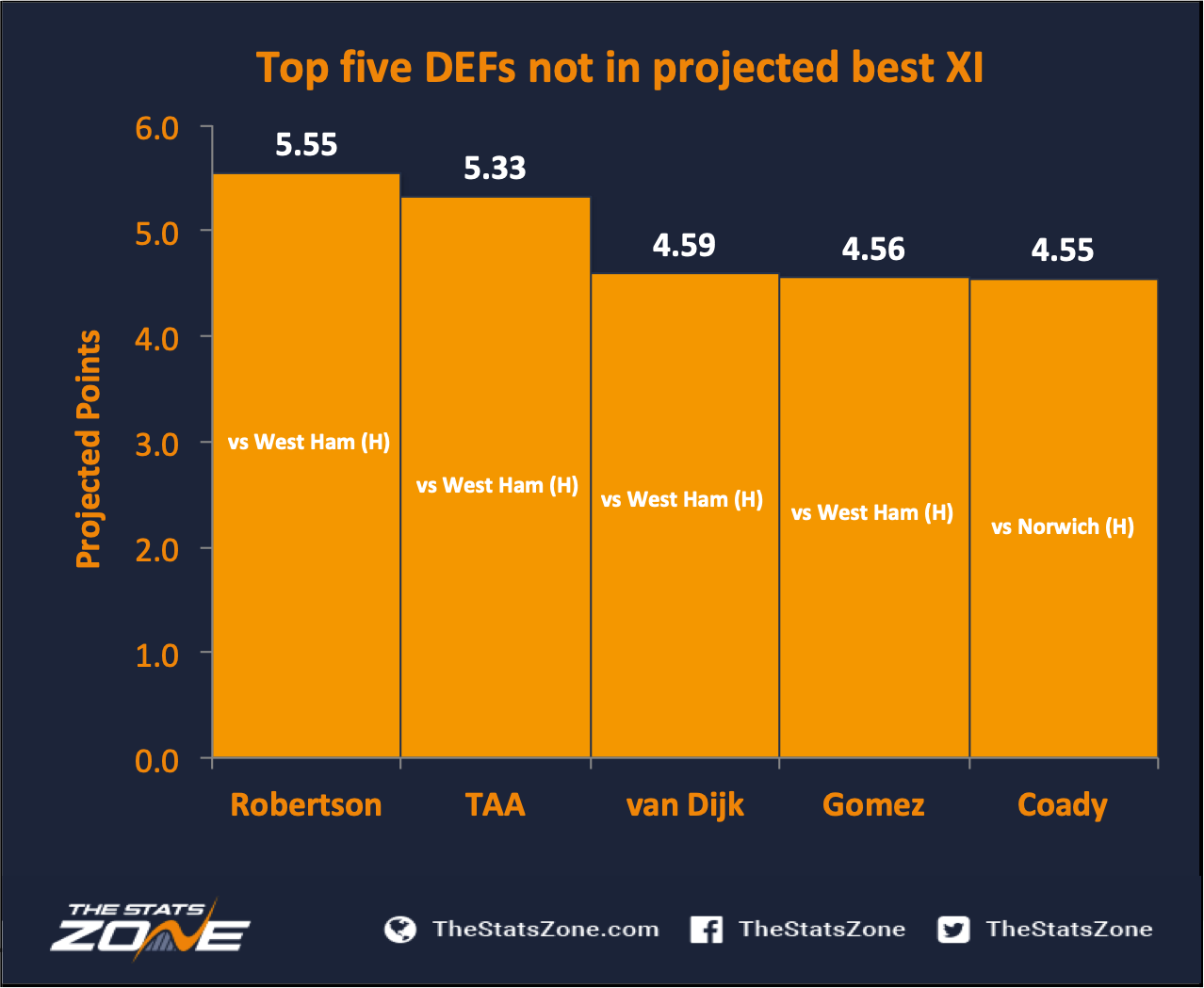 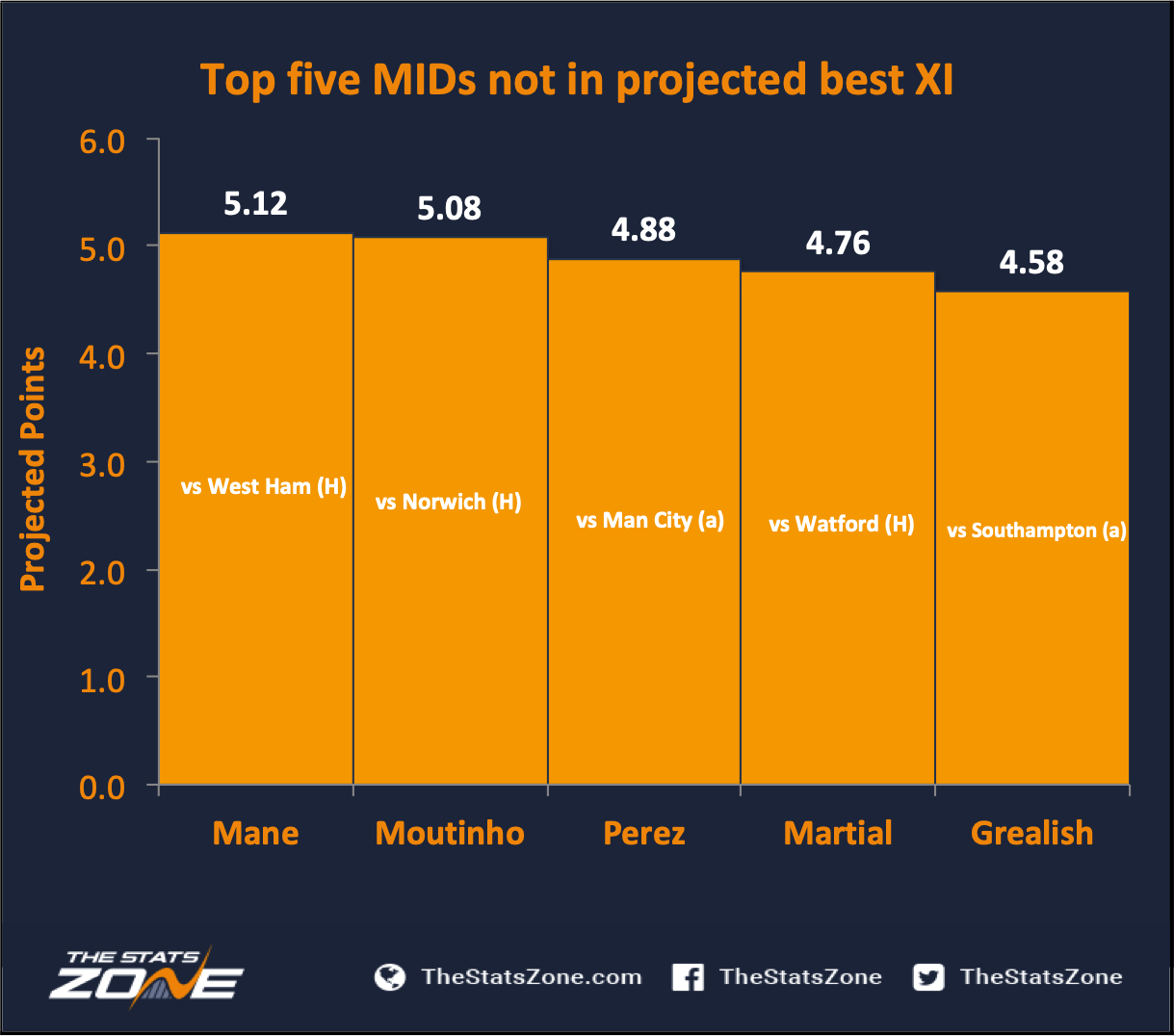 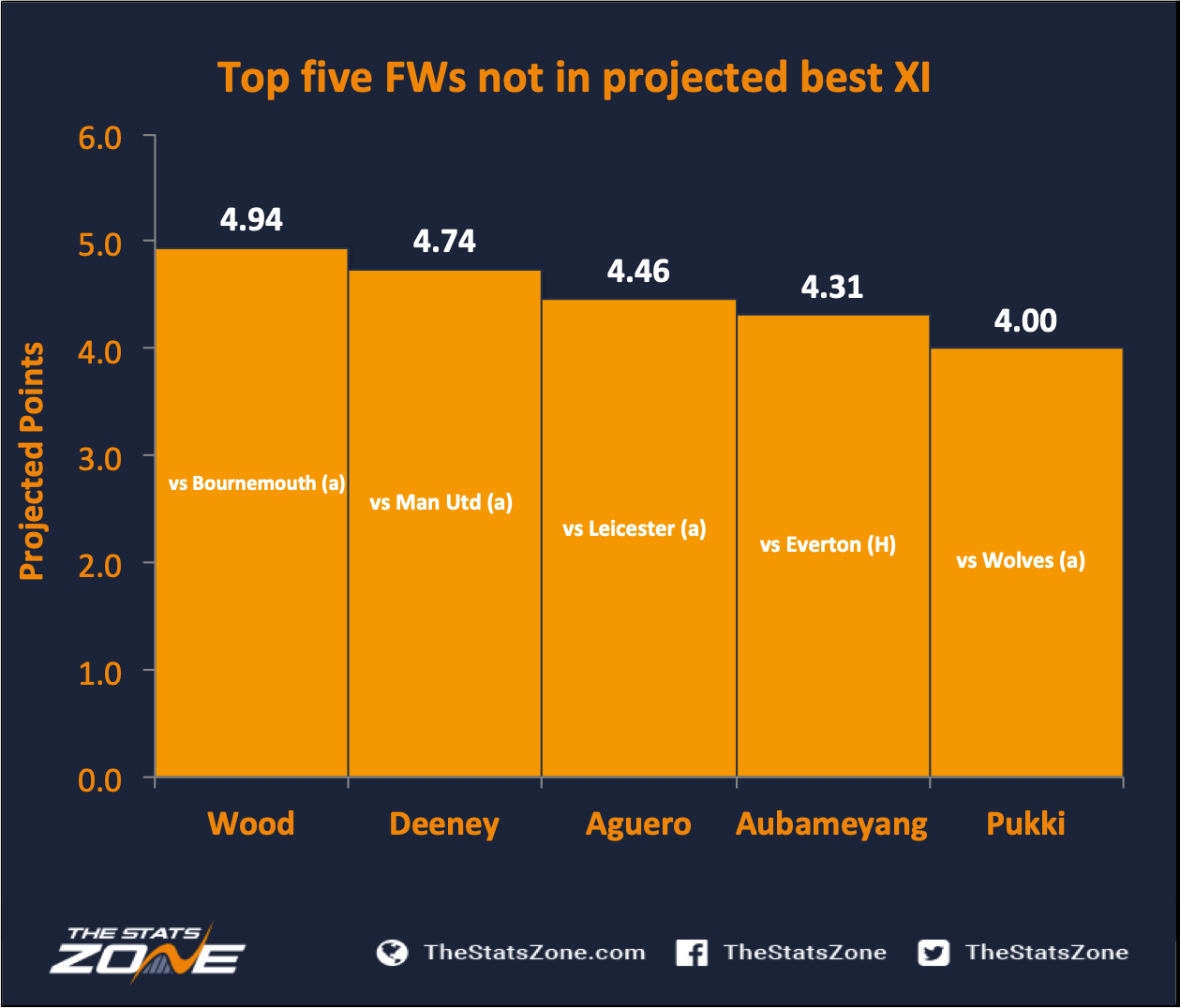