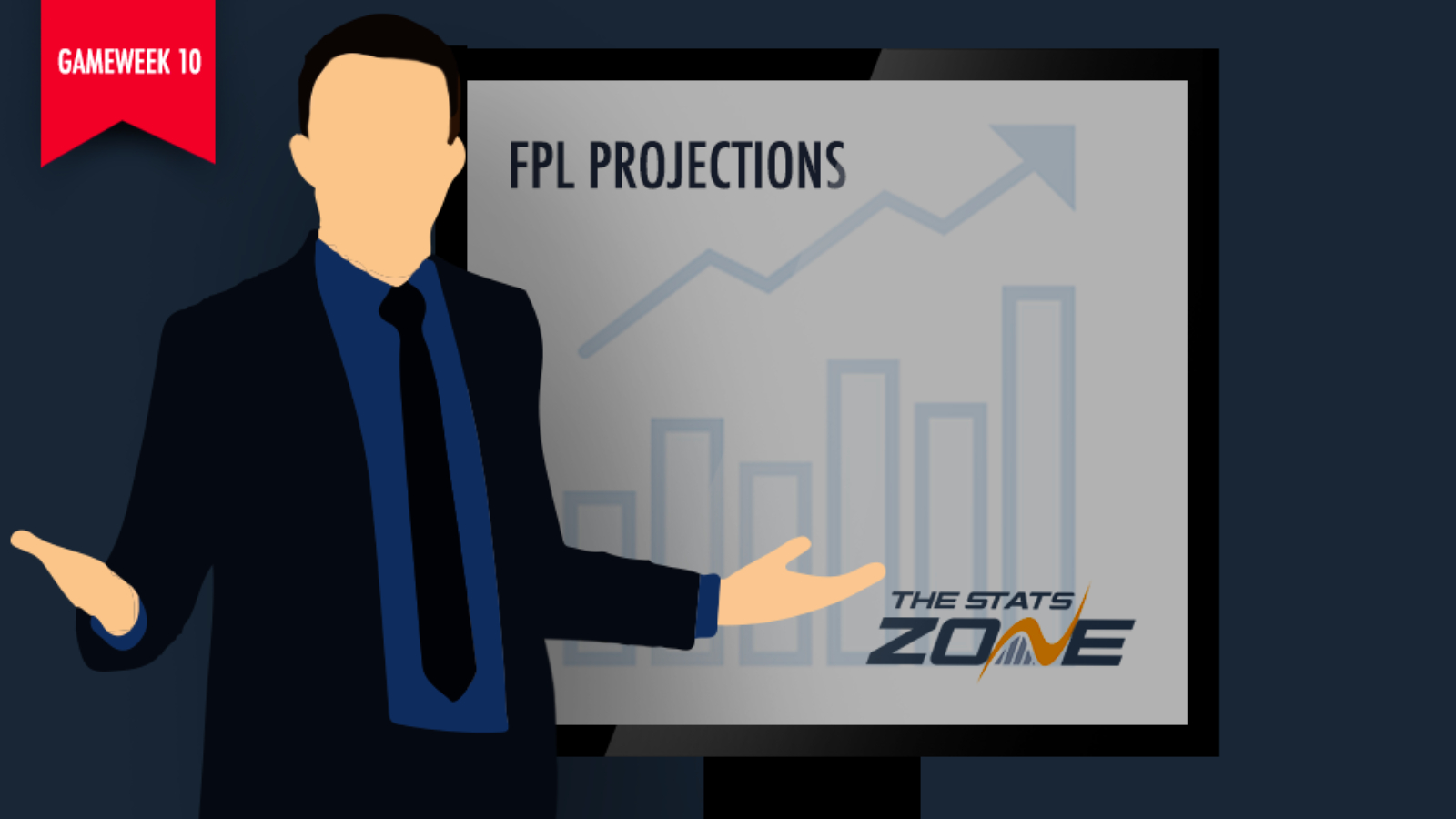 The return from international duty turned out to be just as miserable as the weekend heading into it, as Gameweek 9 saw a global average of just 37 points. Of the 23 players with over 15% ownership, only Mathew Ryan (£4.7m), Nick Pope (£4.7m), Sadio Mane (£11.8m), Martin Kelly (£4.1m), Andrew Robertson (£6.9m), Mason Mount (£6.8m) and Tammy Abraham (£7.8m) scored over six points. In fact, so many premium players didn’t play at all that managers were almost grateful for those that brought in their two appearance points.

I own Sterling and Mane. Aguero and Salah miss out completely and I still get a red arrow. Where are people getting points from. I’m genuinely confused now. https://t.co/E7aH6Xfiks

The algorithm’s optimum squad personified this, coming way below the bleak global average by scoring a dismal 23 points. Rather than the projected total of 71.34, the selected XI failed to deliver any clean sheets, goals or assists. That included Pierre-Emerick Aubameyang (£11.1m), Callum Wilson (£8.0m), Kevin De Bruyne (£10.1m) and Trent Alexander-Arnold (£7.2m). A substitute appearance from Josh King (£6.3m) notched one point, topping the non-emergence of Riyad Mahrez (£8.6m) from Man City’s bench. Onwards and upwards, the fixtures for Gameweek 10 look much more promising, starting with a Friday night meeting between Southampton and Leicester. 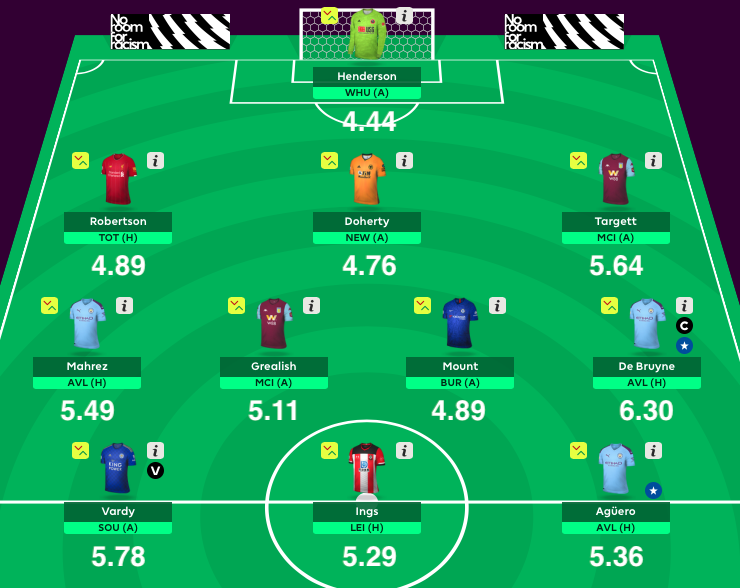 Sheffield Utd beat Arsenal 1-0 and, whilst Lys Mousset (£4.9m) scored and John Lundstram (£4.6m) got all the FPL love, Dean Henderson (£4.6m) continues to excel in goal. His three saves contributed to their fourth clean sheet of the season. Nobody else has four and, alongside Liverpool, the newly-promoted Blades have conceded the fewest goals so far with seven – an impressive feat. Up next is a trip to West Ham and a side whose low number of home shots (40) is only worsened by Burnley.

One shock is the exclusion of Alexander-Arnold, who has been selected for all nine optimum squads so far but an illness saw him miss the midweek Genk trip and causes enough doubt for the algorithm to instead opt for teammate Robertson. Despite the league-low seven goals conceded, Liverpool aren’t keeping clean sheets. The return of Alisson (£5.8m) between the sticks should fix this glitch.

Matt Doherty (£6.0m) has quietly resumed last season’s attacking duties for his 3.3% ownership. A premium price tag scared off many but his goal and 15-point haul against Watford was Gameweek 7’s highest, followed by last week’s assist against Southampton. Wolves are adjusting well to European football and completed back-to-back clean sheets with a shock 2-0 win at Man City, so the defensive and attacking reasons to trust them are back, especially with their promising fixture swing. The main doubt over Doherty, ahead of the Newcastle trip, is rotation. He has played an hour on just three occasions this season, completing two matches.

Five players are provided from the Man City vs Aston Villa clash including, surprisingly, Villa defender Matt Targett (£4.4m). The left-back recently displaced Neil Taylor (£4.5m) and celebrated this with last Saturday’s 96th-minute winner against Brighton. Jack Grealish (£5.9m) has been on fire since being moved closer to striker Wesley (£6.1m), scoring in the past two matches and overtaking the points total of equally-priced teammate John McGinn (£5.9m). With Pep Guardiola struggling to solve their centre-back situation, there could be a weakness for Grealish to exploit.

When Mahrez plays, he tends to deliver. It’s just a shame he’s a victim of Pep Roulette – a game where even Sergio Aguero (£12.2m) and Raheem Sterling (£12.1m) are casualties. The Algerian was taken off after 59 minutes against Wolves, missed out entirely at Crystal Palace but played all 90 minutes against Atalanta while Bernardo Silva (£7.9m) watched from the bench. Perhaps that’s a bad sign for Saturday lunchtime but nobody really knows. What we do know, however, is that his five starts have produced two goals and five assists.

De Bruyne is trusted with the captain’s armband, probably because he’s the most secure starter of City’s premium three. He only blanked at Selhurst Park because Gabriel Jesus (£9.5m) decided not to square a chance to the Belgian and his open goal. Sterling scored a hat-trick on Tuesday and was praised for his fitness post-match by Guardiola: “He’s a guy whose physicality is incredible. He is strong. The day after a game, he could play another game. His regeneration is incredible; he can play both sides. He is an extraordinary player.” Expect Sterling to be rested, then.

There’s 7 players priced £10m or above in FPL. Since GW7, only one of them (Sadio Mané) has scored a goal.

Aguero also played the full match and there are concerns that Jesus will rotate in again – where he tends to score. A grain of hope for Aguero owners is that he has been benched for three of their five away games but has started all four home games. Their next two games are at home. Also, his xG (expected goals) tally of 6.14 is still comfortably ahead of anyone else in the league, despite such limited minutes.

Perhaps a rest is imminent for Mount. The youngster with four goals has already risen 0.8m in price but was replaced as Chelsea were searching for a goal against resilient Newcastle. He was out-shone by Callum Hudson-Odoi (£6.0m) and, in fact, swapping from Mount to Hudson-Odoi is this week’s sixth most frequent midfield transfer. Up front, the clinical Jamie Vardy (£9.1m) continued to defy his xG stats (0.15 here) by scoring against Burnley. He is up against the only striker to score in each of the past three Premier League games, Danny Ings (£5.9m), who picked up an impressive seven bonus points in the process. Southampton have scored in all 16 home games since Ralph Hasenhuttl took charge. 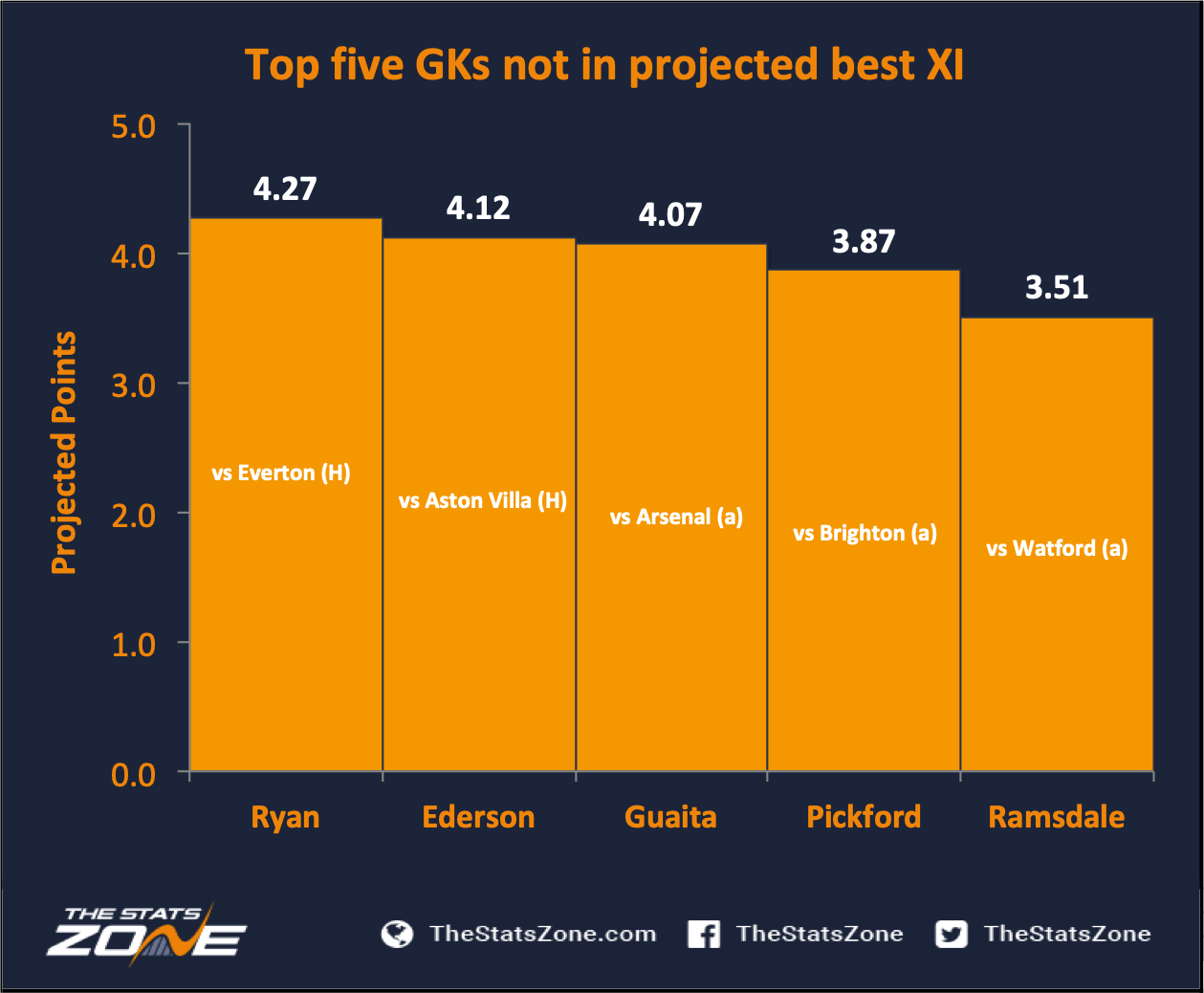 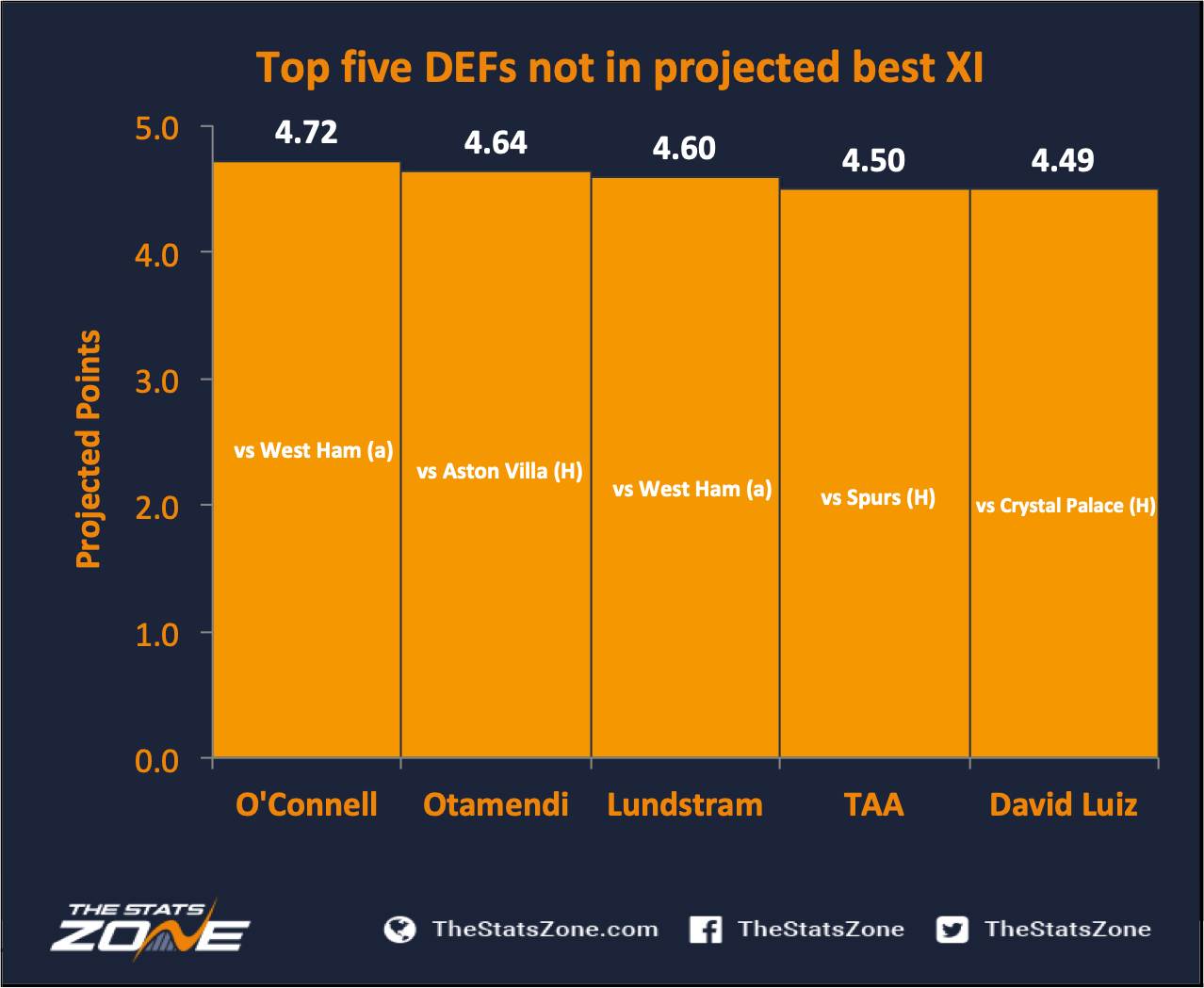 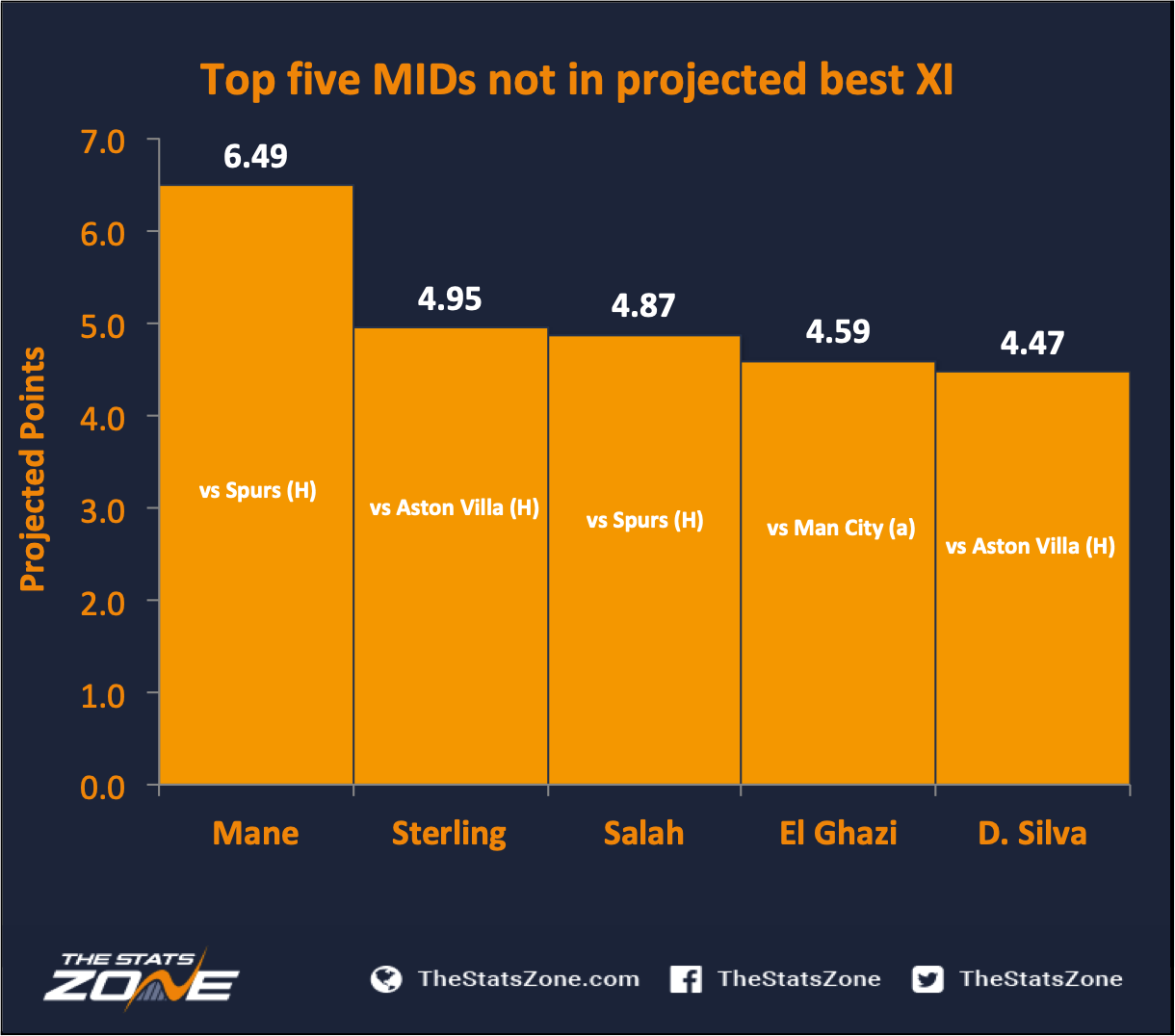 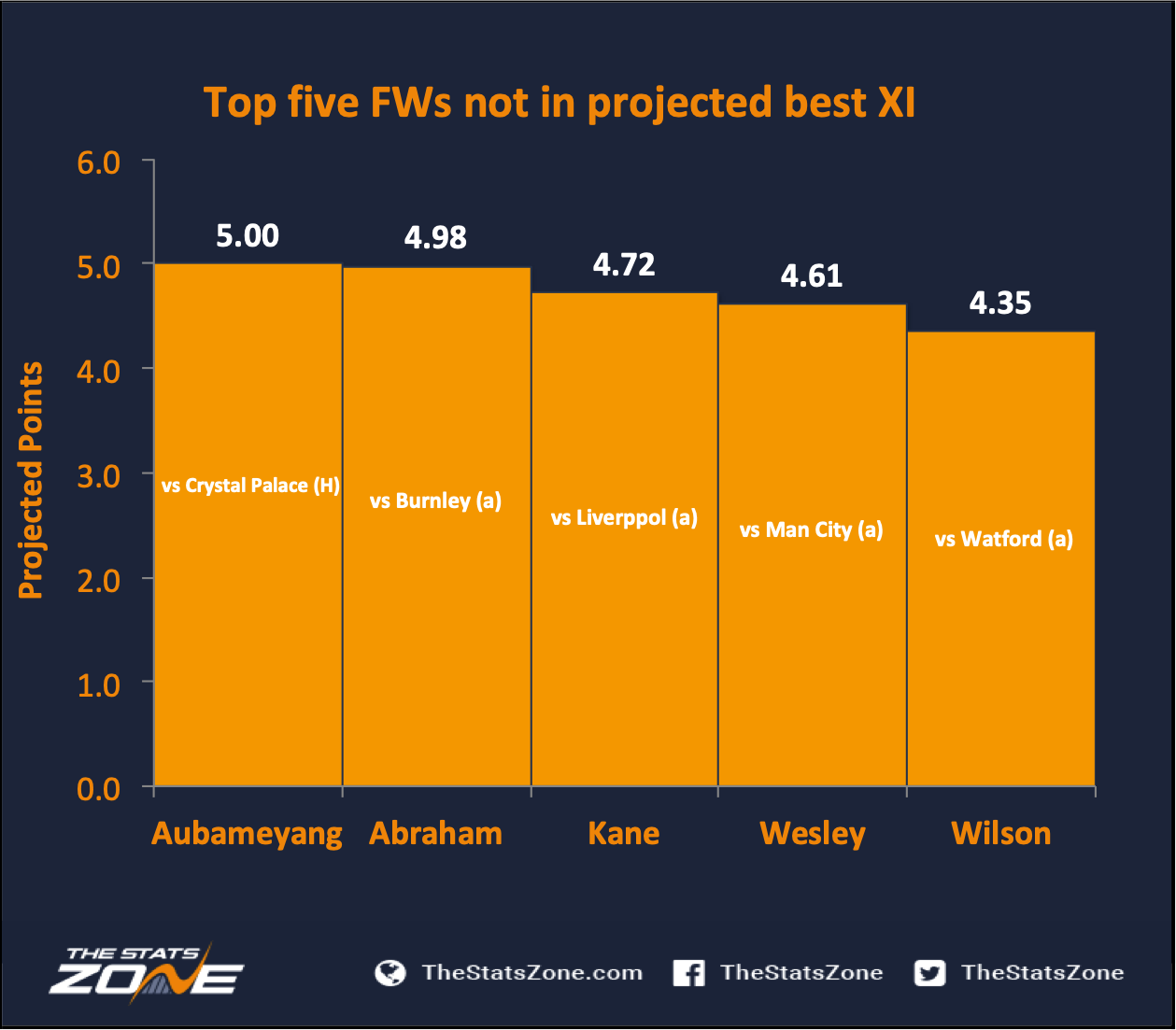