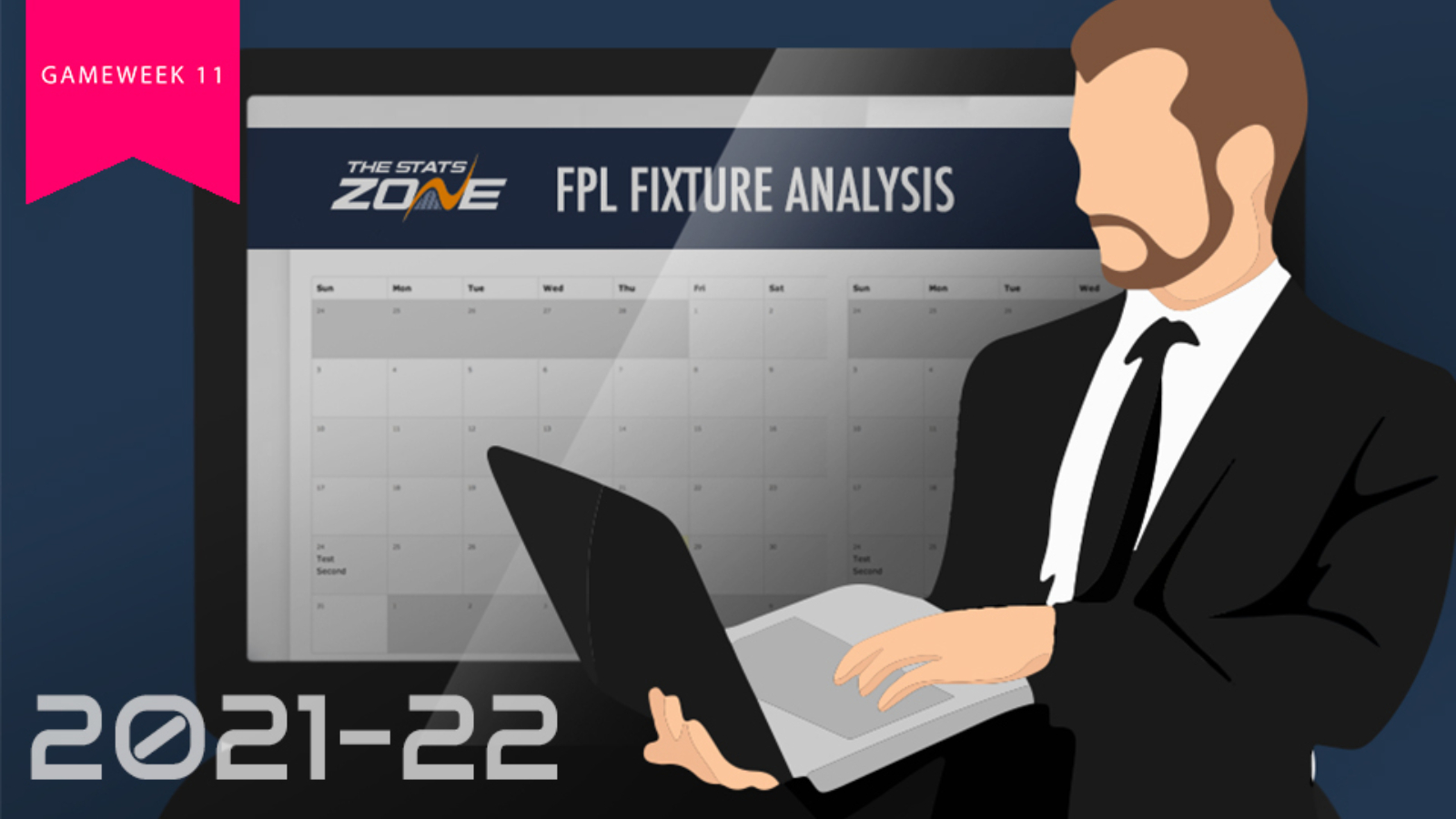 Gameweek 11 was packed full of surprises with a number of title contenders dropping points and perhaps most surprising of all, Mo Salah (£12.9m) did not get on the scoresheet. The Egyptian did pick up an assist for Liverpool’s opening goal against Brighton, however the Reds did not go on and record victory, with the Seagulls earning a 2-2 draw at Anfield, with goals from midfielders Enock Mwepu (£5.9m) and Leandro Trossard (£6.4m). Liverpool’s Sadio Mane (£11.9m) was sure to remind folk of his FPL credentials, netting his sixth league goal of the season. Man City fared even worse, as Pep Guardiola’s men went down 0-2 at home to Crystal Palace with the sending off of defender Aymeric Laporte (£5.5m) a key factor in the contest. Wilfried Zaha (£6.9m) and Conor Gallagher (£5.7m) were on the scoresheet for the Eagles, with the latter having now racked up three goals, four assists and 51 fantasy points over the course of the season so far, the fifth highest FPL score among midfielders.

I’ve played Conor Gallagher the past 3 Gameweek & he’s blanked in all three. The ONE game I bench him, he gets a goal and an assist. I can’t be arsed with this game 😭😭 #FPL

However, there was no such shock at St. James’ Park as Chelsea eventually dispatched Newcastle by three goals to nil. Defender Reece James (£5.8m) maintaining his excellent goalscoring form with a brace and 21 FPL points. Cristiano Ronaldo (£12.4m) scored the opening goal for Man Utd as they brushed Spurs aside 0-3 in North London with Edinson Cavani (£8.4m) and Marcus Rashford (£9.4m) also finding the net. This result not only eased the pressure on United manager Ole Gunnar Solskjaer, but also saw Spurs boss Nuno Espirito Santo promptly sacked two days later.

Save himself by beating Spurs, get Nuno sacked and take his likeliest replacement off the market (Conte) - Solskjaer is playing 4D chess #MUFC

We now look towards Gameweek 11, the final round of fixtures before the next international break and pour over those encounters that should prove lucrative from an FPL point of view, picking out some key players in the process.

CONTE A GOODISON OMEN FOR KANE

Following Nuno Espirito Santo’s sacking, Spurs have wasted little time installing Antonio Conte as their new manager. The Italian is a former Premier League winner with Chelsea and most recently ended Juventus Scudetto dominance, securing Internazionale’s first Italian league title since 2010. A serial winner, if anyone can get the best out of this Spurs side, Conte can and a revitalised team is expected on the pitch in Gameweek 11 against Everton. Forward Harry Kane (£12.1m) has scored just once in eight Premier League starts this season, but it would be no surprise to see him back among the goals under Conte and specifically away at Everton. Kane’s last four visits to Goodison Park in all competitions has seen him find the net seven times and he’ll be looking to continue that run against a Toffees side that shipped five goals against Watford in their most recent home game.

Conte’s teams are known to score the most goals in a given campaign (Inter, Chelsea, Juventus) and he utilizes strikers quite frequently. The focus of attacks is on team play and getting the ball to the eighteen yard box where the lethal strikers finish the job. Kane? 6.4% owned https://t.co/37AooNrqaS

Also hoping to be in among the attacking returns will be midfielder Heung-Min Son (£10.2m), who already has four goals, two assists and 55 FPL points to his name so far this season. A key figure of Conte’s successful spell at Chelsea was his utilisation of wing-backs. Players such as Victor Moses and Marcos Alonso became FPL points magnets due to their accumulation of both clean sheet bonuses and attacking returns. With that in mind, the likes of Sergio Reguilon (£5.0m) and Matt Doherty (£4.7m) are two players who could play a huge part in Conte’s teams going forward and are worth serious considering from an FPL perspective, although be aware that latter is yet to start a single Premier League fixture this season.

CHELSEA FULL-BACKS TO FEAST ON BURNLEY

The last time Chelsea faced Burnley at Stamford Bridge, they were victorious by two goals to nil with both goals coming from full-backs in Cesar Azpilicueta (£6.0m) and Marcos Alonso (£5.6m). Fast forward to the 2021-22 campaign and it would be no surprise to see a similar pattern emerge here in Gameweek 11 as the Clarets travel to a Chelsea side who have won their last four Premier League games with at least one full-back scoring in each of those fixtures.

The man currently in position of the role is Reece James, who has been fielded as a right-wing-back in both Gameweeks 9 and 10. James has shone in the role, scoring three goals, keeping two clean sheets and accumulating 34 FPL points. On the opposite side, Ben Chilwell (£6.0m) has started the last four gameweeks, accruing three goals, four clean sheets and a whopping 43 fantasy points. Both have the potential to rack up major hauls in Gameweek 11 with Chelsea’s defence likely to prove as solid as ever and both wing-backs expected to attack whenever possible. However, Thomas Tuchel’s tendency to rotate could burn FPL managers here with club captain Azpilicueta expected to come back into the starting line-up sooner rather than later. The Spaniard replacing James in Gameweek 11 would be incredibly frustrating, but not surprising when considering Tuchel’s ‘tinkerman’ tactics. On a positive note, James being afforded a rest and Azpilicueta starting in Chelsea's midweek Champions League clash away at Malmo, bodes well for those who own James.

LAST CHANCE FOR BEES’ TONEY TO CREATE A BUZZ

Brentford fell to a disappointing 3-1 defeat away at Burnley in Gameweek 10 and once again, star forward Ivan Toney (£6.6m) failed to get on the scoresheet. The 25-year-old has now failed to score for the Bees in the Premier League across the last five gameweeks and FPL managers who brought Toney in for his favourable upcoming fixtures are starting to get twitchy. The visit of rock-bottom Norwich to West London in Gameweek 11 represents somewhat of a last chance saloon for the striker to prove himself as a viable FPL asset.

Toney has 3 open play goals in last 23 league matches but ..... He faces Norwich & Newcastle next. https://t.co/r9WTpDhfji

Norwich has shipped 25 goals so far this season, the most of any side in the Premier League and Brentford should be afforded numerous chances here with home advantage in their favour. Not only is Ivan Toney an enticing fantasy option (for now anyway), so too is Bryan Mbeumo (£5.4m) who is listed as a midfielder on FPL despite playing mainly as a striker. An injury saw Mbeumo remain on the bench against Burnley, but the Frenchman is expected to take his place back in the starting line-up against the Canaries and his ownership could well profit. From a defensive perspective, a long-term injury to David Raya brings to the table a cheap goalkeeping option in Alvaro Fernandez (£4.5m) who will be hoping to keep a first Premier League shut out against a side who have failed to score on their travels so far this season.