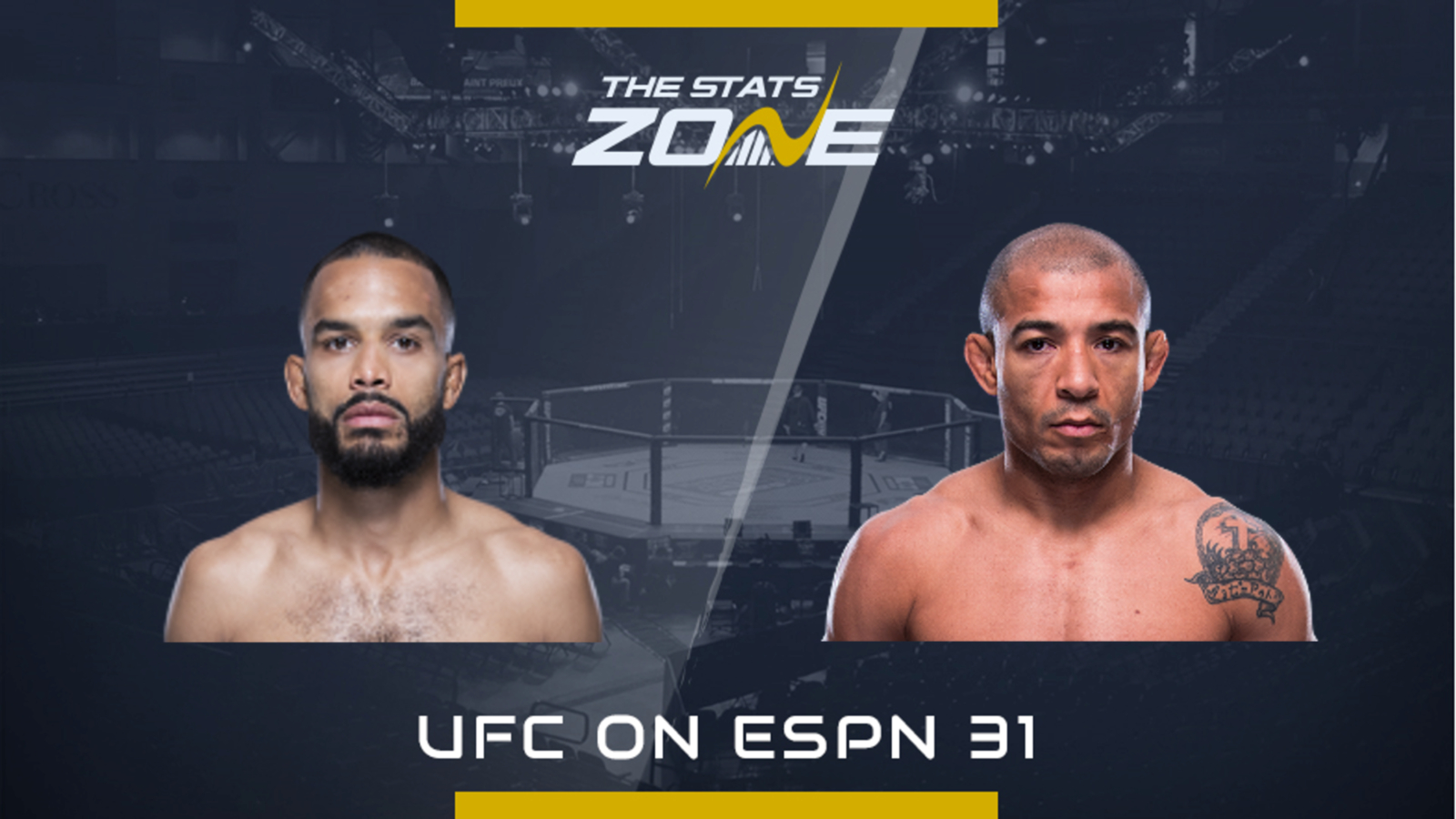 Where is UFC on ESPN 31? UFC APEX, Enterprise, Nevada (US)

Where can I get tickets for UFC on ESPN 31? Click here for the latest ticket information for UFC events

Where can I stream UFC on ESPN 31? BT Sport subscribers can stream the fight online via the BT Sport website

Rob Font (19-4) has quietly climbed up the ranks of the bantamweight division which is the most stacked it has ever been. He lost some momentum after getting submitted by Pedro Munhoz (2017) and losing a unanimous decision to Raphael Assuncao (2018) before he cleaned up Thomas Almeida (2018). However, he has gone on a tear since earning unanimous decisions over Sergio Pettis (2018) and Ricky Simon (2019), knocking out Marlon Moraes (2020) and now he is coming off a classy unanimous win over the former champion Cody Garbrandt back in May.

The former featherweight king Jose Aldo (30-7) heads to the APEX for his 19th UFC fight and eighth main event. The legend is on a mission for more gold and although it seems out of reach especially after already getting finished by Petr Yan (2020), he is still elite. He bounced back from a three-fight skid including his first two fights at 135 lbs. His first fight was a controversial split decision to Moraes (2019) which he should have won and then lost the title fight to Yan. He has bounced back with unanimous decisions over Marlon Vera (2020) and Munhoz (2021) and another over Font will push him closer to top of the division with the other young guns.

Font’s brown belt and Aldo’s black belt in Brazilian jiu-jitsu will be left ringside for this one where they will put on a striking spectacle. They match-up very similar physically and are expected to engage in a violent war on the feet.

This is another five rounder for Aldo and although he prefers three rounds, he has all the championship experience with 15 title fights in the bank. Font has only been five rounds once in his career which was his fight with Garbrandt where he proved he is made for 25-minute battles.

Aldo needs to call upon all of his experience and treat Font like a title challenger. He possesses the speed and power advantage over Font and needs to manage the rounds unleashing at the right moments.

The key for Font is to keep up a suffocating pressure to break Aldo down like Holloway, Volkanovski and Yan did. Expect him to begin by pumping out his strong jab which will inevitably land. Aldo has exceptional head movement, but Font has one of the best jabs in the division.

Aldo needs to dig out his leg kicks again. They are lethal and he will not need to land many to slow Font down himself which will be crucial as we expect Font to grow stronger in each round. We also expect Aldo to target the body, throwing lightening combination before stepping back out of range.

They have the ability to find the knockout but also have the technique and durability to drag this to the bell. Aldo can sway the judges with his power landing the more significant strikes, but we have a feeling Font will bring an even more improved version of himself and earn the points with his jab and volume.