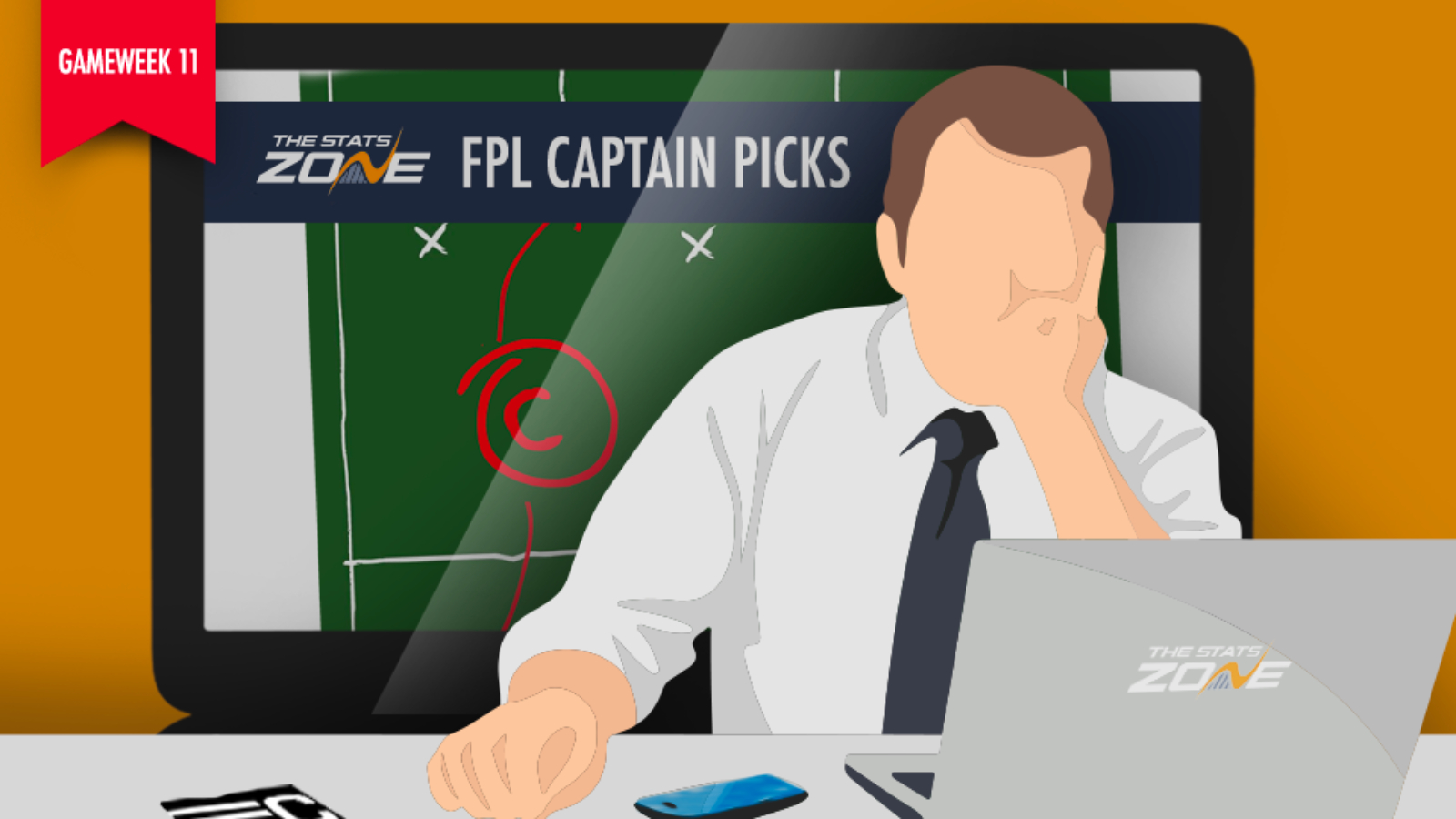 After the dearth of FPL points in Gameweeks 8 and 9, the start of Gameweek 10 saw Leicester smash Southampton 0-9 – a result that essentially prevented another low weekly average score. The Foxes were rampant on the South Coast as both Jamie Vardy (£9.3m) and Ayoze Perez (£6.1m) notched hat-tricks and 20 points for their owners. With Vardy leading the way, it was a good week for our GW10 captain choices as both Mo Salah (£12.4m) and Man City (yes an entire team was picked) also produced returns in addition to the Leicester centre-forward.

No chill from Leicester City this weekend. Can you risk not having their FPL players? pic.twitter.com/vrXHqEiiIt

The two failures from last week’s captain picks were Arsenal’s Pierre-Emerick Aubameyang (£11.1m) and differential option Callum Hudson-Odoi (£6.0m). The return of Alexandre Lacazette (£9.3m) continues to raise doubts over the viability of captaining Aubameyang, as the Gabonese international scored two points for the third time in succession. Priced at £9.3m, Lacazette could actually represent the better option of the two for any FPL managers brave enough to go near the horror show that is Arsenal.

What is everyone doing with Aubameyang? Fixtures good but Arsenal 🤮 pic.twitter.com/UbUnaH557Q

For Hudson-Odoi, it was a bittersweet benching as his zero points meant our very own TSZ staffer @TrystanPugh now finds himself at the bottom of our differential league. Hudson-Odoi’s replacement against Burnley, Christian Pulisic (£7.1m), naturally went on to score a hat-trick and as such left CHO's 120,000 new owners in a state of purgatory over whether he’ll start Gameweek 11 or not. Trystan meanwhile has cut a disconsolate figure in something analogous to a fugue state. Anyway, onto the potential captain options ahead of Saturday’s 11.30pm deadline.

Another gameweek brings another attempt to predict which of Man City’s assets will make the best choice for the captain’s armband. Last week’s article saw a plethora of options discussed ahead of the match against Aston Villa, headlined by "he always starts at home" Sergio Aguero (£12.2m). With Pep crushing that line of thought with all the finesse of a sledgehammer to a walnut, it’s hard to justify going back to that well. Instead, those City players who seem more likely to start will be discussed – Kevin De Bruyne (£10.2m), Raheem Sterling (£12.1m) and David Silva (£7.7m).

Anyone of Man City’s three midfielders represents an excellent option for captaincy in Gameweek 11. Firstly, City are set to play Southampton who, as mentioned previously, just conceded nine goals to Leicester. In the equivalent fixture last season, City ran out 6-1 winners. Sterling was the standout performer on that day, recording two goals and two assists. D. Silva also grabbed a goal, while De Bruyne was out injured.

Southampton have conceded 6 goals in 5 away.

I had been tempted to Triple Captain Sterling or KDB (I always use TC in a SGW), but may hold off.

Only 3 home fixtures stand out for a City player to TC to me :

Can you look past KDB as captain?

Another potentially interesting option from Man City is full-back Benjamin Mendy (£5.9m). Having now started the last three matches in all competitions, Mendy appears to be over his troublesome knee injury that saw him miss much of last season. Although still yet to secure any attacking returns, the Frenchman was an absolute monster going forward last season. Six assists in just ten games meant the full-back was close to a must-have during the period he was fit in 2018-19.

Pep Guardiola : 'With Mendy there is a special quality that only he has in our team. With Zinchenko we cannot attack wide and deep.'#FPL #FPLCommunity pic.twitter.com/kUvLCjZj0D

The point-scoring machine that is Harry Kane (£10.8m) kept chugging along, as this week he scored inside a minute at Anfield. The problems surrounding Tottenham and lack of big point scores have masked the fact that Kane has scored six goals, registered one assist and is averaging 5.5 points per appearance. While FPL managers will rightly want, and expect, more from a player who costs £10.8m, what Kane does offer is consistency and reliability. The Spurs forward is guaranteed starts and rarely goes more than a match without scoring. At some point he will also fire in a hat-trick out of nowhere and the GW11 fixture against Everton could be the time when it happens.

For those looking to get rid of Aguero, how about a straight swap to Kane?? 🤔 💭

Kane’s record against Everton is up there with one of the best going. In nine appearances against the Toffees, Kane has nine goals but the Spurs frontman has scored two goals in each of his last FOUR league matches against Everton. In fact, the last time Kane didn’t net a brace when playing against Everton was August 13th, 2016. During that four-game span, he has scored 54 points at an average of 13.5 per appearance and hasn’t notched less than 13 points in a single match.

Having Aguero in your team probably equates to having Harry Kane. So why not just own Kane and be rid of the headache? pic.twitter.com/gOtCjka8gN

With an enticing fixture against Watford in Gameweek 11, Tammy Abraham (£7.8m) has been more steady than explosive in the last five gameweeks. Just a solitary goal and single assist has come during that five gameweek span, as the double-digit point hauls that marked the Englishman’s early season have dried up. That slight barren spell should end though against Watford. Chelsea have scored 16 goals in the last six league meeting between the two sides, while Abraham has only failed to deliver attacking returns in one away match this season – the GW1 defeat at Old Trafford.

These are definitely not the stats of a guy I’d even consider selling right now.

While captaining Abraham may not be as enticing as a Man City asset, what the Chelsea forward does offer over those players is the security of starting. Abraham has not missed a match so far the season. Still, most FPL managers will be swayed by Man City’s fixture and therefore Abraham could make sense as a vice-captain option, particularly for those managers (all managers) who have already been burnt by Pep this season.

There is a case to be made for the armband to be put on a number of Liverpool players for their upcoming Gameweek 11 match against Aston Villa. Mo Salah (£12.4m), Roberto Firmino (£9.5m) and even Trent Alexander-Arnold (£7.2m) are all attractive propositions given the fixture but a combination of injury concerns, explosive potential and Liverpool not keeping clean sheets has means that Mane gets the nod.

Why don't more people own both Mane & Salah?

We don't need to see a teamsheet to know if they're playing & when there is a goal, 1 or both are likely to be involved.

As it stands, Sadio Mane is the top FPL scorer from the red side of Merseyside. Having won the penalty last time out against Spurs, the Senegalese international will be chomping at the bit to get back amongst the goals this weekend. He will no doubt be afforded every opportunity to do so against an Aston Villa side that are conceding an average of 18.8 shots per game – the most of any team in the Premier League. Plus, everyone knows that if Salah scores one week, then Sadio Mane (£11.9m) is going to net the week after.

While the second most popular defender can’t be considered a differential choice based on ownership, it is doubtful that too many FPL managers are thinking of throwing the armband on the Sheffield Utd ‘defender’. That said, John Lundstram (£4.7m) is an interesting captaincy option ahead of Gameweek 11. Classed as a defender but playing as a box-to-box midfielder, Lundstram offers the dual threat of four points for a clean sheet coupled with attacking returns.

I was waiting for the % to write an unpopular opinion: Lundstram is a decent differential captain option.

The logic is not working with the captaincy this season, so why not trying something different?#FPL #FPLCommunity https://t.co/3NaAOfORdo

Sheffield Utd currently boast the joint best defensive record in the Premier League and have already kept two clean sheets in front of their own fans. Burnley meanwhile has only scored six away goals all season and average just 3.4 shots on goal per away match. With a goal and an assist to his name, Lundstram’s potency going forward has already been on display, while there is always the chance of bonus points which further inflate his base score.