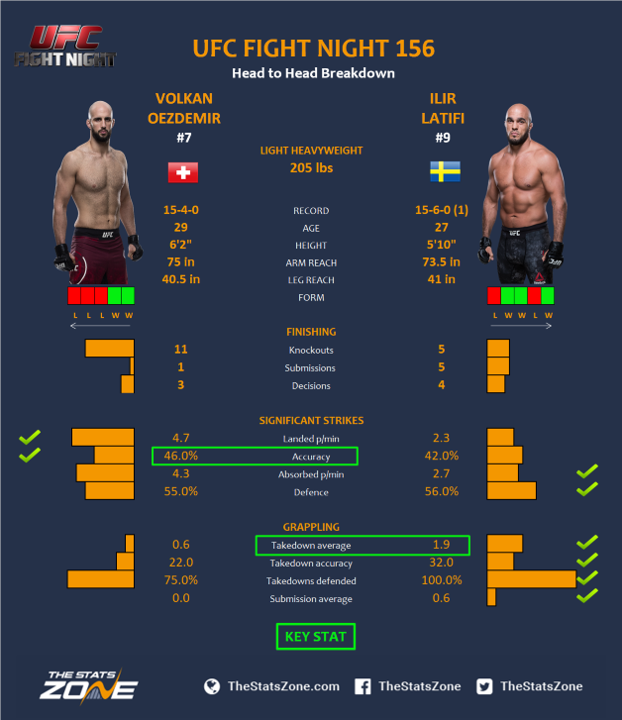 This exciting scrap fell through at UFC Fight Night 153 due to Ilir Latifi suffering a back injury just two days prior, much to Volkan Oezdemir’s disappointment. Fortunately, it has been rescheduled but, instead of Sweden, they head to Uruguay for the UFC’s first visit.

Oezdemir is under a mountain of pressure at the moment and hoping to prevent a four-fight skid. On his rapid rise to the top of the division he earned a title shot against Daniel Cormier and got a taste of championship level fighting and wrestling. This loss wasn’t a surprise but he went on to get submitted by Anthony Smith and then miss out on a close decision to Dominick Reyes. These fights were closer, especially Reyes where many believed Oezdemir did enough to earn the points himself and now he has another test in a tough stylistic match-up.

Latifi is coming off a decision loss of his own to Corey Anderson after two impressive wins over Tyson Pedro and Ovince Saint Preux. This was a disappointing performance as he had all the tools to beat Anderson but gassed out, leaving the door open for the cardio machine to control the last two rounds.

Latifi is a devastating striker but will have to be cautious standing in front of Oezdemir who will look to use his reach advantage and remind everyone of his one-punch knockout power.

Latifi will be wise to enforce his grappling and look at Oezdemir’s fight with Daniel Cormier as a blueprint to find a finish. He may try and chop him down with leg kicks but ultimately close the distance and exploit Oezdemir’s weakness on the floor.

However, Oezdemir only needs one opportunity to end the fight and if it goes past the first round he will be even more dangerous as Latifi begins to fade. Latifi is durable but if his defence begins to slack, Oezdemir will capitalize in devastating fashion.