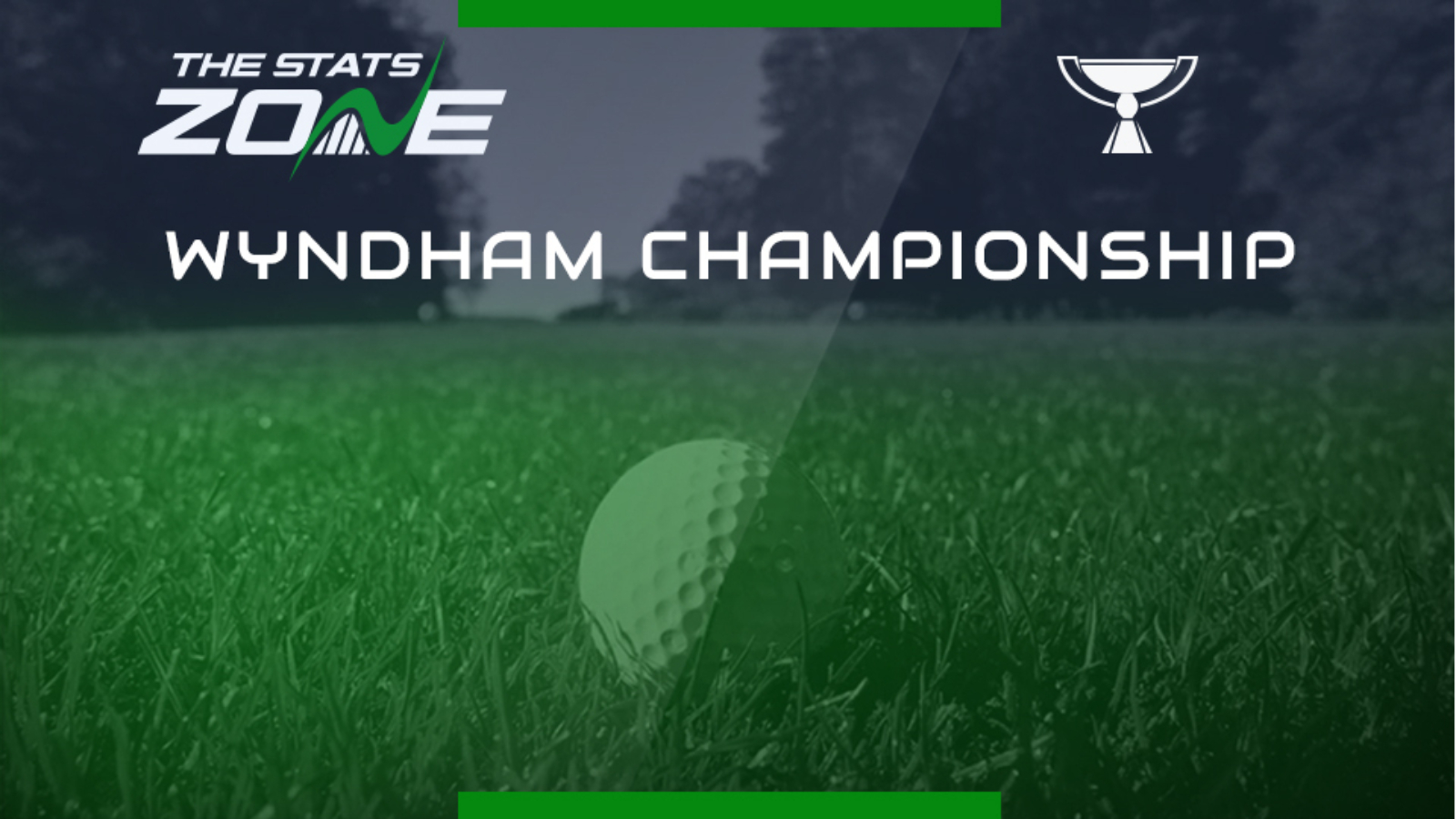 When is the 2019 Wyndham Championship? Thursday 1st to Sunday 4th of August 2019

What television channel can I watch the 2019 Wyndham Championship on in the UK? Sky Sports Golf

Where can I stream the 2019 Wyndham Championship in the UK? Sky Sports subscribers can stream the tournament online via Sky Go

Where can I get tickets for the 2019 Wyndham Championship? https://www.pgatour.com/tournaments/wyndham-championship/tickets.html

What is the course yardage at Sedgefield Country Club (Ross Course)? 7,127 yards

What is the par at Sedgefield Country Club (Ross Course)? 70

What is the course information for Sedgefield Country Club (Ross Course)? Built in 1925, the course features Donald Ross’ signature rolling fairways that lead to small, undulating greens and requires accuracy from the tee to afford many a birdie opportunity this week.

What is the predicted weather for the 2019 Wyndham Championship? Scattered thunderstorms predicted from Thursday afternoon onward which could cause some delays. Sunny spells in between predicted rain coming in with potential storms and temperatures around 24c for the week.

As the final event before the FedEx Cup playoffs, the Wyndham Championship will be the last opportunity for those currently ranked outside the top 125. Those on the cusp will be looking to cement their way into the playoffs while others will be aiming to gain as high a rank as possible before it all starts. 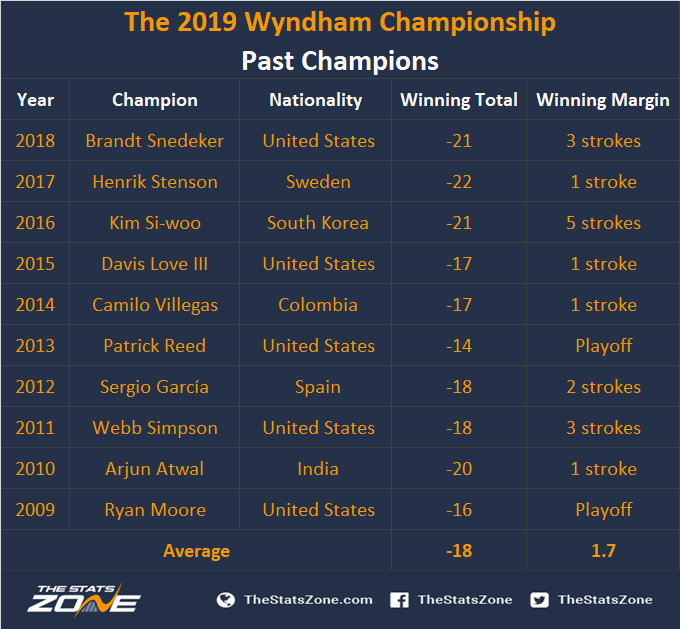 Scoring has been typically low around the Ross Course with an average winning total of 18 under par from the previous ten editions. 2017 champion Henrik Stenson recorded the tournament's lowest ever total score around the par 70 layout. Remarkably there have been just two playoffs since 1999 with the victor on average winning by 1.7 strokes.

The former U.S. Open champion heads to North Carolina straight off the back of a runner-up finish at last weeks WGC St. Jude Invitational where he shot a final round 64 to claim his second, second-place finish in his past four starts. With 11 top 25 finishes from 17 starts this season, the American is producing some of the most consistent form of his career, but with just one PGA Tour victory since 2014 he will be hoping to turn his strong form into a sixth victory. He’ll have a great opportunity to do so this week around a course he has only finished lower than T6 once since 2014. Ranked sixth in stroked-gained total shows that his all-round game is in great shape and with the added confidence of current and course form, this could be the week he propels himself towards the top of the FedEx Cup standings. 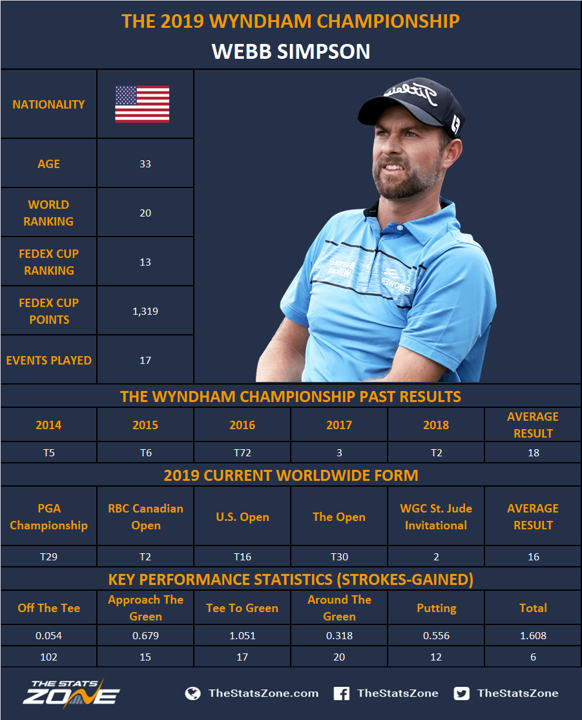 Snedeker returns to defend his title after becoming just the ninth player in PGA Tour history to break 60 en route to his victory last year. This was the American's second win in this tournament after winning in 2007 and with another victory here this week, he would become the joint second-highest multiple winner of the championship. Snedeker comes into the week with some solid form behind him having recorded his two highest finishes of the year during his previous six starts. A victory would all but cement his place in the Tour Championships – a tournament he won in 2012 – but he will have to improve drastically on both his off-the-tee and approach-the-green game where he ranks outside the top 100 in both strokes-gained. If he continues to hit the ball better tee-to-green, his short game and past course form could see him contend for a tenth PGA Tour title. 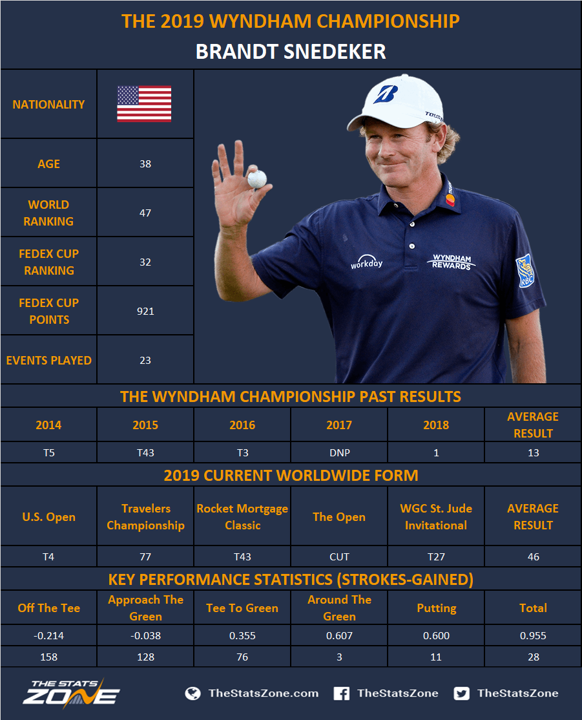 The former world's top ten player is coming into form at just the right time having recorded his highest two finishes of the season in his previous two starts, both of which could have been even higher if it wasn’t for two poor final rounds. He currently sits just inside the top 130 in the FedEx Cup and will need another strong finish this week to make it into the playoffs. Renowned as a world class ball-striker, the Swede has struggled this season with his strongest asset where he ranks 181st SG: approach the green, somewhat explaining his poor season so far where he has not recorded a top ten. If he is to keep his playing rights for the PGA Tour into next season, he will need to keep attacking and, as a player who is at his best when under pressure, expect him to continue his surge to be at The Northern Trust next week. 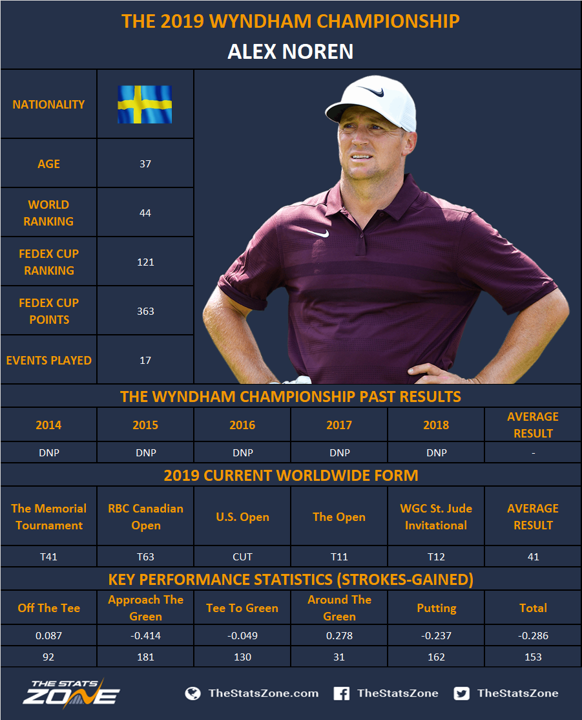 The former PGA Championship winner sits on the cusp of the playoffs at 132 in the FedEx Cup rankings in need of a solid performance to make it through to next week. The five-time PGA Tour winner has had a poor run of form in recent years having recorded just three top-ten finishes since his last victory in June 2017. Nevertheless, he placed himself in contention twice from four starts in recent months in which two poor finishing rounds cost him vital FedEx points. He is regarded as one of the best ball-strikers within the game, and this season is no different as he ranks 62nd SG: tee-to-green. Nevertheless, his Achilles heel, putting, continues to prevent him from succeeding where just 16 players on tour are ranked lower than him. A fourth top 25 finish of the season last week shows his game is in shape so expect him to produce the scores to achieve a top 130 spot. 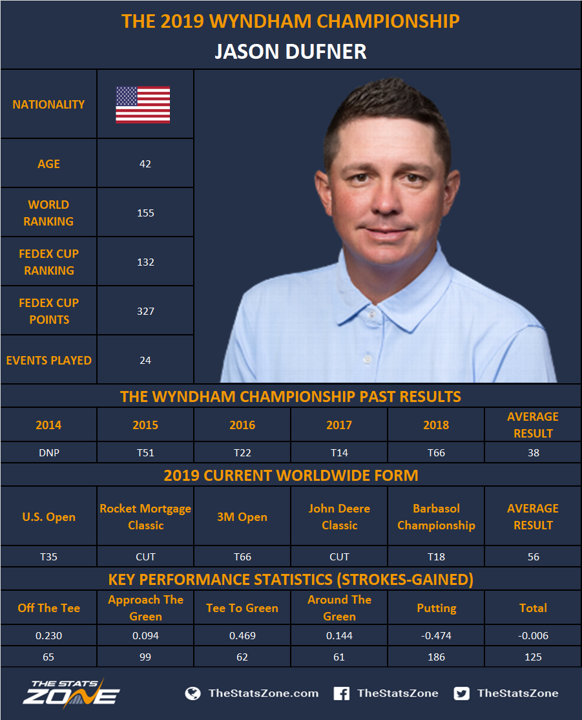 The 2011 FedEx Cup champion is another player who sits just outside the top 130 and will be desperate to make it into next week. The now 326th ranked player in the world has struggled with his game for the past two seasons, achieving just three top-tens since April 2018. However, he has shown promising signs in recent weeks having recorded back-to-back top 15 finishes, his two best results of the year so far. Moreover, he heads to a course he has performed well around since 2014, recording three top 25 finishes including a runner-up spot with an average result of 19th. Ranked 108th strokes-gained total shows why he isn’t producing the same type of golf as pre-2016, but with recent and course form considered, and the desire to be in the field for next week, expect a strong showing at Sedgefield CC. 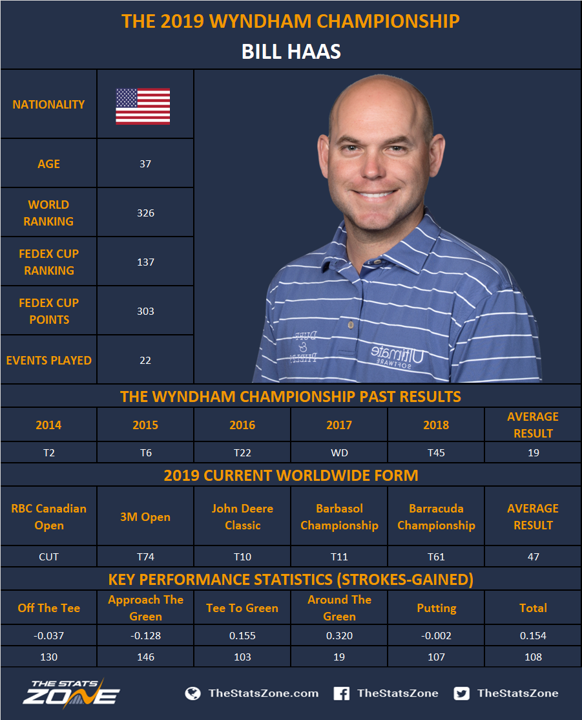