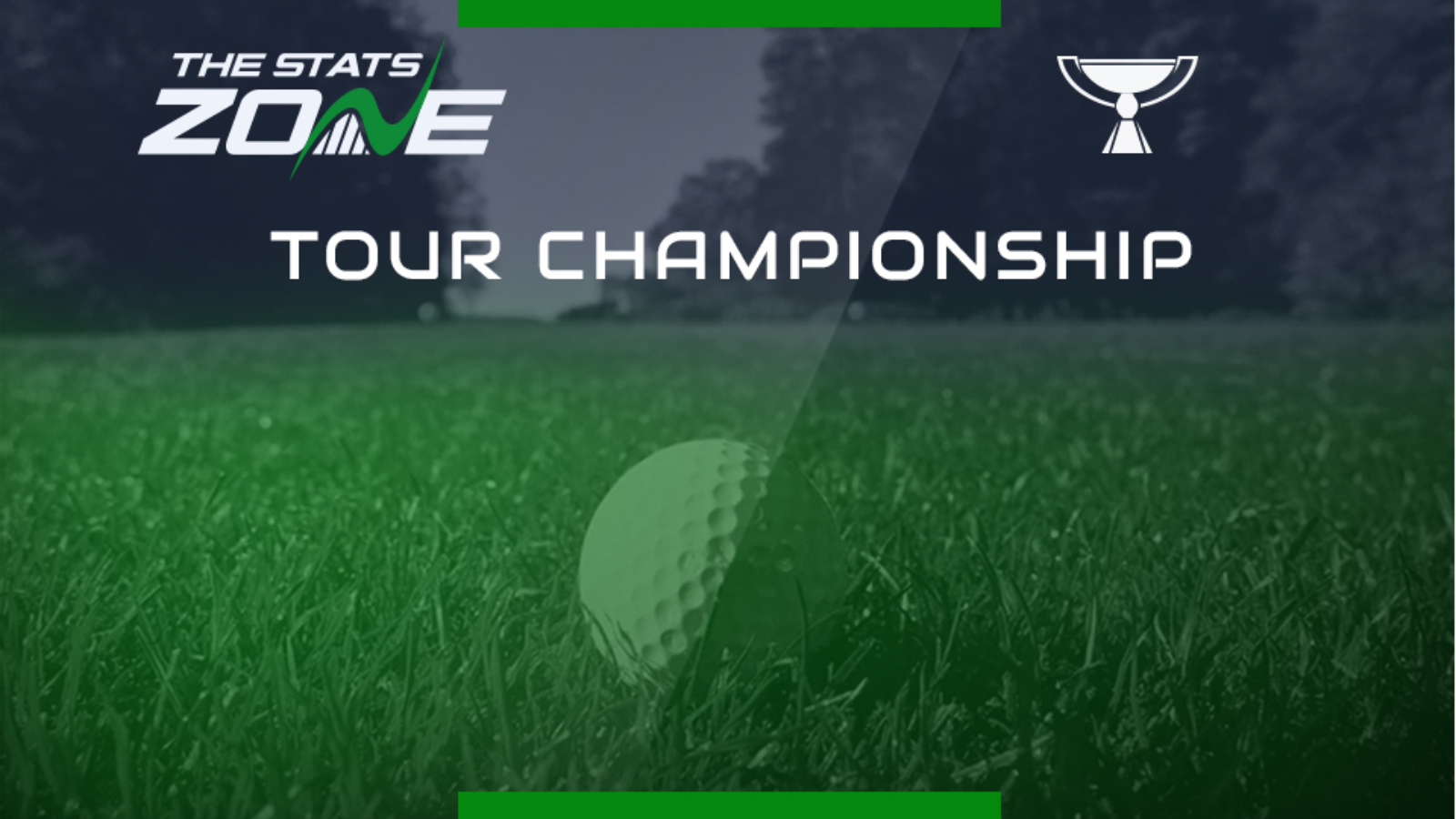 What is the total prize fund of the 2019 TOUR Championship? Every player who qualified for the FedExCup Playoffs will earn at least $100,000 with bonus money given to the top 10 individual players

What television channel can I watch the 2019 TOUR Championship on in the UK? Sky Sports Golf

Where can I stream the 2019 TOUR Championship in the UK? Sky Sports subscribers can stream the tournament online via Sky Go

Where can I get tickets for the 2019 TOUR Championship? https://www.pgatour.com/tournaments/tour-championship/tickets.html

What is the course yardage at East Lake Golf Club? 7,346 yards

What is the par at East Lake Golf Club? 70

What is the course information for East Lake Golf Club? Known for being the home course of the great Bobby Jones, East Lake has hosted the Tour Championship since 2004 but was first played here in 2008. As a long Par 70 layout for the professionals, East Lake typically plays tight with narrow a fairway and thick rough with an emphasis on ball-striking as the greens are relatively flat and receptive.

What is the predicted weather for the 2019 TOUR Championship? Scattered thunderstorms predicted throughout the four days which will likely cause delays at some stage of the tournament. Winds steadily low around 7 mph with temperatures consistent at 26c. 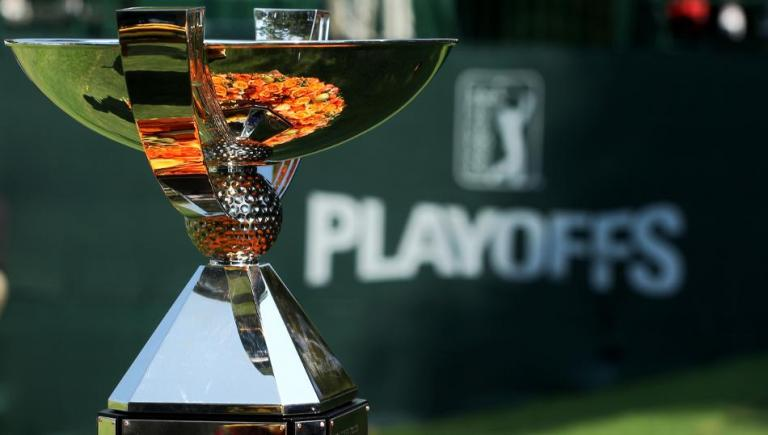 This year, the TOUR Championship’s final leaderboard will also represent the final FedEx Cup standings for the top 30 players meaning no more confusing projections or days when two players had to share the trophy ceremony on East Lake’s 18th green. Stroke play will be used to determine the champion of the PGA Tour’s season-long points race and the player who finishes the four rounds with the lowest score in relation to par will win the FedEx Cup. At the start of round one, the leaderboard will look as follows: 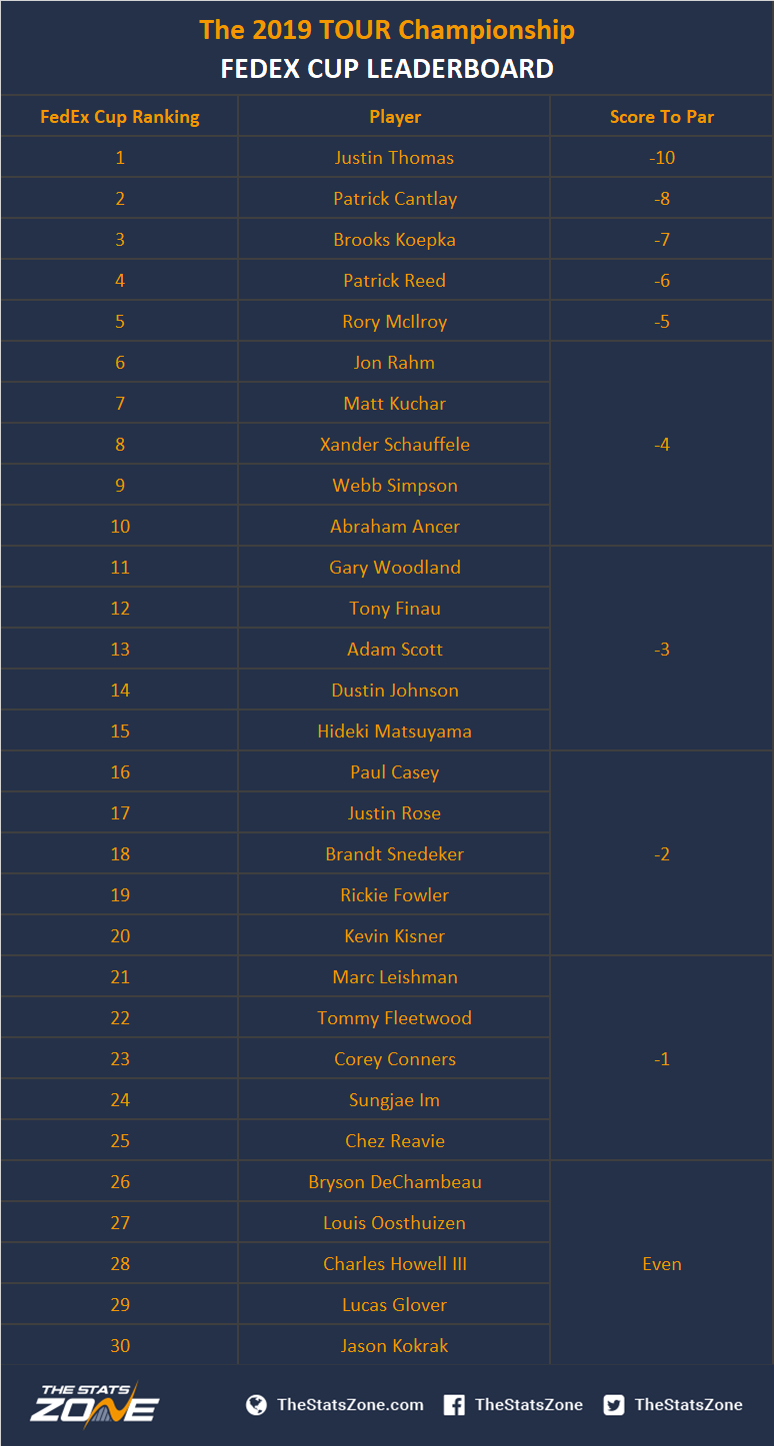 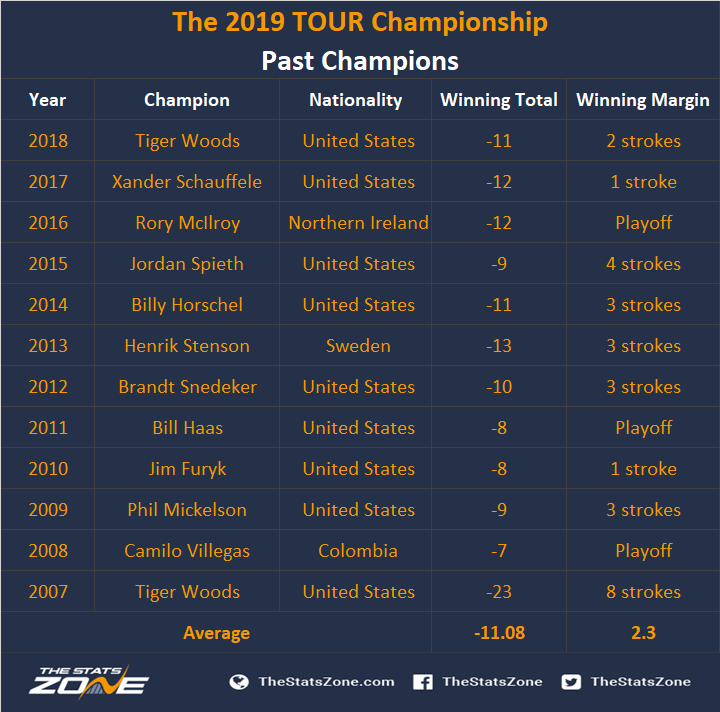 With an average winning total of -11 since the start of the FedEx Cup in 2007, scoring has been consistently high around the demanding East Lake. If it wasn’t for Tiger Woods’ commanding eight stroke victory and tournament scoring record in 2006 – beating the previous by six strokes – the average would be as low as -10. Previous champion and three-time winner Woods will not be defending his title this week due to missing out on the top 30 with Xander Schauffele, Rory McIlroy and Brandt Snedker having the opportunity of becoming just the third multiple winner behind Woods and Mickelson. With just three playoffs in total and an average winning margin of 2.3 strokes, the champion has often separated themselves from the field, making it a difficult course for others to chase on.

Last week’s BMW Championship victory was Thomas’ first win in just over a year and the 10th PGA Tour victory of his young career to date, showing his ability to close out when in the hunt. Still only 26, this will be his fourth straight appearance in the season finale with an average finishing position of fifth. Additionally, starting the tournament at the top of the leaderboard suggests he could be a very difficult man to beat around the East lake layout. Ranked second in both SG: approach the green and tee to green is a very strong combination around the difficult East Lake and although his putting – ranked 139th strokes- gained – is the only concern, after last week's display on the greens, his confidence will be at a level where he’ll expect to take the 2019 FedEx crown. 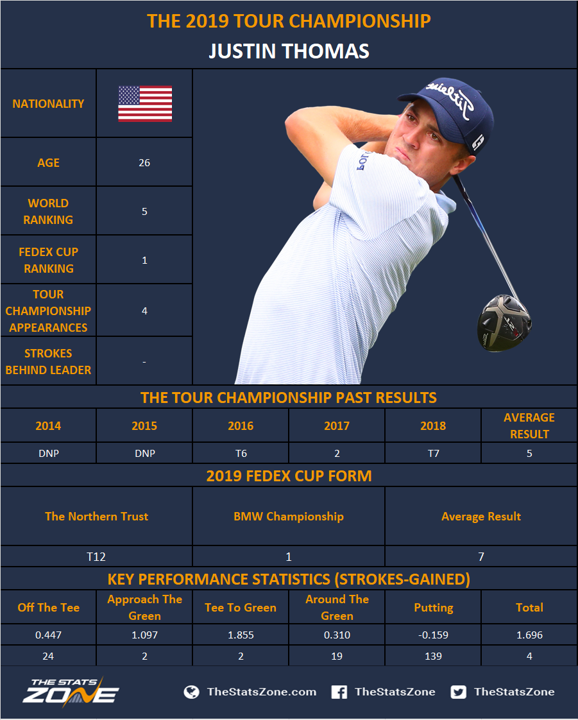 After a season of supreme consistency – 13 top 10s from 18 starts – McIlroy arguably deserves this year’s title. However, he simply has not been clinical enough when in contention and consequently starts five strokes behind from the outset. Ranked first in strokes-gained total with both his short game and his putting inside the top 30 shows why he is in contention so often and will likely be again this week. It will be his sixth appearance here and with an average finish of seventh, including a victory in 2016 and a runner-up finish in 2014, this is a course that will match McIlroy's game more than arguably anyone else in the field. Knowing he has nothing to lose and that he needs to claw back the strokes will set him off from the beginning in an attacking mode, something he does better than anyone, meaning if he gets on a run early in the week, he still has a great chance of claiming his second FedEx Cup crown. 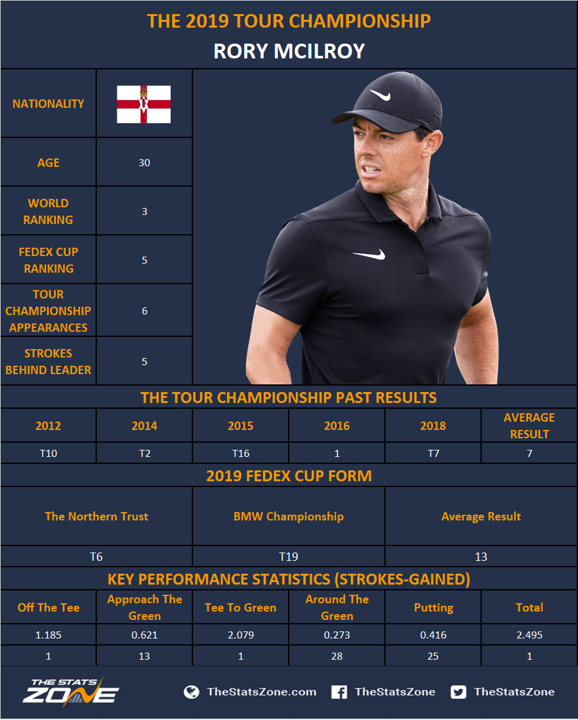 Koepka is arguably the player of the season again having recorded another major title, his first WGC and finished runner-up in two additional majors, further cementing his place as the world’s best player. This week will be approached with the same intensity as a major for Koepka and with just 30 players to beat with a starting advantage over most of them, he’ll very much fancy taking the title. With just one top-10 from his three starts around East Lake and an average finish of 27th from the first two playoff events, his course and current form doesn’t suggest he’ll be a main factor this week, but Koepka has the ability to take it up a level under the biggest of situations. His driving strength will be a big advantage around this layout and if he’s within touching distance at the start of the fourth round, he could well be the player to beat given the moment. 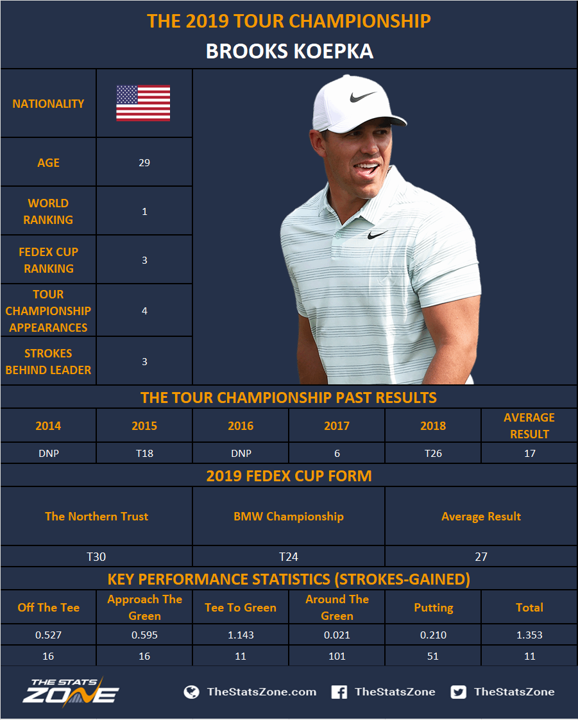 The 2017 Tour Championship winner makes just his third appearance here and is a firm favourite having finished no lower than seventh from two previous starts. Sitting six strokes behind will be difficult to make up on the leaders but his win earlier in the year saw him shoot 68 & 62 over the weekend, suggesting he has the capability to make a serious charge. With two top threes in the majors this year, he is a big-time player and his form is close with him being in contention after the opening two rounds during last week's BMW only to have a slow weekend. Ranked 13th in strokes-gained total shows there are no weaknesses within his game, resulting in the 25-year-old having a great chance to win his fifth PGA Tour tournament and the overall FedEx race. 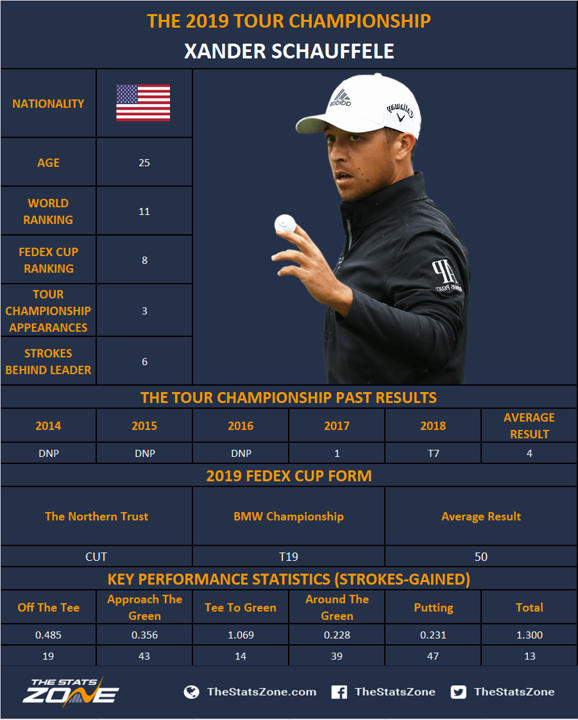 The Japanese superstar is finding his all-round game at just the right time in the playoffs after having a quiet year up until this point. Matsuyama is making his sixth straight start here and with two previous top-five finishes and an average position of 16th, this is a layout that fits his eye. Without a victory for the former world number two since 2017, he recorded his best finish since his last win with a third-place at last week's BMW Championship which included a pair of 63s. Ranked eight in SG: total but 100th in SG: putting shows how good the rest of his game is. However, he has increased from 123rd in SG: putting since the end of June suggesting he has found something on the greens that is rewarding his long game, meaning if he continues this trend, he could genuinely be a factor come Sunday afternoon, albeit starting seven strokes behind. 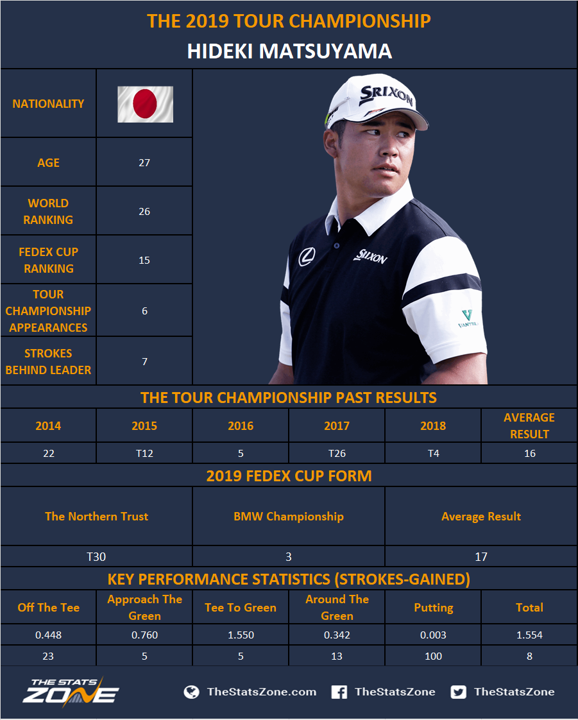