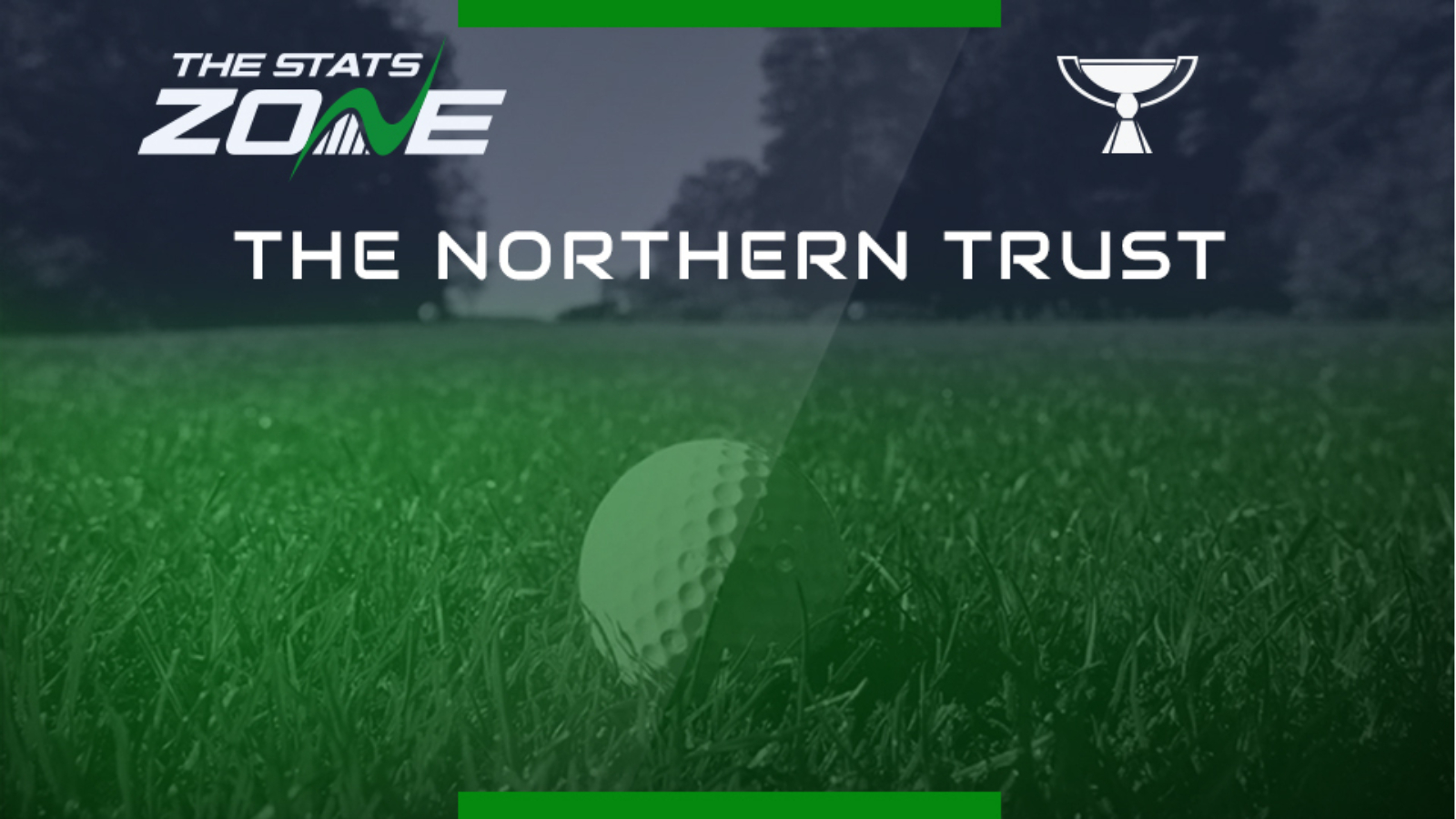 What television channel can I watch the 2019 Northern Trust on in the UK? Sky Sports Golf

Where can I stream the 2019 Northern Trust in the UK? Sky Sports subscribers can stream the tournament online via Sky Go

Where can I get tickets for the 2019 Northern Trust? https://www.pgatour.com/tournaments/the-northern-trust/tickets.html

What is the course yardage at Liberty National Golf Club? 7,370 yards

What is the par at Liberty National Golf Club? 71

What is the course information for Liberty National Golf Club? The site of Liberty National was – at times – an industrial wasteland, an oil refinery and even an Italian internment camp. Now it has the best skyline in sports with views of downtown New York City and the Statue of Liberty. A strategic layout dotted with manmade water hazards and unique bunkering ready for the world’s best players to climb the FedEx rankings.

What is the predicted weather for the 2019 Northern Trust? Partly cloudy during the opening day’s play with mostly sunshine for the remainder of the week. Low winds and temperatures around 26c make for ideal scoring conditions. 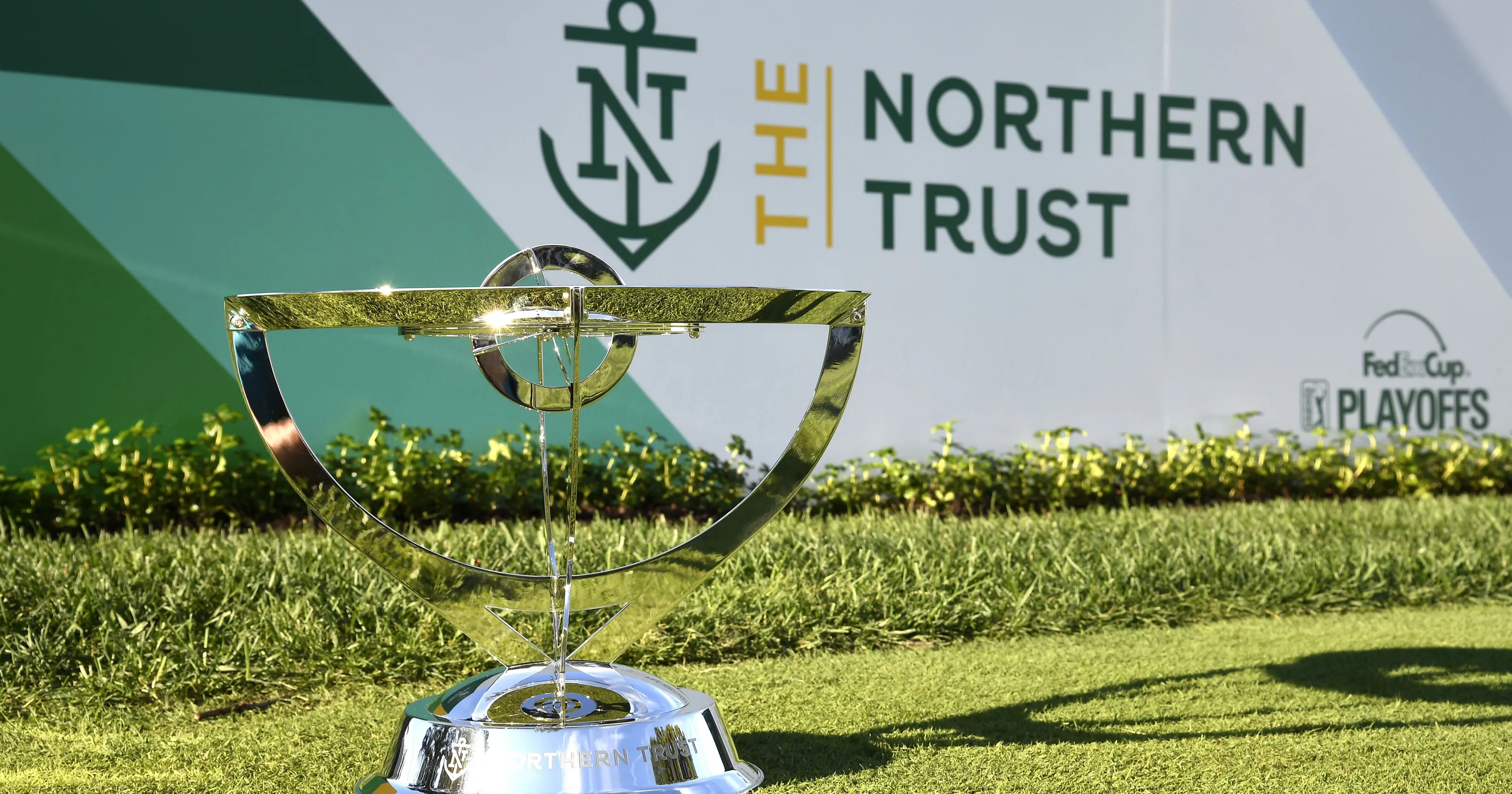 The FedEx Cup Playoffs begin with only 125 players now officially eligible to win the season long crown and the $15 million bonus that goes with it. With the Playoffs dropping from four to three events this season, only the top 70 players are eligible for the start at Medinah next week meaning 55 players face the chop at the conclusion of The Northern Trust. 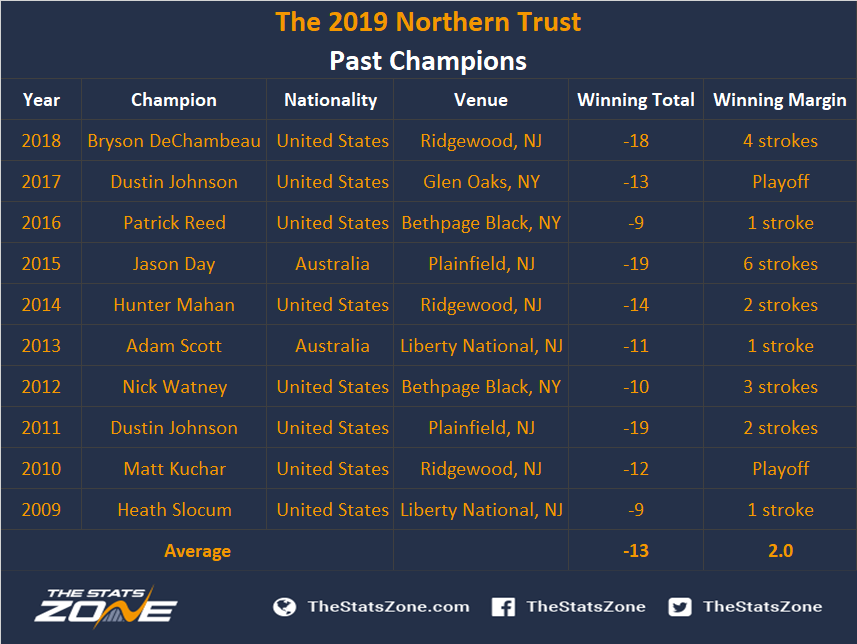 The Northern Trust – formerly The Barclays – has been played at five different venues over the past ten editions and returns to Liberty National for the first time since 2013 where Adam Scott was victorious. Naturally, the winning total has varied through the different courses, however scoring at Liberty National has been relatively high through the two editions with an average winning total of 10 under par.

As a former world number one earlier this year and defending FedEx Cup champion, the Englishman’s season has been somewhat quiet with just the one victory recorded at the beginning of the year. As ever though, Rose’s consistency has been exemplary, finishing inside the top 25 nine times from 14 starts this season including four top three finishes. Ranked 11th in the FedEx standings puts him in a great position to make a big move towards the top of the rankings with a high finish this week and having finished tied second here in 2013, his course knowledge and form will provide him with a great opportunity to contend. Ranked sixth strokes-gained total demonstrates his all-round consistency, but if he is to record a second victory of the year, he will need to be shaper around the greens where he currently ranks 101st SG. 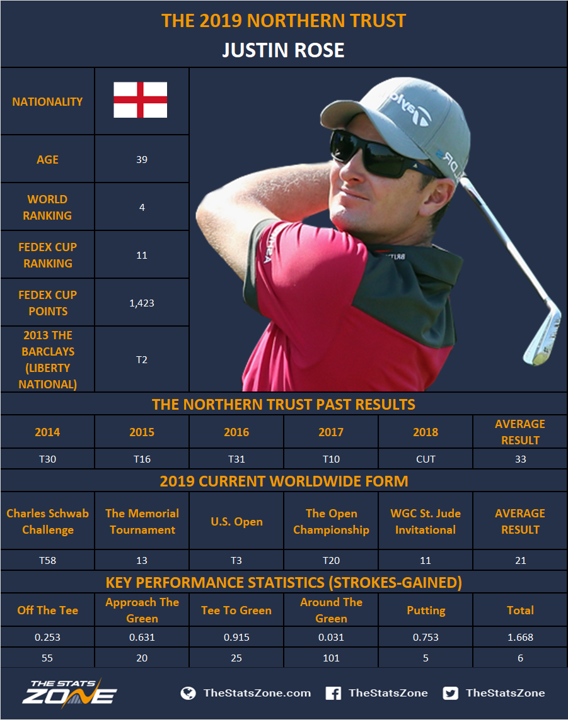 The U.S. Open champion stands fifth in the FedEx Cup rankings and could move himself onto Koepka’s heels with a win. Finishing in a tie for runner-up here in 2013 shows that his game matches this layout and with some strong results in this tournament since 2014, he will be heading into this week to contend. However, since his maiden major victory just under two months ago, his form has been poor with two missed cuts from three starts. This was perhaps to be expected but with the hype of the majors now over and the playoffs beginning, his attention should be firmly back on track. As a course that will demand strong tee-to-green game, where Woodland ranks 12th SG, he will need to be better on the greens as he ranks 133rd SG: putting if he is to push those above him over the coming weeks. 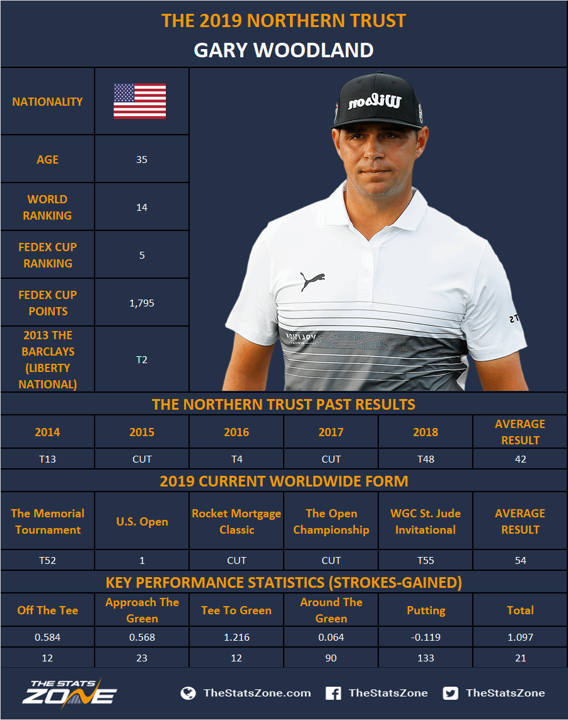 The 2015 FedEx Cup winner has had his worse season to date as a professional golfer which is in part due to his brilliance since he burst onto the scene from 2013. It is easy to forget that Spieth is still just only 26 but already will undoubtedly have to go through some notable swing developments during the off-season. He ranks outside the top 150 players in both strokes-gained off-the-tee and approach the green, two of the main reasons he hasn’t won a title since the 2017 Open Championship. Nevertheless, his ability to score and grind is what makes him one of the very best still and even without a reliable golf swing, he has still achieved seven top 25 finishes from 21 starts this season and regularly manages to shoot scores in the low to mid 60s. Ranked 69 in the FedEx Cup, Spieth will need to muster a solid showing to cement his place into next week and somehow make his way into the Tour Championships. 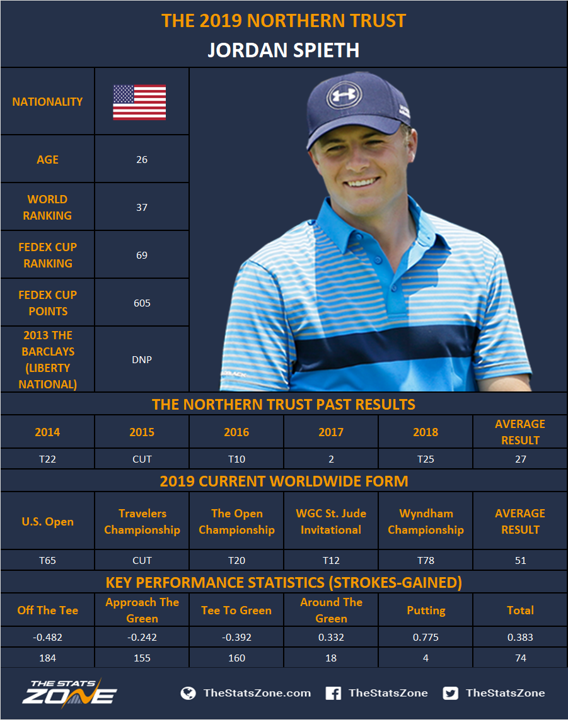 The American very nearly claimed the FedEx crown in 2016 when he lost in a playoff to Rory McIlroy in the Tour Championship, earning a wildcard Ryder Cup pick the following week. Significantly, this is his best finish on the PGA Tour since then but with two top 20 finishes in his last four starts, his game is showing signs of returning to the levels that has earned him five tour wins. Ranked 61 in the standings means he’ll require a good week here to guarantee his place into the BMW Championship. Having finished T25 here in 2015 as well as his current form will provide him with a great opportunity for a high finish. Ranked 33rd SG: total and claiming strokes in all main categories suggests his all-round game is in shape to make a similar run like he did in 2016. 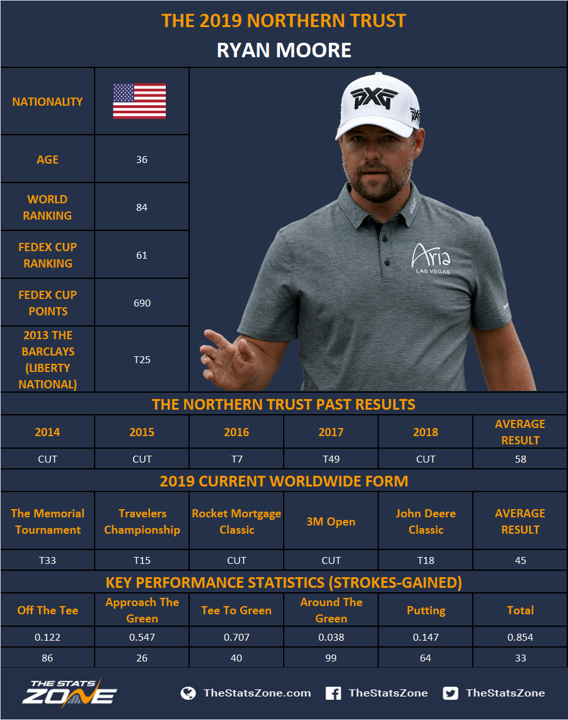 Fan favourite Garcia has been making the headlines for all the wrong reasons this season with on-course melt-downs resulting in damage to greens, falling out with his playing partner and caddy. It is evident from this attitude that something is not quite right in the world of the Spaniard, however as a player who has achieved it all within the game, perhaps he is just missing that spark that such an emotional player needs. Garcia heads to Liberty National out of form with average finishing results of 64th from his past five starts and ranks 65th in the FedEx Cup in need of a much-improved showing to earn his place into the second playoff event. As has so often been the case throughout his career, Sergio is one of the very best tee-to-green, where even this season he ranks 19th strokes-gained. However, his weakness on the greens continue where he ranks 108th SG: putting. Nevertheless, it is perhaps his short-game - something that has typically been very good - that explains his form, where he ranks 128th SG: around the green. If he improves on his scrambling he could push himself at a run through the playoffs and be back in the winners' circle soon. 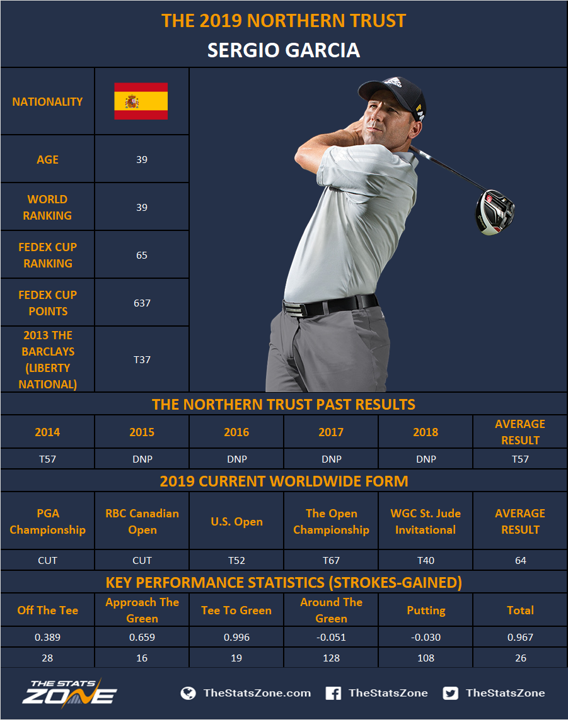