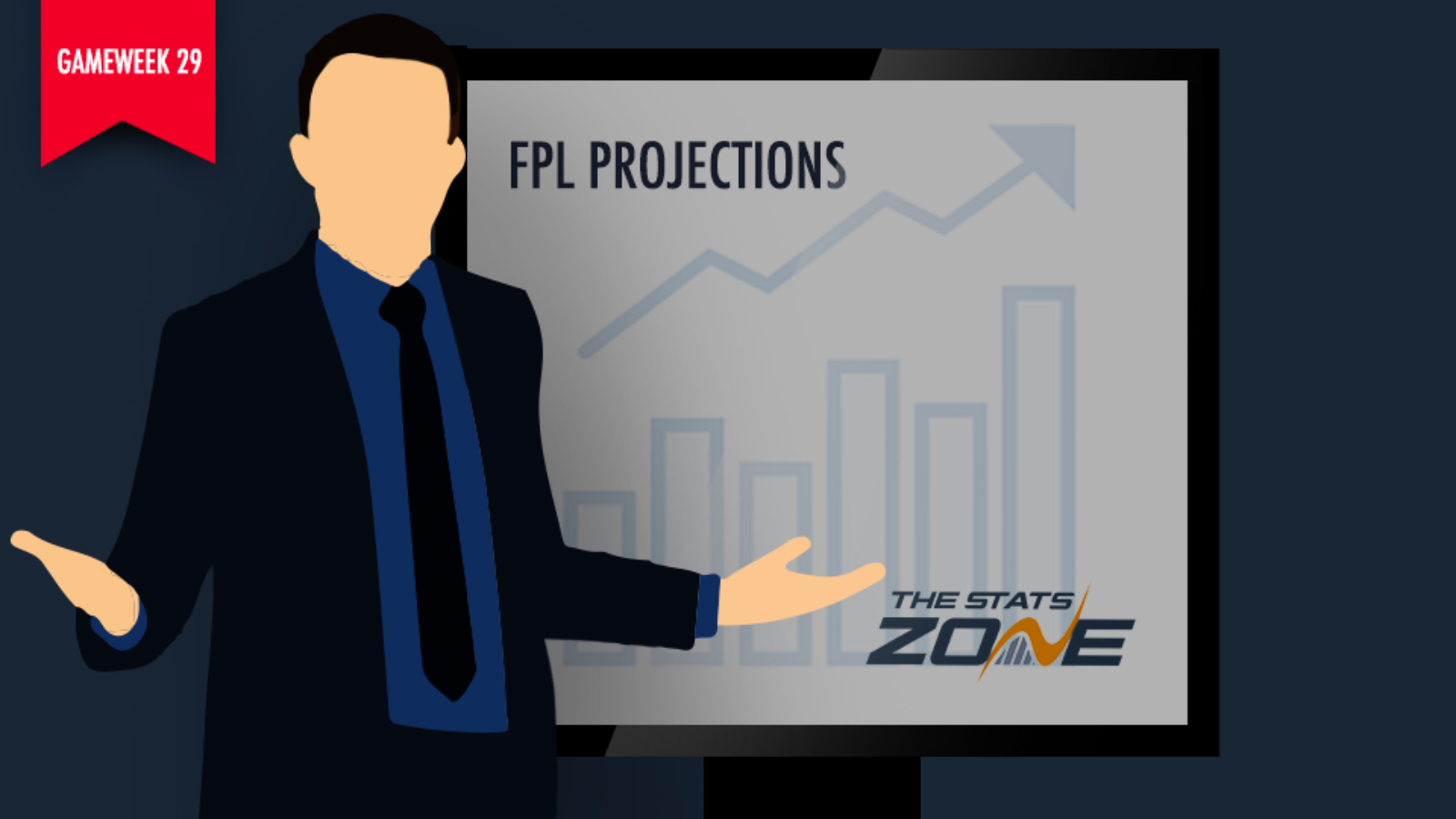 Gameweek 28 was dominated by the performance of relegation threatened Watford, who shocked everyone on Saturday by not only defeating Premier League leaders Liverpool, but dominating them in the process. They were well worthy of their 3-0 victory, with both Ismaila Sarr (£6.3m) on his first start since returning from injury and Troy Deeney (£6.2m) stealing the headlines. Sarr picked up 19 FPL points from the fixture, after scoring twice and setting up Deeney, who bagged himself an assist to go with that goal.

Troy Deeney - written off by so many #watfordfc fans in the past but delivered again tonight. He was incredible. Sarr is arguably the best player to ever wear a Watford shirt.

Sunday saw goals from all four clubs in action as Everton and Man Utd played out a 0-0 draw with goals from two popular FPL assets in Dominic Calvert-Lewin (£6.4m) and the new FPL bandwagon Bruno Fernandes (£8.3m). Meanwhile, Wolves came from behind twice to eventually beat Spurs 2-3 at the Tottenham Hotspur Stadium. Flying full-back Matt Doherty (£6.2m) scored Wolves' first goal before their forward line of Diogo Jota (£6.3m) and Raul Jimenez (£8.0m) both netted to secure a priceless three points in their quest for Champions League football. Jota now has three goals and two assists in his last two Premier League games.

In a week that saw the lowest average points score over the course of the season so far, the projected XI scored a fantastic 50 points in Gameweek 28. This was down largely to three double figure hauls from Nick Pope (£4.8m) Matt Doherty and Bruno Fernandes who added 32 FPL points between them, well over half of the projected XI's total score. Mo Salah (£12.8m) was a captain fail, picking up only two points in Liverpool's loss at Watford, whilst Dominic Calvert-Lewin deserves credit for his goal against Man Utd that saw him earn seven points. It could have been more, had VAR not ruled out what would have been a last gasp winner from the Everton forward. The less said about everybody else the better! Double Liverpool defensive coverage failed miserably with both Trent Alexander-Arnold (£7.8m) and Andrew Robertson (£7.0m) each picking up one single point, whilst Jamie Vardy (£9.8m) was absent from the Leicester squad completely, due to a calf injury. 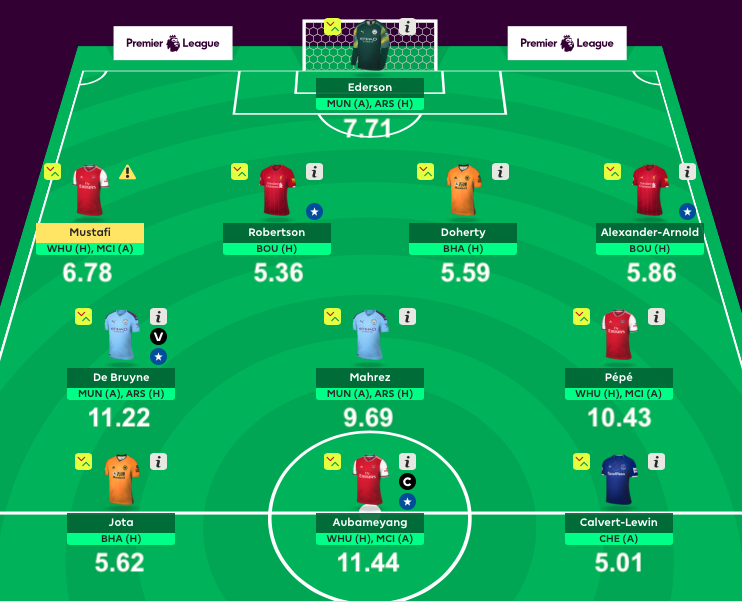 With news of Gameweek 29 being announced as a double gameweek for both Man City and Arsenal, it comes as no surprise that the projected XI for Gameweek 29 features three players from each side. Seven changes have been made in total as goalkeeper Ederson (£6.0m) and midfielders Kevin De Bruyne (£8.4m) and Riyad Mahrez (£8.4m) come into the side from Man City. The reigning Premier League champions compete against their local rivals at Old Trafford in the Manchester derby before hosting Arsenal at the Etihad Stadium in midweek. Focus will be on De Bruyne in particular, with the Belgian currently the highest scoring FPL player so far this season. However, there are question marks over Man City talisman's fitness after a shoulder injury saw him not feature in the Citizen's FA Cup fifth round win over Sheffield Wed in midweek.

Who can catch @DeBruyneKev? 💨 The top points scorer in #FPL this season but is surely a must-have for @ManCity's double GW2⃣9⃣? https://t.co/EgGnqGSz3J

Pep reveals the absence of Kevin De Bruyne this evening was due to a shoulder injury. No guarantees that the Belgium star will be available for Sundays' Manchester derby. 🚑 @PremierInjuries https://t.co/4KiAUTZjCa #MCFC

The Arsenal trio of the projected XI consists of defender Shkodran Mustafi (£5.1m), midfielder Nicolas Pepe (£9.2m) and forward Pierre Emerick-Aubameyang (£11.0m). The latter is entrusted with the captaincy, having scored three goals in his last two Premier League games and accruing 21 FPL points in the process. Big things are also expected of Pepe, with the Ivorian having returned both a goal and an assist earlier in the season against their first opponents of Gameweek 29, relegation threatened West Ham. The Hammers have conceded nine goals in their last three away Premier League games and Arsenal will be hoping to cash in ahead of their trip to the Etihad for the Gunners' second fixture in Gameweek 29.

POTENTIAL #DGW29 #ARSENAL #FPL WHY WE SHOULD CONSIDER NICOLAS PEPE for the DGW? Since Auba and Pepe started together in the last 2 games), I have taken them for consideration. stats credit : @FFScout PEPE (LEFT) vs Auba (RIGHT) Goals - 1 : 3 Assists - 3 : 0

The final player incoming for the projected XI is Diogo Jota, with the Wolves striker in red-hot form at present. He'll be looking to add to the 28 FPL points he has accumulated over the past two gameweeks. Alexander-Arnold and Robertson both keep their place despite disappointing last week as Liverpool host a struggling Bournemouth. Doherty and Calvert-Lewin also retain their places in the side after impressing in Gameweek 28. The projected XI changes formation once again, this time lining up in a 4-3-3 formation.

Matt Doherty has scored more points (𝟯𝟰) than any other player over the last 𝗳𝗼𝘂𝗿 Gameweeks #FPL | @Wolves https://t.co/9ktqHkcJY1 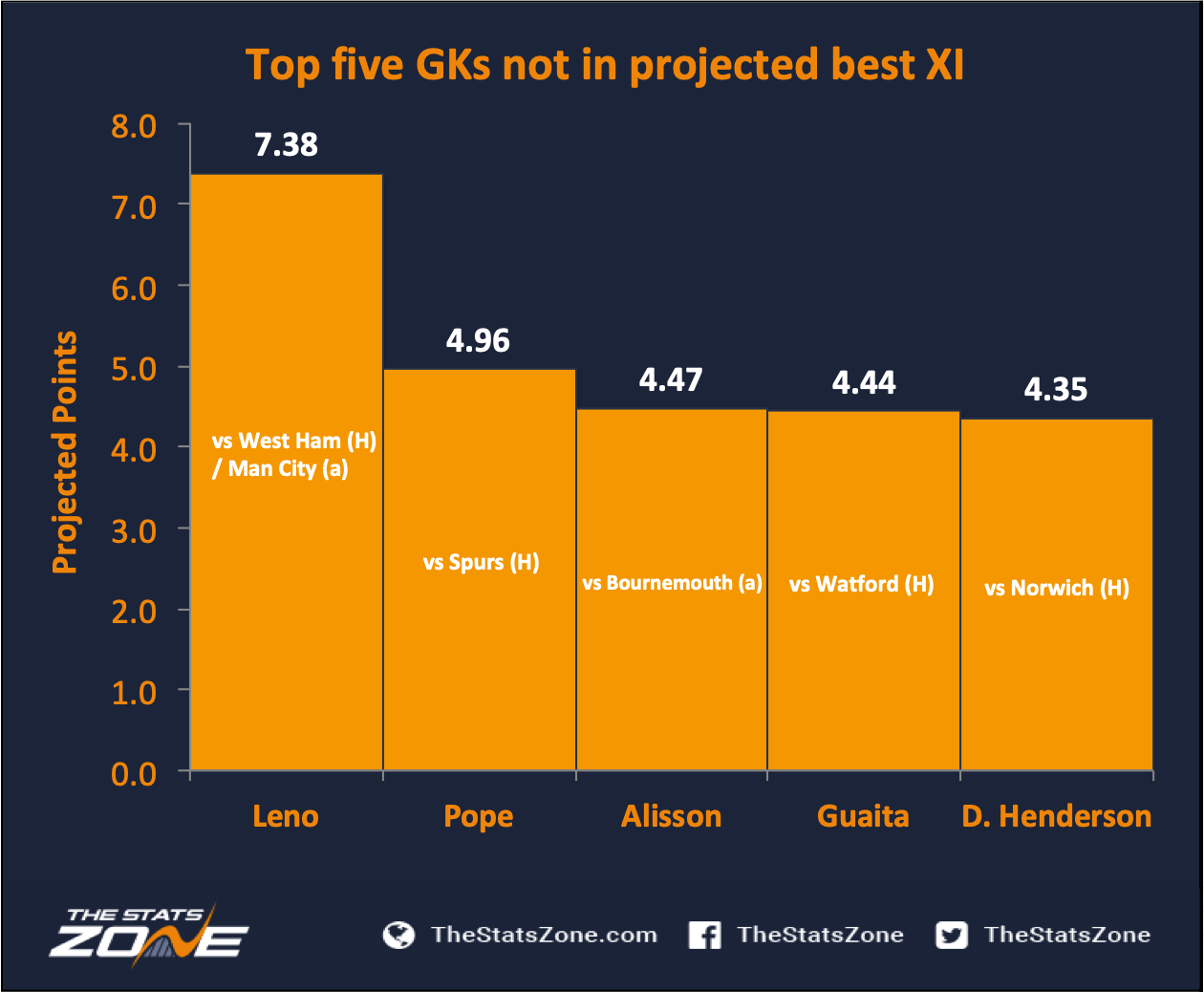 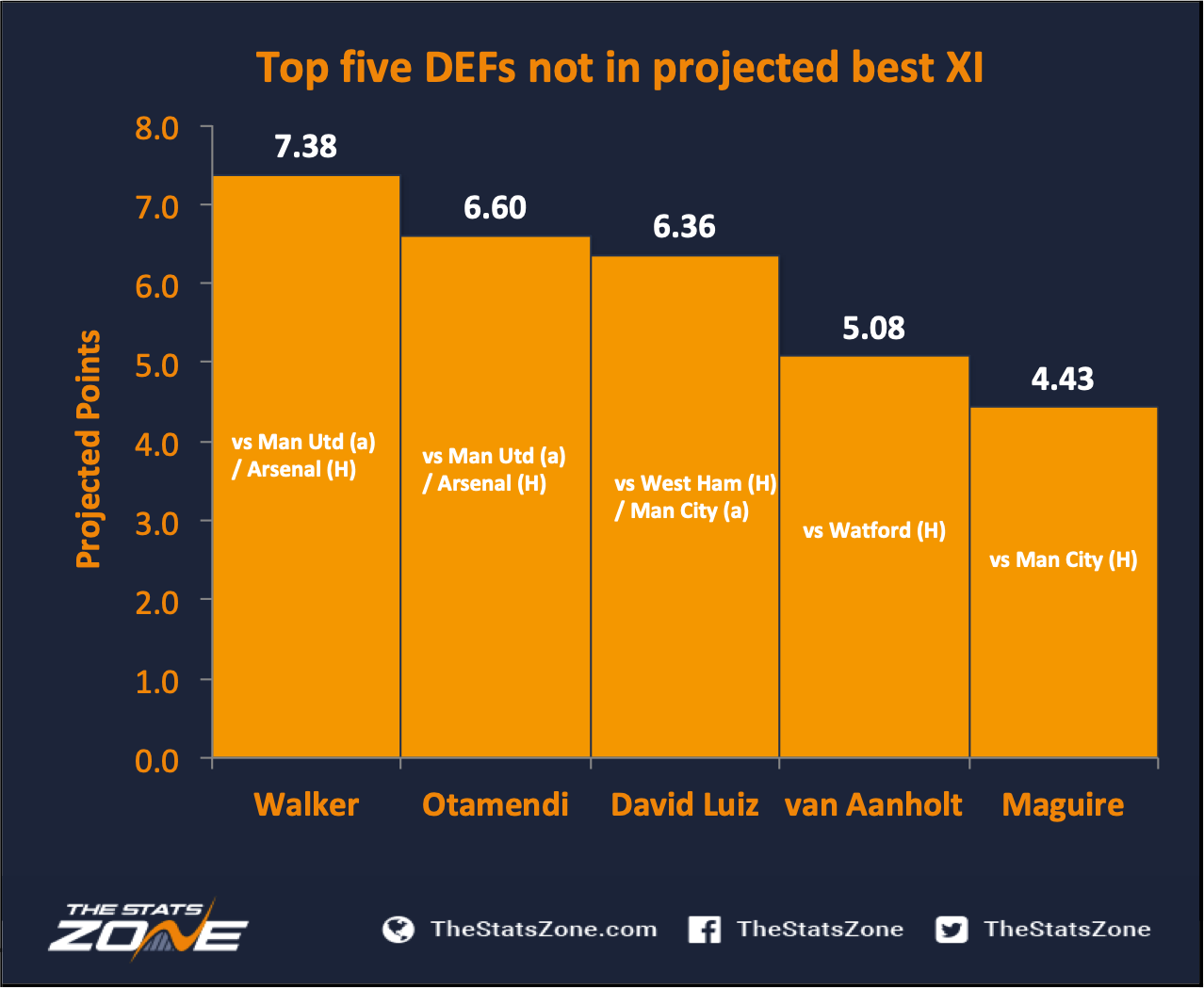 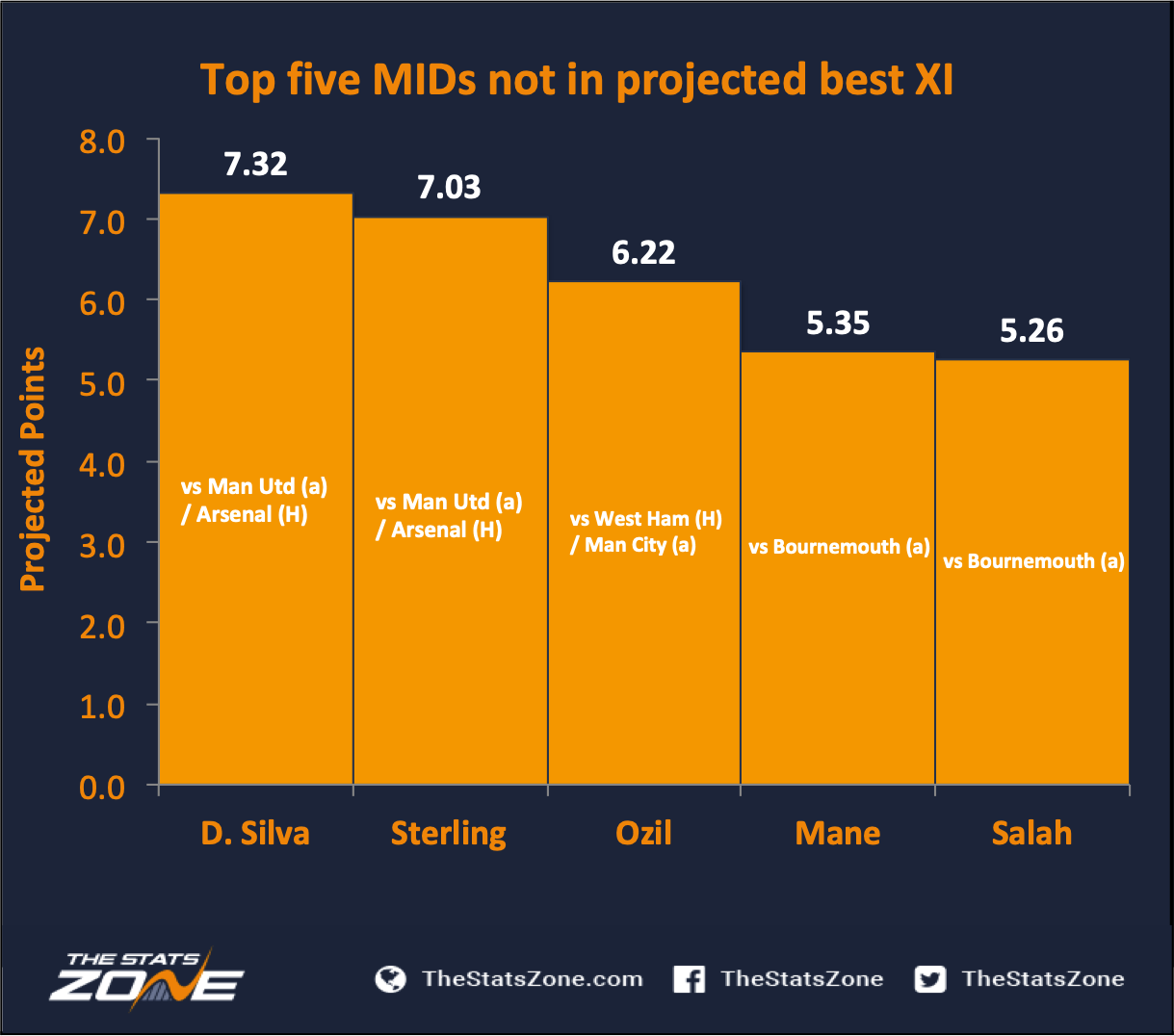 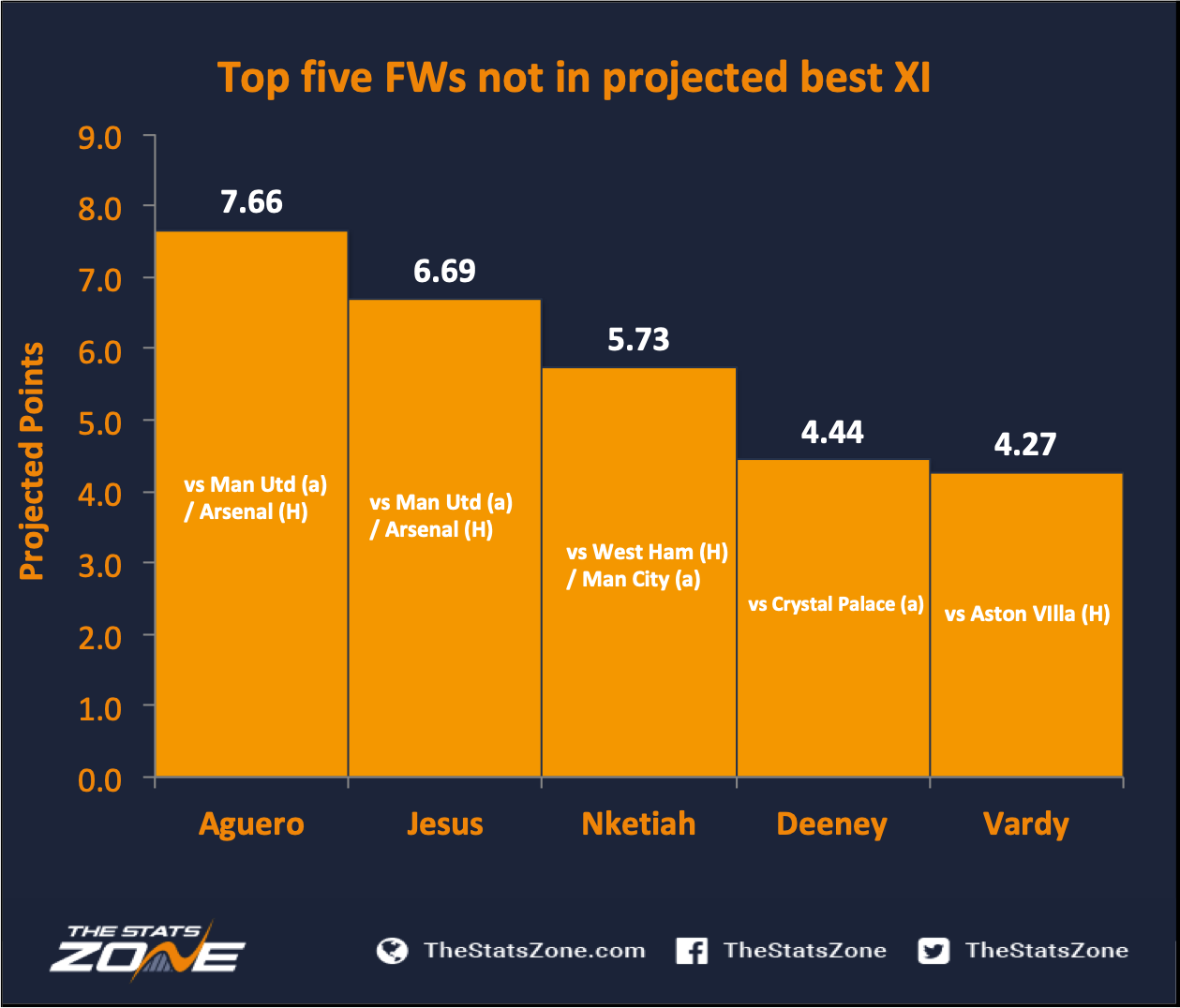