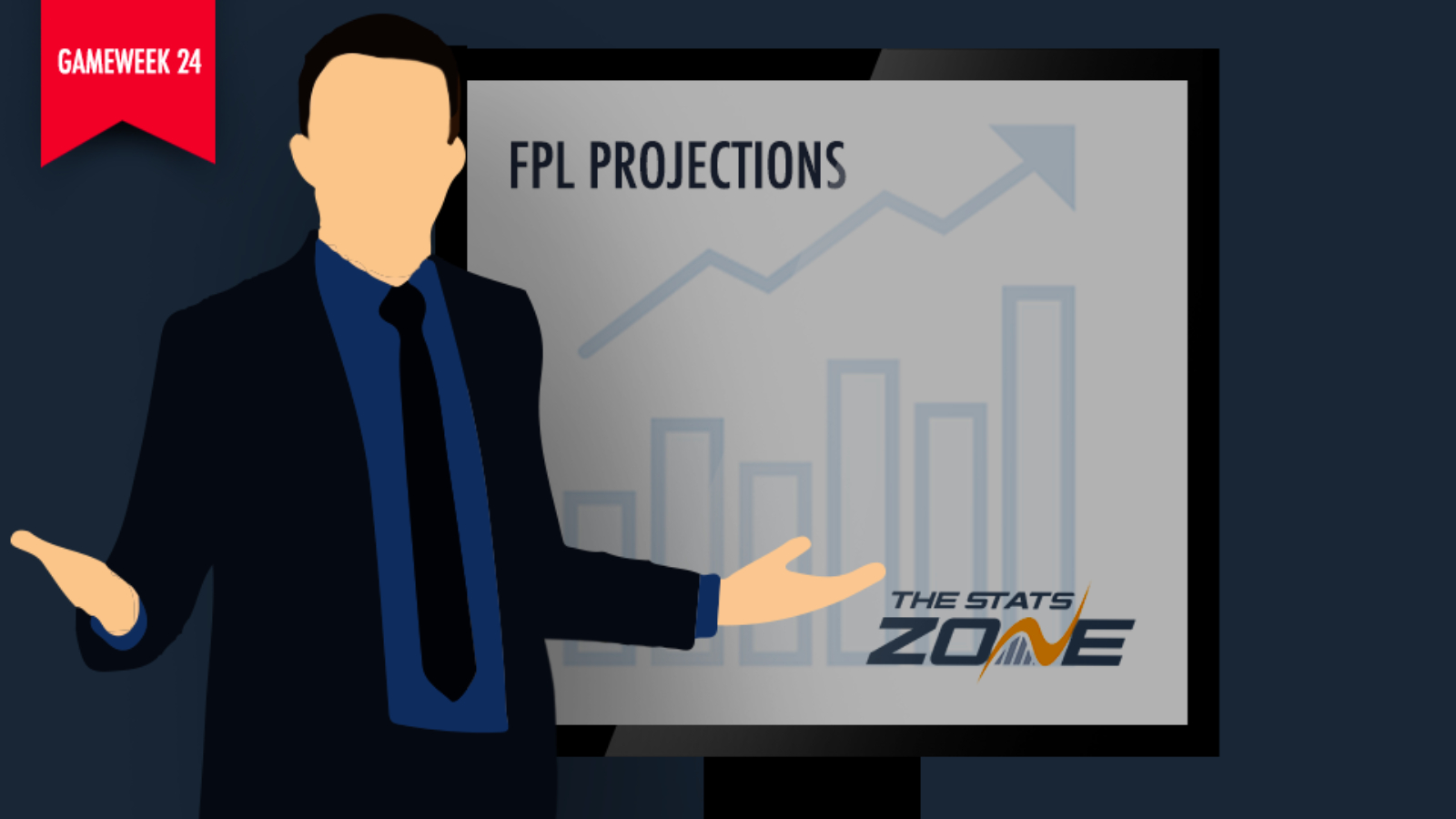 The algorithm can be fairly happy with Gameweek 23 mainly thanks to its goalkeeper and defenders. 37 of the 51 FPL points it accumulated over the gameweek was won by goalkeeper Ben Foster (£4.9m) who kept his fourth clean sheet in six league games, and defenders Andrew Robertson (£7.0m), Cesar Azpilicueta (£5.8m) and captain Trent Alexander-Arnold (£7.5m), whose assist and clean sheet saw the algorithm pick up 20 points from its captain. Once again, the double Liverpool defence came up trumps.

Just remember double Liverpool defence isn’t just for the double gameweek...it’s for the rest of the season 👌 #FPL https://t.co/OMZrRkQuie

5 - Trent Alexander-Arnold has assisted five league goals from dead-ball situations this season, the most of any player in Europe's top five leagues. Pinpoint. #LIVMUN

The algorithm's midfield and frontline saw blanks aplenty with Riyad Mahrez (£8.5m), Kevin De Bruyne (£10.7m), Sadio Mane (£12.4m), Tammy Abraham (£7.9m) and Danny Ings (£6.9m) all failing to register any attacking returns in Gameweek 23. Brighton forward Neil Maupay (£5.9m) managed an assist, but it was tempered by a late booking which reduced his overall score to 4 FPL points, whilst Richarlison (£8.1m) didn't even make it onto the pitch due to injury. 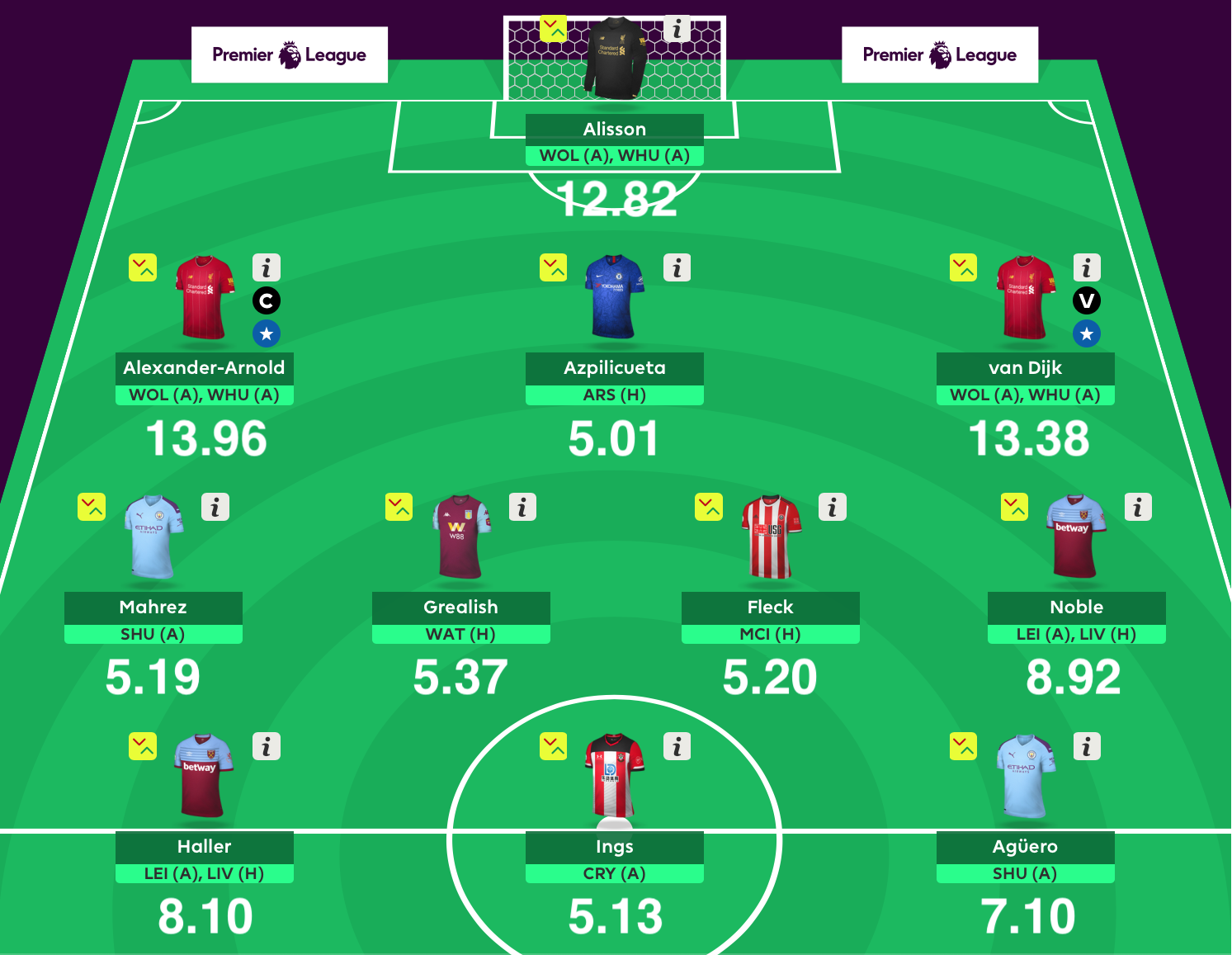 With the first double gameweek of the season on the horizon, it's no surprise that the algorithm sees a lot of change this week. Four players keep their place in the starting line-up as Richarlison's injury means that he will be replaced by John Fleck (£5.0m) of Sheffield Utd. The big news is that a triple Liverpool defensive cover is suggested as the best form of FPL coverage from the Premier League leaders ahead of their two Gameweek 24 fixtures away at Wolves and West Ham. Goalkeeper Alisson (£6.1m), central defender Virgil van Dijk (£6.4m) and full-back Trent Alexander-Arnold (£7.5m) make up the three with the latter being given the all-important captaincy after racking up 60 FPL points in his last six gameweeks.

Trent Alexander-Arnold has 6 assists and 1 goal in his last 9 appearances in the Premier League. Reminder: he’s a right back. https://t.co/q7Pb0ip39r

The defence is completed by Cesar Azpilicueta (£5.8m), who retains his place from Gameweek 23 with Chelsea at home to local rivals Arsenal. The midfield sees only Riyad Mahrez (£8.5m) keep his spot from Gameweek 23, with the Algerian expected to start for Man City away at Sheffield Utd after coming on from the bench against Crystal Palace last weekend. The last time Mahrez started a game away from home was against Aston Villa in Gameweek 22, where he registered two goals, an assist and 17 FPL points. Joining him is Jack Grealish (£6.6m), fresh from his goal away at Brighton, with the Aston Villa captain having accrued 24 FPL points over the past three gameweeks. Also making an appearance in the side is West Ham's Mark Noble (£5.0m). With a double gameweek on the horizon for the Hammers againsy Leicester (a) and Liverpool (H), Noble taking penalties could prove lucrative from an FPL perspective.

Adding a little bit of Mark Noble for the double won't hurt, or? Even if he blanks both games, its still 4 points. #FPL #DGW24

The forwards lining up for the algorithm include another West Ham asset, Sebastien Haller (£7.0m), who like Noble will have two fixtures this gameweek. He is joined by Danny Ings (£6.9m), who keeps his place despite his Gameweek 23 blank vs Wolves and the mercurial Sergio Aguero (£11.9m), who is back in form having scored five goals in his two league games, accumulating 33 FPL points in the process. 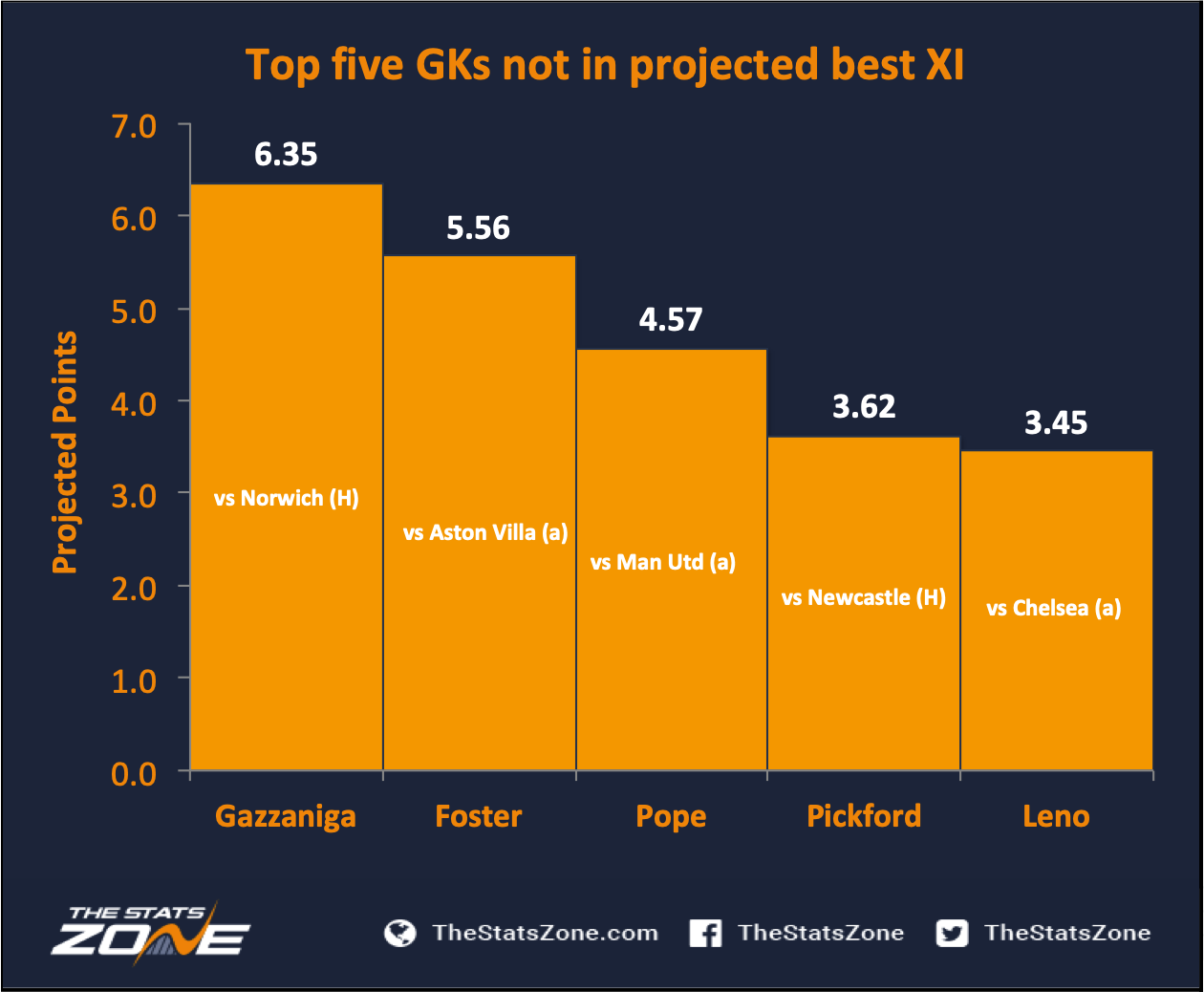 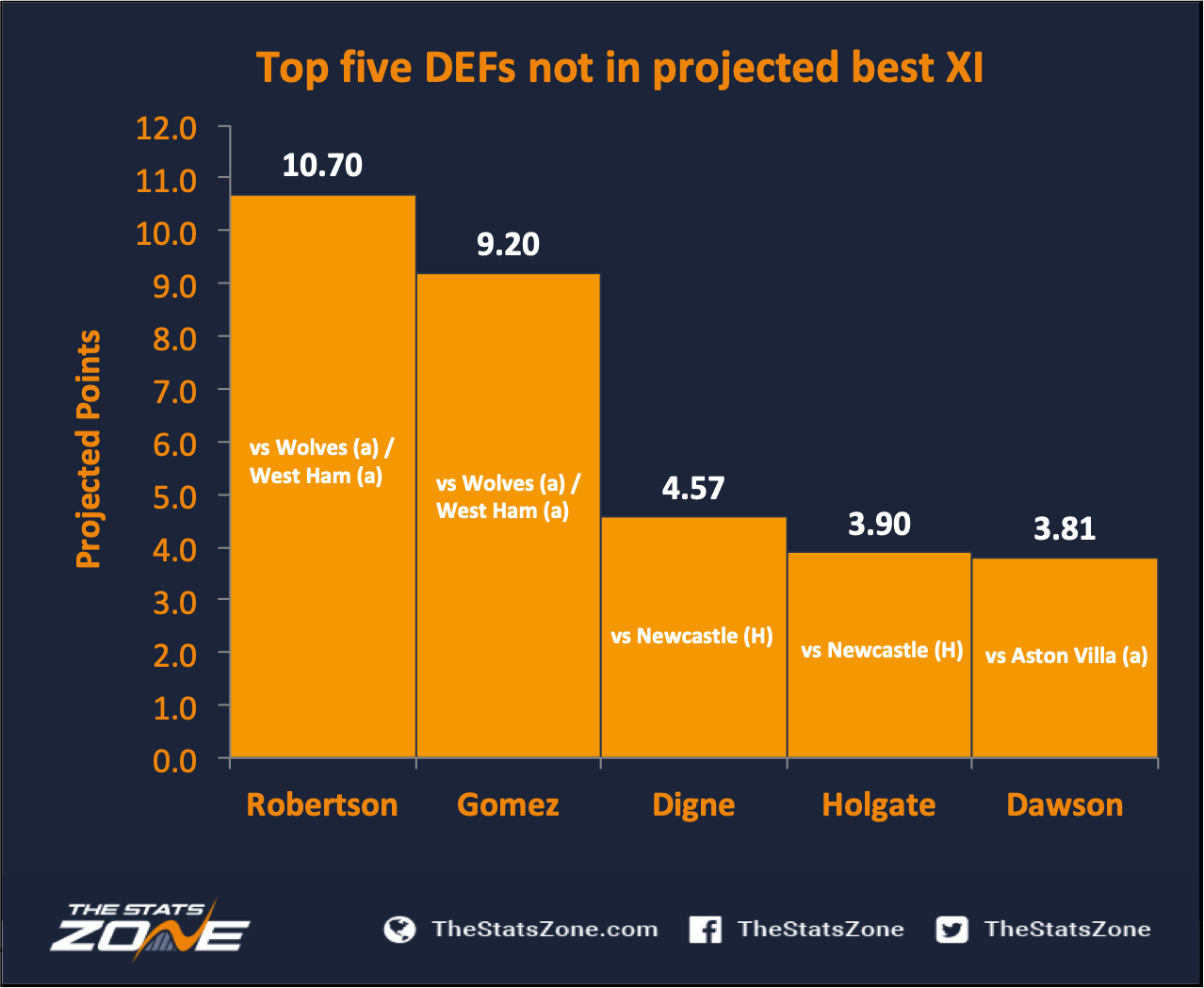 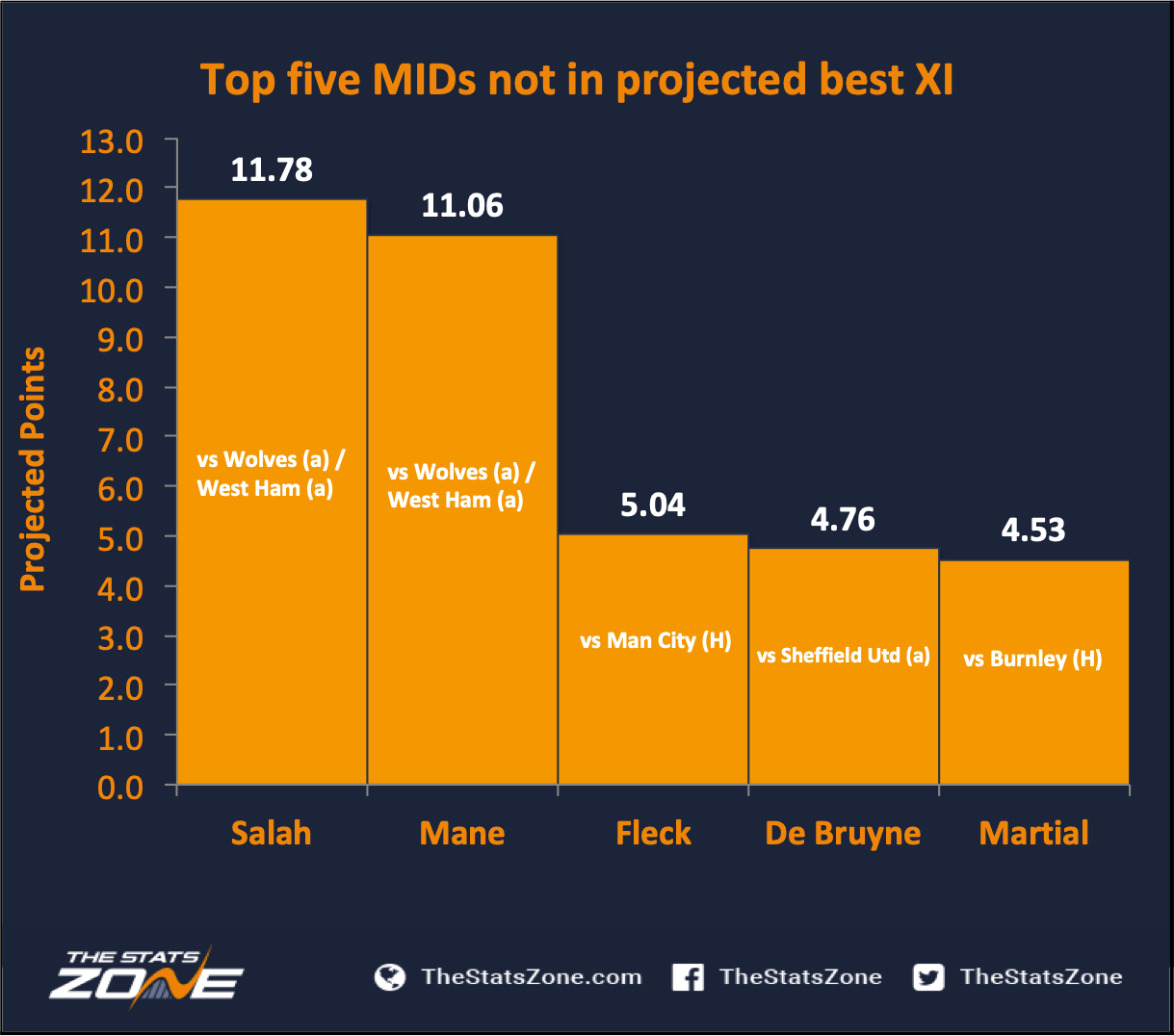 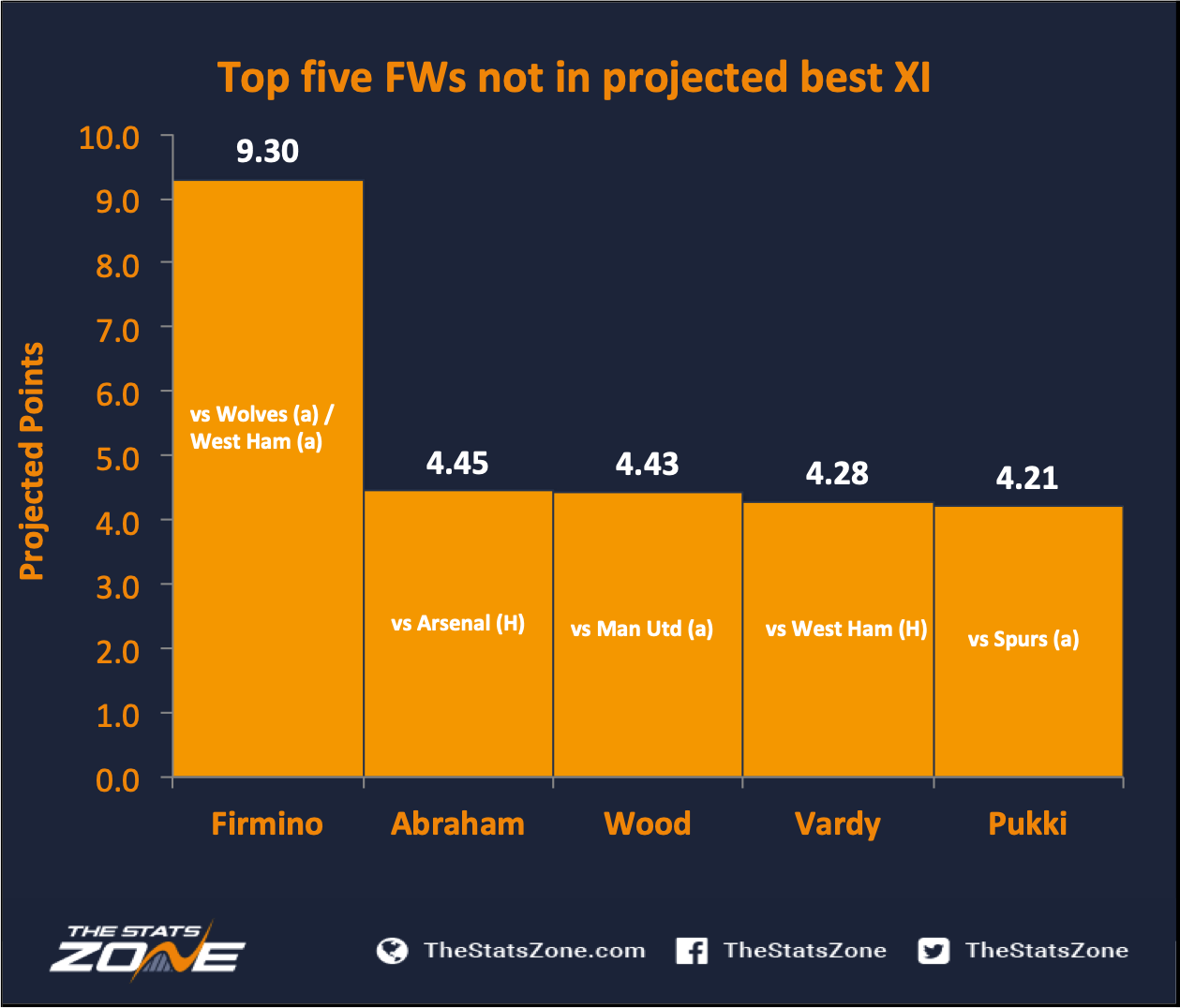