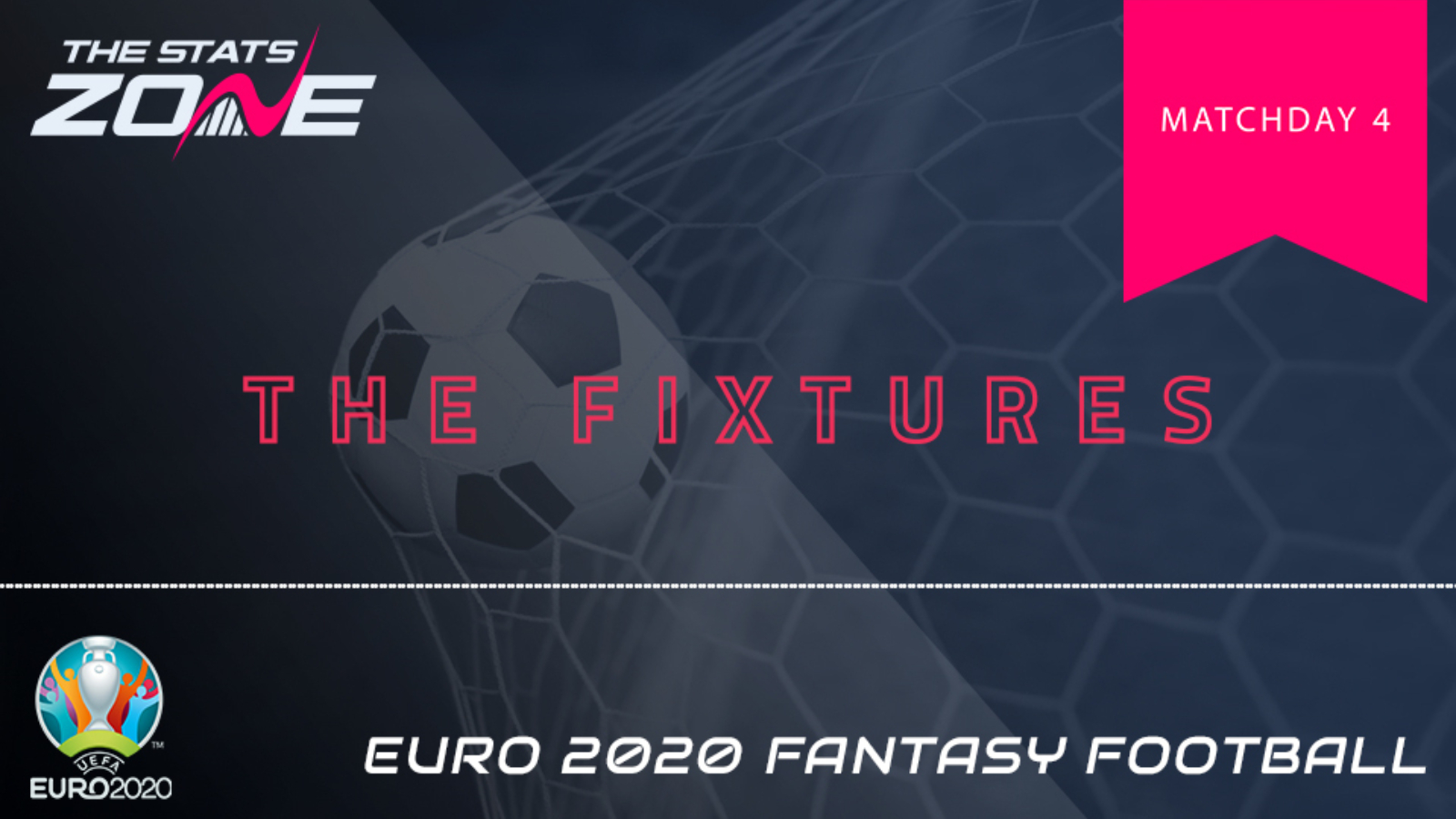 A dramatic matchday 3 saw plenty of twists and turns we found out which 16 countries will compete in the Round of 16 at EURO 2020. Arguably the most drama came from the final round of Group F fixtures, which saw each of Germany, Portugal and Hungary set to be eliminated at one stage as both games took place. In the end, it was the latter who missed out as Hungary failed to secure victory over Germany despite taking the lead twice, with Kai Havertz (€9.1m) and substitute Leon Goretzka (€6.4m) both scoring equalisers leading to a 2-2 which broke Hungarian hearts. Elsewhere, the winner takes all Group D clash at Hampden Park saw Croatia beat Scotland 1-3 with midfield maestro Luka Modric (€8.5m) starring for Zlatko Dalic’s side, scoring a magnificent goal. Fellow midfielder Ivan Perisic (€8.6m), was also on the scoresheet, netting his second of the tournament so far.

After losing both their opening Group B fixtures, Denmark qualified for the knockout stage in dramatic fashion, thrashing Russia 4-1 in Copenhagen with Yussuf Poulsen (€8.2m) scoring for a second successive game, whilst two defenders were also on the scoresheet in centre-half Andreas Christensen (€5.5m) and left-wing back Joakim Maehle (€4.5m). Also from a EURO fantasy perspective, Cristiano Ronaldo (€12.2m) continued his excellent form at this season’s European Championships, scoring twice from the penalty spot and picking up ten EURO fantasy points in a 2-2 draw with France. Ronaldo is currently the highest scoring fantasy football asset available with 29 points to his name so far, whilst from a wider footballing perspective the mercurial Portuguese superstar drew level with Iran’s Ali Daei all-time men’s record of having scored 109 international goals.

Matchday 4 sees us enter the business end of the competition as the round of 16 begins. Knockout football gives EURO fantasy managers plenty to consider in every position with players from certain countries no doubt set to court plenty of interest from a EURO fantasy depending on their respective fixture. We attempt to decipher those all-important round of 16 matches, picking out the key games that could lead to plenty distributed EURO fantasy points.

After making an ideal start to their Group F campaign with victory over Germany, France have since failed to win their last two games, securing draws against both Hungary and Portugal. Whilst five points was enough for them to be crowned winners of Group F, Didier Deschamps’ side will need to improve on Matchday 4 if they are not to suffer a shock early exit in the round of 16 against a Switzerland side with their confidence restored off the back of a comfortable win over Turkey that sealed that place in the knockout stage.

From a EURO fantasy point of view, many French assets stand out. Whilst Kylian Mbappe (€12.0m) has attracted the most interest, the PSG forward has failed to find the net at EURO 2020 so far. Therefore, the smarter fantasy play may be to select fellow striker Karim Benzema (€10.0m), who opened his goalscoring account at the tournament with a brace against Portugal on Matchday 3 and has penalties seemingly within his control. Also, don’t forget about Antoine Griezmann (€11.1m), who was last on the scoresheet for France on Matchday 2 vs Hungary. French forwards are likely to be in high demand when considering that Switzerland shipped 5 goals from their three Group A matches, failing to keep a single clean sheet. Defenders from France are also worth serious consideration with central defenders Raphael Varane (€6.1m) and Presnel Kimpembe(€5.6m) both offering an attacking threat from set pieces to go with their clean sheet potential.

WILL IT BE GOODNIGHT VIENNA TO AUSTRIA?

Despite having won two of their three group games, Austria unsurprisingly head into their round of 16 encounter with Italy as heavy underdogs and rightly so when considering how impressive the Italians looked over the course of their three fixtures in Group A. Roberto Mancini’s side racked up three victories with seven goals scored and three clean sheets. The Azzurri have now not conceded a single goal in their last 11 games and are currently on an incredible 30-match unbeaten run. With that in mind, numerous Italy players are expected to court heavy EURO fantasy interest ahead of Matchday 4.

After being rested in Italy’s final group stage match with knockout qualification already secured, forward Ciro Immobile (€10.1m) is set to be restored back to the starting line-up for this one. The Lazio striker found the net in both of his two starts so far at EURO 2020 with an assist also to his name and 16 EURO fantasy points. Immobile will no doubt prove an extremely popular acquisition for fantasy managers as will midfielder Lorenzo Insigne (€8.6m), who like Immobile did not feature on Matchday 3, but proved himself as a valuable EURO fantasy asset back on Matchday 1, which saw him score in a 3-0 win for Italy over Turkey. With Italy favoured to record a 12th successive shutout, the temptation to double up on Azzurri defensive assets will be high. Left-back Leonardo Spinnazola (€5.6m) offers the most attacking potential within Mancini’s backline, whilst centre-half Leonardo Bonucci (€5.6m) and goalkeeper Gianluigi Donnarumma (€5.6m) represent safe selections for those looking for guaranteed Italian starters.

OH NEIN, NOT THE GERMANS AGAIN!

It would simply be remiss of us not to highlight this fixture, even if it is a little tougher to judge from a EURO fantasy point of view. Matchday 4 will see Gareth Southgate’s England take on Joachim Low’s Germany in a round of 16 fixture that triggers so many memorable (and heartbreaking) memories. England, with home advantage in their favour will be confident considering the attacking options at their disposal, not to mention having not conceded a goal in their three group stage matches. Germany however, will certainly fancy their chances against a country who have a worrying knack of freezing against an elite opponent in a major international tournament. Could a penalty shootout be in the cards once again as was the case in the EURO 96 semi-final between the two sides? Hopefully not, for the sake of this writer’s heartrate!

Germany boss Joachim Low expects different type of game when his side face England at Wembley. “They play at home, they want to attack. It’s going to be an open match. But as I said, it’s a different match against England." #GER #Euro2020 https://t.co/sEbMNGe9Fk

As stated above picking out the EURO fantasy players expected to accrue the most points from this fixture is difficult to due to the unpredictability of the contest. However, a number of players from both sides are in good form leading into Matchday 4. For Germany, midfielder Kai Havertz (€9.1m) has been deployed in a very advanced position by head coach Low and comes into this off the back of goals in successive group stage fixtures. Defender Robin Gosens (€5.2m) may not have a clean sheet to his name, but with license to roam forward by Low, the left-wing back racked up two assists and a goal in Die Mannschaft’s 4-2 triumph over Portugal back on Matchday 2.

England meanwhile, boast a plethora of enticing EURO fantasy defensive assets. With Southgate having made changes to his backline over the course of the group stage, the safe move would be to plump for either defender John Stones (€5.6m) and/or goalkeeper Jordan Pickford (€5.6, with both featuring in all three group games and both expected to start on Matchday 4. Going forward, striker Harry Kane (€11.5m) has struggled having failed to score in the tournament. However, midfielder Raheem Sterling (€9.6m) has been in fine form infront of goal, with the speedy winger netting each of England’s two EURO 2020 goals acquired in the group stage.