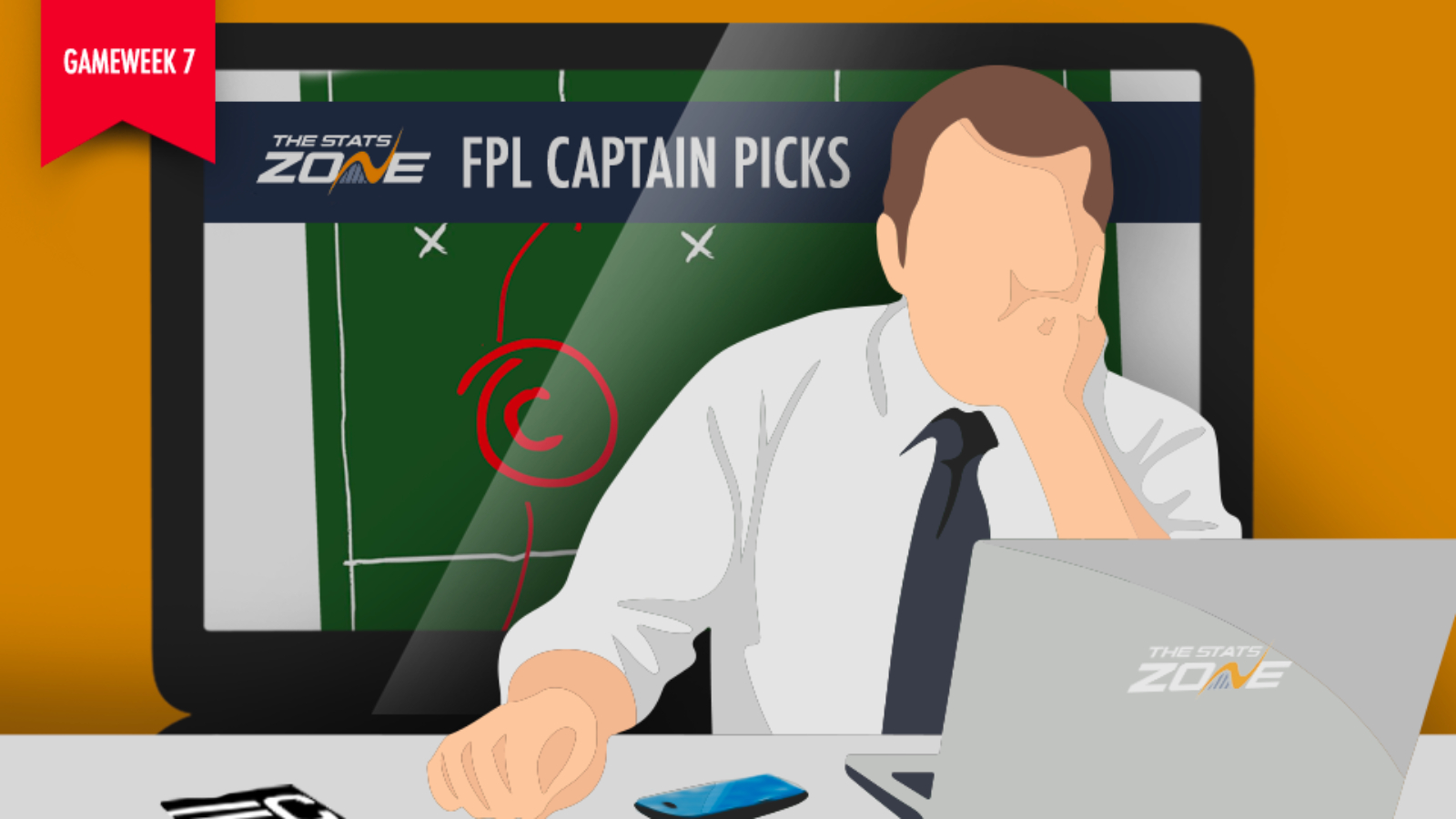 Last week, four of our captain tips returned more than the two appearance points as Sergio Aguero (£12.2m) and Pierre-Emerick Aubameyang (£11.0m) both scored, while Mo Salah (£12.5m) and Heung-Min Son (£9.7m) each registered an assist. The only disappointment was Teemu Pukki (£7.1m) who continued his away day struggles as Norwich drew a blank against Burnley.

The main captaincy story of Gameweek 6 was the benching of Raheem Sterling (£12.1m), who represented the most captained player for GW7 – a decision many FPL managers came to regret when the Man City team sheet was released at 2pm. Of course, this also led to John Lundstram (£4.4m) replacing Sterling from the bench for many an FPL manager, while a multitude of vice captains were placed on De Bruyne, with his 17 points soon to become 34.

When Pep Roulette tries to destroy your #FPL team but Vice Captain KDB gets 1 goal, 2 assists and probably 3 BPS for 17 points.

AND your first sub in for Sterling is 12 Point Lundstram.

Enough about last week though, and instead let's look ahead to the best captain options from Gameweek 7 ahead of Saturday’s 11.30am deadline.

With a goal and two bonus points against Leicester, whisper it quietly but Harry Kane (£11.0m) has now registered an attacking return in each of his last three matches – two goals and one assist. Up next for Spurs is the visit of Southampton, another side who Kane has an excellent record against. The English forward has eight goals and two assists in nine Premier League appearances against the Saints, and hasn’t failed to score against them in each of the last five league matches.

Kane has scored six goals in Spurs' last four games against Southampton! Back on the scoresheet in GW6!

Who's on him GW7? #FPL pic.twitter.com/ZPLVfgRomJ

His record at home is even more impressive. In the previous two seasons, Kane has scored four and assisted once against the Saints with those two performances returned point scores of 17 and 12 for his FPL managers. With a lot of players looking towards City and Liverpool assets for the armband this week, FPL managers who own Kane could be rewarded for placing their trust in the Spurs frontman.

Having just put eight past Watford, it’s a shame that the whole of Man City can’t be captained when they play Everton this weekend. Realistically, there are three obvious candidates. The merits of Sergio Aguero (£12.2m) and Kevin De Bruyne (£9.9m) are clear to see while Raheem Sterling (£12.1m) is still a tempting option although, given his involvement in the Carabao Cup midweek, he is perhaps the most likely to not make the starting XI on Saturday.

⚽️🅰️ Top Players by Mins per Goal or Assist

Between Aguero and De Bruyne there isn’t a wrong choice as both have been electrifying in the opening six gameweeks of the season. Aguero has scored in every game so far this season – the only FPL player to manage such a feat. Meanwhile, De Bruyne has registered attacking returns in each of the five games he has started. His only blank came against Norwich in Gameweek 5, when the Belgian came off the bench in the second half.

Kevin de Bruyne is absolutely tearing up #FPL this season. Leading the league in creativity and assists/90, and one of the top BPS producers too.

Based on watching him play, if anything he's been slightly unlucky not to get more returns. Could have had 5 assists on the weekend. pic.twitter.com/8vi7kmWm4K

Any one of Roberto Firmino (£9.5m), Mo Salah (£12.5m) or Sadio Mane (£11.6m) are excellent option for the armband this week, as Liverpool travel to Sheffield Utd in the Saturday lunchtime match.

Firmino has been arguably Liverpool’s best player so far this season and has only blanked once this season, in Gameweek 2. The reason for not selecting the Brazilian is due to his lack of explosive potential. Going back to the start of last season, Firmino has registered point returns of ten or more just four times. This is relatively low when compared to Salah and Mane who have returned such points totals eight and seven times respectively.

I'm going with him!

Salah and Mane are cool but it's no party without Firmino! Directly involved in everything so far. Seems the plan this season is for him to get forward and if this continues he's much better value at 9.5m. 7 att returns, 9 bp (Salah 7, 7; Mane 5, 6) #FPL pic.twitter.com/JMnddBArwO

In the choice between Mane and Salah for the armband, Mane would probably be the best option given his excellent away record this season. The Senegalese forward already has two goals and an assist to his name away from Anfield, whereas Salah only has the one assist. The main concern over Mane is his fitness. While Klopp downplayed the knock that forced Mane off against Chelsea, he was seen noticeably limping after the match and with a Champions League fixture on Tuesday coupled with Divock Origi’s (£5.3m) return to training, his position in the starting XI is not assured at this stage.

Klopp provides an injury update on Mane: “It was a knock on the bone, around the knee, and a dead leg – that’s an awful combination. He is OK but we have to make that substitution. You will never win at Chelsea without putting a proper shift in and we did that today." #LFC

That leaves Salah as the captain choice, which isn’t really a bad place to be.

Can see a Salah haul this weekend.

Credit to SHU - they're not afraid to come out & press against the big teams, but this usually plays into the big teams' hands.

Norwich, Burnley and Newcastle all tried it against Liverpool & the scores were 4-1, 0-3 and 3-1 respectively. #FPL

Chelsea welcome Brighton to Stamford Bridge this weekend as Frank Lampard goes in search of his first league win at home. Key to victory will be the goalscoring form of Tammy Abraham (£7.5m), who despite blanking last week has seven goals to his name this season and possibly should have scored an eighth against Liverpool.

I was hoping Mount would come out on top as I'd prefer to replace a midfielder in my team rather than a forward but looks like Tammy is smashing it! #FPL pic.twitter.com/dnZHKxTNqg

The forward is one of the few forwards in FPL who appears to have regular big hauls in him, having already registered point totals of 13, 13 and 14 this this season. With Chelsea committed to their attacking style of play, Abraham will be the likely beneficiary of more games with similar totals and a home match against Brighton offers an excellent chance to get back amongst the goals.

Gameweek 6 gave FPL managers a reminder of the attacking potential Ricardo Pereira (£6.0m) exhibits, after the defender found the net against Spurs.

Didn't see many recommending him. Had a goal yesterday, 2 Shots (1 SoT), attacks the right flank, great upcoming fixtures, owned by 5.1%.

Currently third in the table, Leicester are enjoying a stellar start to the 2019-20 season. While traditionally lauded for his attacking line-ups, Rodgers and Leicester’s run to third is built on their solidity at the back. The side have the joint best defence in the league, having conceded just five league goals this season.

Gameweek 7 see Newcastle visit the King Power Stadium. The Magpies have been struggling for goals this campaign with their total of four the joint worst record in the league. As such, a clean sheet is very much on the cards for the Leicester backline of Ricardo Pereira (£6.0m), Ben Chilwell (£5.4m), Jonny Evans (£5.0m) and Çaglar Söyüncü (£4.6m). Pereira offers a favourable double up of a likely clean sheet coupled with potential attacking returns.