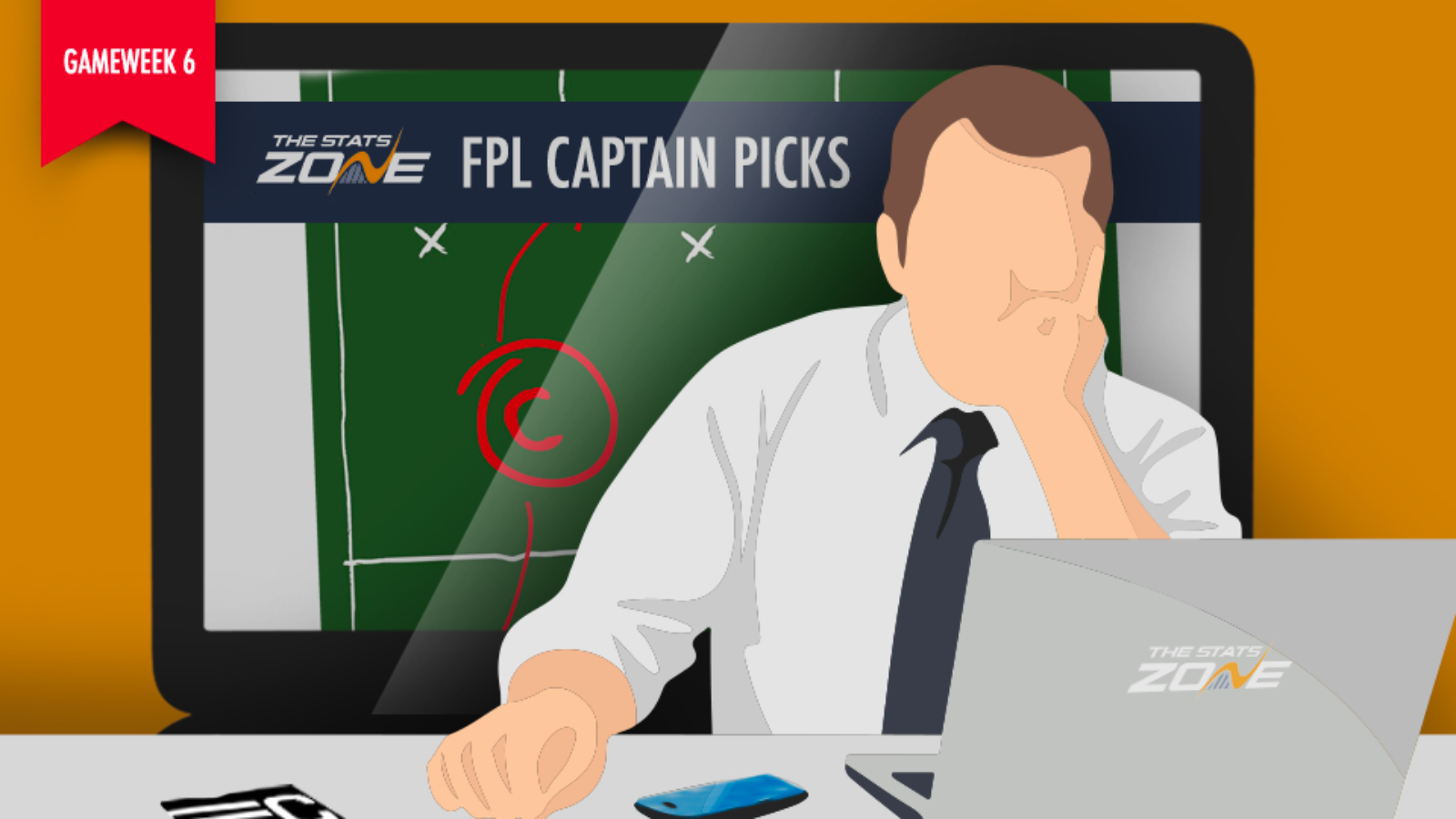 The end of Gameweek 5 heralded the return of European football with Man City, Liverpool, Chelsea, Spurs, Man Utd, Arsenal and Wolves all in action during the week. With FPL managers holding their breath midweek, Mason Mount (£6.5m) has already been the first causality following a horror challenge from ex-Arsenal man Francis Coquelin.

Of course, it’s not just injuries to worry about as the busy schedule means rotation is on the horizon. Discussing playing probabilities is beyond the scope of this article (and covered in more depth in our podcast at the top of the page) so assuming all the top players make it through the week unscathed, the best captain options from Gameweek 6 fixtures are assessed ahead of Friday’s 7.00pm deadline.

Up next for Arsenal is a home match against Aston Villa who have kept the joint most clean sheets this season following their second shut-out in Gameweek 5 against West Ham. Both of those clean sheets were delivered at home though, as away from Villa Park they’ve conceded four goals in two matches and an incredible 26.5 shots per game. Aubameyang has one of the best conversion rates in the league, scoring with 31.25% of his shots on goal. Given the number of shots Arsenal are expected to have, Aubameyang could easily be the top-scoring player in Gameweek 5.

Pierre-Emerick Aubameyang has now scored 14 goals in his last 14 games for Arsenal.

Keeping up his record as just one of three players to have secured FPL returns in each of the opening five gameweeks, Sergio Aguero (£12.1m) is a heavy favourite for the armband this weekend. The Argentinian has an excellent record against the Hornets, scoring seven times with two assists in his six league starts against them, including a hat-trick in 2017-18.

While rotation is always a concern with Pep, Aguero recently had a two-week break after not being called up by Argentina over the international break. After City's surprise defeat against Norwich, they’ll be chomping at the bit to put the match behind them on Saturday. With Liverpool not playing until Sunday, Pep's troops have a great chance to close the gap to two points and put some pressure on the league leaders. While Gabriel Jesus (£9.5m) is an excellent option, Aguero is still Guardiola’s first-choice forward.

The match against Chelsea represents a ‘revenge’ game for Mo Salah (£12.5m), who was jettisoned from the club after making just 13 appearances over four years after being sent out on loan twice. Since his return to the Premier League, Salah has scored twice in four appearances against his former club.

Liverpool's front three have all been directly involved in 5+ goals after the first five Premier League games this season. pic.twitter.com/TE93sKUtoT

Injuries to Antonio Rudiger (£6.0m) and Emerson (£5.5m) have depleted an already shaky Chelsea backline and they have conceded in every League game this season so far. In fact, the 11 goals they’ve let in represents the second worst defensive record in the league and Liverpool will be extremely motivated to not give any initiative back to City following their unexpected defeat last weekend.

The top-scoring player in FPL, no player has been involved in more Premier League goals this season than Norwich’s Teemu Pukki (£7.1m) – six goals and two assists. Man City were the latest side to fail in their bid to slow down the forward, as the 247,188 FPL managers who transferred Pukki out of their side ahead of the fixture were punished for their lack of faith. The Finn has now played seven games for club and country in 2019-20, with only West Ham managing to stop Pukki from finding the net.

Teemu Pukki for club and country this season

Norwich travel to Turf Moor to face Burnley in Gameweek 6, a place where goals are traditionally hard to come by for away teams. The Canaries do have a fine record away from home however, only failing to find the net once in their last 15 away league matches. With Burnley conceding an average of 13 shots per game to the opposition, Norwich and Pukki will fancy their chances of keeping that impressive run going.

With two goals and a Man of the Match performance against Crystal Palace in GW5, it’s fair to say Heung-Min Son (£9.6m) will not be a differential for much longer. The South Korean was in inspirational form and is currently the third most transferred in midfielder this week. Spurs fans will be hoping they have turned a corner in their season as they look to find form for the busy period ahead.

Who's looking to get Son in their team? 🤔

He has some decent fixtures coming up, and with his form at the moment I believe he will bag some hefty points 🔥#FPL pic.twitter.com/yZtfsxs0cB

Up next for Son is a trip to Leicester, a team that he has an excellent record against in the Premier League. In his seven appearances against the Foxes, Son has registered four goals while also notching two assists. Even more impressive though is his record when playing at the King Power Stadium. In three appearances, Son has scored three goals along with two assists at an average of FPL 10.67 points per appearance (12 in 2018-19, 1 in 2017-18 (substitute) and 17 in 2016-17.

For those wanting to get Son in for GW6, he has an incredible recored against Leicester at the King Power stadium.
🅿️ 3
⚽️ 3
🅰️ 2