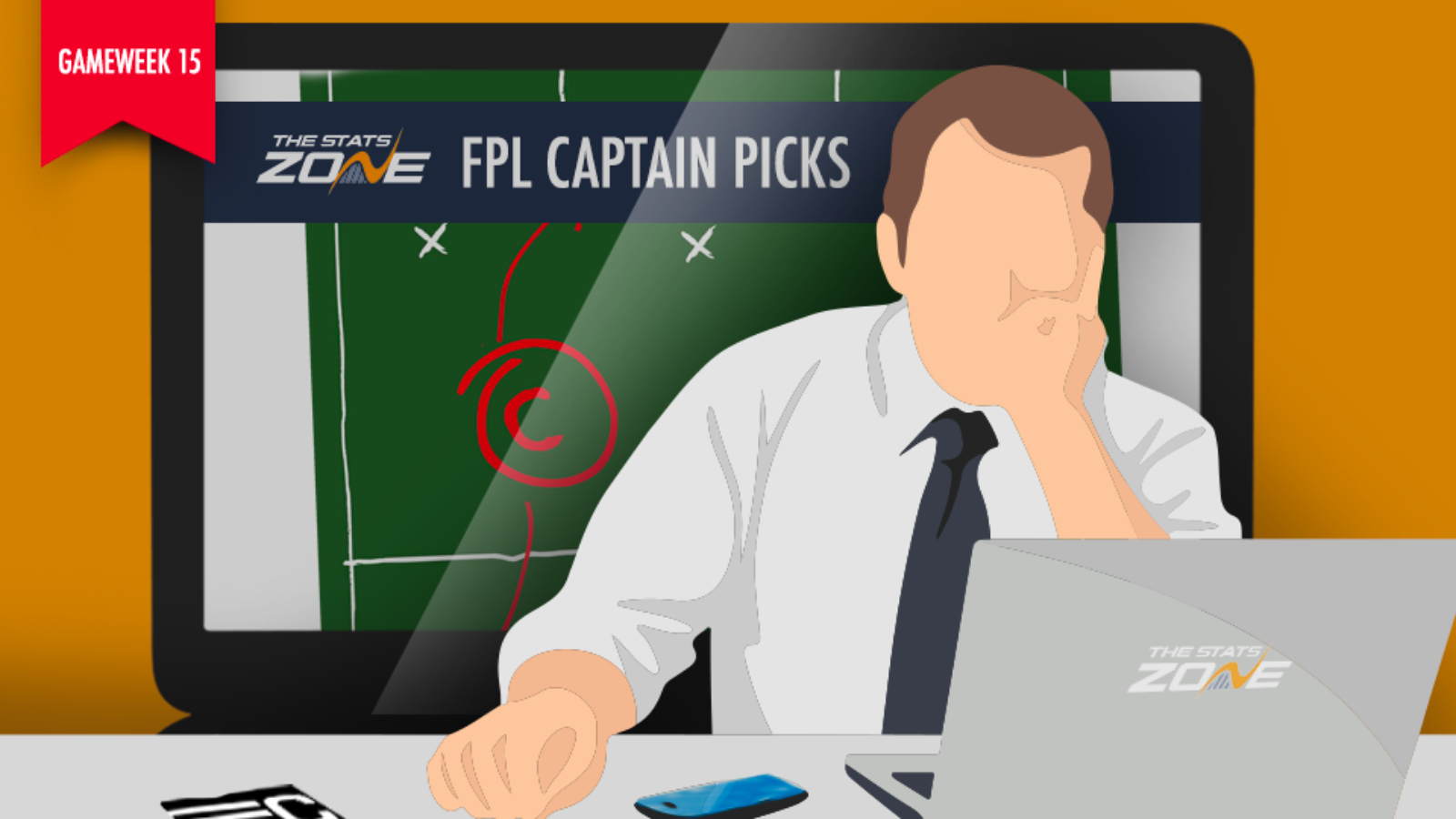 The games are starting to come thick and fast as the festive period draws ever closer. The start of Gameweek 15 comes just 50 hours after the end of Gameweek 14 and both points and positions can be collected at a canter if FPL managers get their captain choices right. Last week's captain picks were hit by the injury curse as Tammy Abraham (£7.9m) landed awkwardly in Chelsea’s midweek Champions League tie and was promptly ruled out of Gameweek 14. His status for Chelsea’s fixture against Aston Villa is currently up in the air as the forward is set to undergo a scan on Monday to reveal the extent of any damage.

You know Tammy Abraham’s not really injured, don’t you? pic.twitter.com/y2HsKOkGZC

Elsewhere on the GW14 captain front Gabriel Jesus (£9.5m) failed to take advantage of Sergio Aguero’s (£11.9m) absence in a fairly listless display before being brought off with five minutes to go. Spurs' mini revolution under Jose Mourinho continued but it was Dele Alli (£8.9m) not Harry Kane (£10.8m) scoring the goals and the points, whilst Sadio Mane (£12.2m) also drew a blank for Liverpool against Brighton. At least Jamie Vardy (£9.9m) kept on scoring.

Of the @OfficialFPL captain picks suggested by @dr_t_blackwell in his article, which player will you be putting the #FPL armband on in #GW14 or tweet us if you have someone else in mind...🤷♂️

With the hope that Gameweek 15 will bring more joy and green arrows lets look ahead to the best captain options ahead of Tuesday’s 6:30pm deadline.

As the weeks role by we’re running out of different ways to wax lyrical over Jamie Vardy’s performances since Brendan Rodgers took over as Leicester City manager. Vardy scored again in GW14 and has now found the net in each of Leicester’s last six matches. The Premier League’s current top-scorer on 13 goals is on pace to smash his current best-ever scoring season in 2015-16, when the forward notched 24 goals in Leicester’s title-winning season. Currently averaging 7.86 points per appearance, if Vardy keeps his current scoring rate up he’ll be getting close to the magical 300 FPL point mark by the end of the season.

Jamie Vardy in the Premier League this season:

Leicester have a home match against managerless Watford as they look to extend their winning run to seven league matches following their last-second winner against Everton. Vardy has scored in each of those victories and will be key again for the Foxes' chances of success. His record against Watford in recent seasons has been impressive, as the forward has scored in each of his last three fixtures against the Hornets. Given the players' current form there’s a good chance that he will find the net for a fourth time in succession.

Gameweek 14 saw Raul Jimenez (£7.7m) register an assist in what was his fourth straight match with an attacking return. After a fairly slow start to the season, which saw Jimenez score just two goals in the opening seven gameweeks, the Mexican has rediscovered the form that made him a fantasy powerhouse during the 2018-19 season. Four goals and three assists over the last seven gameweeks have led to 49 points in that time period. Only Vardy has more points over the same span amongst forwards.

Looking to keep his purple patch going, Wolves host West Ham in Gameweek 15. Despite the surprise 1-0 victory away to Chelsea last time out West Ham have generally struggled on the road recently, conceding three against Burnley and two to Everton and Bournemouth in the matches before Chelsea.

Although Man City’s form might be patchy as of late, Kevin De Bruyne (£10.2m) appears to be rounding back into some form. Following a five match run from GW8 – GW12 in which the Belgian secured just one assist, De Bruyne has now found the net in back to back games, after his strikes against Chelsea two weeks ago and Newcastle last weekend. With Sergio Aguero (£11.9m) injured there appears to be even more emphasis on De Bruyne getting into attacking areas and this can only be good news for his nearly three million owners.

De Bruyne now has 17 more points than Sterling despite being £1.8M cheaper...👕

Looking to get their season on track, City travel to Burnley on Tuesday in a game they really have to win if they are to have any hope on closing the now 11-point gap to league-leaders Liverpool. KDB actually has a relatively poor record against Burnley, with just one assist in three previous league appearances against the Clarets, while he was injured for the corresponding fixture last season. That said the best players seem to find a way of rising to the occasion when needed and in City’s moment of need, De Bruyne represents their best player.

Once again an argument can be made to put the armband on any of Liverpool’s main attacking assets ahead of a mouth-watering fixture with Merseyside rivals Everton. Gameweek 14 saw the return of Virgil van Dijk (£6.4m) to fantasy relevance with a two-goal haul, while Trent Alexander-Arnold (£7.2m) finally got back to his potent best by setting up both goals. Amazingly both Sadio Mane (£12.2m) and Mo Salah (£12.2m) failed to secure any form of attacking return. That had only happened one other time this season – back in the GW7 victory over Sheffield Utd.

Liverpool are 8 points clear when 14 rounds have been played. Why?

- Their goal tending hasnt been great

- Wijnaldum and Fabinho have been outstanding

Mane once again gets the nod over Mohamed Salah (£12.2m), mainly due to his reliability and injury record. Salah was removed from the field of play after 69 minutes against Brighton, meaning he has not completed 90 minutes in the league since Gameweek 8 against Leicester. The Egyptian is may still be struggling a little with his troublesome ankle injury. It therefore once again falls to Mane to carry the Liverpool captaincy hopes.

With the injury to Tammy Abraham, it was expected that Michy Batshuayi (£6.6m) would be the one to lead the line in the GW14 match-up against West Ham. Instead, Frank Lampard decided the match was a good time to showcase Olivier Giroud (£6.6m) ahead of the January transfer window – a decision that drastically backfired as West Ham snapped Chelsea’s winning streak to run out 1-0 winners.

Soooooo........ Chelsea with nice fixtures, home games, scoring for fun, sometimes the simple solution to a transfer is what's just in front of your nose...

Owned by just 1.3% of FPL managers, Batshuayi is expected to be recalled to the starting XI for the midweek match against Aston Villa. Villa are yet to keep an away clean sheet this season, conceding 15 goals in their seven away matches so far this season. Currently giving up a league-worst 22 shots per match when away from home, Batshuayi should have ample opportunity to showcase his talents on Wednesday.