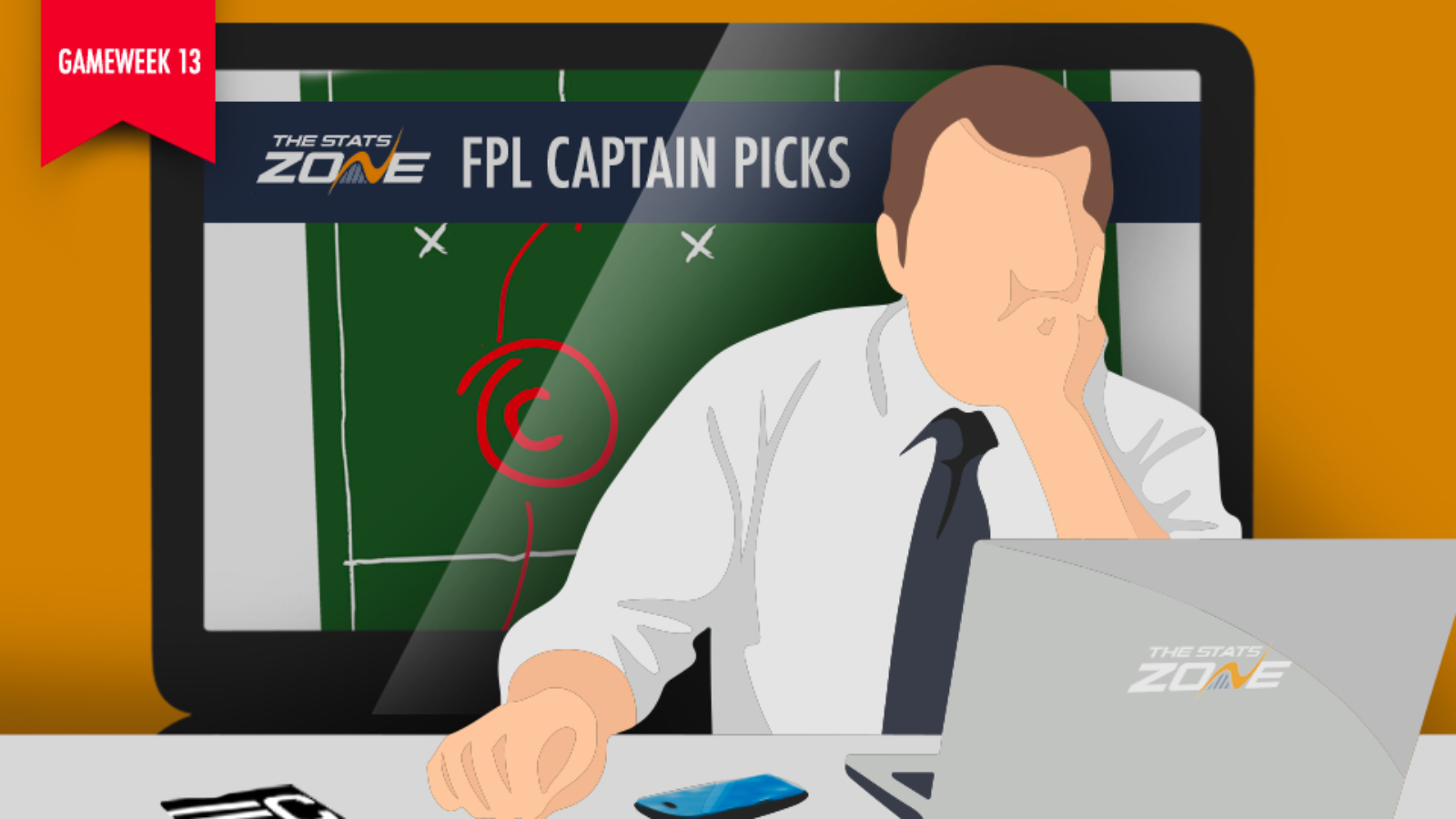 After the success of selecting John Lundstram (£4.9m) as the differential captain for GW11, reality hit home with Gameweek 12’s differential captain selection. We can’t be quite sure what possessed us to pick a player who had not scored or assisted in his previous six matches (now seven) but Teemu Pukki (£6.7m) continued his form, or lack of, with an insipid display against previously winless Watford.

If Pukki can’t score in this game he should be removed from FPL altogether.

Still, there are now two whole weeks to reflect upon the decisions that led to Pukki as FPL managers ‘rejoice’ over a third international break of the season. Here’s hoping it’s injury free. At the very least, Jamie Vardy (£9.6m), Marcus Rashford (£8.6m) and Tammy Abraham (£8.0m) lifted the gloom a little. After being purposely overlooked in the GW12 captain picks, Man City and Liverpool assets are once again under consideration as the top captain options for GW13 are discussed ahead of Saturday’s 11:30am deadline.

There’s a strong argument for just leaving the armband on Jamie Vardy, as with each passing week he continues to assert his will upon opposing defences. Gameweek 12 saw Arsenal become the latest in a long line of Premier League backlines that have failed to contain Leicester’s No. 9. The stats now read 21 goals in 23 matches since Rodgers took over with 175 FPL points in that time period at an average of 7.61 points per appearance. Vardy himself has declared he is in the form of his life and considering he currently holds the record for goals scored in consecutive Premier League matches (11 from GW4 – GW14 of the 2015-16 season), that is some statement.

Can see myself captaining Vardy for the next five GWs 👀👀 pic.twitter.com/TF7D4PKiio

Next up in a fruitless attempt to stop the inevitable are Brighton, who currently have both their first and second choice centre-backs unavailable – Adam Webster (£4.4m) through injury and Lewis Dunk (£4.6m) through suspension. Not exactly ideal! Vardy’s record against Brighton isn’t too shabby either, as he has scored in each of the last three league matches against the Seagulls. It would take a brave manager to bet against him making it four in a row.

With City assets back amongst the captain choices this week, the rollercoaster that is Sergio Aguero (£12.0m) has to be considered an excellent captain option in Gameweek 13 – if he plays – which he will – maybe. It does seem like an eternity ago that Aguero was lighting up the scoreboard with a run of seven consecutive gameweeks with an attacking return. Since then, City’s top goalscorer has returned scores of 2, 0, 1 and 6, 2...hardly ground-breaking! Still, on another day against Liverpool, Aguero would have bagged himself a hat-trick but alas, the game was being held at Anfield – a place where goals have so far eluded the Argentinian throughout his career.

⚽️🅰️ Top players by mins per goal or assist

That said, Man City do represent an excellent bounce-back option for GW13. Following their Gameweek 5 defeat at the hands of Norwich, City smashed Watford 8-0 and Pep will have the side chomping at the bit as they attempt to make inroads into Liverpool’s nine point lead over them. Up next are a Chelsea side that currently reside above City in the league.

Lampard’s young guns have been praised for their attacking verve so far this season but, fortunately for Aguero captainers, he operates at the other end of the field. At that end, Chelsea have been less impressive and chances should come along regularly for City, with Lampard's men yet to record an away clean sheet this season. Aguero also has a fantastic record in this fixture, having scored 10 goals in 13 league appearances against the Blues, including a hat-trick in the equivalent fixture last season.

At the start of the season there were a number of premium options that FPL managers believed would reliably put up points week after week. Come Gameweek 13 and it is Mane who stands out as the only premium player who has consistently put up FPL points on a weekly basis. Another goal in Gameweek 12 against Man City saw the Senegalese international make it seven league goals for the season.

Liverpool face Crystal Palace in GW13, a club who Mane has scored against in his last four league appearances. He’ll also get plenty of chances to continue that streak as Palace concede an average of 13 shots per game at Selhurst Park. Mane currently averages 2.5 shots per game when playing away from home and both scored and assisted in Liverpool’s last away match against Aston Villa.

A goal in each of the last 4 games

Mane 🆚 Palace (with Liverpool) AWAY

Failed to return in on game#FPL

A definite case of fixture over form, Pierre-Emerick Aubameyang (£11.0m) will be looking to get back amongst the goals when Arsenal play Southampton in Gameweek 13. After a blistering start to the campaign, the Gabonese international has been stuttering as of late, scoring just two goals in his last six appearances.

Owning Auba and not owning Vardy is a horrible place to be...

Not making the move this week ~ Auba is the best captain imo.

A match against Southampton offers an excellent cure all to these troubles. The side have now conceded 23 goals since their last clean sheet in Gameweek 5 and it is little wonder given the amount of shots they tend to give up to their opposition. Just last week, Everton had 24 attempts at the Southampton goal. But for a lack of quality, the Toffees would have run up far more than the two goals they scored.

Owned by just 7.1% of FPL managers, Richarlison (£7.9m) has had a somewhat muted start to the season, scoring just three times in the opening 12 matches. Everton’s form has coincided with that of the Brazilians as the Toffees find themselves looking over their shoulder at the wrong end of the table. There were signs that they were starting to turn things around last time out at Southampton; Richarlison led the way in a 2-1 victory on the South Coast and provided a timely reminder to FPL managers of his potential with the winner in that match.

Gameweek 13 also offers the perfect opposition to start a scoring streak, as Everton are the lucky club to face Norwich next weekend. The Canaries' season looks to have sadly peaked on Gameweek 5, where they ran out 3-2 winners over Man City. Since then, their form has been atrocious, with no win in seven, just one point secured, two goals scored and 16 conceded at the other end. Their loss to previously winless Watford in Gameweek 12 consigned the side to the foot of the table. In short, they are the ideal team to pick a captain against.