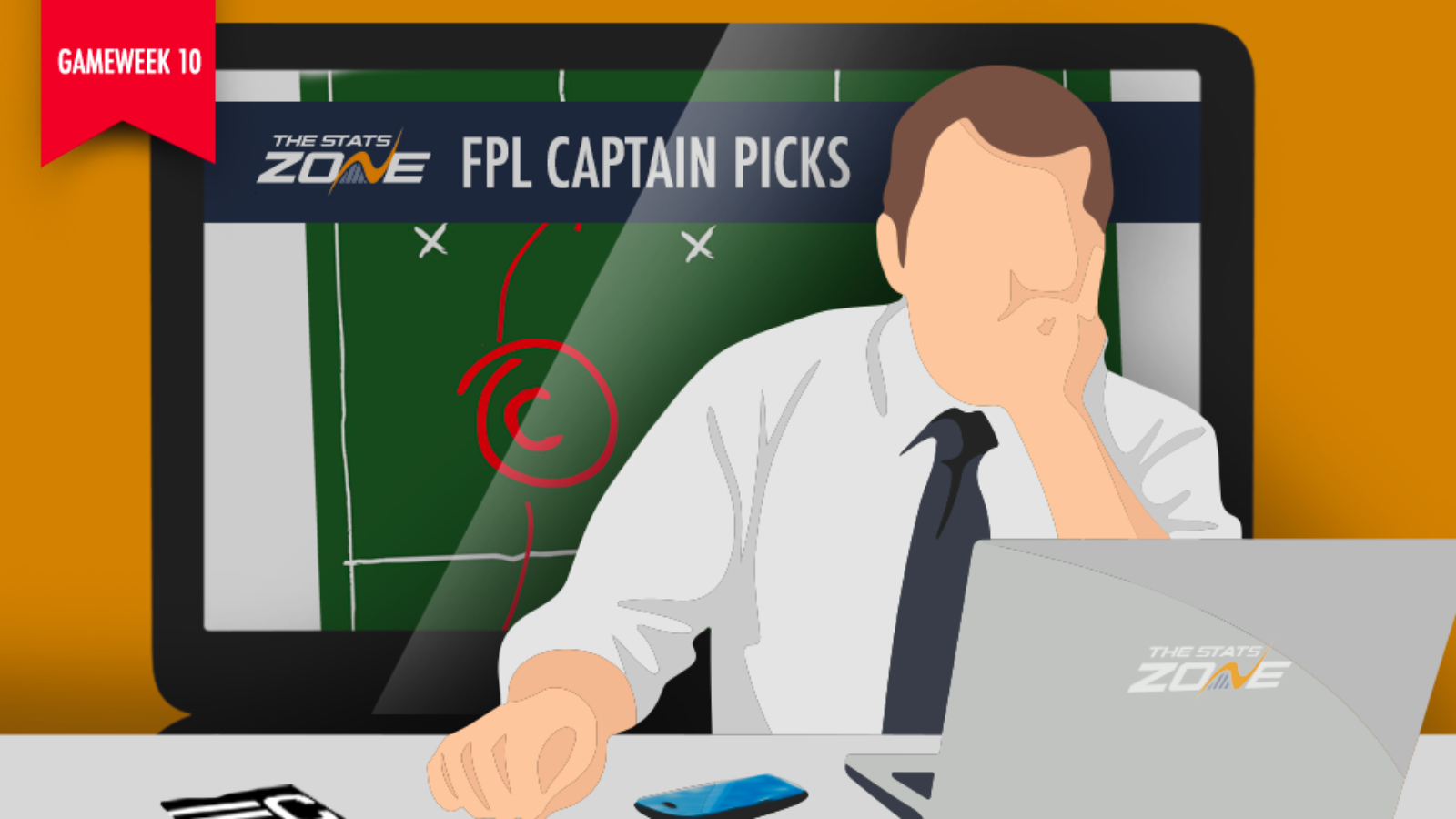 Fantasy football returned with a bang this weekend, though the noise was due to FPL managers slamming/throwing whatever was in reach as the GW9 point scoring reached record-setting lows. An average weekly score of 37 points followed last gameweek's average of 36 points - the first time since the 2014-15 season there has been back-to-back gameweeks with an average less than 40.

1 assist out of all these nominees in GW9. Unbelievable. #FPL https://t.co/poORUIiRVQ

Another to not start last weekend was GW9 differential captain choice Matt Doherty (£6.0m), who at least rescued his gameweek with an assist and four points from the bench. Hoping for a better Gameweek 10, a number of potential captain options are discussed ahead of Friday’s 7.00pm deadline.

With a prime looking fixture at home to Aston Villa at the weekend, the difficulty with captaining Man City assets is choosing which one is likely to start. After being benched for the 2-0 victory over Crystal Palace in GW9, Sergio Aguero started the midweek Champions League win over Atalanta, scoring two goals in the process.

One of the best! pic.twitter.com/VMiBE4foX7

If Aguero is set to play he, is instant captain material and a trend does seem to be emerging with regards to when Guardiola selects Aguero over Gabriel Jesus (£9.5m). Having started every home this season, it would seem Aguero plays the home matches, while Jesus starts away.

I think Kun Aguero will start the next 2 homes.

Last time Aguero didn't start at Etihad in Premier League was GW32 last season vs Cardiff due to groin injury.

Last time Aguero did not start at Etihad and wasn't injured was January 13th vs Wolves in GW22.#FPL #FPLCommunity pic.twitter.com/zEu70asb3L

Despite frustrating owners in Gameweek 9, Raheem Sterling (£12.1m) actually had one of the highest expected goals for any player last weekend, showing he is getting into the right position and a points explosion is potentially on the horizon. While FPL managers may fear that explosion came in the Champions League – three goals and two assists against Atalanta – the match just highlighted what Sterling is capable of on any given matchday.

Biggest #GW9 underperformers based on highest discrepancy in Expected (vs Actual) stats:

Players by position (all 0)

Despite completing 90 minutes in each of the last two games, Pep was effervescent in his praise for the midfielder after the 5-1 win over Atalanta. The manager also mentioned Sterling’s incredible fitness, stating; “the day after a game, he could play another game.” Given his form and these comments, it’s looking hard for Pep to leave him out at the weekend.

The absolute scenes when Sterling is benched on Saturday 😱#FPL

Kevin De Bruyne will also be a popular captain choice and is probably the most assured to get a start. The Belgian was withdrawn after 67 minutes midweek. Currently, De Bruyne averages 13.67 points per match when City play at home and has yet to score less than 11 points when at the Etihad Stadium.

Look at the histories of KDB & Sterling, if we (C) KDB home & Sterling away, we would get a whooping 166 (C) points! Only blank would be Sterling away to Norwich.

With captaincy blanks happening quite a lot this season, something to consider? #FPL pic.twitter.com/3xHUBheLgd

One player afforded ra est midweek was David Silva (£7.6m), who seems certain to be brought back into the starting XI this weekend. With two goals and five assists already this season, the Man City playmaker is also the only player to boast four scores of 10 or more points this season. Given City’s plethora of assets, the little Spaniard is flying a little under the radar. He is also the only player with a greater than 10% ownership to record double-digit points in GW9 and offers a differential captaincy option.

GW8 was one of the worst in recent #FPL history and, incredibly, GW9 was worse.

Only 3 players with over 10% ownership exceeded 8 points last time: this time there was just David Silva (£7.6m).

One of the only players to produce the goods in GW9, FPL managers who captained Vardy last weekend were rewarded with 16 total points. With a goal against Burnley, Vardy took his tally to six for the season, while since Rodgers took over only Mane and Aguero have scored more goals than the Englishman in 2019.

Up there with the best. 💪 pic.twitter.com/omxdesBdTe

A reason a number of FPL managers are seemingly being put off Vardy is his expected goal statistic. Currently standing at just 2.3 and below players like David McGoldrick (£5.4m) and Jordan Ayew (£5.1m), Vardy is massively exceeding this expectation and subsequently players are concerned that his goalscoring form will slow down. To those doubters, it is important to note that Vardy deals in the only statistic that is important – goals – and has done so now over a number of seasons.

But here's a different perspective:

With a second blank in as many gameweeks, the return of Alexandre Lacazette (£9.3m) and an uninspired performance against Sheffield Utd on Monday night, there is much reason to be concerned about regarding the attacking potential of Pierre-Emerick Aubameyang (£11.1m).

Next up for Aubameyang is a match against Crystal Palace, a team who the Gabonese international scored against both home and away last season. The return of Lacazette also shouldn’t put owners off as his record when playing with and without the Frenchman is largely similar. While there is a slight drop of in his goalscoring prowess, it is not so significant to believe the points should completely dry up.

The selection of Salah as a potential captain option may raise a few eyebrows after the Egyptian missed the match against Man Utd with injury. Since then though, Klopp as stated that Salah “looked good” in training and is set to be involved against Genk. Provided he comes through that match unscathed, Salah should be set to play at the weekend.

Klopp on the return of Mo Salah. “It’s absolutely good to have him back,” he said. “The squad is cool, it’s a good squad, everything is OK, but that’s all.”

Currently one the most transferred out players of the round, Salah is becoming a differential in his own right as owners jump ship to teammate Sadio Mane. While not in the best of form, his record against Spurs is extremely good having scored three goals in five Premier League appearances against the North London club. Recently, remaining patient with Salah has been difficult over the past few low-scoring Gameweeks, but it is only a matter of time before the Egyptian rewards those owners who keep the faith.

With the way this season is going for so many of us; are people really going Salah to Mane in droves, and not expecting it to bite them on the arse?

Sods law is in full swing this season.

Owned by just 2.7% of FPL managers at the time of writing, Callum Hudson-Odoi (£6.0m) became the second youngest player in Premier League history to record an assist in three straight Premier League matches. The three have come against Brighton, Southampton and Newcastle and in that time he has returned 18 total points. The winger will look to extend this streak to four when Chelsea travel to Burnley in GW10.

Hudson-Odoi’s low ownership is primarily due to the winger starting the season injured. Having solidified his position on the left side of Lampard’s attack, Hudson-Odoi is not only an excellent differential but also represents real value for money at a price bracket where there are not too many standout options.