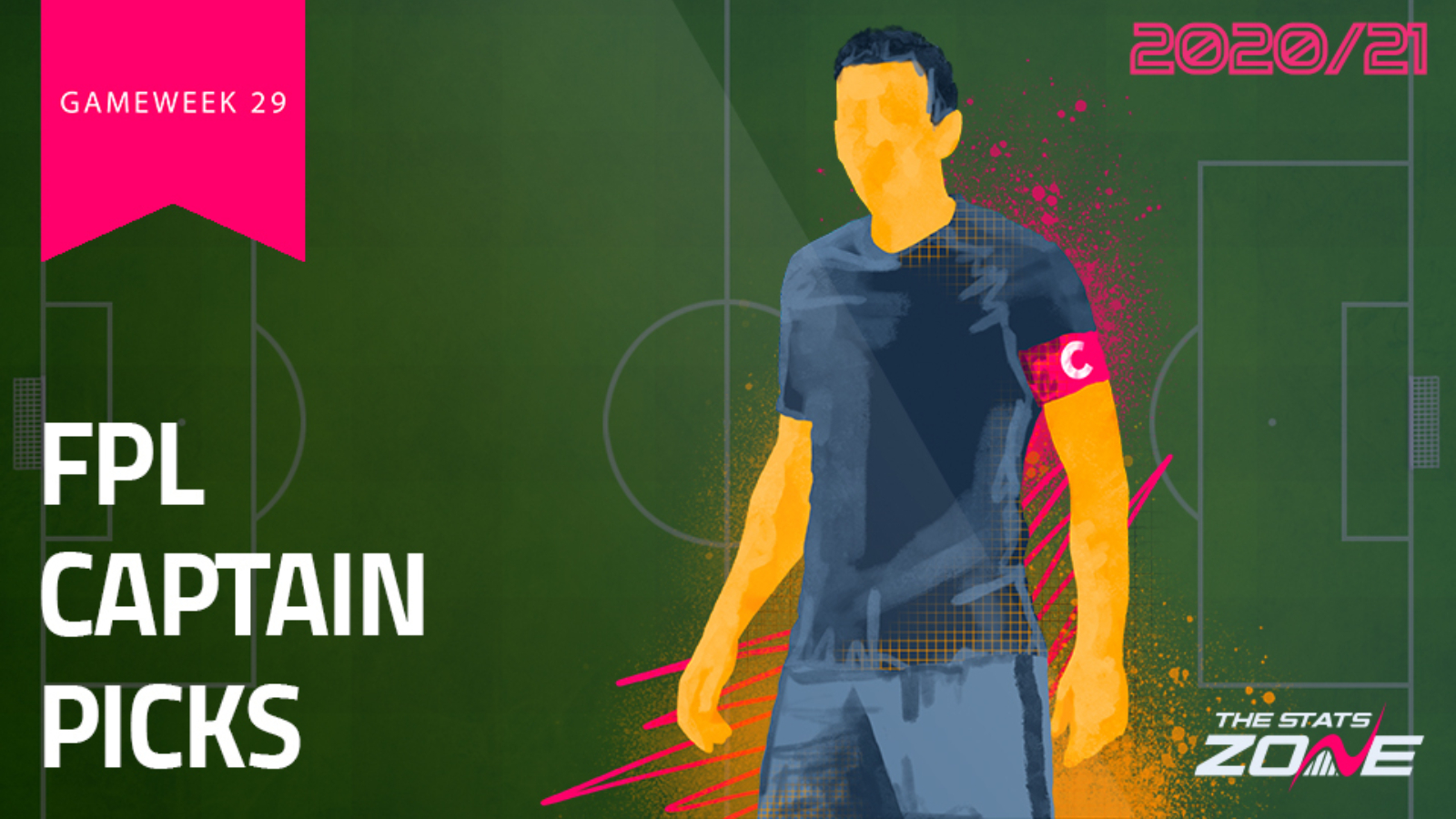 Last week's captain selections were sadly, rather uninspiring and disappointing. Blanks for both Bruno Fernandes (£11.5m) and Harry Kane (£11.5m) were worsened by a non-appearance for City maestro Kevin De Bruyne (£11.9m). Few things are more frustrating than watching Man City breeze past their opponents, scoring three times in the process while your captain selection sits on the bench under a blanket. At least he bagged in both the games directly preceding and following his no-show against Fulham. Things like that really help soften the blow. At least it was a difficult week for the majority of FPL managers as the top five selected captains for GW28 scored a combined eight points between them.

The most-captained players in GW28:

Who had your armband, and how did he score? 🤔#FPL pic.twitter.com/cfCOwSYUaN

At least Jamie Vardy (£10.2m) salvaged some semblance of respectability for last week's article. As expected, Vardy feasted on Sheffield Utd’s porous backline, bagging three assists and 13 points for his managers. His success, coupled to the failures of FPL's popular big-hitters will have meant big green arrows for those who placed the armband on the Sheffield local. Still, some people are never happy.

Equally as predicable as Leicester running riot, was West Brom’s inability to put the ball in the back of the net, meaning Patrick van Aanholt (£5.4m) collected a prized clean sheet. He also got booked as an added bonus. Elsewhere, Erik Lamela (£5.7m) was busy doing peak Erik Lamela things in Spurs' match against Arsenal. For those who haven’t seen his rabona goal, here’s a link to it. You also get the treat of listening to Jamie Redknapp wax lyrical over the finish. Sadly, the absence of Roy Keane meant no-one was there to mention to Jamie that Lamela is an attacking midfielder, and by scoring a goal he’s essentially just doing is his job. After all you don’t get bonus goals for how stylishly it goes into the net Jamie. They all only count as one. We miss Roy Keane. Sensing this absence in the studio, Lamela then spent the second half doing his very best Keane impression before then finally getting sent off for palming Kieran Tierney (£5.2m) in the face. Thanks Erik.

Me after lamela L2 + O the ball: pic.twitter.com/Py5Wv4L2KT

Let us now turn our attention to what is a very mini GW29. Thanks to the FA Cup, just eight teams and four fixtures are to be played this weekend in the Premier League and yet there is still a Friday night match, meaning we once again have a 18:30 (UK) deadline. Let’s discuss the best captain choices:

With just Harry Kane and Pierre-Emerick Aubameyang (£11.4m) exceeding £10.0m this weekend, there are few premium captain options to choose from. As such, let’s have a look at a few differentials choices.

Very few players have been in better form than Jesse Lingard (£6.1m) since his move to West Ham on the 29th of January. Absent from the team squad for being ineligible to fact his parent club, West Ham stuttered to a 1-0 defeat away to Man Utd last weekend. Lingard’s absence highlighted the impact he has made to this West Ham side since his arrival, with the Hammers looking slow and predictable in attack as they succumbed to defeat and failed to find the net for only the second time in 12 league matches.

Lingard should return to the starting XI at the weekend when they face an Arsenal side who he’s had success against in the past. His four goals in eight previous appearances against the Gunners represent the most he has managed against any club during his professional career. Despite looking better in recent weeks – three wins in their last five league matches – clean sheets are still proving hard to come by for the London outfit. The goal conceded against Spurs means its now been seven league matches since they last recorded a shutout, a record that extends to 10 if Europa League results are included. West Ham should get chances and if recent history is anything to go by, Lingard will be heavily involved in them.

There’s definitely an element of chasing the points in this pick. As suggested by a TSZ colleague, Lewis Dunk (£5.0m) was due a goal and he duly delivered last weekend by scoring a thumping header in Brighton’s much needed 1-2 victory over Southampton. It may be too much to ask him to bag again for the second week running but Saturday’s opponents Newcastle have been struggling when it comes to conceding headed chances. With the fourth most headed chances conceded over the last six gameweeks, it seems likely Dunk will be afforded at least one chance this weekend. After all, no central defender has scored more Premier League goals than Dunk (10) since his debut in the competition in August 2017.

Dunk - Newcastle have conceded the 4th most heard attempts in goal in there past 6 where dunk has scored 2 in his last 6 with Brighton 4th for shots conceded better than arsenal Leicester Liverpool , but Cresswell long term

Away from goal hunting, the match against Newcastle offers clean sheet potential for the Brighton captain. Three goals in five matches since Callum Wilson’s (£6.5m) injury, Newcastle has looked toothless in attack. Even with Wilson returning to training this week, he’ll likely need a couple of games to shake the rust off following his extended time on the sidelines. The Seagulls seem to have the Magpies' number in this fixture as well. In the seven times the two clubs have met in the league since 2017-18 Newcastle have yet to win, losing three times and scoring just a single goal in the process. That was back on 27th April 2019, meaning it's been 342 minutes of play since Newcastle last scored against Brighton.

Ok, so one premium option this week. As the only big-hitting forward set to play, Kane should be heavily captained this weekend as Tottenham travel to Aston Villa. It won’t be an easy match either, with Villa having the third best defensive record in the league. 28 goals conceded, 14 clean sheets and just four conceded in their last seven outings illustrate what a tough nut they are to crack. Much like against any team though, Kane has a fabulous record against this weeks opponents. Six Premier League matches have yielded six goals, with Kane only once failing to score against Aston Villa back in the 2014-15 season. Of course, he had a similarly impressive record against Arsenal and look what happened there.

Harry Kane has been in formidable form over the last 5 GWs scoring 4 and assisting 2 goals since GW 23. Despite a blank last GW he sits as the go to captain for GW 29.

Owned by just 0.4% of FPL managers and back from injury with 76 minutes and an assist last weekend, Danny Welbeck (£5.5m) is the pick of the week for those looking for an ultra differential option. Costing just £5.5m, he also represents a cheap third striking option, particularly if Patrick Bamford (£6.7m) fails to overcome the knock he sustained against Chelsea. Brighton also have the best looking fixture on paper, with the side playing host to Newcastle in what could go a long way to seeing who gets relegated at the end of the season. Only West Brom (6.03), Leeds (5.57) and Sheffield Utd (5.41) concede more shots on target per game than the Magpies, while no side has peppered the goal more in recent matches than Brighton.