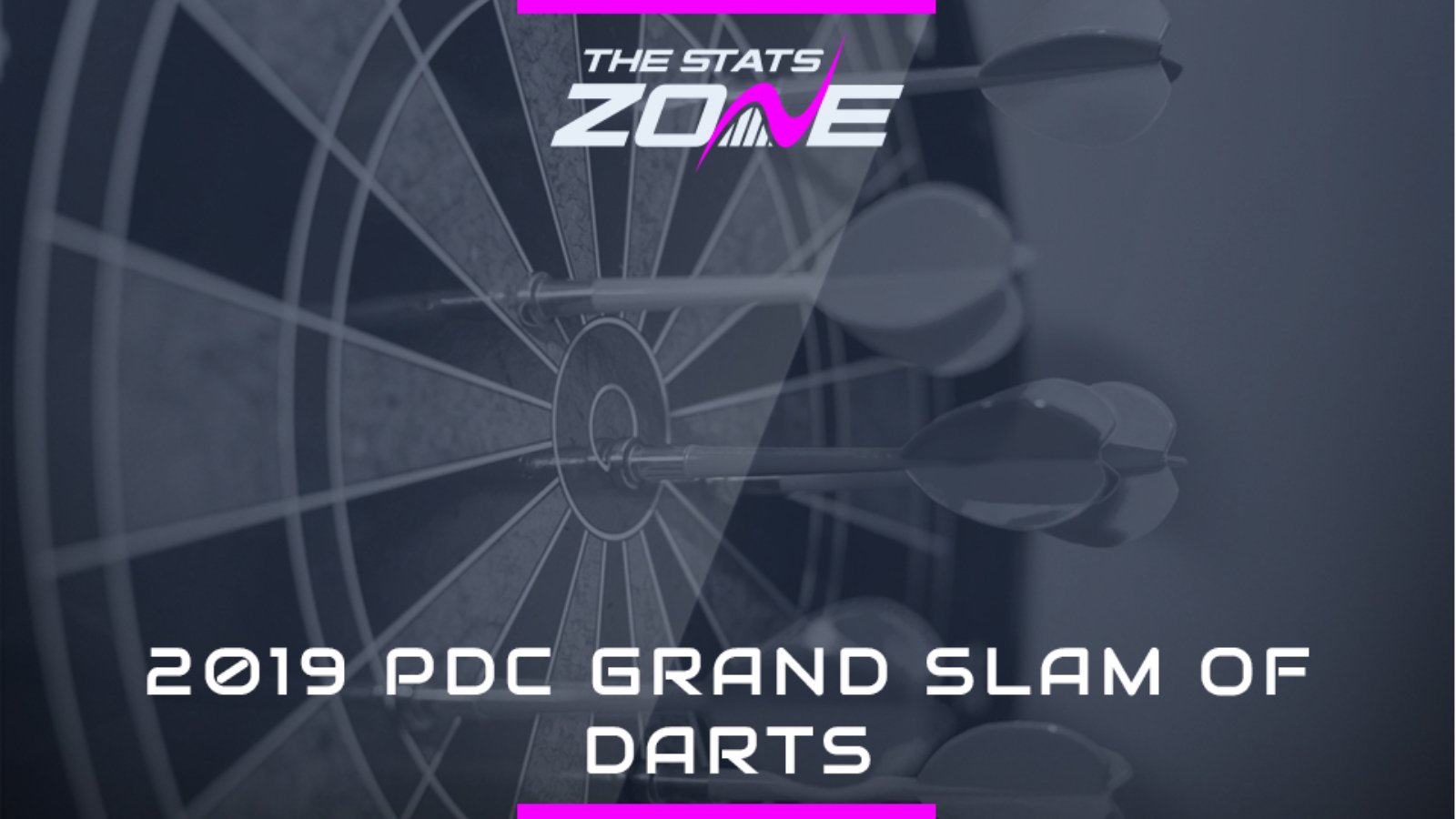 When is the 2019 BoyleSports Grand Slam of Darts taking place? Saturday 9th to Sunday 17th November 2019

What channel is the 2019 BoyleSports Grand Slam of Darts on? The tournament will be broadcast live on Sky Sports

Where can I stream the 2019 BoyleSports Grand Slam of Darts? Sky Sports subscribers can stream the tournament online via Sky Go

Where can I get tickets for the 2019 BoyleSports Grand Slam of Darts? Tickets are available from Ticketmaster and See Tickets

What is the format for the 2019 BoyleSports Grand Slam of Darts? The tournament consists of a field of 32 players from both the PDC and BDO playing for the Eric Bristow Trophy and £550,000 in prize money. The 32 players have been drawn into eight groups of four with the top two from each group progressing to the knockout rounds.

This is the 13th staging of this unique cross-code tournament which is always an undoubted highlight on the darting calendar as PDC and BDO players face-off in competitive action for the prestigious Eric Bristow Trophy and the £125,000 first prize.

Welshman Gerwyn Price is the defending champion having defeated Gary Anderson in a highly charged final last year. Price became only the fifth person to win the title with the previous winners being Phil Taylor (six times), Michael van Gerwen (three times), Raymond van Barneveld and Scott Waites - who is the only BDO player to have triumphed so far.

Here’s is a look at all eight groups, along with predictions on which two players will progress from each group to the knockout rounds.

The short format might not make it a formality but still expect Michael van Gerwen to secure his passage to the knockout rounds. The battle to join him looks very competitive with all three players having a genuine chance. Ross Smith should have some good confidence on the back of a recent win over MVG and he might just be able to edge out Adrian Lewis, who is featuring at the Grand Slam for the first time since 2016, and 2019 BDO World Trophy winner Jim Williams – who failed to win a PDC Tour Card at the start of 2019.

James Wade has twice reached the final here and has only ever failed to qualify from his group on one occasion in 12 previous participations. His excellent consistency of getting through the group stage should stand him in good stead and he is tipped to progress along with Ian White who can improve on his poor previous record by reaching the knockout rounds for the first time.

Gerwyn Price is returning to the scene of his greatest ever darting triumph as it was at this tournament last year when he lifted his first ever major PDC title by defeating Gary Anderson in a controversial final. The Welshman looks well set for a good defence of his title and should make it through. World Youth champion Dimitri Van den Bergh also has fond memories of this venue due to hitting a nine-dart finish here last year on his way to reaching the quarter-finals. The young Belgian can finish ahead of Robert Thornton and reigning BDO Women's champion Mikuru Suzuki from Japan, who can’t be written off from causing an upset by winning one of her three matches over this short format.

Gary Anderson was bitterly disappointed to lose the final here last year and will be determined to go one better on this occasion. Anderson states how much he loves this tournament and his record of never having failed to qualify from his group in 12 occasion backs this up. The Flying Scotsman is not expected to slip up in a favourable group. The battle for second place should be between Darren Webster and William O’Connor. Webster has had a very poor 2019 and with a title won in 2019, O’Connor gets the nod.

This is an extremely competitive group and it would be no surprise to see the qualification situation on a knife-edge right up to the final match. Rob Cross has proven his class by winning the World Matchplay and European Championship this year and he is tipped to progress along with Dave Chisnall who has enjoyed a good resurgence in form in 2019. Lisa Ashton, flying the flag for BDO and women’s darts, should give a good showing, but such is the toughness of the opposition it is hard to see her going through.

Peter Wright is the standout name in this group. Snakebite has not failed to qualify from his group since his debut in 2013 and he should have the quality to ensure he qualifies again. Dutchman Danny Noppert qualified for the tournament having reached the final at the World Series of Darts Finals last weekend and he can use the confidence gained from that tournament to finish ahead of Ryan Harrington and Wayne Warren.

Surprisingly, this is only Daryl Gurney’s second ever appearance at the Grand Slam – his only previous appearance was in 2017 when he topped his group and reached the quarter-finals. The Northern Irishman has a decent enough draw and should be capable of finishing first in this section. The battle to join him should be tightly contested with his fellow countryman Brendan Dolan predicted to go through. Dolan has won two tournaments since August and averaged around 112 in his final match in qualifying for this event.

This mouth-watering group is surely the toughest on paper and whoever comes through will have been made to work extremely hard to do so as it contains the number three seed Michael Smith, UK Open champion Nathan Aspinall, three-time BDO world champion Glen Durrant, not to mention World Youth Championship runner-up Martin Schindler. In such a tricky group, it is hard to be confident of who will go through but Durrant and Aspinall are the predicted duo.