Coronavirus in Sport – the impact on Football 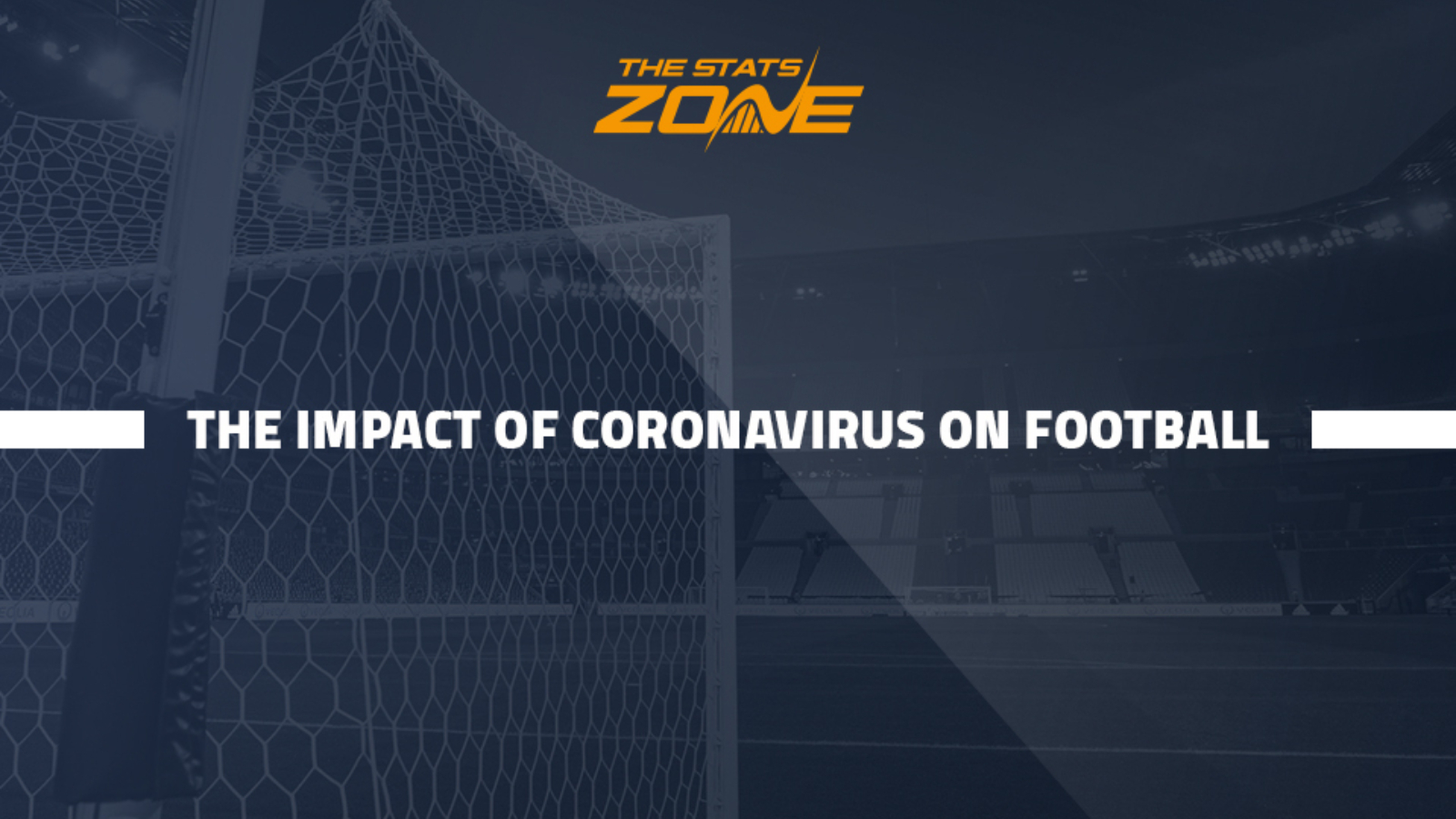 This is a continuously updated list of how football federations around the world have responded to the developing coronavirus pandemic. For information on how the virus has affected other sports, click here.

4th May - The Hyundi A-League clubs are preparing to restart the competition in August with Wellington Phoenix set to base themselves in New South Wales for a two-week quarantine period.

24th March - Football Federation Australia have announced the postponement of the final rounds of the Hyundai A-League effective immediately.

18th March - The Hyundai A-League will continue to be played behind closed doors and the FFA have decided to postpone and bring forward some matches.

18th March - The Austrian Bundesliga has been postponed until further notice.

7th April - An initial plan to resume the Superliga season has been made with the target date of 17th May being suggested.

5th May - The Premier League is targeting a return to training in small groups from May 18, but four club doctors have expressed reservations about the league's Project Restart proposal.

22nd April - The National League announce that all remaining matches are cancelled in the National League, North and South. A further vote and decision will be made on the potential outcomes of those leagues in early May.

5th April - The Premier League acknowledge that a resumption at the start of May is highly unlikely and the 2019/20 season will only restart when it is safe and appropriate to do so.

31st March - Spurs chairman Daniel Levy has announced that 550 non-playing directors and staff at the club have been furloughed.

27th March - The Premier League, EFL and PFA issue a joint statement stating that "difficult decisions will need to be taken to mitigate the economic impact of the current suspension of professional football in England." The leagues will not restart any earlier than 30th April.

26th March - The FA and NLS have announced that the seasons of all Non-League clubs competing in Steps three to six of the Non League pyramid are to end immediately with all results expunged. They have announced the conclusion of all grassroots football this season, whilst tiers three to seven of the women's football pyramid are to also end immediately with all results expunged.

25th March - The PFA have called for an urgent meeting between themselves, the Premier League and the EFL to discuss the financial impact COVID-19 is having on players and clubs alike.

25th March - A statement from National League side Boreham Wood reveals that the National League have met with the FA and asked to end the rest of the Non League season.

19th March - Premier League, FA, EFL and WSL collectively agree to extend the postponement of professional football in England until no earlier than the 30th April 2020.

18th March - The EFL are providing financial relief to their clubs with a £50m short-term package that will advance Basic Award payments to the clubs immediately and offer an interest-free loan facility to them.

17th March - The National League decided to suspend its competition until 3rd April 2020 at the earliest.

16th March - The FA made a further announcement that all FA competitions including those outside of the professional game (ie. all grassroots football) should be postponed until 3rd April.

13th March - Premier League, FA, EFL and WSL collectively agreed to postpone professional football in England until 4th April 2020, where medical advice and conditions would then be considered.

24th March - Paris St Germain have made a donation of €100,000 to the Secours Populaire to aide them against the COVID-19 crisis.

13th March - Following announcements by the French president, the LFP’s administrative council unanimously decided to suspend the Ligue 1 Conforama and Domino’s Ligue 2 championships with immediate effect and until further notice.

24th April - The German Cup final (DFB-Pokal) has been postponed indefinitely from its original date of May 23.

23rd April - The German Football League (DFL) have met with clubs to discuss a restart
of the season in May.

6th April - Bayern Munich return to training in small groups in coordination with government policy and the relevant authorities after the DFL's proposed break from training ended on Sunday, April 5th.

16th March - The DFL have agreed to postpone the Bundesliga and Bundesliga 2 until April 2nd.

23rd March - The Irish Football Association extends the suspension of the Northern Irish football season at both domestic and grassroots level until April 30th.

27th April - The Italian prime minister announces that Serie A teams can resume individual training on 4th May with collective training restarting on 18th May as the lockdown in Italy begins to ease. There has been no formal announcement but there is speculation that the league may resume behind closed doors at the end of May or start of June.

16th March - Serie A team met with the league during a video conference and reiterated their desire to complete the season.

10th March - The Italian Football Association (FIGC) announced that all matches in all women’s football competitions Serie A TIMVISION, Serie B, Primavera and Italian Cup Championships TIMVISION would be suspended in accordance with the Italian Prime Minister’s decree of 9th March.

9th March - Lega Serie A suspends all its competitions until further notice.

19th March - The J-League decide to apply changes to the format of their competitions to apply exceptional rules for promotion/relegation. Relegation will be cancelled but promotions will remain in place. The decision was made based on the fact that the competition could be seriously impacted by matches played behind closed doors, tight schedules and a difference between the number of home/away matches, so relegation has been removed so teams are not adversely impacted even further.

10th March - J-League chairman Mitsuru Murai announces that the league and clubs have agreed to extend the suspension of matches until 3rd April.

25th February - The J-League announce that all four of their competitions have been postponed until 15th March due to the coronavirus.

4th May - The Luxembourg Football Federation (FLF) have had clarification that they can cancel their season and the 2020/21 campaign has been described as a 'transitional' one.

14th March - The Royal Moroccan Football Federation has announced the suspension of all football activity in the country.

24th April - The KNVB announced that the Eredivisie season has been abandoned for the season with no title winner and no teams relegated. The move comes after the national government banned major events until 1 September because of coronavirus.

12th March - The start of the new Eliteserien season has been postponed until April 15th.

25th April - Following confirmation from the Polish prime minister that football could resume in May, the Ekstraklasa is aiming to restart on the weekend of 29th May.

13th March - PKO Bank Polish Ekstraklasa is postponed with no plan to resume matches until the end of March or further.

12th March - It is announced that Liga NOS has been suspended indefinitely.

19th March - The Scottish FA join the English organisations in extending the suspension of all football until 30th April, 2020.

13th March - The Scottish FA board decide to suspend all professional and grassroots football in the country under the jurisdiction of the Scottish FA until further notice.

24th April - The K-League have announced that its top-flight K League 1 and the second-tier K League 2 will both begin their 2020 seasons on May 8.

30th March - Barcelona announce that its players will take 70% wage cut during the COVID-19 pandemic, along with making additional payments to ensure the non-sporting staff at the club continue to be paid their wages in full.

25th March - The RFEF have pledged €500m to help club's struggling financially, to be paid back over a period of five years, along with a pledge to loan €4m to non-professional men and women's teams.

23rd March - All football in Spain, including La Liga has been put on hold indefinitely by the RFEF.

17th March - Spanish FA president Luis Rubiales reiterates the desire to complete all their competitions by 30th June, although that is not a ‘fixed date’. Financial support for smaller clubs is guaranteed.

12th March - LaLiga announces that their competitions will be suspended for at least the next two matchdays with that decision being reviewed in due course.

2nd March - The SFL extends the suspension of all football activities with no league matches to be played until further notice.

28th Feb - The Federal Council in Switzerland immediately bans all events with more than 1,000 people until at least 15th March, 2020. The Swiss Football League postpones all games in Round 24 of the Super League and Challenge League.

21st April - The Swedish Allsvenskan and Superettan will start around 14th June with the aim to play all matches with fans in the stadium.

18th March - The start of the Swedish Allsvenskan has been delayed until the beginning of June with the remaining matches in both the Men and Women's Swedish Cup also postponed.

29th March - Goalkeeper Rustu Recber, Turkey's most capped player is in a critical period in hospital after testing positive for coronavirus.

19th March - The Turkish Football Federation and Minister of Sports announces the indefinite suspension of all football in Turkey.

16th March - The Turkish Football Federation announces that matches will continue to be played and they will be played behind closed doors until the end of April. This applies to the top three tiers of Turkish football.

23rd April - UEFA announce that the postponed UEFA Women’s EURO 2021 will be played in England from 6 to 31 July 2022. It is planned to use the same venues that were
originally proposed to host the event.

17th March - UEFA announce, in agreement with European Club Association, the European Leagues and FIFPro Europe, that UEFA EURO 2020 is postponed for one year until 2021 with a start date of 11th June 2021 until 11th July 2021.

In addition, “All UEFA competitions and matches (including friendlies) for clubs and national teams for both men and women have been put on hold until further notice. The UEFA EURO 2020 play-off matches and international friendlies, scheduled for the end of March, will now be played in the international window at the start of June, subject to a review of the situation.”

A working group has been created to explore the possibilities of when 2019/20 UEFA Champions League and UEFA Europa League can be completed.

15th March - UEFA postpones all UEFA club and national team matches for the week ahead.

12th March - UEFA calls meeting for European Football Stakeholders scheduled for 17th March to discuss the impact of COVID-19 and the future.

25th March - Major League Soccer announce that the suspension of all team training has been extended through to April 3rd.

19th March - Major League Soccer announce that the suspension of all matches has been extended with a target return date now being 10th May, 2020. The league reiterated their desire to complete the full season.

15th March - The MLS extend their directives to teams and players with regards to training with the expectation being that players would remain in each club’s respective locality and they should exercise safe social distancing up to and including 20th March.