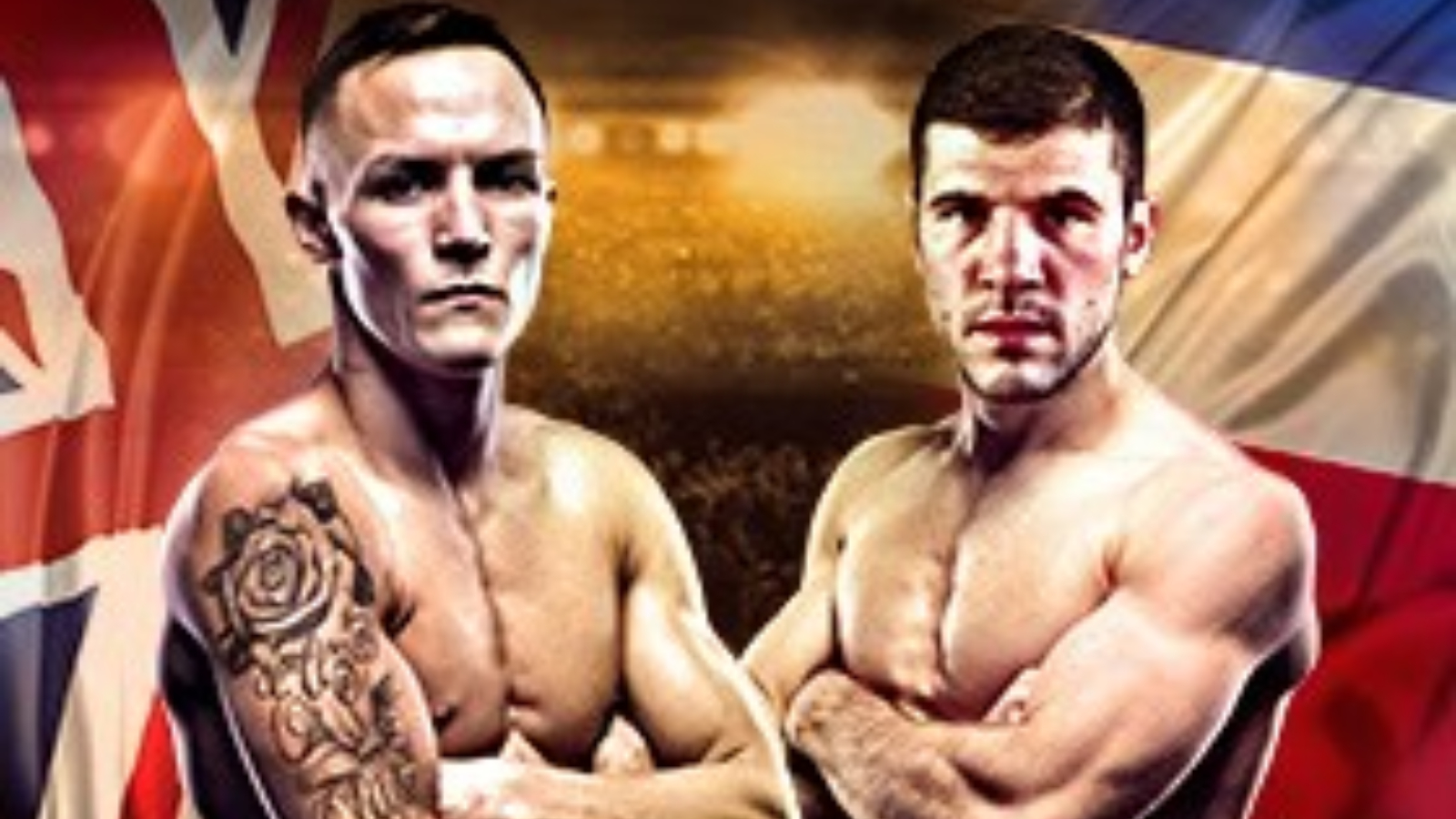 What channel is Josh Warrington vs Sofiane Takoucht on? BT Sport 1

Where can I stream Josh Warrington vs Sofiane Takoucht? BT Sport subscribers can stream the fight via the BT Sport website.

For viewers in the United States, the fight will be shown live and available to stream via the ESPN+ website and app.

Josh Warrington steps back out on to his home patch to defend his IBF featherweight strap for the third time. He will have to wait a little longer for a big unification fight as the highest ranked IBF fighter available, Sofiane Takoucht, has been given the opportunity to be his banana skin. 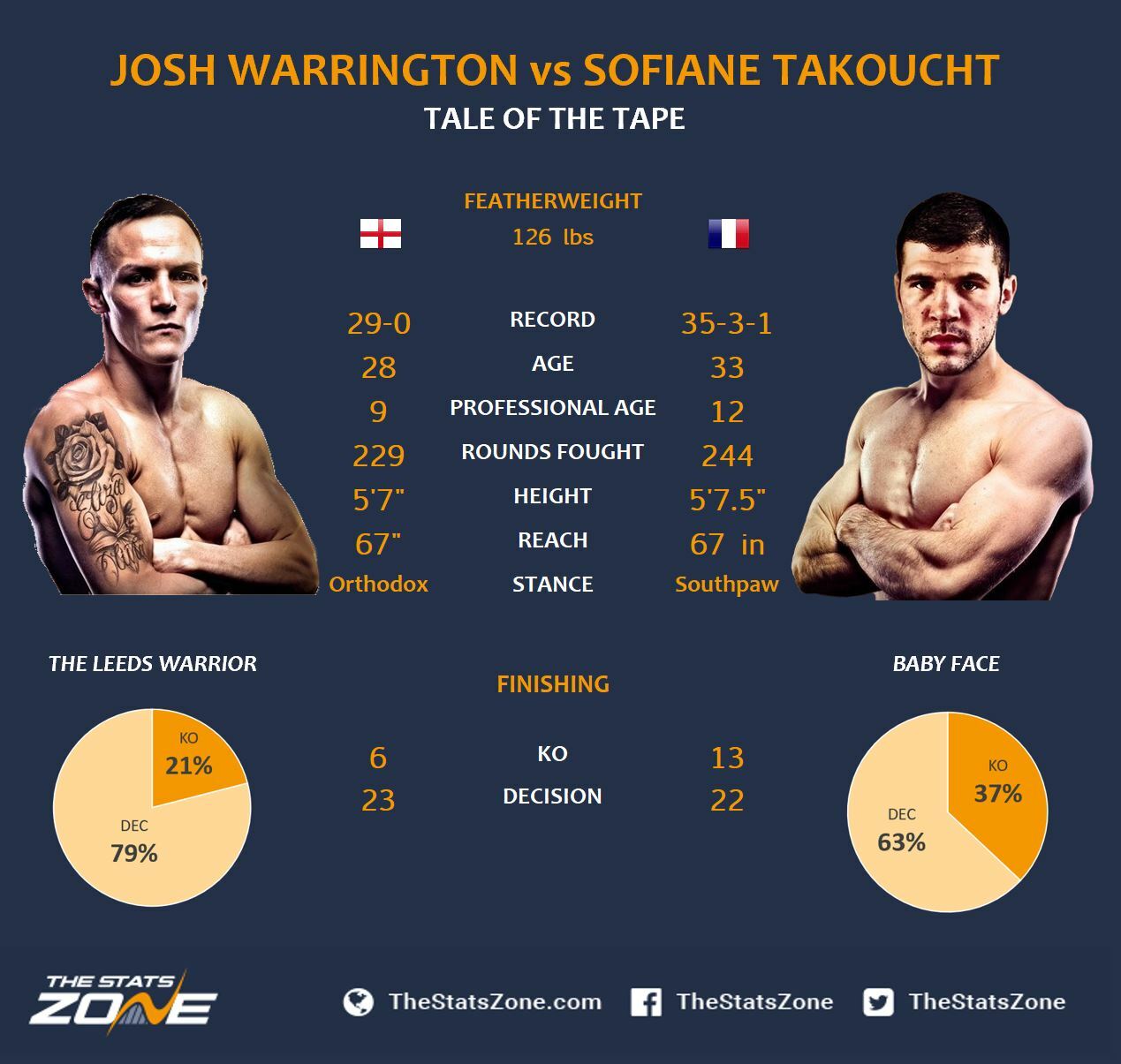 This will be Takoucht’s first fight in the UK and although he is not that well-known, he has amassed a lot of experience and is a talented southpaw. Physically, they match up very similarly and most of their victories have come via decision with Warrington boasting the perfect record. Takoucht’s record is also very impressive with only three losses without ever been knocked out. 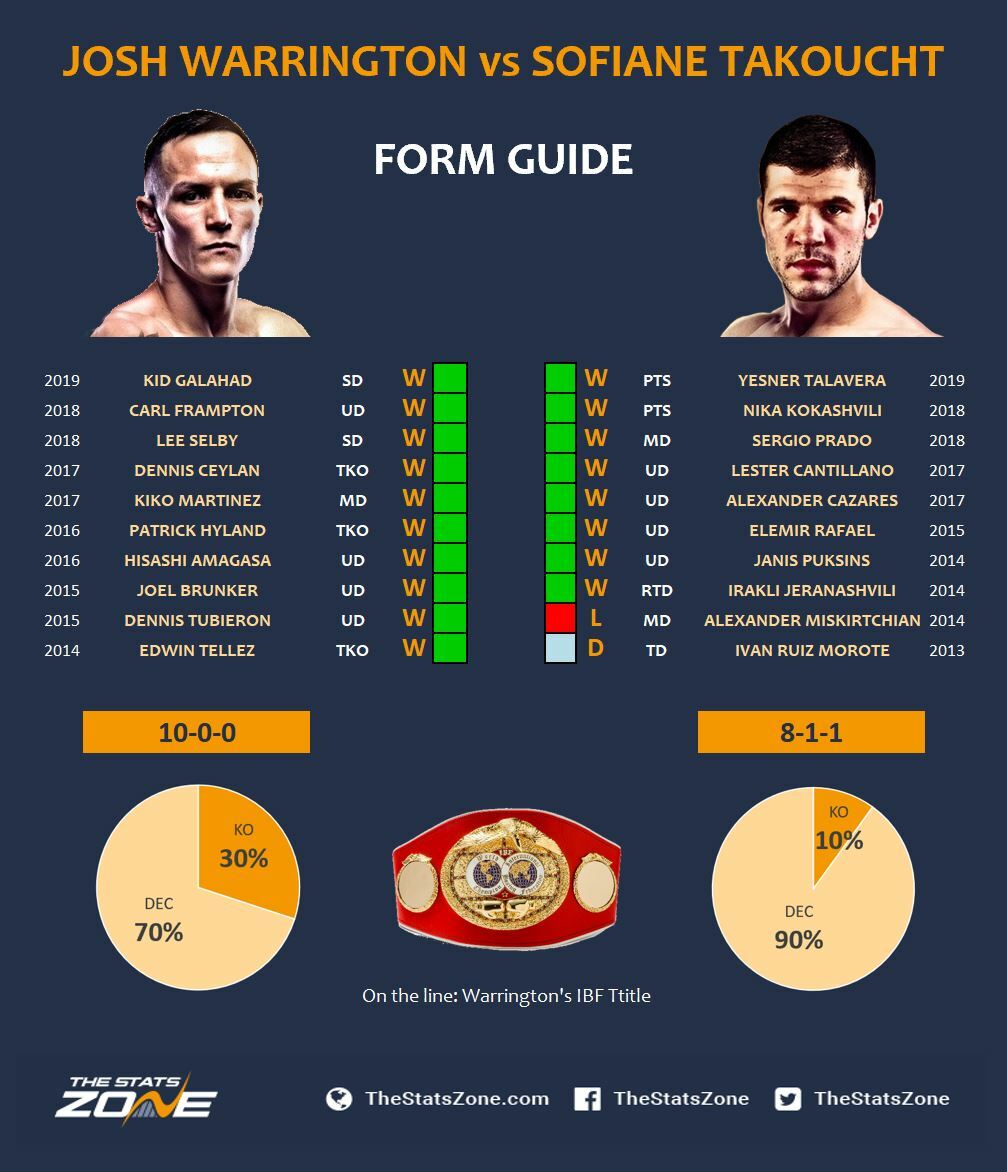 Both fighters have been very active in the last three years with Warrington striding into his prime, adding huge names to his record, but Takoucht is also riding an eight-fight winning streak. Although the Frenchman has earned more knockouts than Warrington, he has not finished a fight since 2014.

Takoucht has earned some notable wins but they do not compare to Warrington’s. He has become a deserved champion after dethroning Lee Selby and defending the IBF title against Carl Frampton and Kid Galahad who had only lost two fights between the three of them.

Let’s take a closer look at their opponents to see how they compare focusing on their last 15 fights: 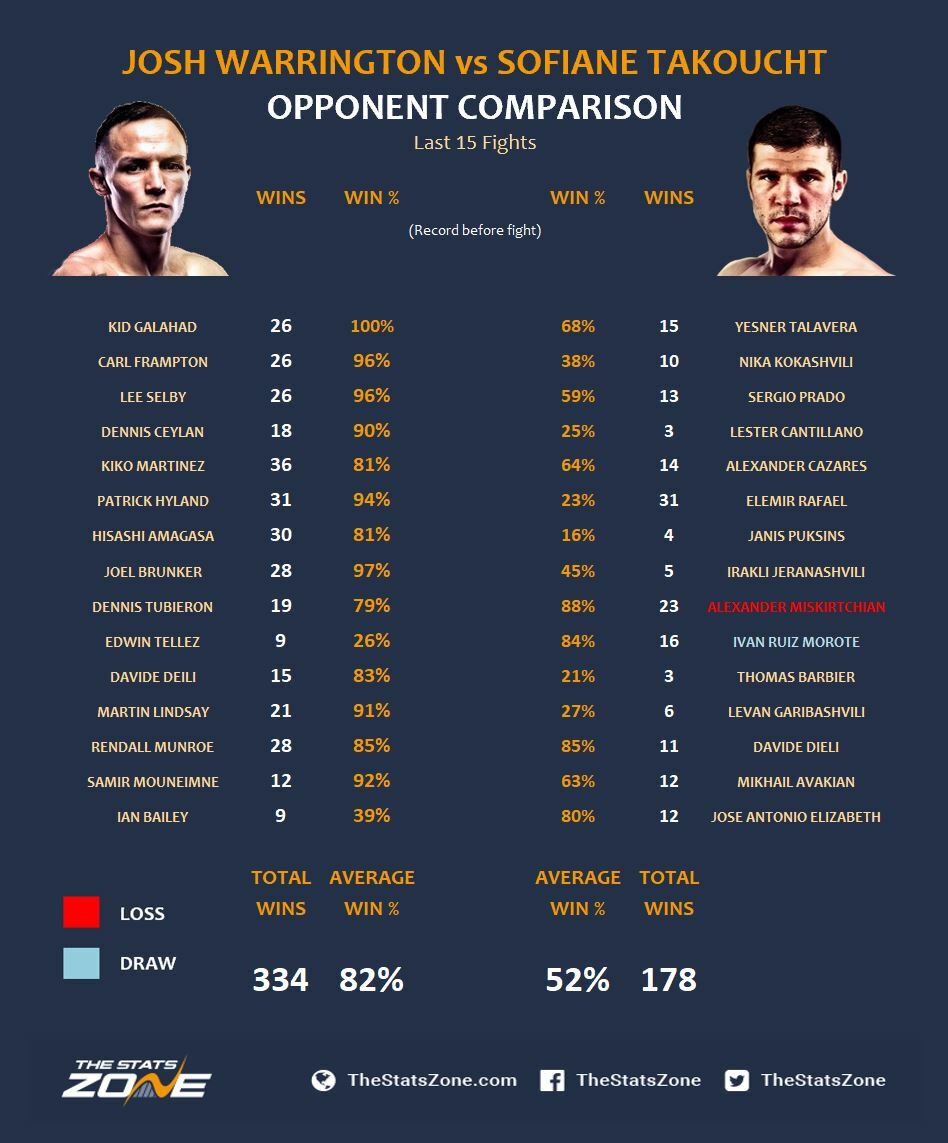 Takoucht has had to settle on lower profile fighters mainly on the French circuit, fighting opponents with poor records, and the fighters with better records he has lost to – Alexander Miskirtchian twice and Guillaume Frenois.

Looking at the stats and the ambition of ‘The Leeds Warrior’, he has little to gain and everything to lose. He has been hoping for a unification bout with the WBA champion Leo Santa Cruz and promoter Frank Warren was interested in Warrington moving up in weight to take on Oscar Valdez. So, a win over Takoucht will raise his stock slightly but if he suffers a loss, he can kiss those fights goodbye.

Warrington will be the heavy favourite but he will need a special performance to finish the Frenchman. Takoucht is very tough and durable and we expect him to rise to the occasion and make Warrington work hard for the victory. He is also a hard-hitting southpaw and will pose a lot of problems so Warrington will have to prepare just as hard as his prior title fights.

As there is a high chance this will go to a decision it is interesting to point out the stats in fights scheduled for 12 rounds: 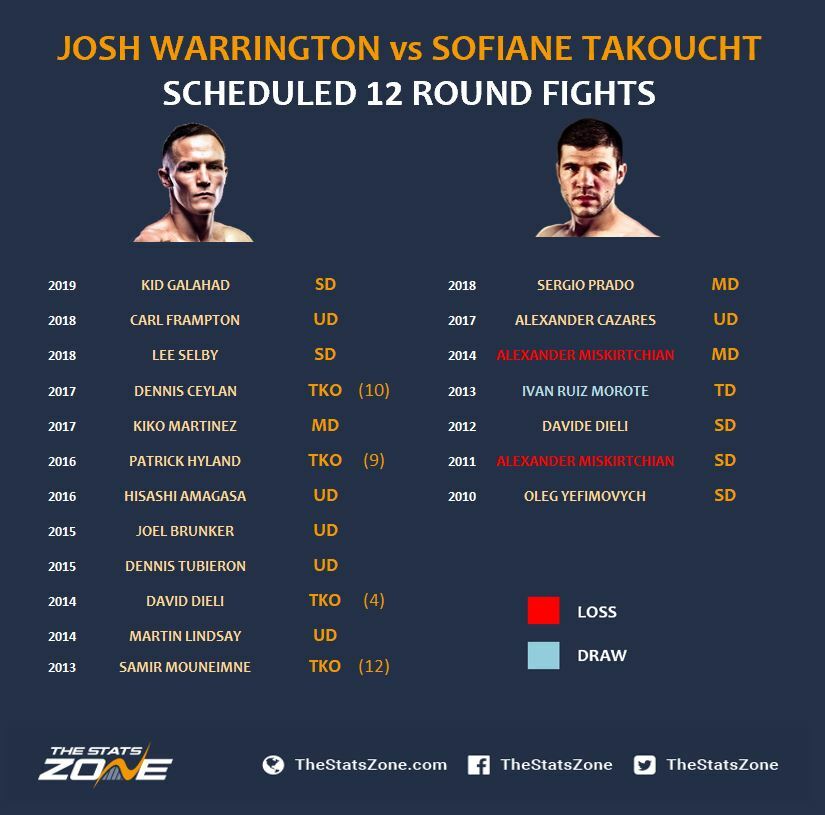 In Takoucht’s 39 fights, he has only had to prepare for seven 12 rounders in which he lost two and drew one of them. Warrington on the other hand, lives for 12 round fights and even gets stronger as the fight progresses; capable of late knockouts.

This is one of the most impressive attributes of the Yorkshireman and why he will be the heavy favourite. He does not posses one-punch knockout power but he is a machine with immense cardio and will keep up a relentless pace on Takoucht.

All of the pressure will be on Warrington but Takoucht will be threatening for the first half of the fight and has the power to rock the champion. However, Warrington has the experience, speed, technique, stamina and comfort of fighting in front of his home fans at the First Direct Arena for the 11th time. If he doesn’t pile on enough damage to find a late knockout he should cruise the decision.