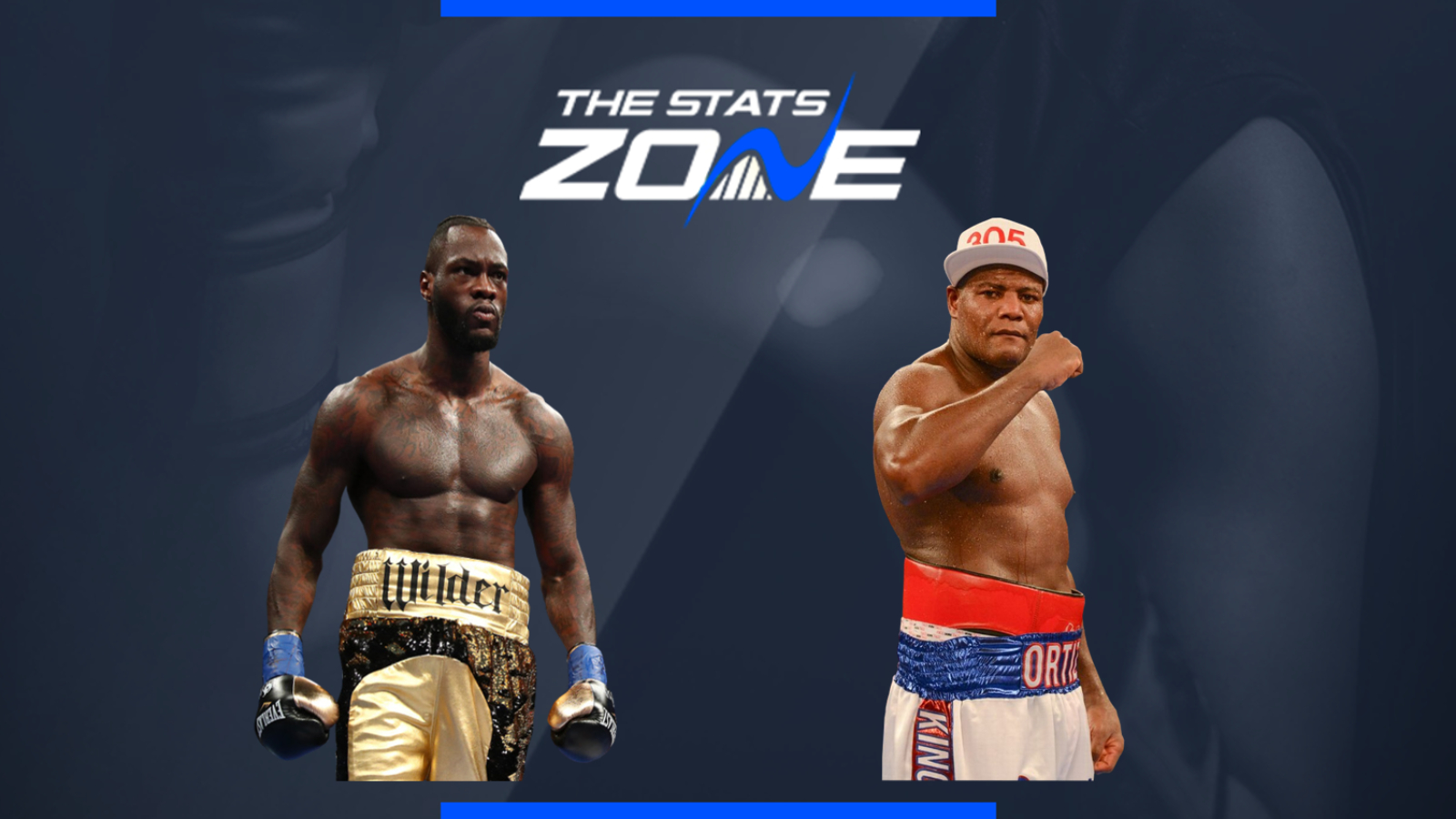 What channel is Deontay Wilder vs Luis Ortiz? Sky Sports?

Where can I stream Deontay Wilder vs Luis Ortiz? Subscribers can stream the fight via Sky Go

For viewers in the United States, the fight will be shown on Fox Sports and available to stream via the Fox Sports Go website and app.

Deontay Wilder has accepted a dangerous rematch with Luis Ortiz who gave ‘The Bronze Bomber’ the most trouble he had received in his career until he met Tyson Fury. A big gamble, but if it pays off, the huge rematch with ‘The Gypsy King’ awaits.

Wilder defends his WBC heavyweight title at the MGM Grand Arena and the fans are in for another great fight but no one is more grateful than Ortiz who fills the time we wait for that rematch with Fury.

Let’s take a look at the tale of the tape along with their last 10 fights: 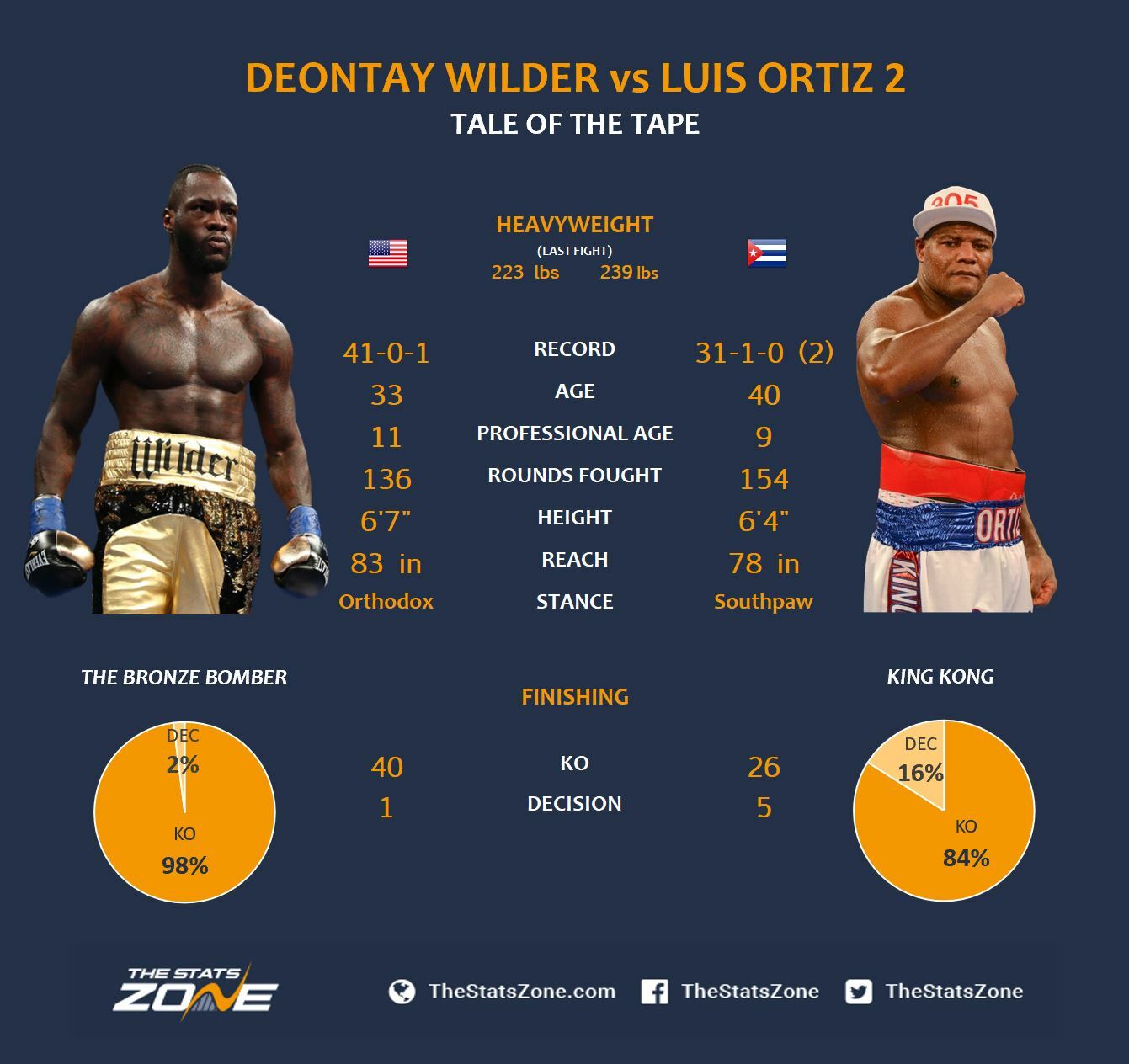 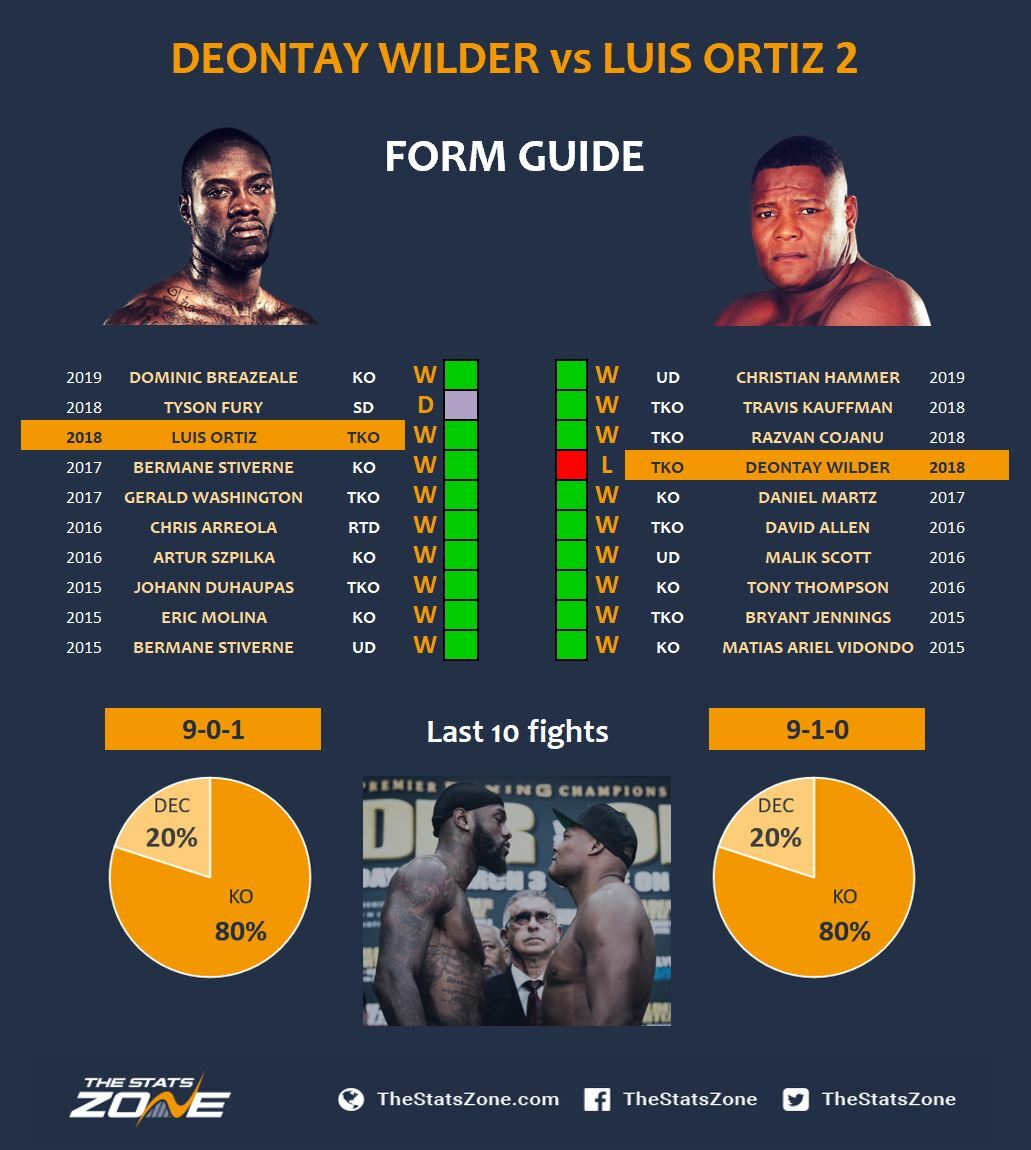 Wilder bosses the stats on paper. He has the youth, the wins, the reach and the ruthless knockout stats but the focus is on their fight last year. This is Ortiz’ only blemish on his record but it was a back and forth war and it served Wilder the most damage he had ever received.

Since then, Ortiz has strung three impressive wins together showing, that his dubious age is not a factor. Wilder has only fought twice. Firstly, the epic battle with Fury in which he was getting outclassed until he dropped ‘The Gypsy King’ to save the fight in the eyes of the judges. With everyone yearning for a rematch, Wilder picked Dominic Breazeale to bide his time but made an emphatic statement by burying him in the first round.

Let’s focus on their encounter back in March, with highlights provided by BT Sport:

Wilder was as dangerous as ever, but Ortiz was showing great defence and phenomenal reactions by slipping bombs and continuously offering counters. Wilder struggled with the southpaw, eating jabs and body shots but he was always threatening. 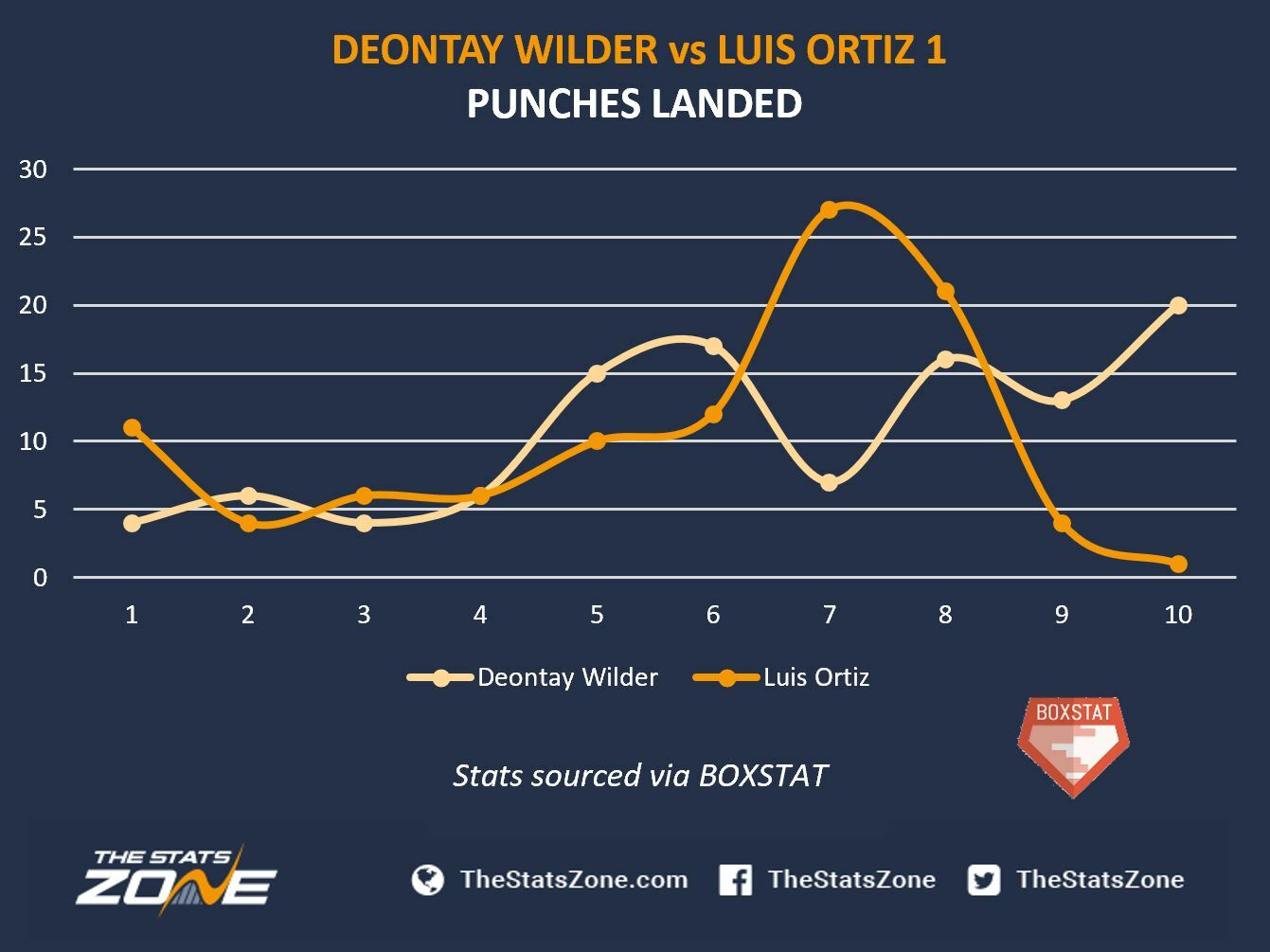 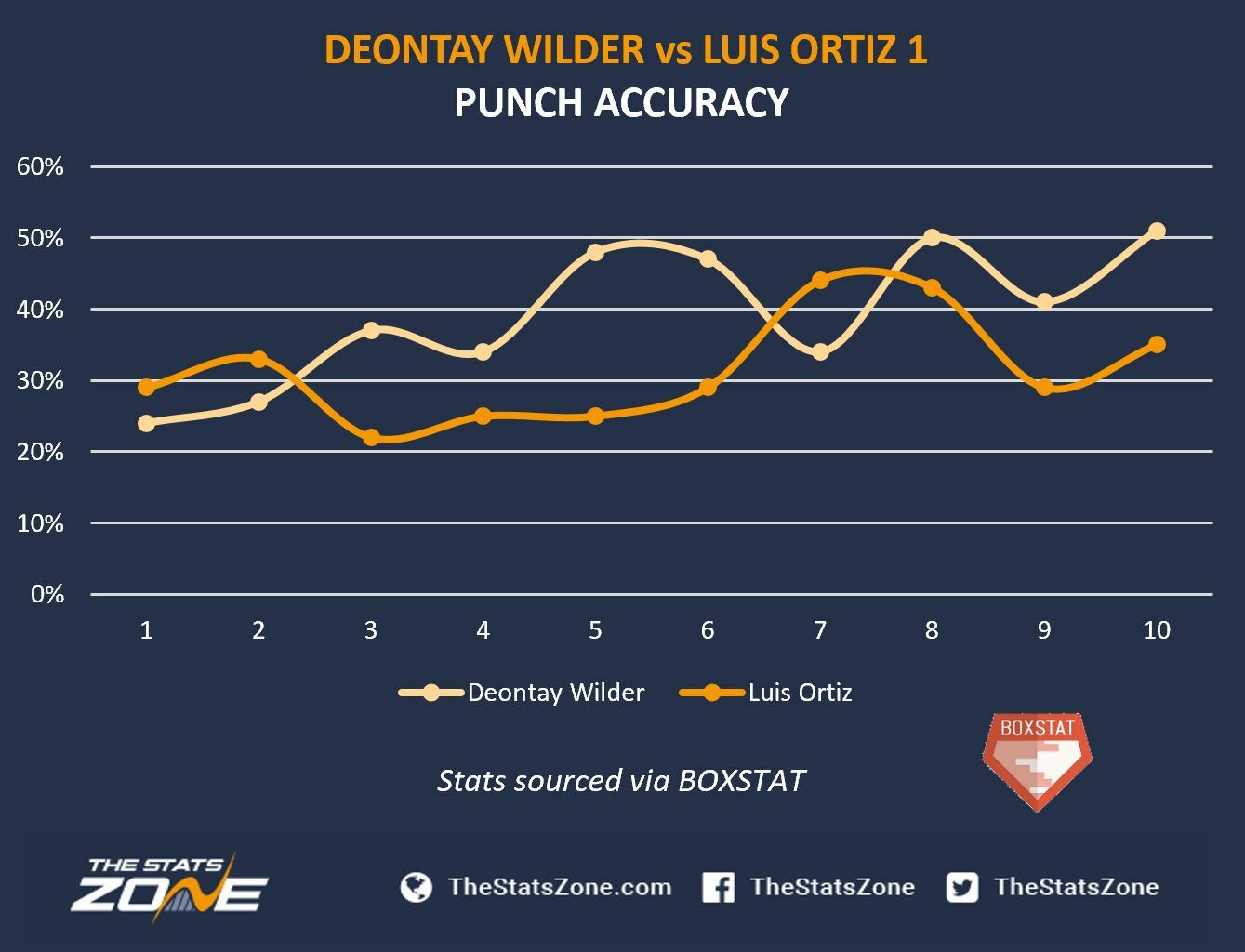 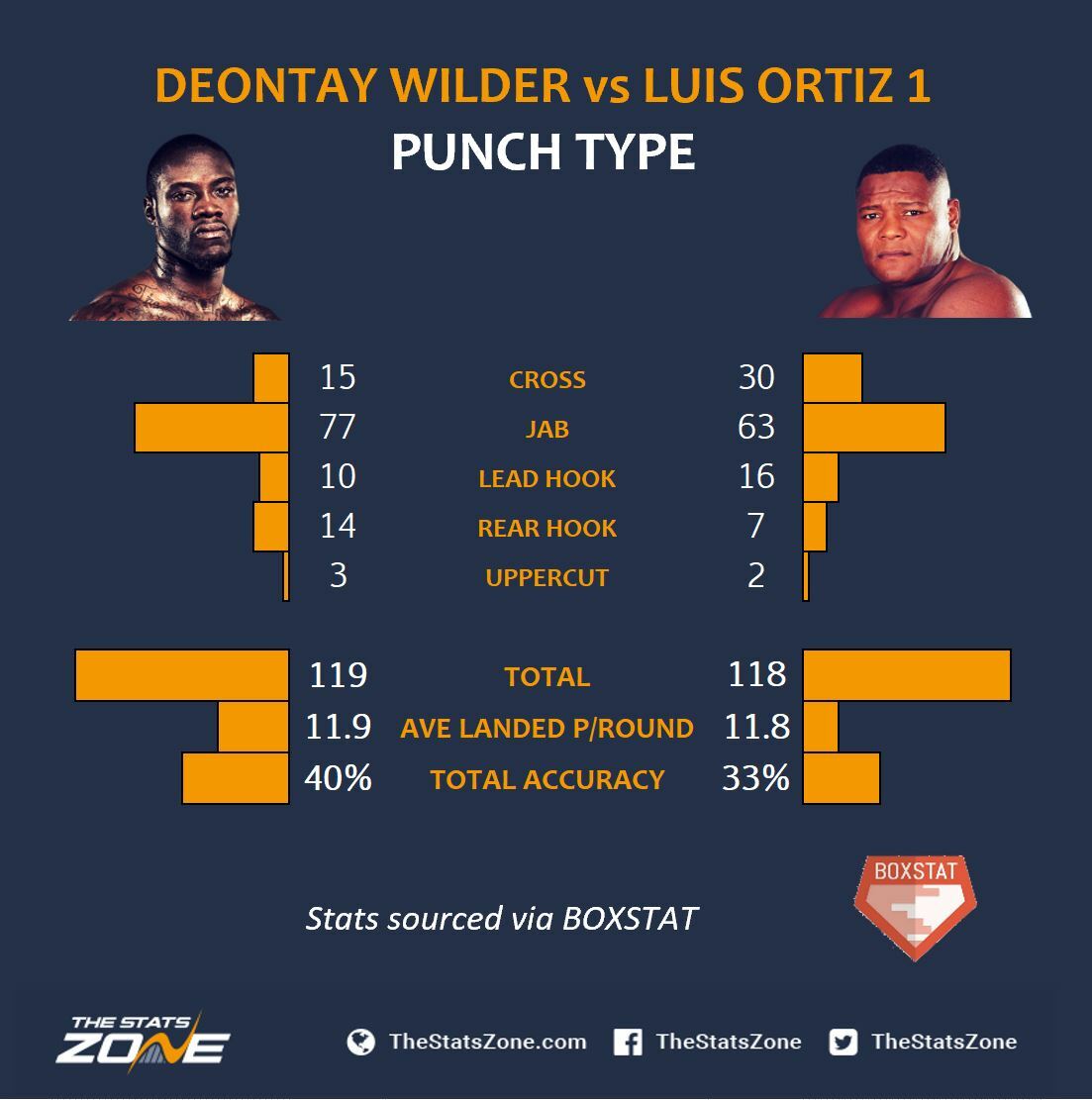 As you can see by their punch stats, the fight was very even but Wilder’s power was always the kryptonite and he dropped Ortiz late in the fifth round. In the sixth round, Ortiz brushed himself off to exchange more leather and in the seventh, he dominated the round with the bell saving the unbeaten champion from getting finished.

After this, the Cuban’s tank looked emptied and Wilder showed his champion character by pouring on the damage in the ninth and finishing Ortiz with a flurry of wild strikes in the tenth.

It was a wild and entertaining fight and a lot has happened since, so what can we expect in the rematch?

Ortiz gave Wilder problems by pressing forward and connecting with the double jab and body shots. His aggression created openings to counter and if he had better cardio, he could have finished Wilder. So, in this fight he needs to come in better condition, sharpen his defence like the first few rounds of their fight and get in the pocket to make it dirty.

However, this is likely to have the same outcome but could easily end in quicker and more devastating fashion. Their first fight was a huge learning curve for Wilder who realised he cannot get away with a rookie defence and rely on his knockout power, and even more so in his fight with Fury where a couple punches saved him from his first loss.

These fights have surely made him a better fighter, and this time he will have a strategy for the southpaw’s offence. Wilder has improved and evolved whereas Ortiz may have already given his best account and Wilder is expected to give us another violent but more efficient performance.