Winning and Losing Streaks in the top 4 European Football leagues

With the relegation of Aston Villa from the Premier League in England, one of the teams with most appearances in the division will play in the Championship next season. Their unsuccessful campaign is about to be completed with a negative record as well. Currently, the club is on an 11 match losing streak beating the record of 9 losing matches by Sunderland in 2006 over the last 13 seasons of the EPL. On the other hand, looking to a positive streak record, the incredible recovery of Juventus in Serie A this season was also remarkable for a record of 15 winning streaks, breaking the winning streaks record of 14 matches achieved by Inter Milan in 2007 during the last 13 seasons. In addition, if it was not for a draw against Bologna, the club could be on a current amazing 26 winning streak in Serie A.

The records of both Aston Villa and Juventus are not a common occurrence in a season within the top 4 European leagues. So, in order to highlight the recent numbers of these leagues, an analysis was taken for each league from 2003/2004 season to 2014/2015 season.

The 1st Tier of the English football had four champions during this period, and a maximum of 11 winning streaks achieved by Manchester United in 2008/2009 and Liverpool in 2013/2014. Nevertheless, while the second struggled to be constant in achieving more than 3 winning streaks, the first was the most frequent club on the top streaks of the league. Looking at the other three clubs which fought for the title during this period, there is a considerable number of 5 winning streaks for Arsenal and Chelsea while Manchester City has only one. Nevertheless, the three clubs have similar figures for more than 5 winning streaks.

Looking at the other side, the club with most losing streaks was Reading and Wigan with 2 streaks within the 3 longest losing streaks of the league. However, Sunderland achieved the record of 9 losing streaks in 2006. In addition, the currently Aston Villa’s weak campaign is not a surprise as the club achieved its negative record by losing 7 games in a row during last season. 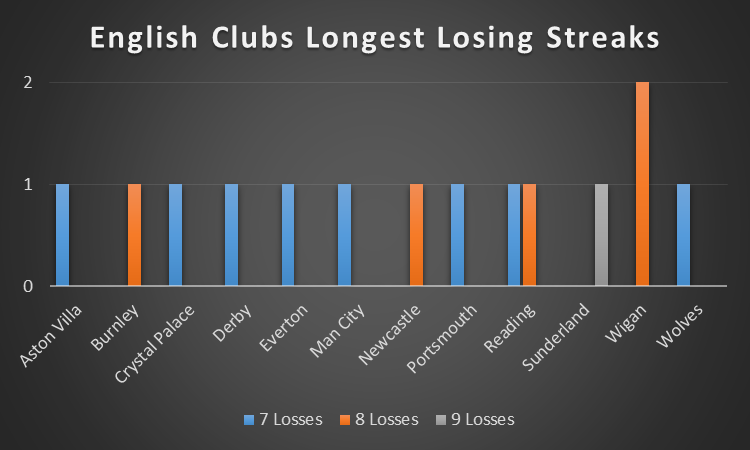 Looking at the total streaks of the league, it was more usual having two defeats in a row than two victories in a row, and the same figures are valid for 3 streaks as well. However, it was slightly more usual to have more than 4 and 5 victories in a row than 4 and 5 defeats in a row. In addition. The streaks distribution within the 1st and 2nd half of the season are almost evenly distributed, apart from the longest winning streaks, which happened more often during the second half of the season. 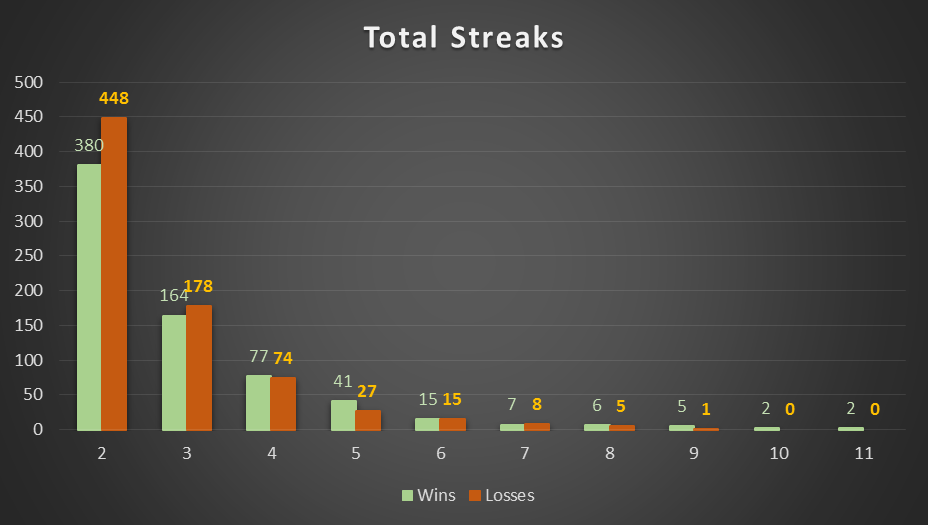 The Spanish top league is claimed to be less competitive than the EPL due to the dominance of Real Madrid and Barcelona. So, looking at their winning streaks, it can be seen that, comparing to the top English clubs, they achieved more frequently a longer winning streak, confirming the that both clubs are less competitive against other league clubs than the top English clubs. On the other side of the table, there are few clubs with greater streaks. However, these streaks last a few more games in their streaks comparing to the English clubs. 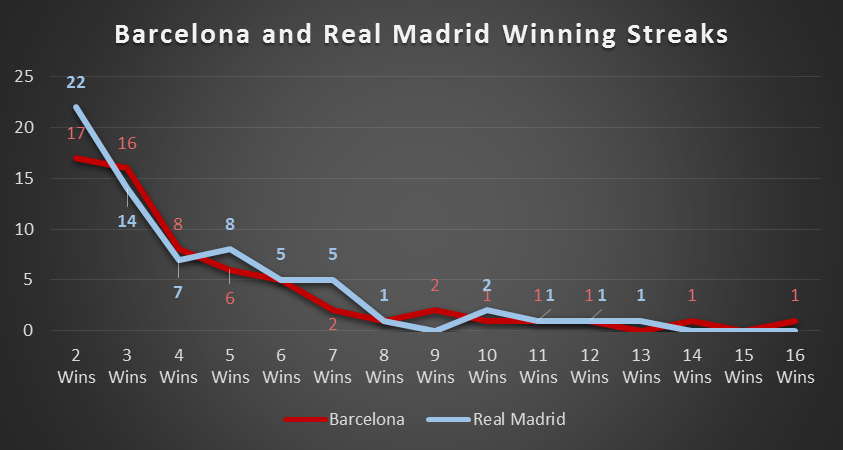 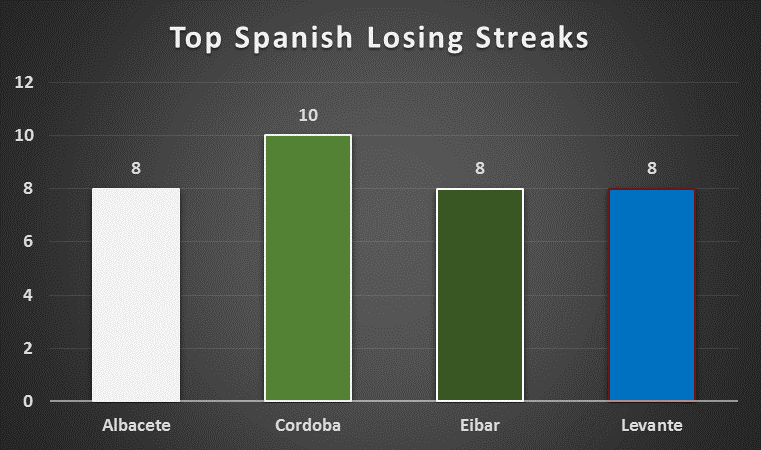 Looking at La Liga total streaks, there is also a similar pattern comparing to the EPL. However, in the Spanish league there are more losing streaks until the 4th

streak instead of the 3rd streak as the EPL had. Although, from the 5th streak until the 16th streak there are slight more winning streaks than losing streaks. Furthermore, similarly to the EPL, the streaks are evenly distributed between the two halves of the league. Nonetheless, on the contrary to the EPL, almost all of the longest streaks occurred in the first half of the season.###>###>###> 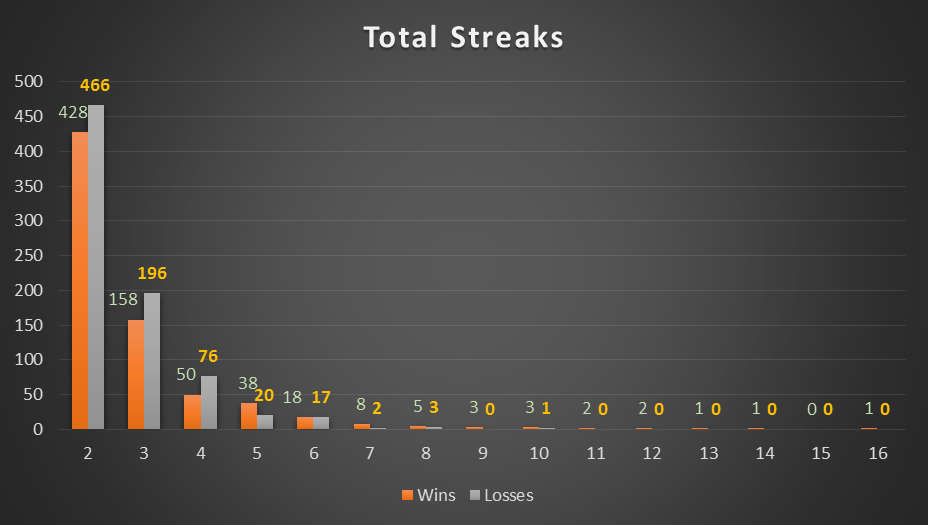 During the period of the sample, the Italian league had two distinct moments. The first was after the Calciopoli in 2006 where several clubs were banned and Inter Milan became dominant in the league by winning 5 consecutive titles. The second moment began after the outstanding Inter Milan campaign in 2010, where the club has started its decline and Juventus became the dominant club in the league by winning four titles in a row, and currently has a significant advantage to equalise Inter Milan and win its 5th

title in a row. In addition, during the sample period, AC Milan won two titles and Roma finished the league 7 times as runners-up. So, looking at their winning streaks, Inter Milan had the largest streak which was recently surpassed by Juventus. Also, while AC Milan had most streaks until their 5thgame, Roma had a considerable number of long and shorts streaks comparing to the other top clubs. On the other side of the table, there are a few clubs with a maximum of 8 losing streak (Pescara), in a similar pattern than EPL in terms of the length of the losing streak and La Liga in terms of number of clubs.###>###> 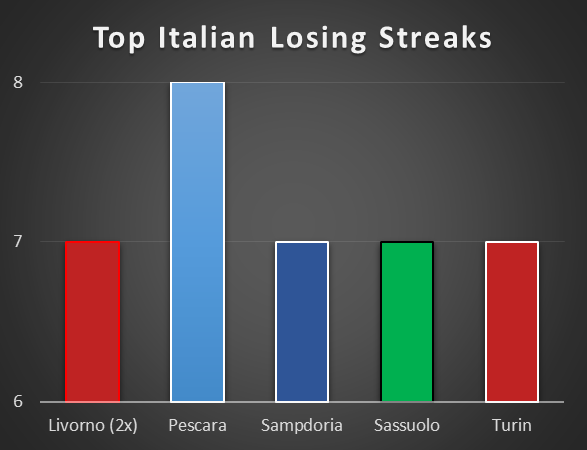 Looking at Serie A total streaks, the Italian league pattern is very similar to the Spanish pattern, the league had more losing streaks until the 4th 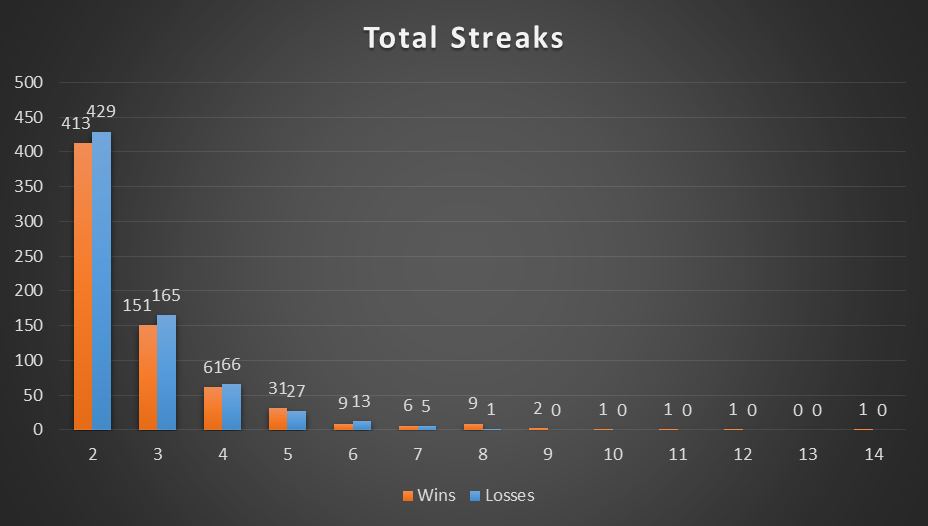 The Bundesliga is the league with most champions in the sample with five champions. However, Bayern Munich not only won the league in most of the seasons but also overcame its competitors with outstanding streaks. Looking at the winning streaks graph below with the clubs which were most frequently within the top 2 positions, Bayern Munich had the longest winning streaks within the four leagues with a 19 winning streak, and also, the club had far more considerable winning streaks than its competitors. On the other side of the table, the Bundesliga is more similar to the EPL with more clubs between 7 and 9 consecutive defeats comparing to Serie A and La Liga. Hannover 96 was the club with the longest losing streak with 9 consecutive defeats, followed by Hertha Berlin and Stuttgart with 8 each. 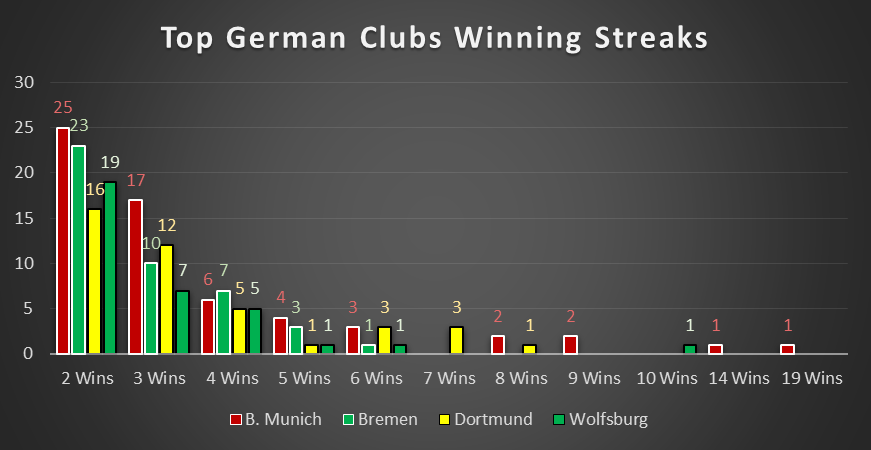 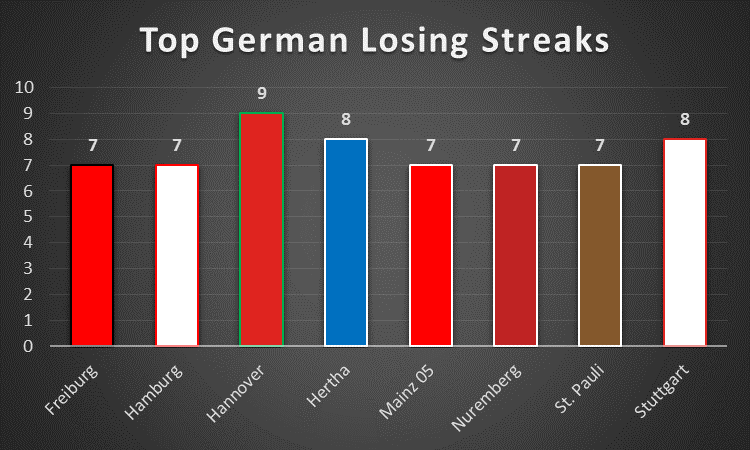 Looking at the total streaks of the league, there is also a pattern where there are more losing streaks until the 5th

game, and more winning streaks afterwards. Moreover, the amazing 14 and 19 winning streaks achieved by Bayern Munich in 2012/2013 and 2013/2014 respectively are two outliers in the German sample, showing an incredible superiority of the club amongst others in both seasons. Also, the club achieved the longest winning streak of the four leagues sample playing fewer matches than the clubs from other leagues. The Bundesliga had 34 rounds comparing to 38 for the other leagues in the sample (Apart from the 2003/2004 Serie A season which also had 34 rounds). In addition, the winning streaks occurred evenly between the two halves of the league and similarly to the Premier League, the longest streaks happened mostly in the second half of the season, as well as the losing streaks, which occurred slightly more often in the second half of the season. Indicating a slightly more balanced first half of the season in the past 12 Bundesliga seasons.###> 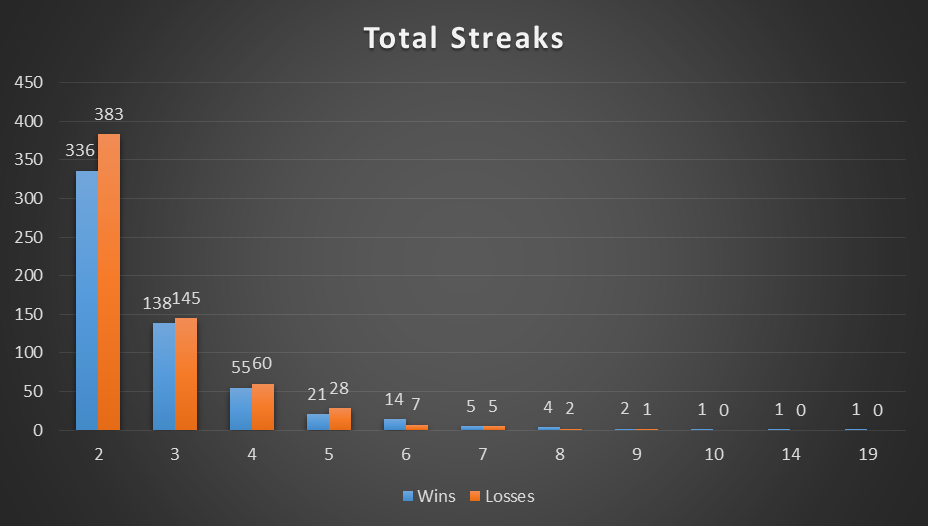 Looking at the top 4 leagues winning and losing streaks provided an overview of superiority, difficulty and balance that the top and bottom clubs had in their leagues. As a result, it can be concluded that it is more common to see more short losing streaks and more long winning streaks. Indicating that, in the top 4 leagues, the league is more balanced within weaker clubs than within stronger clubs. However, long streaks did not occur often and only a few of them could be enjoyed during a season as the two tables below demonstrate their frequency.

losing streak in comparison to other leagues. Thus, the Premier League seems to be the most balanced league within their top teams, and Serie A the less balanced with their weaker clubs. Nevertheless, on the opposite sides of both leagues, in the current season, Aston Villa are currently on 11 consecutive defeats, and Juventus overcame Inter Milan with a positive record of 15 consecutive wins, creating new records.
###>