Who Is The Best Goalscorer In European Football?

With the European Championships wrapping up last month, most players have now returned to their club teams and started to prepare for the new season. One of the most renowned players in the tournament, Cristiano Ronaldo, was prevented from scoring in the final for Portugal after a challenge from Dimitri Payet forced him to come off after just 25 minutes. When we looked at his performance in the group stages, we noticed his remarkable record – far exceeding any other player he had 30 shots (including blocks) from which he scored two goals. That is nearly twice as many shots as Gareth Bale who comes in second place with 17 shots. Ronaldo’s number is even more impressive when compared to the total number of shots by whole countries in the group stages. His score is higher than a total of 8 countries: Albania (29), Czech Republic (26), Slovakia (26), Turkey (26), Italy (25), Iceland (23), Sweden (23) and Northern Ireland (17).

As the European Championships is a short tournament with only three games in the group stages, it could be said that the sample size is small to make any significant conclusions. But what does this look like if we investigate the performance of top strikers at club level in Europe? Is there a distinct link between numbers of shots and goals?

With this in mind, TSZ has decided to explore the data around goal scoring and shots to see where the patterns lie. We want to look at identifying the players with the best goal performance in Europe. To do this, we need to first look at the simplistic measure of actual number of goals scored, but we propose that this is not enough. We also need to look at conversion rates of shots into goals, and identify if the highest scorers also have the best conversion rates.

Before we get started, there is one consideration to point out: the data includes the 2015/16 season data for the top five European football leagues (English Premier League, French Ligue 1, German Bundesliga, Italian Serie A and Spanish Primera Division). The data is limited to only include the top 10 goal scorers from each respective league, as we are looking to find out who performs best (out of the top scorers). In the instance that a player has been substituted onto the field, we have decided not to account for this appearance (starting XI and full games only). We acknowledge that this might have some impact on some of the measures but still believes that this gives a good indication of overall performance.

To get into the analysis, we will begin by looking at the number of goals scored by the top scorers in Europe for each team. This will be visualised through a bar graph and gives us a chance to see if any teams stand out with a specifically high proportion of goals scored by the top players. This leads on to the next bar graph that looks at the top 15 goal scorers and illustrates their individual scores, which enables comparison of players across different leagues. Next, we look into the common assumption that there should be a strong correlation between the number of shots taken and the amount of goals a player scores. For this we have created a scatter plot with Shots Per Game average on the x-axis and Goals Per Game average on the y-axis. This gives us an opportunity to see the players who take the most shots and also who scores the most goals to determine if there are any extreme performers. This leads to the final part of the analysis where we will confirm or reject whether the highest scoring players are also the ones with the best conversion rate (score the highest proportion of their shots). This is calculated as follows:

The graph below shows, without surprise, that Barcelona and Real Madrid score the most goals when we look at the top 10 goal scorers in each league, with an impressive 90 and 78 goals respectively. In the case of Barcelona, this adds up to 80% (90 / 112) of their total goals in Primera Division. This essentially suggests that Barcelona have a high concentration of their goals scored by a small number of players (see next graph). Paris Saint Germain (57) and Bayern Munich (50) follow the two Spanish giants in third and fourth place. This comes as no surprise as both teams dominated their respective domestic leagues and won the title several games before the end of the season. In fifth place we find Leicester City, who also won the league with a total of 40 goals from their top strikers. As a final comment, it is interesting that Napoli scored 36 goals, which is higher than Juventus at 19 goals, despite the latter winning the league. With this in mind, we will move on to investigate the top 15 goal scorers across all European leagues. 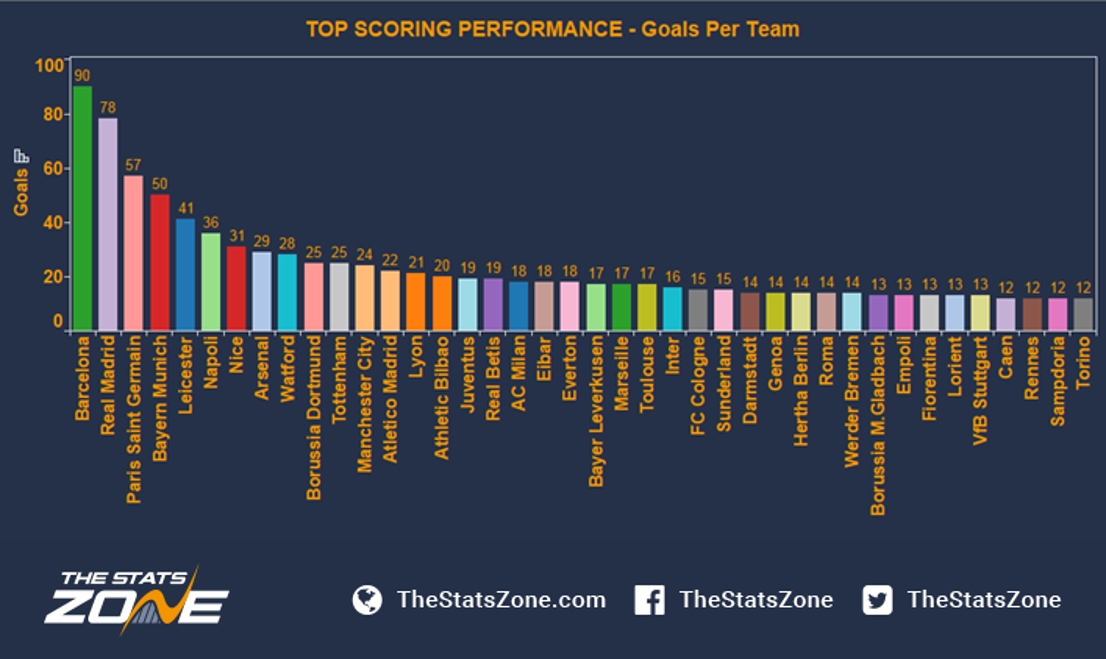 Looking at the table below, we can see that Suarez has scored an impressive 40 goals, closely followed by Ibrahimovic at 38 goals. Taking into account the previous graph, we can see that Barcelona, who had the highest proportion of goals, also has three players in the top 15, Suarez (40), Messi (26) and Neymar (24). We previously mentioned that Napoli saw more goals scored than Juventus, which is explained bellow by the impressive 36 goals from Higuain. The names that follow are all fairly obvious candidates for scoring the most goals, but who scores the highest proportion of their shots? 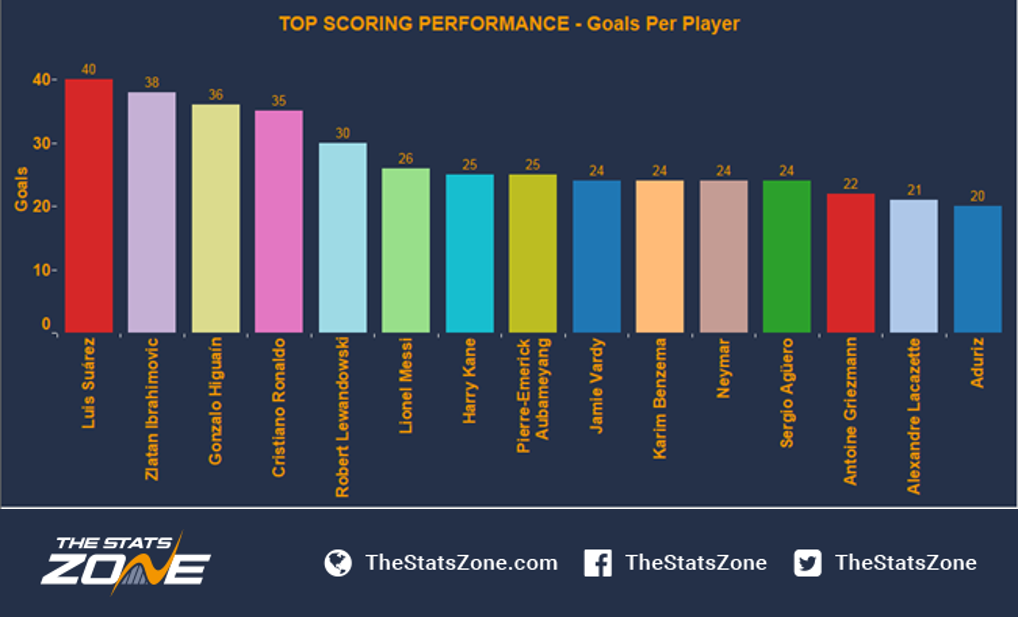 Looking at the graph below we can see that Ibrahimovic has the highest average number of goals per game at 1.3, in addition to this he also has on average shots five shots per game, which is the third highest in the field. If we refer back to the last graph which shows that Luis Suarez was the highest goal scorer (40), we can see that he scores on average 1.1 goals per game but shoots significantly less than Ibrahimovic with an average of just under four shots per game. Another interesting take is Gonzalo Higuain and Cristiano Ronaldo, scoring the third and fourth most goals respectively, also shoot the highest average of shots per game at 5.2 and 6.3. Furthermore, if we look into trend lines with 95% confidence interval (black lines), we can see that they show an upward trend. This means that there is an apparent correlation between number of shots and the number of goals a player scores. The final question from this graph is, for each player, how many shots do they need to take to score a goal? 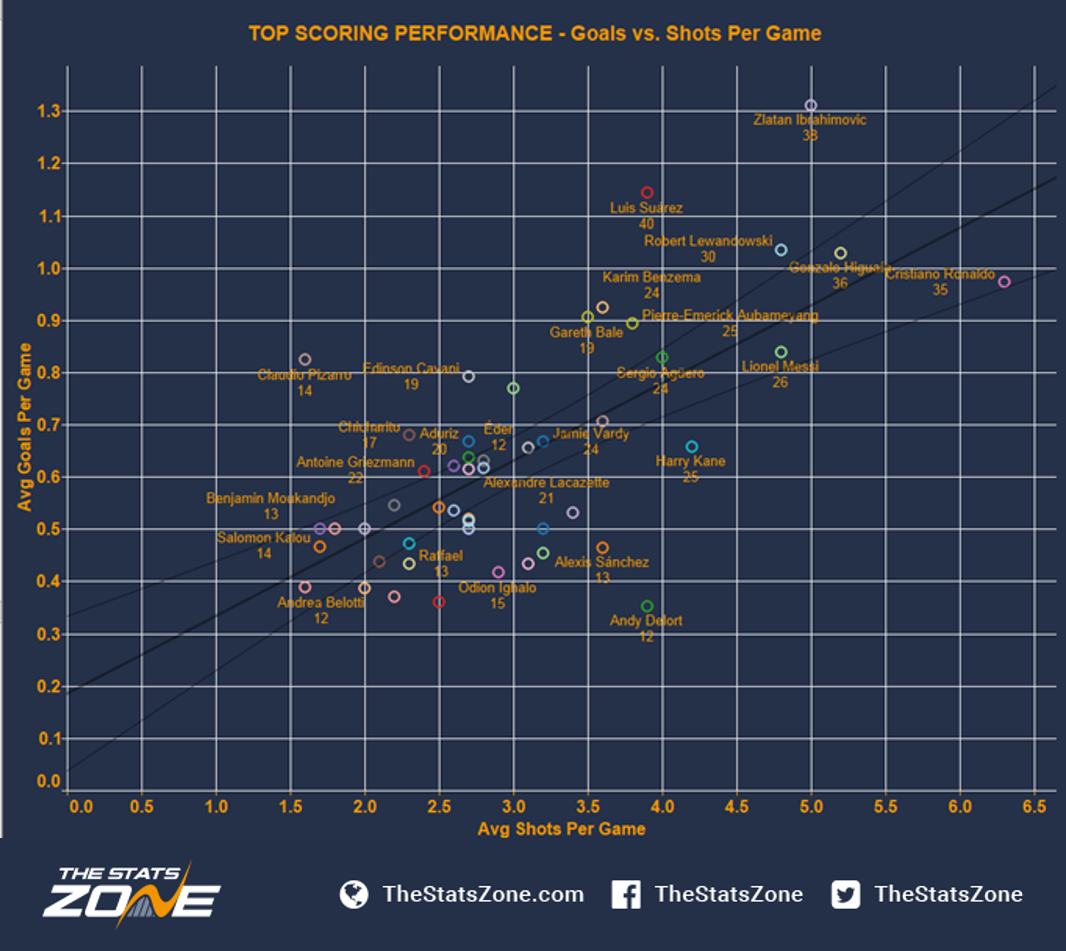 At first glance, one would assume that those in the top right hand corner (in previous graph) were the best performing, however it is important to also consider conversion rates (goals per game divided by shots per game).

Looking at the graph below we can see the conversion rate for the top 10 players in Europe. Claudio Pizarro stands out with an impressive conversion rate of 51.5% of all of his shots. However, looking into the raw data we can see that he has only started 17 games with his average number of shots per game at 1.6. Considering the fact that some players might have played almost every game in the league (ranging from 34-38), it makes it easier for Pizarro to have a good conversion rate in comparison. For example, Ronaldo takes more shots per game (and has played more games) and hence his conversion rate appears lower. Notably, Suarez sits in fifth place with a conversion rate at 29.3%. This is very impressive considering that he also shoots a significant amount of shots per game. Looking down the table, Ibrahimovic sits in eighth place with a conversation rate of 26.2%. This is specifically remarkable because despite the fact that we can see that Ibrahimovic has scored more goals per game on average, he has had to shoot more times than Suarez to achieve this score – giving him a lower conversion rate. To summarise this – we suggest that it is easier to have a good conversion rate for players who shoot less, or better put if you only shoot once you have a clear-cut benefit in this calculation. 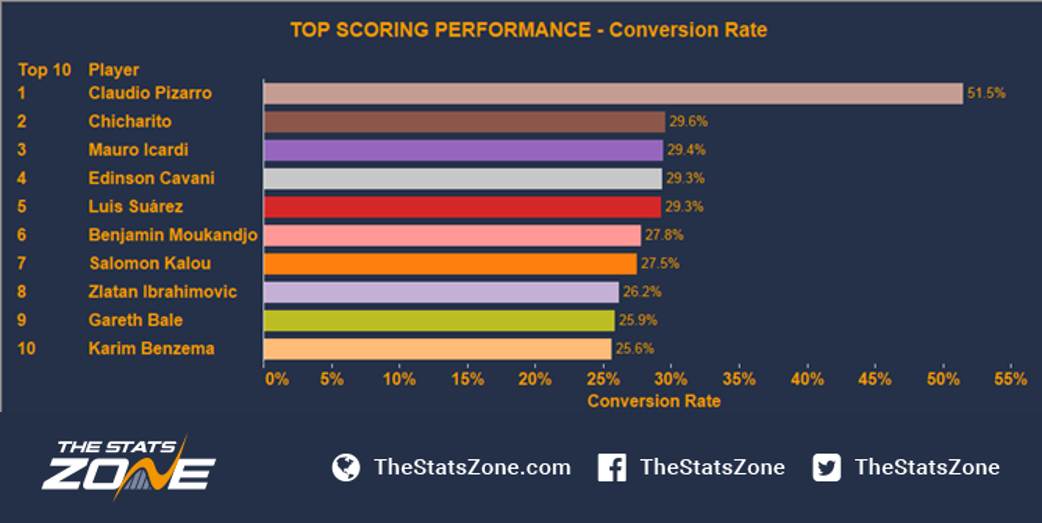 To conclude, it is clear that the top strikers from the highest performing teams score a large proportion of all goals for their clubs. A closer look at the payers showed that Barcelona had three players in the top 15 across the five European leagues investigated. One other interesting fact was Napoli – despite having a higher performing striker – lost out on the title to Juventus. As you would expect, we can see that there seems to be a strong correlation between number of shots and the actual number of goals scored. This strengthens the reports that Ronaldo’s record in the European Championship was an outlier. When we drill down and look at the conversion rate, we can see that not one of the top four players in terms of goal conversion rate, can be found in the top 15 goal scorers in Europe. This is probably down to the fact that they either have played a lower number of games, or do not shoot as much as the top scorers but when they do, it is usually when they have a clear goal scoring opportunity.