Which Leagues Are The Most Competitive in European Football

The high investments of Qatar Sports Investments in Paris Saint-Germain finally seem to have unbalanced the level of competition in Ligue 1 this season. The club has won the league with a record of 8 rounds in advance with an outstanding 9 x 0 away victory against Troyes, widening the gap between them and the second place, Monaco, to 25 points difference at that stage. Currently, after the 34th round of the season, PSG has widened the gap to 28 points and apparently, it is one of the greater points difference between the 1st and the 2nd positions in the top European national leagues in the last few years. So, in order to analyse the extent of this gap in relation to past top European national leagues, TSZ decided to compare the points difference between the 1st and 2nd, and the 1st and last position of the current top 10 European Leagues (according to the latest UEFA country coefficient) with their last 10 seasons. (Data correct from 22nd April)

The methodology applied in this analysis took into account the points achieved by clubs in the pitch, and did not consider decisions made by federations and other bodies on deducting points of clubs due to different reasons. In addition, as the leagues in the sample have a diverse number of rounds, this analysis analysed the points ratio and not the total points that a certain club achieved, to make a proportional comparison. Furthermore, in the Belgian league, not always the champion achieved the highest points ratio in the league owing to the league has a different league format, which split the league into two stages. Hence, this analysis considered the 1st place the team which achieved the highest points ratio in the sum of both phases.

In the current season, PSG has by far the greatest gap between the 1st and the 2nd place with 27.5% compared to the difference between Juventus and Napoli of 8.8%. In addition, the club is currently beating Bayern Munich record of 24.3% points ratio achieved in 2012/2013 season against Borussia Dortmund. Furthermore, this current PSG advantage is far greater than the average of 7.7% of the league, which is ranked as the 4th highest average alongside Portugal, and also almost the double of the present record in the league of 14.9% gap. 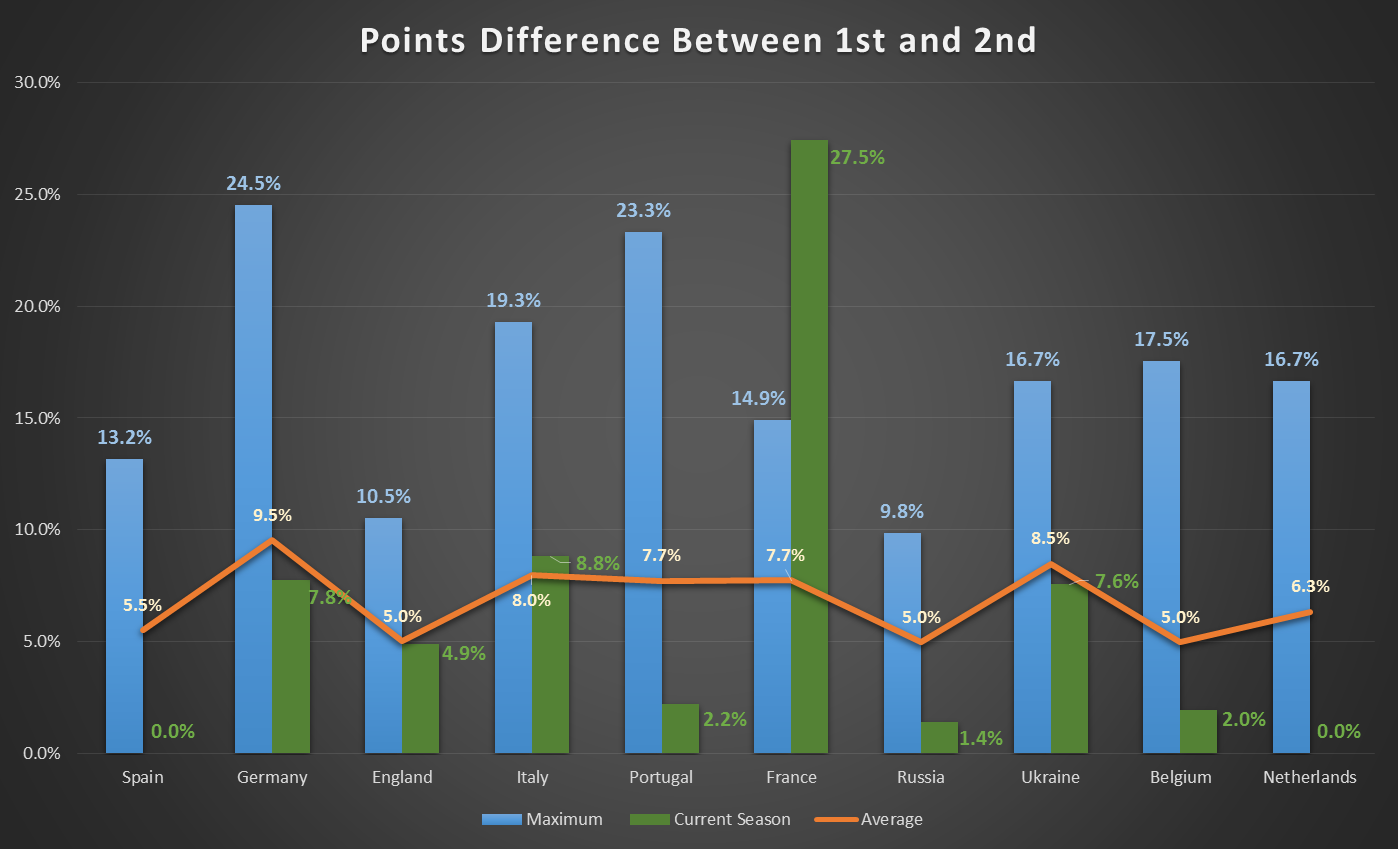 Also from the graph, it can be seen that, in terms of competitiveness between the 1st and 2nd place, Germany had the most unbalanced league in the last 10 years according to not only to their highest average of the sample of 9.5% but also due to the Bundesliga had also the highest gap of 24.5% in the sample as well. On the other hand, the Russian league was the most balanced league by having the lowest gap of 5% average alongside the Belgian and English leagues, and also the lowest maximum gap of 9.8% between the two positions. Moreover, the graph demonstrates that, in the current season, only the Italian and the French league are having the points ratio difference above their average while all the other leagues seem to be having a more balanced competition between the 1st and 2nd position in this season as their last previous 10 seasons average.
On the other hand, looking at the points ratio gap between the 1st and the last place in the last 10 seasons, France was the most balanced league in the sample with the lowest average gap of 47% and the lowest maximum gap of 57.9%. This last was curiously achieved by PSG winning campaign in 2013/2014. However, the current 67.7% points ratio gap between PSG and Troyes is being the highest ratio in the last 11 years. In addition, if this gap remains until the end of the season, the Ligue 1 will jump from the last position to the 5th position of the maximum points ratio gap rank. 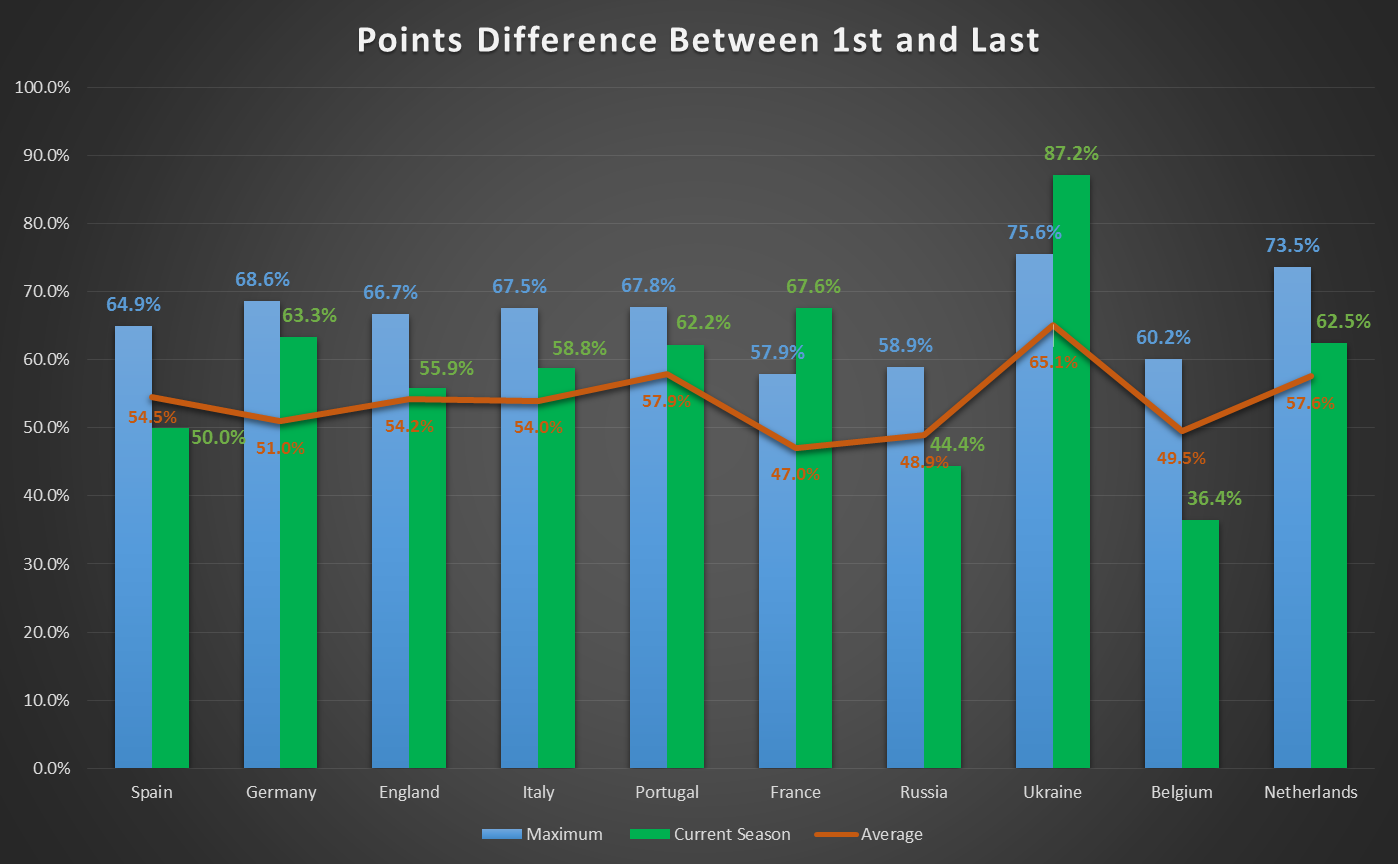 Also from the graph, the most unbalanced league in this in terms of competitiveness between the 1st and the last place is the Ukrainian league which had the highest gap of 75.6% and an average of 65.1% in the last 10 years. Also, the current Ukrainian league points ratio gap is breaking the record with a remarkable 87.2% points ratio difference between Dynamo Kiev and Metalurh Zaporizhya. In addition, alongside the French league, the Ukrainian league is currently beating the points ratio record of the last 11 years. Furthermore, the Russian, the Spanish, and the Belgian leagues are having the ratio below their average in this season, which indicates that these leagues are being more balanced compared to their sample average.