When Are English Premier League Teams Historically Out of Title Contention?

Towards the end of a sports season the term 'mathematically eliminated' is often thrown around, meaning a team has a 0% chance of accomplishing some goal. In some leagues this applies to playoff qualification, but also can be used to describe whether a team is still contending for the season title. Due to the rigorous nature of this metric though, it often doesn't come into play until the final few weeks of the league. A team in the EPL could be 20 points back in the standings with 7 games to play and still wouldn't be mathematically eliminated from the title, even though it is fairly apparent that they don't have the faintest shot at the title. So while the concept is useful, it leaves something to be desired. I wanted to craft a similar but softer principle. In other words, a standard that may not guarantee elimination, but would strongly imply it and in doing so be able to make much broader claims.

To do this, I created the idea of 'historical elimination'. A team is considered historically eliminated if they are behind in the standings by more than any eventual champion ever was at that point in the season. In other words, they would have to have a record-setting performance for the rest of the year to avoid true (mathematical) elimination at the end of the season. The rest of this article will focus solely on the case of teams competing for a single overall title, specifically in the EPL.

Obviously, this metric increases in rigor as more previous seasons are considered. If a league has existed in its current format for 50 years, it will of course have had greater potential for extreme comebacks than one that has only been around for the past decade. The continuous format is very important to this concept since changes such as the number of teams or games played will affect comparison between seasons. The EPL has had the current number of teams since the 1995/96 season, so I'll use the data from then onwards.

The biggest deficit in the standings ever overcome by an eventual champion was the 12 points that Manchester United trailed Newcastle by 25 games into the 95/96 season. United finished the season on an absolute tear, playing to a record of 11-1-1 in their last 13 games while Newcastle went 5-3-3. By our historical elimination metric, we would count out any team who trails in the standings 13 or more points. This total should be adjusted depending on how many games remain in the season, however, so let's take a look at the largest deficits eventual EPL champions have faced at all points in the season.

The farthest leftwards spike (7 points back after 3 games) is attributable to the 07/08 Manchester United squad who opened up the season and stumbled out to a 0-1-2 start before reeling off 8 wins in a row to vault back into contention. At the other extreme end (Game 32), we see a peak left by the 11/12 Manchester City team, who trailed by a whole 8 points with just 6 games to play (that, of course, led to one of the most memorable finishes in EPL history). While this graph is very interesting, it doesn't provide the best metric for historical elimination. It wouldn't make sense to consider a team eliminated if they trailed by 10 points after 21 games. After all, that 11/12 City team came back from a larger deficit even later in the season! To remedy this, let's look at the largest comebacks that have been performed at a given point or later.

This chart shows the greatest deficits that eventual champions have faced after a certain number of games played or later. In other words, a team trailing by 8 points is still considered alive as long as they've played 32 or fewer games. After that, they'd have to perform at record-setting pace to win the league, so we would view them as historically eliminated. Using this metric, let's take a look at how many teams are eliminated as the season goes on.

Due to the fact that a team facing a 12-point deficit is considered alive until about two-thirds of the way through the season, there aren't any teams eliminated within the first 4 games. After that, the pace picks up dramatically, with just over 8 teams being ruled out after only 10 games played. Half the league is done for by the 12 game mark, and by 24 games played it's usually whittled down to a 4 team race! While it should be repeated that this is a soft metric, and that a team could always have a record-breaking end to their season and defy the odds, it still provides fascinating insight into how quickly the race for the title materializes.

We can look beyond simple point deficits, however, to determine if a team is in a truly untenable position. For instance, we can look at the minimum score to win the league. This was the 96/97 Manchester United squad, who managed to win the title despite only putting up 75 points (the average champion's score is 86 in the 20-year period we're studying). While this didn't require a record-setting performance by the club itself, it does require the rest of the league to under-achieve (the 96/97 Liverpool squad had the lowest score to ever to finish runner-up and Newcastle's third-place score was the second-lowest ever). So if a team at a certain point in the season has fewer points than any eventual champion (and they aren't somehow in first place despite this), they might be considered historically eliminated. While this metric would simply not apply some seasons (such as when it's clear there is extreme parity within the league and no front-runners are ahead of the minimum score mark), in a typical season it provides an alternative take on when a team can start being counted out.

Below is the graph of the minimum scores eventual champions had at each point in the season super-imposed on the 96/97 Manchester United team' season. After that, we look at the average number of teams eliminated by falling behind this minimum score threshold. 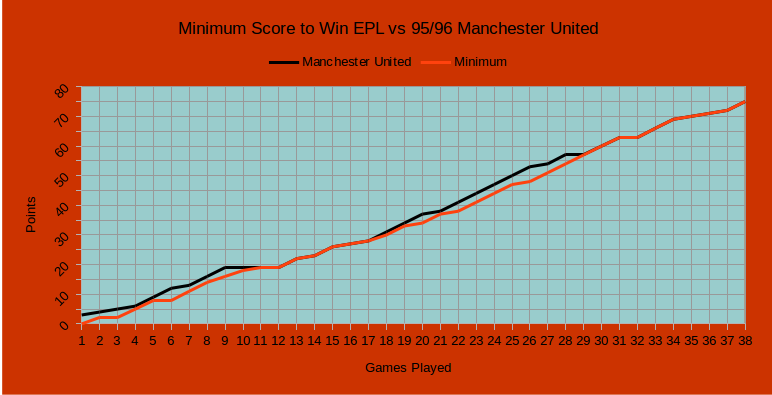 Interestingly, the second chart has a few places where the graph slopes downwards, implying that teams are somehow brought back from elimination between weeks. Obviously, this isn't highly desirable when talking about elimination, but it's not as off-putting as it might seem (see appendix material at end for a brief discussion of this). Digging into this graphic, we see that teams are initially eliminated at a very fast clip, with most of the action happening within the first 8 games. At this point, 14 out of 20 teams are considered eliminated (a number that remains rather stable besides a small dip in week 12). This is rather remarkable; barely a fifth of the way through the season, 70% of the field can almost definitely be ruled out! After this point, there aren't many dramatic changes as approximately three teams normally finish ahead of the mark set by the (relatively) mediocre United squad.

We will look at one final measurement of a team's success (or lack thereof): place in the table. While points are needed to win the title, the league boils down to not having any teams ahead in the standings. Let's take a look at the worst position that eventual champions have come back from as well as the average number of teams eliminated by this measurement during the season.

While this graph behaves similarly to the previous, it has a couple of distinct features. Namely, the two plateaus, one at about 14 teams and the other around 18 teams. There is a key point between Games 24-26 where an additional 3+ teams are eliminated. Looking at the chart above, it is apparent that this is because no team outside of the top 2 after 26 games has ever won the title. There is a slight relaxation at Games 33 and 34, due to the 13/14 Man City group that went 1-1-2 in the Game 30 to 33 stretch before reeling off 5 straight victories in a row to win the league. This demarcation at 26 games, however, is one of the strongest trends we've seen. It's quite remarkable that in the 20 years of data we're looking at, that there has never been a champion who wasn't already in the lead or runner-up barely two-thirds of the way through the season.

Finally, as a point of interest, we have the graph combining all 3 of these measurements. In other words, the average number of teams eliminated by any of these methods (deficit, minimum score, worst standing) throughout the season. 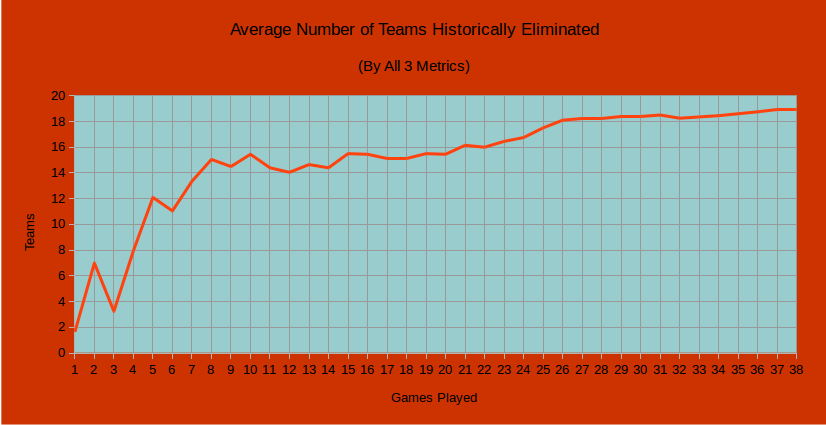 This final chart has key features that we noted in the previous graphs. Namely, the fact that there are only 6 teams left in true contention after just 8 games and that this number is winnowed down to 2 after Game 26. Another threshold of interest is the cut down to 4 remaining teams, which seems to usually occur just after the halfway point in the season.

In summary, the concept of historical elimination gives us the ability to make broad yet accurate predictions about which teams are still in contention for the EPL title. While this metric is not as rigorous as that of mathematical elimination, it can be used to make much more interesting claims. Of course this comes with the trade-off that the predictions will not guarantee 100% accuracy, but no true prediction can. Historical elimination has the advantage that claims are based off of previous data, as opposed to viewing each season as a fully unique entity. This means that we can consider any set of standings in context, which gives us deeper insight than we otherwise would have. With this technique, we can often rule out the large majority of teams from contention before even a quarter of the season has transpired. This allows us to focus on the games that really matter and the teams that realistically have a shot to win it all.