Last weekend saw a series of impressive sporting achievements. Anthony Joshua defeated American heavyweight Charles Martin to continue his flawless 16 fights, 16 knockout win streak, and the Detroit Red Wings made the NHL playoffs for an incredible 25th season in a row. But how often do streaks occur in US Sport? As discussed previously in our NHL draft analysis, the American sports aim to provide equality for all teams through methods such as a wage cap and the draft system. So are extraordinary streaks like the Detroit Red Wings a rarity, or are streaks in the major American sports a regular occurrence?

MLB
Since 2006, Major League Baseball shows that the longest playoff streak is 5 seasons. This accolade is shared by the Philadelphia Phillies (2007-2011) & St. Louis Cardinals (2011-2015). In contrast, since 2006, both the Florida Marlins and the Seattle Mariners have failed to make the playoffs at all. You have to go back to 2003 for the Marlins last playoff appearance, and 2001 for the Mariners. Although they have achieved recent success, the Houston Astros (9), Kansas City Royals (8), New York Mets (8), and Toronto Blue Jays (9), have all suffered from long unsuccessful playoff streaks. 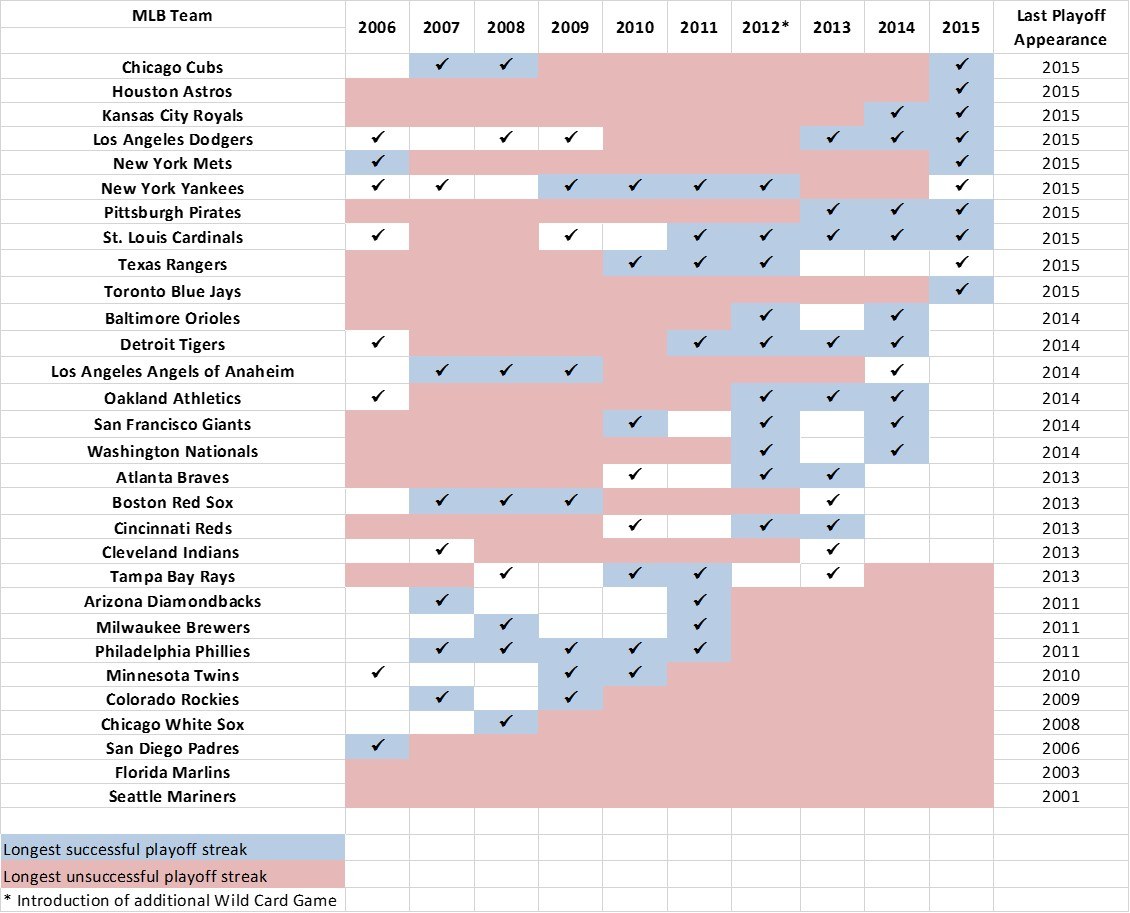 Since 2006, Major League Soccer shows that longest playoff steak is 7 seasons. This achievement is shared by the LA Galaxy (2009-2015), Real Salt Lake (2008-2014), & Seattle Sounders FC (2009-2015). The longest steak without reaching the playoffs is also 7 seasons, held by Toronto FC (2007-2014). Due to the relatively new development of the MLS, there are far less teams compared with all the other major American Sports. Therefore, there is a greater chance of a team making the playoffs. This was further enhanced in 2015 when the amount of teams that could reach the playoffs was increased to 12, out of only 20 teams. 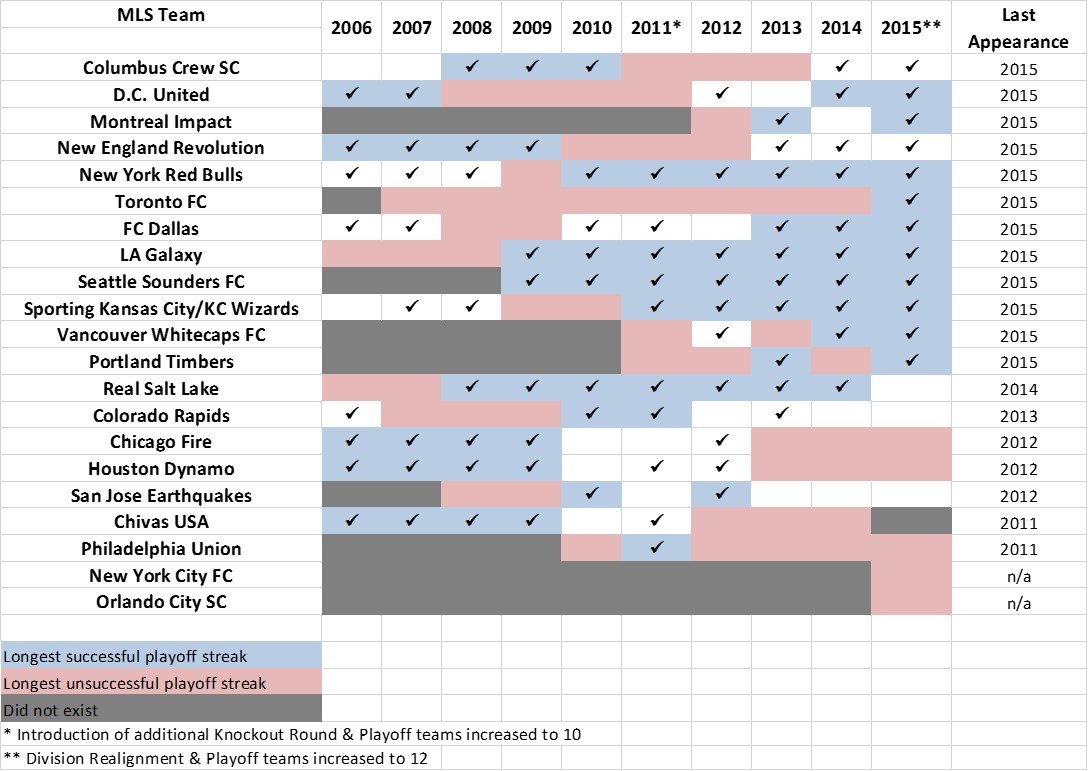 Since 2006, the National Basketball Association shows that the longest playoff streak is 10 seasons. From 2006 – 2015, the San Antonio Spurs have made every playoff. In contrast, since 2006, the Minnesota Timberwolves have failed to make a single playoff, with 2004 being their last appearance. The data also shows that NBA teams appear to have more successful streaks than the other sports; with only 7 teams out of 30 not achieving a successful playoff streak of 3 seasons or longer. 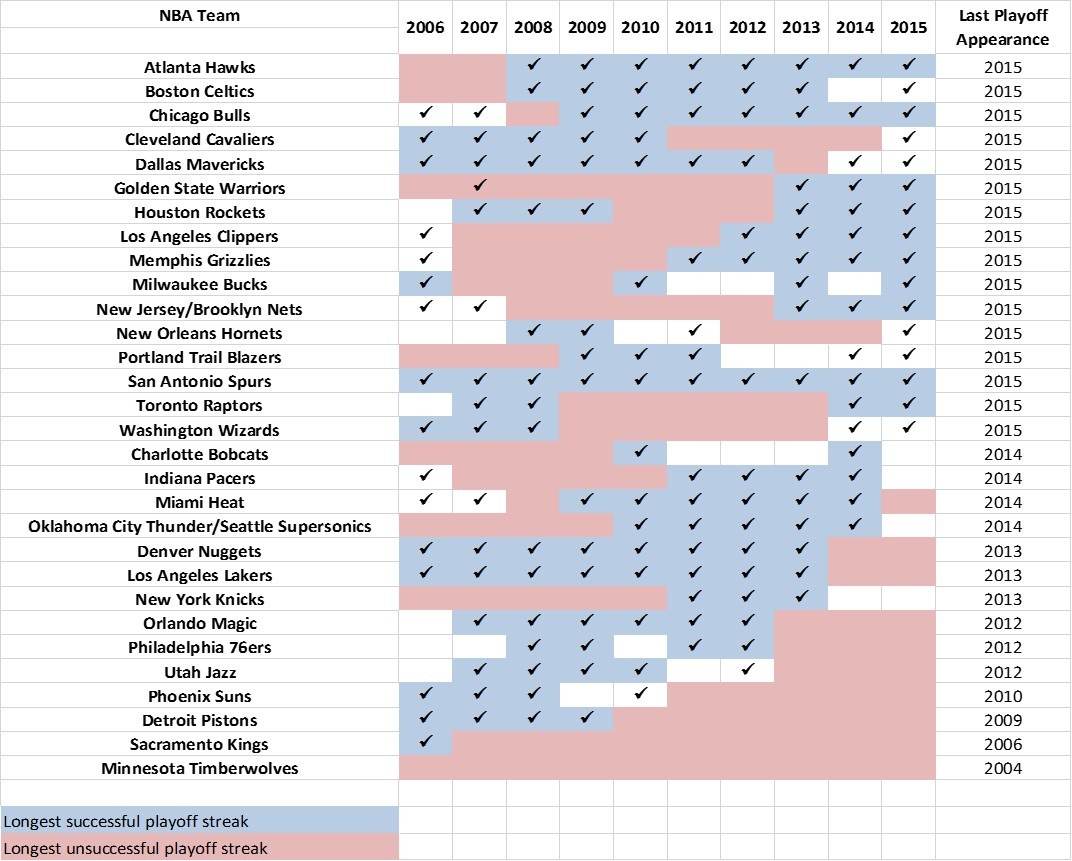 Since 2006, the National Football League shows that the longest playoff streak is 7 seasons. This accolade is shared by the Green Bay Packers (2010-2016) & New England Patriots (2010-2016). For the New England Patriots, if it wasn’t for a poor 2009 season, they would have achieved an impressive 11 season playoff streak since 2006. In contrast, since 2006, four teams have failed to make the playoffs, the largest collective number of teams across all 5 sports. The Buffalo Bills, Cleveland Browns, Oakland Raiders, & St. Louis Rams have not seen playoff action for over a decade. The worst record amongst these teams belongs to the poor Buffalo Bills whose last playoff appearance was in 1999, a staggering 16 seasons ago. 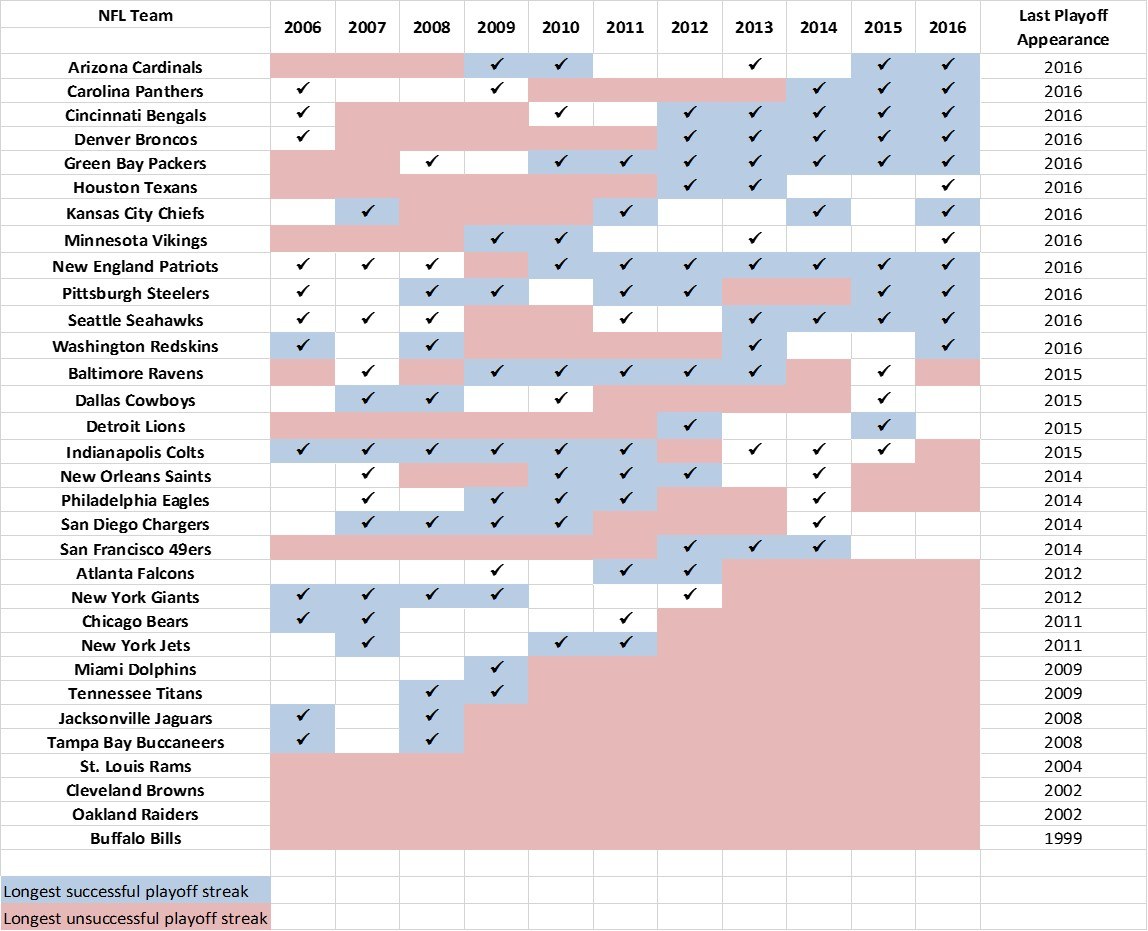 Since 2006, the National Hockey League shows that the longest playoff streak is 10 seasons. This accolade belongs to the Detroit Red Wings who have made the playoffs for 25 consecutive seasons. The longest successful playoff streak across all 5 major American sports. In contrast, since 2006, the Edmonton Oilers have achieved an ongoing 9 consecutive seasons without making the playoffs. NHL teams have the widest spread of successful seasons, with 23 teams out of 30 making the playoffs in the last 2 years. 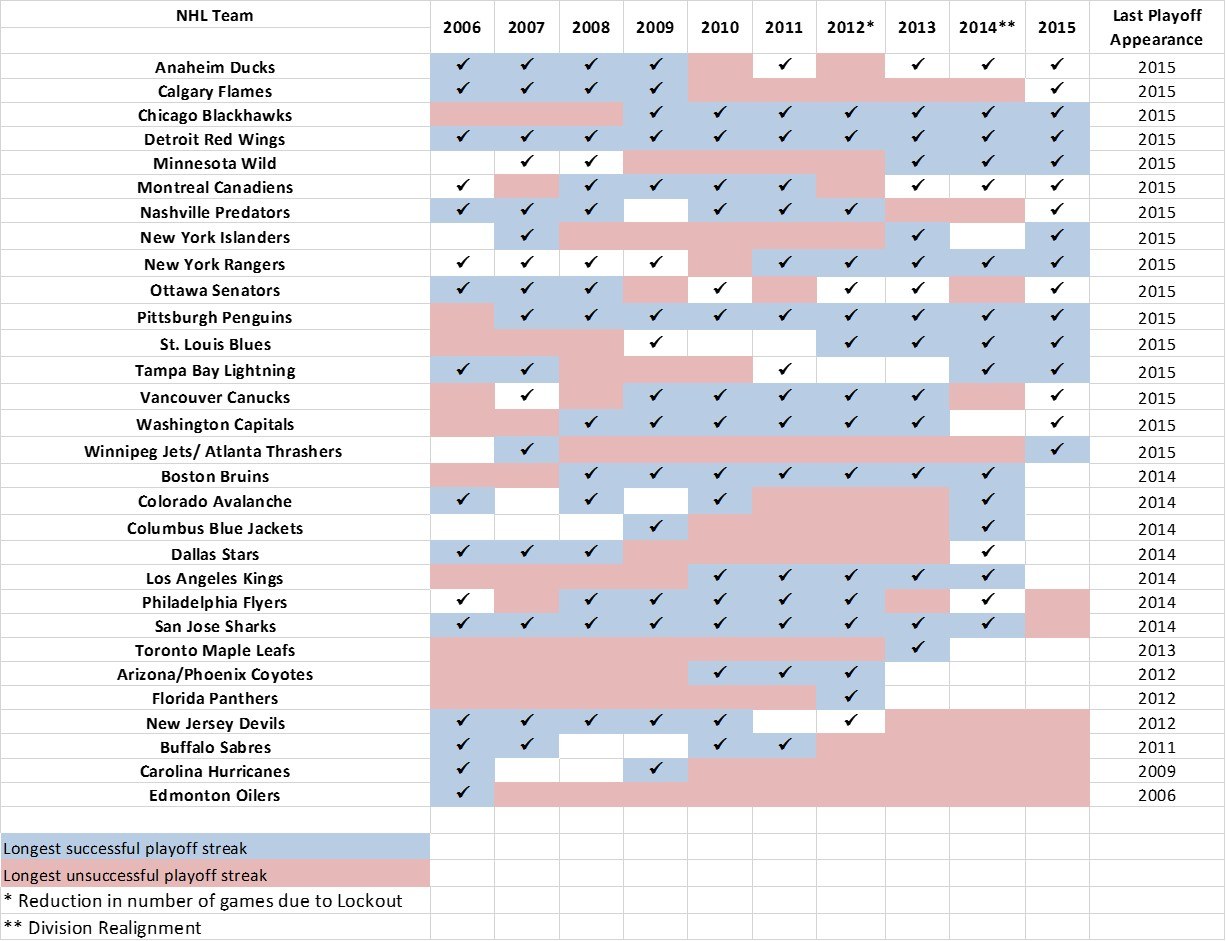 Who knows what the future will hold for these teams. How long will the Detroit Red Wings playoff streak last for? Will 2017 be the year the Buffalo Bills finally break their current unsuccessful playoff streak? Only time will tell.