UFC: How Significant Is Home Advantage?

So do fighters outside the United States have an advantage when fighting on home turf? For a fighter, there is a considerable amount of preparation required before a fight. Training camps can be as gruelling as it gets with multiple work outs a day, relentless practice of technique, skills and game plans... and then they have the dreaded weight cut. These preparations only become compounded when travelling abroad. Long-haul flights, adjusting to different time zones, unfamiliar living and training conditions, different food, different language, different routine etc are just a handful of potential hindrances to a training camp. So surely fighters have an advantage when fighting in their home country. Or do they?

We have investigated every fight outside the United States to find out what percentage of bouts were won by fighters fighting in their home country. We have broken down the win percentage by continent: 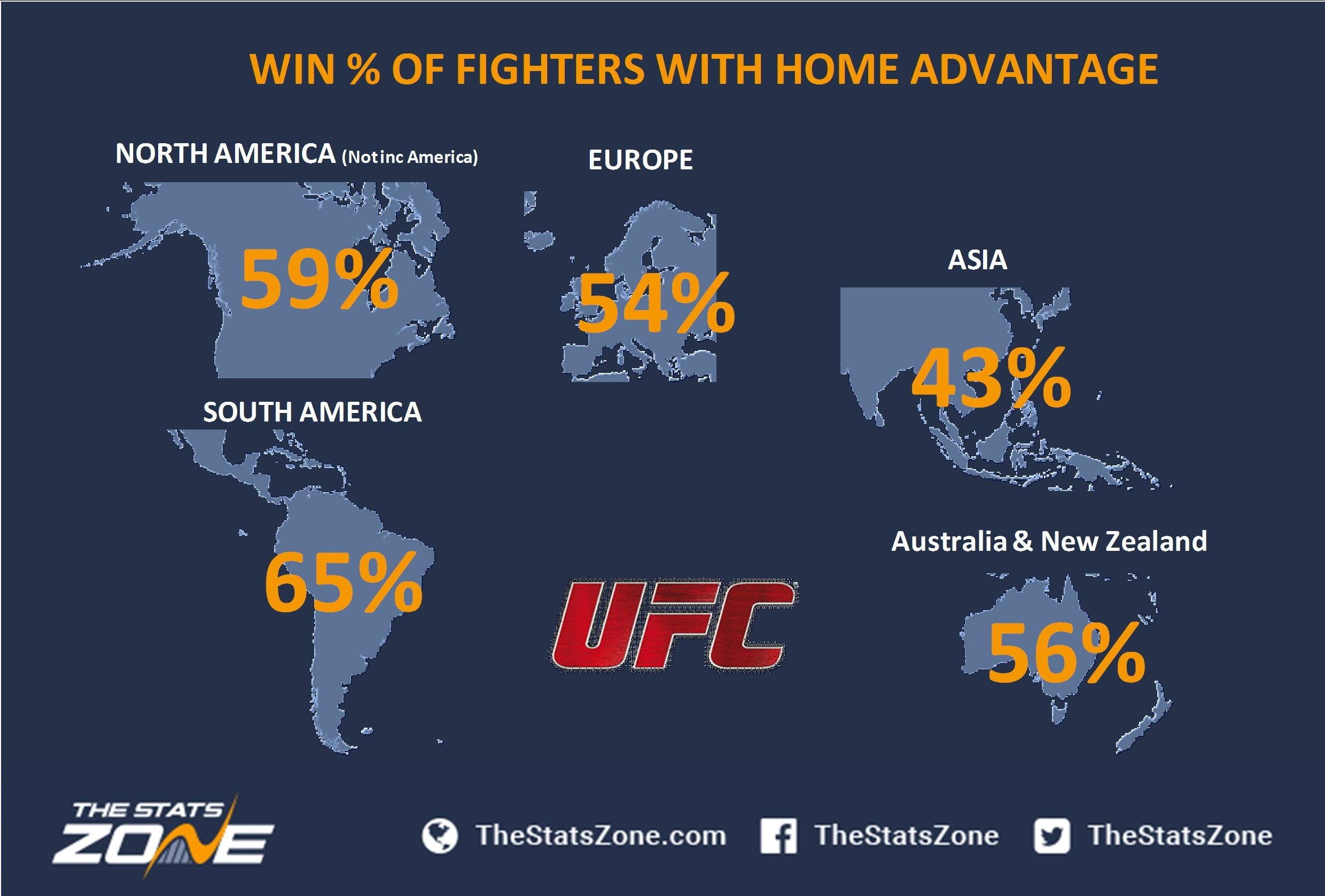 At first glance – surprisingly, there is no clear advantage. Fighters from Brazil appear to have benefitted most by fighting on home soil, winning 149 out of 229 fights; a recent example of controversy in Brazil was Englishman Darren Stewart’s bout with local fighter Francimar Barroso at UFC Fight Night 100. Stewart was originally awarded the win, but following an appeal by Barroso the outcome of the fight was changed to a No Contest. Stewart subsequently voiced his frustrations about the judges’ decision, stating that “Fighting a Brazilian in Brazil is something that every fighter should think very strongly about”.

In contrast, other continents have shown a marginal advantage with fighters from Japan, China, South Korea and the Philippines collectively, even winning less than half of their home fights (33 of their 58 bouts). So the results suggest there is little to no advantage but what about the controversial topic of judge bias? Are fighters favoured when the fight goes to a decision? Let’s look at the stats: 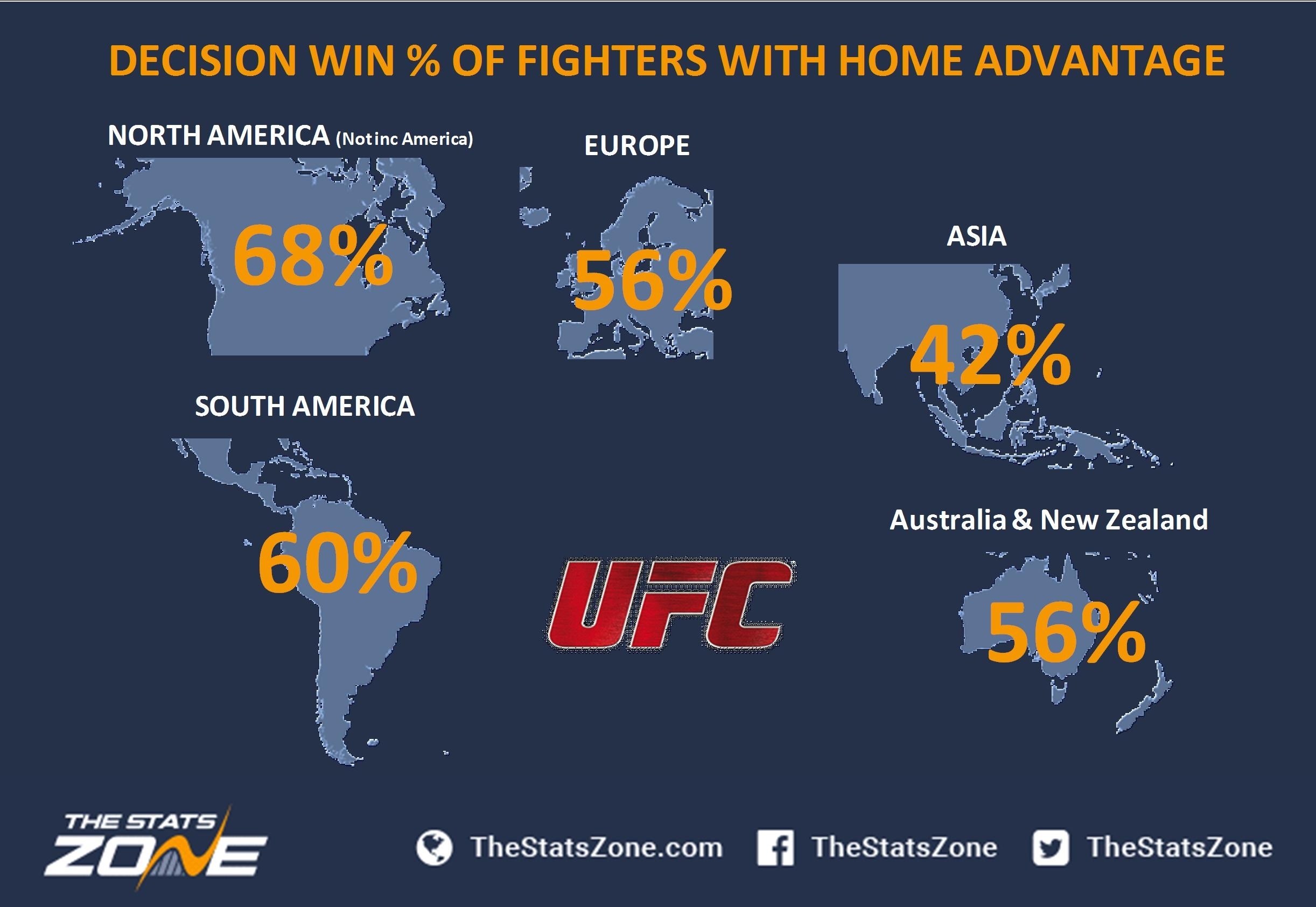 The findings are more significant here as some countries have clearly been on the right side of decisions whereas some haven’t. Canada and Mexico have been awarded a staggering 54 out of 80 decisions with Brazil earning 53 out of 89. So is it right to suggest bias? If so, it is only the case in American continents as Europe, Australia and New Zealand have a very balanced decision outcome with 56% each and Asia only winning 42% of fights that went to a decision. Judging bias is a very controversial topic and by looking at the decision win percentage of North and South America you can argue this may be the case. However, decision outcomes can be due to various factors and does not necessarily mean judges favour the home fighter. The majority of decisions are conclusive and only a handful of fights throughout the years have been close enough to cause controversy and the controversy mainly stems from the flawed judging and points system adopted from Boxing.

See below for a full country breakdown of home fights: 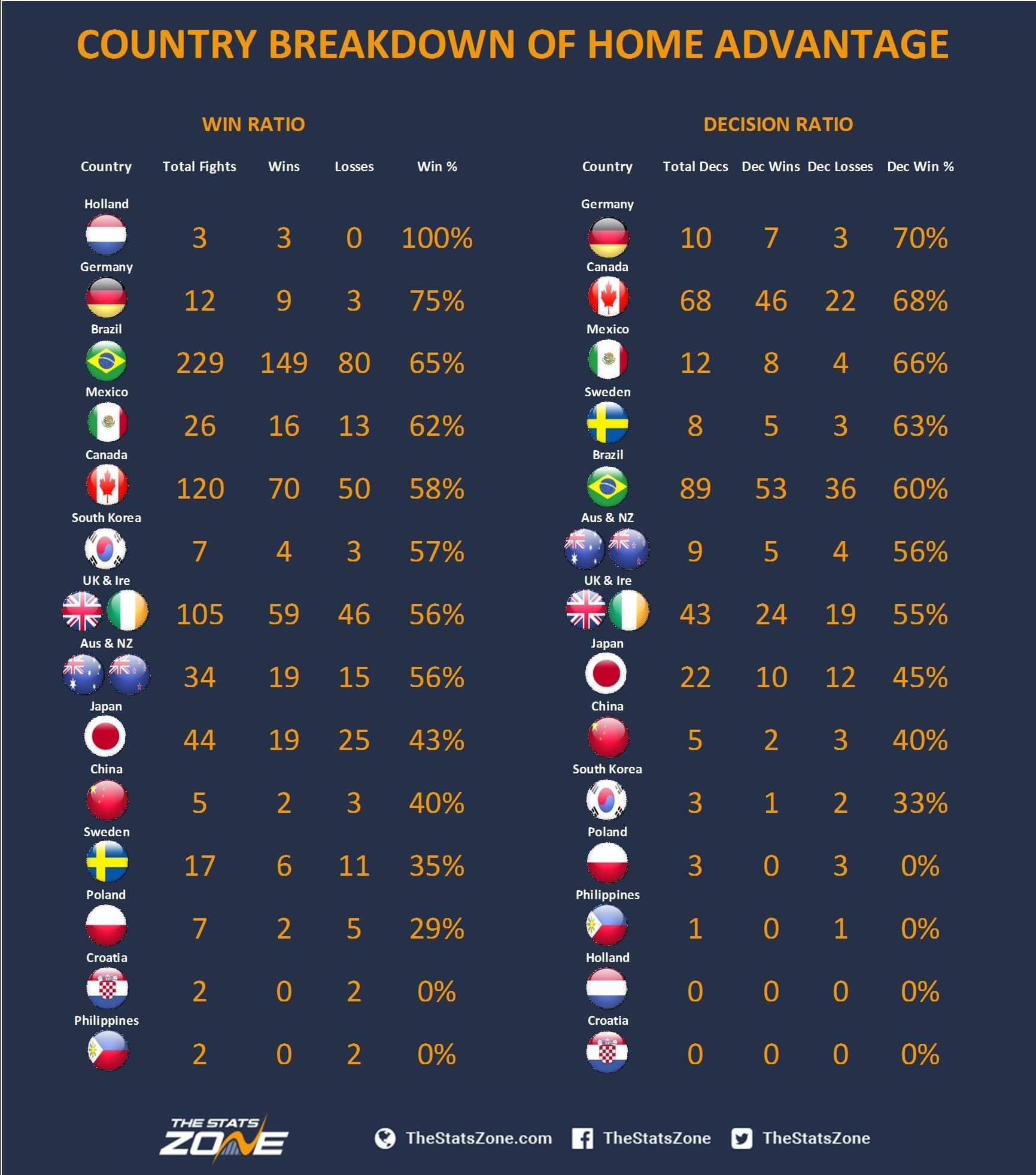 As you can see, Holland and Germany boast an even higher win percentage than Brazil, Mexico and Canada, however they have held considerably fewer fights. Holland have a perfect 100% record but only one event with three fights is simply not enough data to gain an insight into home advantage. The same can be said for Croatia and the Philippines with a 0% win percentage from two fights each. Countries that have held 40+ fights have win percentages that range from 43%-65%, suggesting there is no obvious home advantage for fighters.

As for decisions, there is a wider spectrum of findings. Germany have won a substantial 70% of decisions, however there have only been 10 fights that have gone the distance. So discounting countries that have had less than 40 decisions, the decision win percentage only ranges from 55-68% and as expected, North American countries have earned the bigger slice of pie.

Overall, the number of wins by home fighters is relatively underwhelming whereas the amount of decisions that went the way of North and South American countries is eye opening. When it comes to MMA, factors vary considerably from country to country and fighter to fighter with advantage always depending on how their opponent fairs with the foreign conditions. Ultimately, the calibre of fighters in the UFC is the highest in MMA and with this level of competition, all fights are evenly matched. The unpredictable nature of results also boils down to the fact a fight is a fight where any result is possible on the night.