Tom Brady At 40 – Is He Playing The Best Football Of His Career?

There is little doubt that Tom Brady is one of, if not the greatest quarterback ever to grace the National Football League. Love or loathe him, his record for the New England Patriots and most notably his five Superbowl rings, stand him among the best to have played the sport. The question we wanted to answer at The Stats Zone however, is whether Brady, at the age of 40, is playing the best football of his career.

To answer this, we analyse his 2017 regular season statistics compared with the rest of his career. Our analysis focuses on regular season matches only.

Last updated after the completion of the 2017 NFL regular season.

ESPN published an article discussing Brady and whether he can eventually leave football on his own terms (http://www.espn.com/espn/feature/story/_/id/21227039/can-tom-brady-leave-football-terms-tb12-method), something that very few players have ever been able to do. An initial look at the games he has played since he replaced the injured Drew Bledsoe in the second game of the 2001 season suggests that he is as durable as they come in the position.

Brady missed virtually the entire 2008 season after picking up a serious knee injury in the opening game that year, but otherwise, the only regular season matches he has missed since then were the games at the start of last season due to suspension and the infamous ‘deflategate’ saga.

There is little doubt that the emphasis on passing in the NFL has increased in recent seasons and that is reflected in Brady’s numbers. Since 2011, Brady has thrown over 600 times in four of those six seasons but 2017 saw him fall just short of that mark as he threw 581 times in the regular season.

If we take it a step further and look at the accuracy of his passing, 2017 saw him finish up with a 66.3% passing accuracy for the season – the third highest percentage in a season in his career.

His average is 62.2% for his career, but it is interesting to note that his completion percentage improved each season since 2012 up until the end of last year’s regular season. However, this season saw that run finally come to an end. Brady completed the 2017 season with an average passing accuracy of 66.3%. This was 1.1% down on 2016 (his second most accurate season of his career), although still an impressive mark.

Given his incredible accuracy and the sheer number of times he is throwing the ball, one would expect Brady to have racked up some serious passing yards over his career. That culminated in the outstanding 2011 season when he threw for 5,235 yards which is the only time TB12 has broken the 5,000 yard barrier. Only four other quarterbacks have achieved the feat (Dan Marino, Drew Brees, Peyton Manning and Matthew Stafford), but Drew Brees is the clear standout in this category having broken the tally in five separate seasons.

Unfortunately for Brady, he could not break the 5,000 yard threshold in 2017, as he hit 4,577 yards. This makes 2017 his fifth best season in terms of yards. The evolution of his career has seen him become a more accomplished passer over long distances since 2007 as prior to that, he only hit the 4,000 yard mark once in his first five full seasons.

Taking the fact he has three incomplete seasons statistically which also included incomplete matches, we have broken down his yards per game average over the course of each season to analyse it further 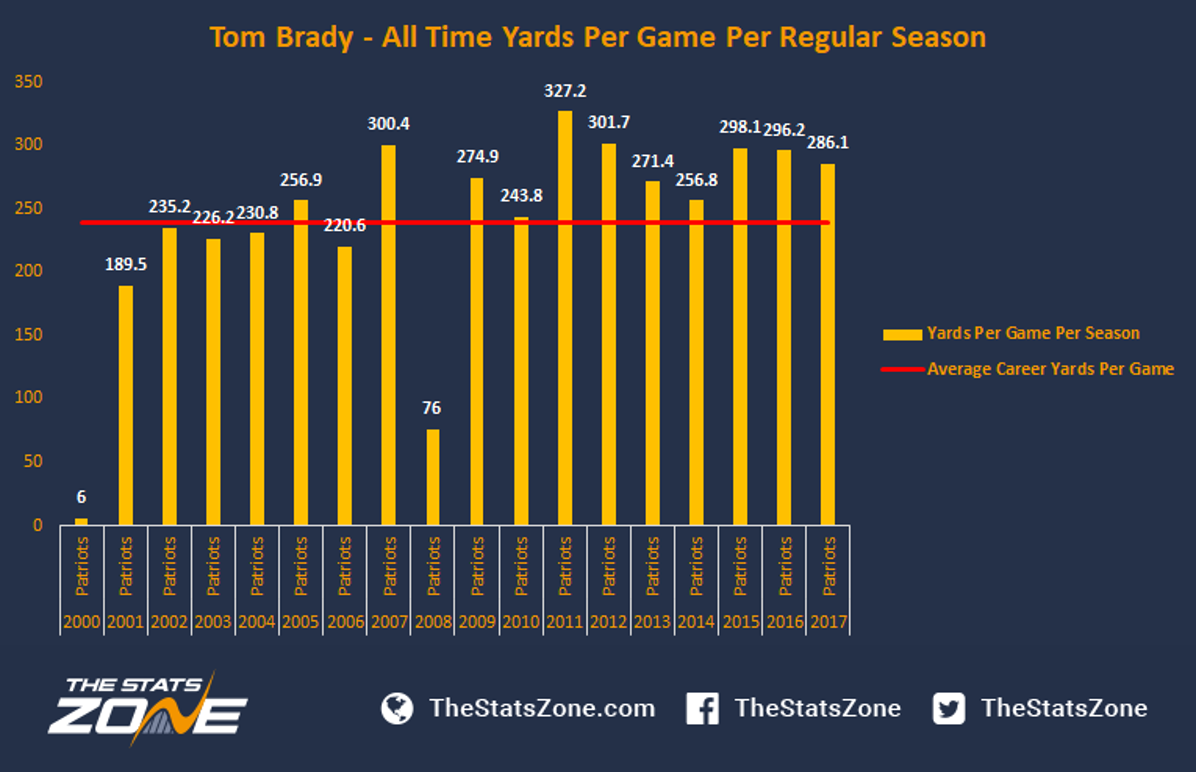 Brady is currently registered 286.1 yards per game this season. Only four times has he ever achieved an average of 300 yards or more in his 16 seasons of playing eight games or more.

The answer to that question is a resounding no. That can be attributed to the fact that Brady has never possessed Matthew Stafford or Jay Cutler-like strength in his throws. However, the consistency in his yards per attempt over the years is incredible.

After throwing an average 6.9 yards per throw in 2013, we then saw an increase in his seasonal average for the next three years. 2016 saw Brady throw an average 8.2 yards per throw but 2017 saw the trend come to a halt as this time around he managed 7.9. Having said that, the very fact he is throwing 7.9 at this stage of his career shows how his body is standing up well to the rigours of playing at the age of 40.

The 2007 season is unquestionably Brady’s greatest in many statistical measures, none more so than the stunning 50 touchdowns he threw. That was a record at the time with only Peyton Manning surpassing that in 2013 with his staggering 55 tally.

He has typically thrown for over 30 touchdowns ever since that breakthrough season in 2007, and he threw 32 in 2017 which ranked him in the middle third when compared to all his season averages.

If we include last season where he threw 28 touchdowns in just 12 matches played, Brady has thrown for over 30 touchdowns in seven of his last eight seasons.

Ball security is a fundamental part of football and there is a clear correlation between successful teams and those with a higher turnover differential. While Bill Belichick’s teams have not always been the best ball hawking defenses, their offense has certainly been heavily focused on not turning over the ball.

Arguably the biggest improvement in Brady’s play in recent seasons has been his decision making when throwing the ball, specifically in terms of not throwing interceptions. He only threw two in his 12 matches last season but threw eight in 16 regular season games this year, an average of one every other game. This season saw the same amount of interceptions as the 2007 and 2012 seasons.

Since 2010, he has only thrown 12 in a season on one occasion (2011), and it is clear to see that this has been a key factor in his form in his late thirties. Brady’s decision making ability in a split second has shown no signs of declining, which demonstrates just how sharp he remains both psychologically as well as physically.

One would expect that a quarterback who is playing at the age of 40 must have received excellent protection from his offensive line throughout his career and it is true to say that Brady has for long spells. Just how often have opposing defenses been able to get to Brady though?

While various metrics that we have already discussed have shown Brady improving in recent seasons, he has endured two of his three worst seasons in terms of being sacked. In 2013 he was sacked 40 times and in 2015 38 times. He was sacked 35 times this season.

Similarly, the fact that his body has held up to the sacks, hits and QB pressures, shows that Brady must be doing something right and is clearly one of the more durable players to have played the game.

Last but not least, we look at Brady’s quarterback passer rating historically and how his recent form measures up. You can find the explanation into the formula here (http://www.nfl.com/help/quarterbackratingformula), but in a nutshell, the calculation takes all the key measurables in match data into consideration.

2007 is once again Brady’s peak and the first time he broke the hundred mark. Last season saw his highest rating since that season with 112.2 registered.

2017 saw him end the season with a rating of 102.8 which is significantly above his overall average and thanks to this it saw him achieve a passer rating of over 100 for three consecutive seasons for the first time in his illustrious career.

There can be little doubt that Brady is playing close to his peak right now. He has certainly had seasons where he has thrown more yardage or more touchdowns, but combining all the key measurables, the level of consistency in his play both at present and for the last three to four seasons, he has been exceptional. 2017 was yet another chapter in his magnificent Hall of Fame career.