The value of the powerplay in T20 cricket

In the T20 format, the power play signifies the first six overs of the batting teams’ innings. During these six overs, the fielding team is restricted to only having two players permitted outside of the 30-yard circle. These restrictions are seen to heavily favour the batting side as there are fewer fielders protecting the boundary line. This analysis investigates the importance of the power play overs and how teams scored during the 2016 T20 world cup, from the group stage through to the thrilling final that concluded the tournament on Sunday night.

Here are some of the key power play and batting stats coming from the tournament.

- The average score during power play overs for winning teams was 47 (7.9 RPO). 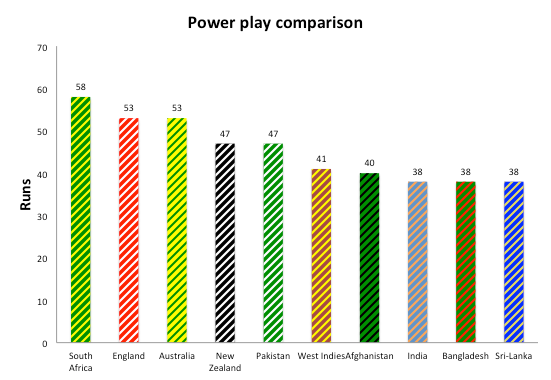 - Two of the three top ranked power play teams (South Africa and Australia), did not progress past the group stage of the tournament.

- The West Indies love to chase! The champions did not bat first once during the tournament, losing only one match in shock loss to the up and coming Afghanistan.

- New Zealand batted first in all their games and also lost just the one match but unfortunately for them, it was in a knockout final against India. 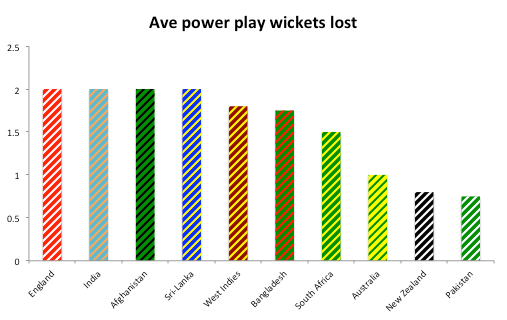 - There was no obvious relationship seen between losing wickets in the power play and tournament success, with some of the most successful teams (England, India and the West Indies) losing more wickets on average during the power play when compared to teams unable to qualify for the knock-out stage. 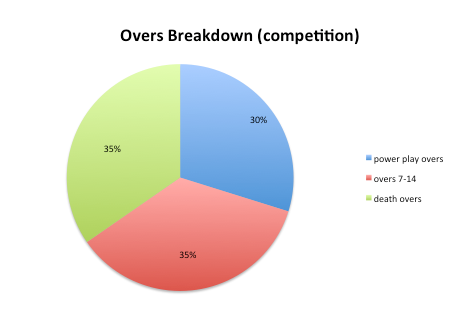 - Overall, runs scored in the death overs had the same contribution to the total score even though the middle overs consist of an extra two overs. 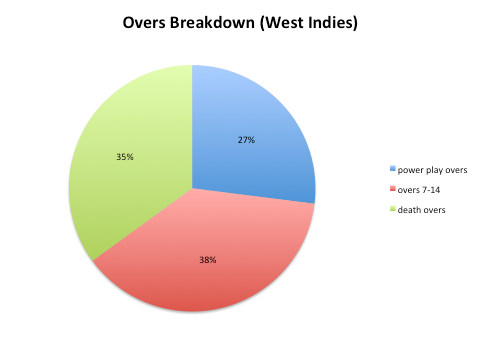 - Slow starters? The Windies contribution of runs during the power play overs was 3% less than the rest of the competition.

- Fast finishers! The West Indies made up for their power play deficit during the death overs with 3% more runs being scored between overs 15 and 20.

- Thanks to Carlos Brathwaite, the West Indies belted 24 runs off just 4 balls in the final over alone, which contributed to a whopping 15% of their total score!

With the conclusion of the tournament, it was seen that the power play did not seem to benefit batting teams as first anticipated. The power play is now seen to be high-risk vs. reward. On one hand the fielding restrictions make it appear easier to score more freely with only two fielders protecting the boundary. However teams are also seen to be reluctant to play their shots due to the fear of losing early wickets.

As was seen in this tournament, scoring in the power play was not as extreme as was thought before the tournament started. Looking at the group stage and beyond, teams batting first surpassed fifty on just nine occasions. When teams batting first were able to score above fifty during the PP overs, the team chasing was also able to surpass fifty more than half the time (55%). This could be due to the inability of teams batting first being able to predict what a par score is, therefore attempt to retain wickets until the latter overs and in comparison, teams chasing knowing what the target is and being able to focus more on run rate.

With teams seemingly not willing to give up early wickets, more emphasis has been placed on big hitting during the latter overs of the match (take the West Indies whopping 57 off the last five overs in the final as a perfect example!). An interesting tactic that will surely evolve.