The Master of the Sack - Comparing NFL Players Across Eras

With the NFL draft coming up, the value of various positions is in constant discussion. Quarterbacks and offensive line are considered necessary to succeed, but punters and kickers are often viewed as interchangeable. If there's one category of positions that's enjoyed a popularity boom in recent years, it's that of the pass-rusher. Elite defensive ends JJ Watt and Ndamokung Suh both landed massive contracts recently, being joined this off-season by some lesser-known names such as Malik Jackson and Olivier Vernon. If a player can get to the quarterback, they are going to be earning some serious money. You can bet that a lot of teams will be looking to find their next star defensive lineman or linebacker in Chicago, whether its Myles Jack, Joey Bosa, or Deforest Buckner.

What's the source of this popularity boom? Are the players in the league today some of the best pass-rushers ever? Comparing NFL players across different eras is always an interesting proposition. We'll do that here for pass-rushers, specifically by looking at the sack output of some of the greatest of all time. To do this we have to recognize that sack rates have varied throughout the years. Here's how the sack rate has varied from 1980 to 2015. 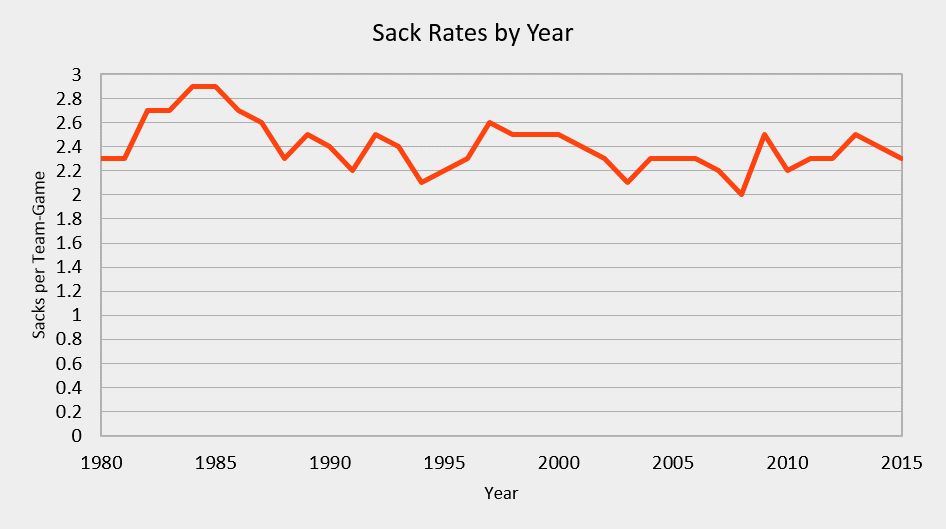 So we can see that players in the mid-80s were in a much better environment than those in the early 2000s or even the most recent season. So how do we compare different generations of players? A simple and intuitive solution is to adjust a player's sacks based on the year they were obtained. For example, the sack rate in 1980 was the same as in 2015 (2.3/team-game), but it skyrocketed to 2.9 in 1984. This means that we would view a sack from 1984 as having a value roughly 2.3/2.9 ≈ .79 sacks in the 2015 season. Using this, we can adjust all players’ totals to their equivalents during last season (2015).

The next question we face is what career portion to compare between players. Their entire time in the league? Their prime? We decided to look at three different time spans for each player: their best 3-year streak, their best 5 overall years, and their career average. That way we can look at who had the most dominant stretch, who had the most great years, and who had the most consistently amazing career. Let's start with the best streaks. 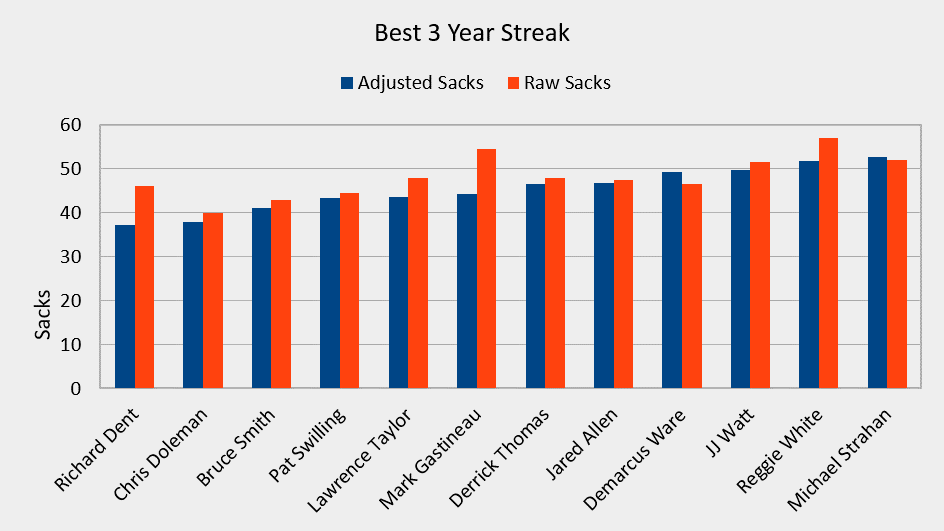 So Michael Strahan has the best 3-year streak after adjustment, bumping out Reggie White for the top spot over all. This is largely because White played in the sack-happy mid/late-80s while Strahan's dominance came in the early 2000s, when sacks were much scarcer. JJ Watt's 2012-2014 streak is revealed to be historically great, reaching third all-time on our list. This is at the expense of two players who are hurt by the adjustment, Mark Gastineau and Richard Dent. These players both played in the mid-80s, where sacks came at a rate about 125% nowadays. Next we look at the best 5 overall years for each player. 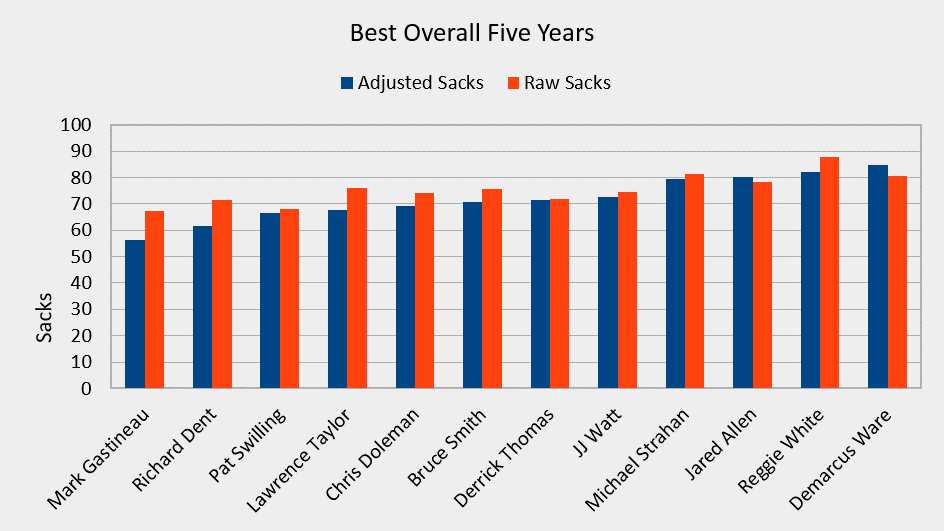 Again, we see Watt, Strahan, and White in the top 5. Two of the spots, however, including the best overall are taken by modern-day players. Demarcus Ware comes out on top, despite having only the third highest unadjusted total. He produced during the mid-to-late 2000s, a period where sacks were almost at an all-time low. Jared Allen manages to edge out Michael Strahan for the same reason. It should be noted that Watt's fifth place is remarkable as his career has only been five seasons long! This means his best five years include his rookie season where he only recorded 5.5 sacks (2011, which had the same sack rate as 2015). Assuming Watt manages to stay healthy, his 2016 season is practically guaranteed to significantly increase his best total. Finally, we wrap up with looking at career averages for each player. 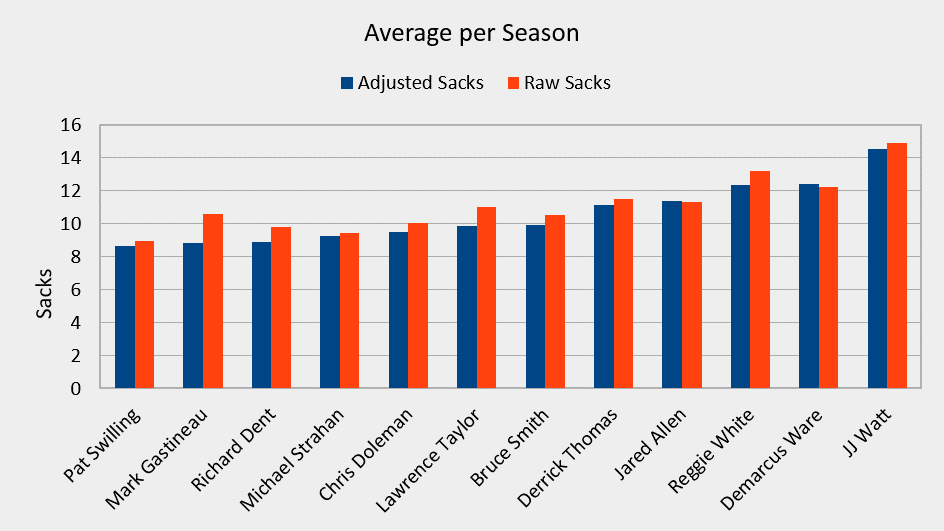 On the surface Watt and Ware seem to have the two most consistent careers of all time, but they're also the only ones on this list who are still in the league today. Players almost always tail off at the end of their career so it may not be reasonable to include them in this analysis. If we narrow our view to the retirees, we see that Reggie White comes out on top with Jared Allen and Derrick Thomas rounding out the top 3.

So there we have it. Strahan has the best streak of all time, Ware has the greatest top five seasons, and White has the most consistent career (among retired players).