The Impact Of High Altitude In Football

The impact of playing football at high altitude has been a hot topic in discussions around World Cup qualifiers, notably so when it comes to South America; Lionel Messi and Angel Di Maria complained about altitude effects when travelling to Bolivia for the Brazil 2014 World Cup qualifier. The game was held at Estadio Hernando Siles in La Paz, a stadium located roughly 3,500m above sea level. FIFA was also on the case back in 2007 when they investigated the effect of altitude, citing a concern for players’ health, and suggested that it gave the home team an even greater home advantage. This resulted in a ban on international fixtures played at an altitude at >=2,500m (8,200 ft) above sea level. The ban was enforced for a short period and was rescinded in May 2008, but notably it prevented Bolivia, Colombia and Ecuador from hosting World Cup qualifying fixtures in their capital cities. Besides World Cup qualification, it’s a common occurrence that club teams in South America are forced to travel and play at a high altitude when they participate in Copa Libertadores. This article seeks to understand what impact playing at altitude has on results and proportion of goals scored in Conmebol (World Cup) qualifiers and Copa Libertadores.

There are two key considerations in this analysis. Firstly, there is a significant difference in the playing format between Conmebol and Copa Libertadores. The first is an international competition between countries and the latter is a club competition - essentially the South American equivalent of the European Champions League. Therefore, the study must consider variant lengths of data sets. For Conmebol it includes qualifying fixtures for the 2006 and 2018 World Cup, including all games played up until 30/03/2016. For Copa Libertadores, it reflects fixtures between 2013 and 2016, not inclusive of games played after 15/04/2016.

Secondly, the study will look at proportion of home wins, draws and away wins, splitting teams by high and low altitude. High altitude games have been defined as all teams playing their home games at >=2,500m above sea level and consist of 2 teams in Conmebol (Bolivia and Ecuador) and 9 teams in Copa Libertadores (The Strongest, Club Bolivar, Club Universitario, San Jose, LDU Quito, Independiente del Valle, Deportivo Quito, Santa Fe and Millonarios FC). All other teams participating in these competitions are considered low altitude.

The comparative results between high and low altitude teams will be illustrated through stacked bar graphs (plot 1 to 3) to facilitate comparison of the competitions and the teams that participate. This study will also explore the proportion of goals that are scored in the second half (vs. total goals) plotted in bar graphs (plot 4) as this would be where we would expect the point of difference to manifest. 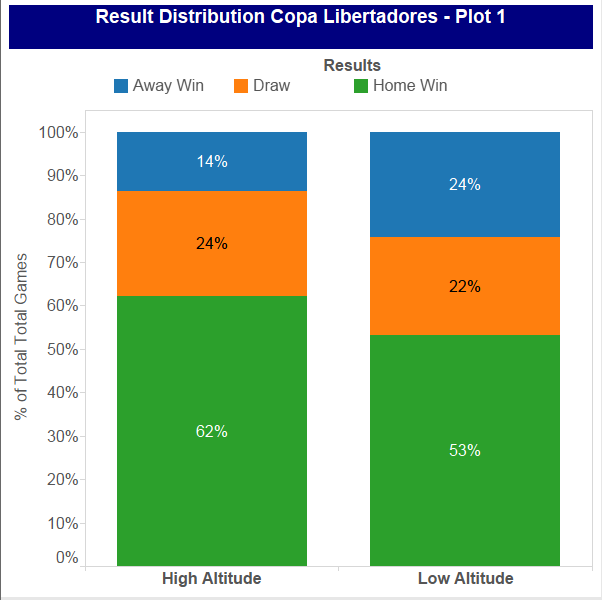 The second plot follows the same structure, but looks at Conmebol qualifiers. Comparing the two stacked bar graphs in this plot, we can see that the difference in performance between high and low altitude teams is barely distinguishable. Here high altitude teams only achieve a slightly higher home win percentage at 55% versus low altitude teams at 54%. This suggests that there is no difference in performance level for international fixtures at high altitude. At first glance this contradicts the hypothesis of the study, but a further look into the raw data highlighted two factors which explain this peculiar finding. Both factors are related to the detail that there are only two teams in the World Cup qualifying fixtures in South America who constitute the high altitude statistics (Ecuador and Bolivia). Firstly, looking at each respective squad for the last few fixtures, we can see that a number of players in the starting XI usually train on home grounds at lower altitude. Therefore, one likely influence which would explain the unusual results on the plot is that these players would find it difficult to play high altitude fixtures; hence some of the aforementioned advantage would be removed. 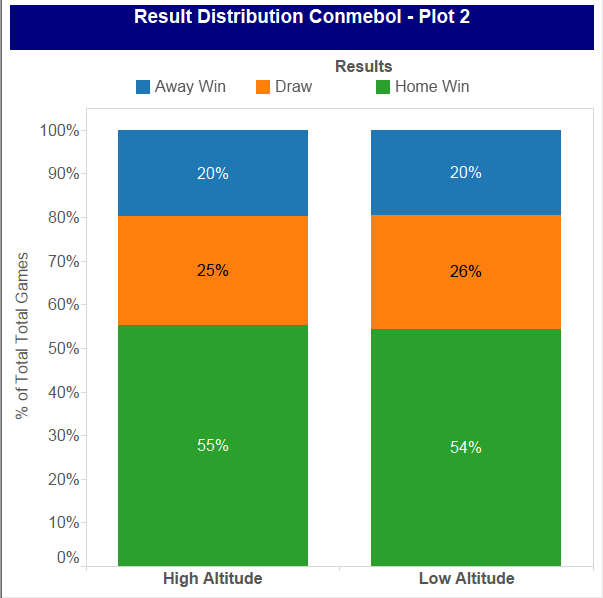 The second factor, which could be considered even more pertinent, is Bolivia’s record in the World Cup qualifiers. Looking at the table below we can see that they have finished second to last in 3 out of 4 qualifiers and last in the 2006 World Cup qualifier. This proves that their performance is well below the average and even though they have an advantage playing at high altitude, this is not reflected in the comparison in this study. In statistics this can be understood as an outlier, hence it would be appropriate to see what results we would get in plot 2 if we omit Bolivia.

With the exclusion of Bolivia, Plot 3 demonstrates that the distribution of home wins for the remaining high altitude team (Ecuador) is much stronger sitting at 71% versus 54% for the rest of the teams. It is significant to recognize that the proportion of draws sits at a similar level as in plot 2, and the majority of the winning proportion has been taken from away wins. Before we move on it must be stressed that conclusions from the third plot could be considered less reputable as we are only looking at 1 team versus the rest. However, it is undeniable that the results points in direction that there is an advantage for home teams playing at high altitude. 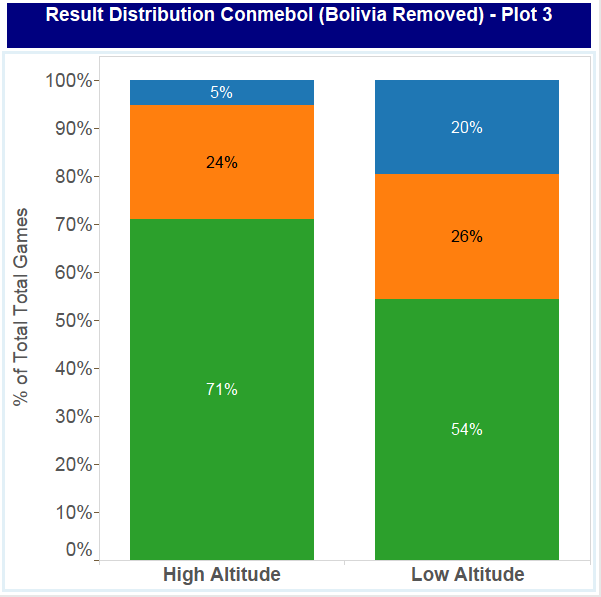 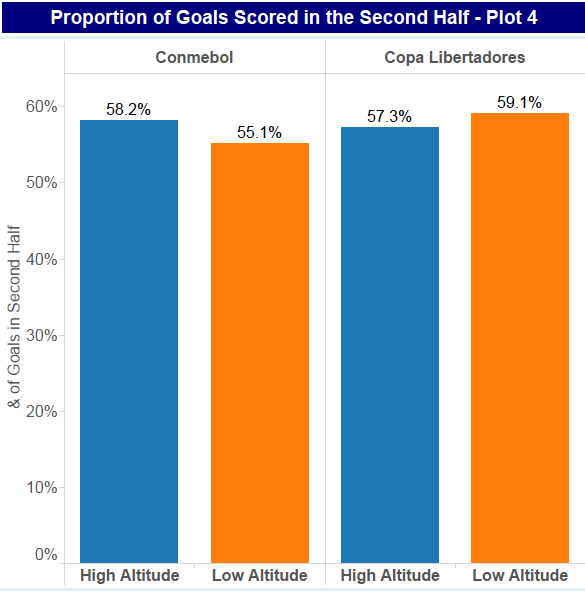 Overall, when investigating the impact of high altitude in football there are a number of learnings from the data. Looking at Copa Libertadores there is a strong suggestion that teams playing at a high altitude win more games at home. On the other hand, looking at Conmebol, we can’t confirm that there is a difference between high or low altitude performances. However, a closer look into the data showed that Bolivia’s poor performance had significant impact of proportion of home games won and an elimination of Bolivia significantly increased the proportion of home wins. Furthermore it could be suggested that the number of teams (and games played) in Conmebol may be too small to draw strong conclusions, not at least after omitting Bolivia. However, considering the strong trend in Copa Libertadores it is likely that Conmebol would see a similar trend if it included more teams (and/ or games).

Our final conclusion from this analysis is that there is strong evidence to believe that there is an increased home advantage when playing at high altitude, albeit this advantage is not (as one would expect) predominantly driven by goals scored in the second half.