The future stars of English football

Who are England’s future stars? Can Academy Players get their chance in the Premier League?

February 2016 when the commentator announced that Crystal Place midfielder Hiram Boateng was the first English academy product to feature in the first team in the last four seasons. ###>

This got me thinking, I wondered how many other English Academy players have made their debuts for Premier League’s clubs over the same period.

With clubs desperate to stay in the Premiership to receive the TV rights money for the 2016/17 season, clubs and managers find it difficult to risk blooding these young professionals for fear of the drop – even if the fans are crying out to see the latest English talent.

Below are the current Premier clubs and the number of Academy players they have played (at least once) over the last 4 seasons. Some have proved very successful and are household names, but the majority will only be known to that team’s loyal followers. 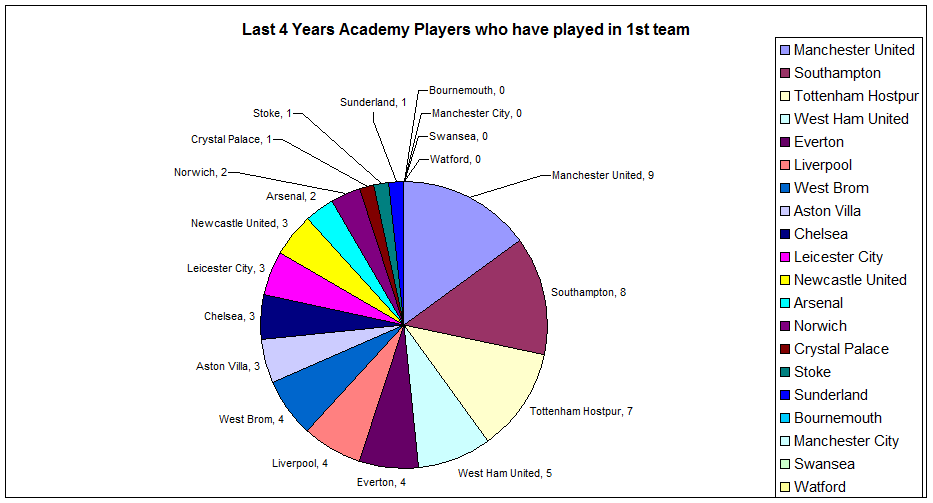 From the start of the 2015/16 season and throughout

Recent international tournaments have seen England under perform and these results have once again raised questions about the effectiveness of the Premier League youth academies. The list above contains 4 players that have at least 1 full international cap for England – all coming from Spurs (Harry Kane, Ryan Mason, Andros Townsend & Steven Caulker).

One young English striker to have emerged in recent weeks has been Marcus Rashford. This 18-year-old prodigy made his debut for Manchester United in the Europa League at the end of February due to an injury in the warm up to Anthony Martial, scoring two goals and has since gone on to score two more goals on his Premier League debut against Arsenal only a few days later.

Another player to score in this Arsenal game was Danny Welbeck, a former Manchester United trainee himself, he has since gone on to represent England 33 times, scoring 14 goals.

The Old Trafford faithful will be hoping that Marcus will be given further opportunities in the first team to progress and hopefully one day he will be making such an impact at international level for England. There have been stories in some circles of a possible call up for Euro 2016 and whilst this may be slightly premature, stranger things have happened. A 16-year-old Theo Walcott was named in the squad for Euro 2016 at the tender age of 16 having made only 13 senior appearances and none of these coming in the Premier League.

Marcus Rashford has already made his Premier League debut and scored two goals so in that respect, it’s difficult to discount the idea but I’m sure the focus will be on keeping his feet firmly on the ground and making an impact for his club.

The questions are: Who else can make the step up to play regular first team football for their clubs and eventually have the chance to play for their country? Will our Premier League managers be willing to put their jobs on the line to give youth a chance?