The Football League One Play Offs - Is momentum important?

In the second of a series of reports, TSZ is investigating the position the eventual play off winners finished in the league and whether momentum from the last 6 games plays an important role. This piece will be focusing on League 1.

League 1 has two automatic promotion places available with 3rd, 4th, 5th and 6th all fighting for promotion via the play offs. To begin we will look at where the eventual play off winners have finished in the league over the last 10 years. 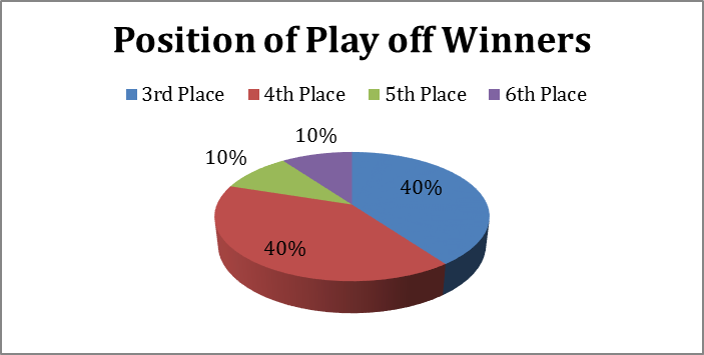 - The stats clearly show that finishing in the top two play-off positions has yielded the greatest success, with 80% of teams finishing 3rd or 4th being promoted over the last 10 years.

The next step is to look into the role of momentum for teams going into the play offs. Do teams with this coveted momentum have an advantage or does the quality of teams throughout the season which sees them finishing in 3rd or 4th, just behind the automatic promotion spots shine through- TSZ will investigate the form from the last 6 games over the last 10 years. The numbers in red denote the play off winners for that season.

- Momentum doesn’t seem to be a decisive factor when it comes to looking at the eventual winners. Only 3 teams that have had the outright highest points total in the final 6 games have gone on to be the play off winners.
- Conversely 2 teams that have had the lowest outright points total in their last 6 games have also won promotion via the play offs.
- In the 2006/2007 season Blackpool have shown how important momentum can be as they won all 6 of their remaining games and carried this good form on to gain promotion; however the stats over the last 10 years simply don’t support the importance of momentum.

The key bits of information this investigation has brought up is that finishing in either 3rd or 4th place yields a 80% success rate of promotion in the last 10 years. Whilst momentum going into the play offs doesn’t seem to have much bearing in League 1.

Will the recent trend of 3rd or 4th placed teams gaining promotion via the play offs continue this season?