The Evolution of Test Cricket

Inspired by some sensational play by Ben Stokes in the series between South Africa and England, we decided to take a closer look at how test cricket has evolved over the last three decades.

Splitting the last 30 years of test cricket into ten three-year periods, the first step of our analysis was to look at average run rates. We chose three years as a solid sample size with each period containing an average of 115 test matches.

With the general sense that with the likes of rapid scoring batsmen such Stokes, AB De Villiers, Warner and McCullum around, there would surely be an rise in run rates, and we did indeed observe an increase over the thirty years. 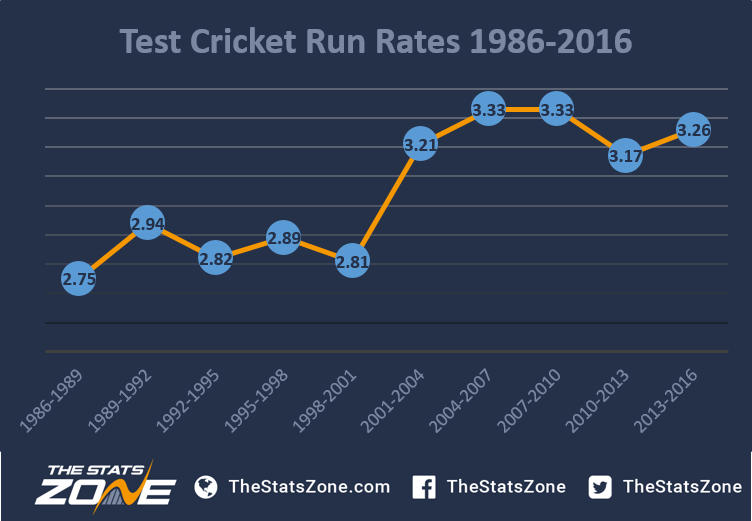 Interestingly however, run rates in test cricket have largely been consistent over the last 15 years between 3.17 and 3.33 runs per over. Compared to the previous 15 years that saw averages between 2.75 and 2.94, that is a significant increase. Another factor to note which has undoubtedly had an effect on test cricket is the introduction of shorter version of Twenty20 cricket. With the new format being launched in 2001, and really kicking on in the subsequent years, it is fair to say the development has contributed to the increase in test cricket.

The next step of our analysis was to look at whether this had in turn led to more matches having a decisive outcome and less draws. 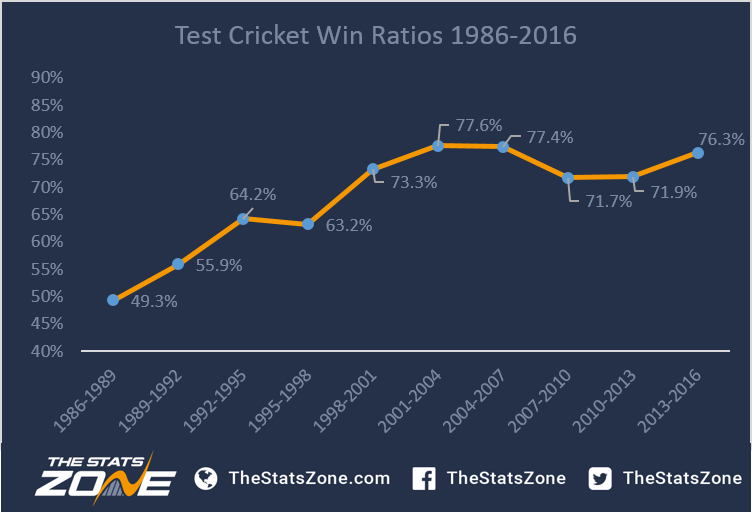 Yet more evidence of a significant increase over the last thirty years with over 70% of matches being won by one team or another in the last 15 years compared to less than half of them back in 1986-1989. Of course, these two data points are far from being intertwined as there are a whole host of reasons why this increase may have happened such as preparation of pitches, weather, quality of players and so on. However, one thing is for certain, these developments are leading to more entertaining play in test cricket, and it will be fascinating to see how it evolves in the next 15 years.