The Demise of Scottish Football

With not a single Scottish team making it through to the knockout rounds of either the UEFA Champions League nor the Europa League, TSZ decided to take a look at how Scottish teams have fared over the last decade and to what extent their performance has declined over time. Our first step is to look at Scotland's UEFA club country coefficient over the last ten seasons. 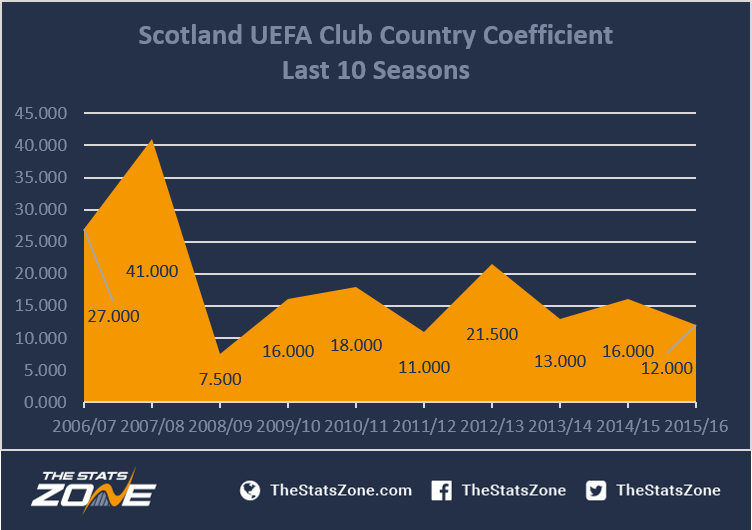 With a couple of solid seasons early in the decade, the numbers have dropped off in general in recent years. After an excellent campaign for both Rangers and Celtic in the 2007-08 season where they racked up 41.000 coefficient points, their next highest has been 21.500 since then. The main issue with having one exceptional season is that once that season drops out of the five-year window for allocating positions for future editions of the club competitions, the likelihood is that the number of European places will reduce which is what has happened. To add further context, we looked at how Scotland ranks among the 54 member associations each season. 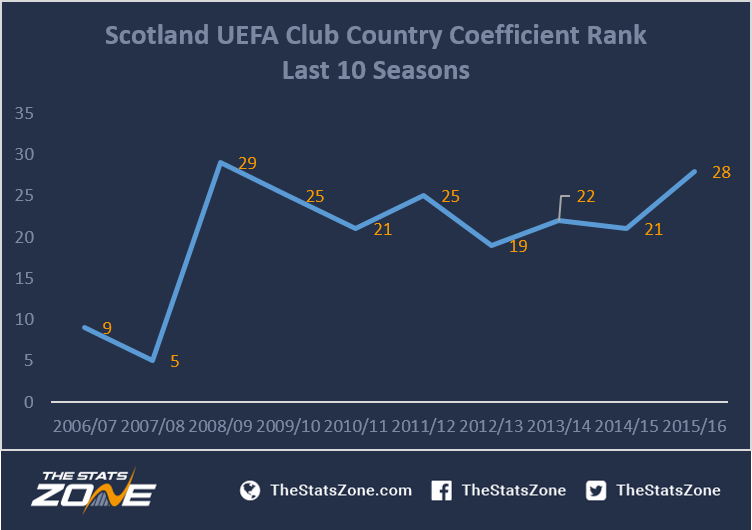 From being in the top ten in the first couple of seasons of the last decade, the fall has been significant ranking between 20 and 30 of the 54 nations.

The lack of competition in the league may well be a factor to some degree. Since Rangers were demoted, the league has generally been a formality for Celtic given the gulf in quality between them and the other sides. This season is as close as any at the top of the table with Aberdeen making a credible challenge for the title, but if anything, one would point to the quality declining at the top end rather than the rest of the league improving in quality. Literally removing one of the top two teams from any nation would likely see a negative effect on European performance, especially in leagues outside of the major ones. So how have results broken down in the last ten years?

We started by looking at the qualifying phase and then the tournament phase from Group Stage onwards and it was specifically that phase that was most revealing behind the declining coefficient. Results were relatively strong in the first two seasons, yet were worse over the following eight seasons combined with only ten group stage or knockout round wins compared to 15 in the previous two seasons. Essentially against the crème of Europe, they have struggled to maintain performance levels and results. In turn this is leading into something of a vicious cycle as their coefficient continues to fall and they have less participants in European club competitions. Something fundamental is going to have to change to return to their previous glories.