Team GB Olympic Medallists: Where Do They Come From?

With Rio 2016 in full swing, here at TSZ we have decided to keep the Olympic theme going and are asking the question – what part of the country do our Olympic medallists come from? We will be looking at all Olympic medallists from and including the games in Atlanta 1996, through to and including Rio 2016 (all medallists up to close of play on Day 13 included). We will be investigating where they were born and which areas of the country have bred the most medallists.

First up, we will take a look at a breakdown of the medallists from the different countries of the UK, with consideration also given to those born outside the UK but competing for Team GB. 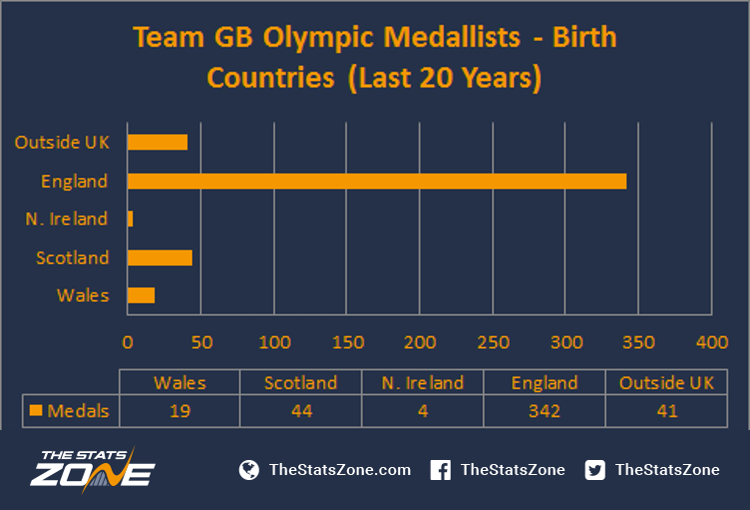 It is no surprise to see England way out ahead as they are by far the biggest country with 342 medals. Scotland outperform Wales and come in behind England with 44 medals, although they do have a slightly greater population (approx 5.3 million compared to 3.1 million). Those born outside the UK and competing for Team GB have contributed almost as much as Scotland in the last 20 years; with Mo Farah and Sir Bradley Wiggins leading examples.

With England so far out ahead we decided to break the country down into South, Midlands and North to see which part of England has bred the most medallists. 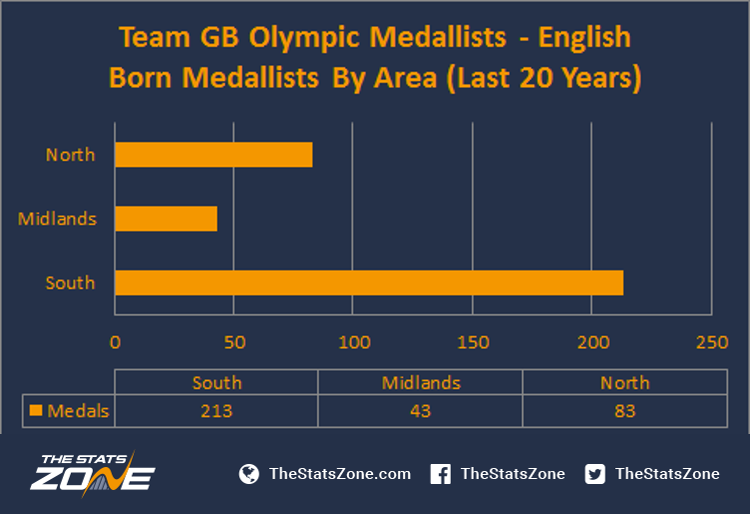 In the battle of the areas of England there is a clear winner, with the South breeding by far the greatest amount of medallists with 213. In second we have the North with 83 medals and the least productive area in England is the Midlands with 43 medals. We can really see how much of a powerhouse the South of England is when we consider that their total of 213 medals is better than the combined total of the Midlands, the North, Scotland, Wales and Northern Ireland, who boast 193 medals between them.

After an investigation into all the medallists from the last 20 years, below is the Top five performing counties throughout the whole of the UK.

It is no surprise to see that the top two performing counties are from South England, with Greater London taking top spot with 52 medals, beating Surrey with 24; however, it is worth noting that Greater London has a population of 8.3 million, compared to Surrey’s 1.1 million – a remarkable effort from Surrey considering. Greater Manchester has bred the joint third most medallists along with Lanarkshire (17); both these take the honour of topping their respective regions of Northern England and Scotland.

The South of England taking the top spots was to be expected given their larger population size of 28 million, whilst the Midlands have approximately 10 million and the North approximately 15 million. For the purpose of this analysis we split up the Yorkshire Counties separately, however, if they had been included as a unit they would have taken the second spot of best performing counties. A good achievement when you think of the difference in population numbers between Yorkshire and Greater London.

Yorkshire has an approximate population of 5.3 million, considerably lower than that of Greater London. Over the last 20 years. Yorkshire has bred 33 medallists and in London 2012 they would have finished 12th in the Medal’s table if they were classed as an independent country. 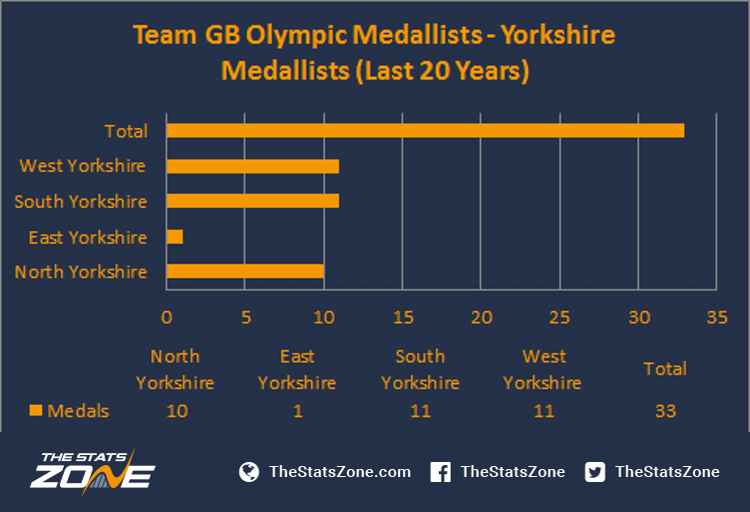 This investigation has shown that Southern England is the top dog in terms of breeding Olympic medallists, and more specifically the County of Greater London is the biggest contributor, with those medallists born in Yorkshire and Surrey putting in a tremendous effort considering they are less populated. It also has shown that those born outside the UK have contributed significantly to GB’s medal tally over the last 20 years, amassing 41 medals.