There is a lot of conjecture around the world about what type of bowling works best in certain conditions. For example, it is said teams should build their bowling stocks around strong spin bowlers when touring countries in Asia (India, Sri-Lanka) and utilise strong pace line-ups when in Australia.

With the upcoming T20 world cup fast approaching and countries naming their touring squads, I have decided to analyse the past 10 T20 international matches played in India and look at the success of spin, versus pace bowling in addition to analysing all completed T20 internationals played on the sub-continent in the past 12 months.

The reason for selecting the past 10 games in India was to not go so far back in time that the players are no longer relevant in the game. Due to not many T20 matches being scheduled outside of world cups, even going back only 10 matches meant looking up scorecards from nearly five years ago which meant many of the current day players were not playing.

For this analysis, I looked at three of the key performance indicators for bowlers. 1) wickets taken 2) economy rate and 3) strike rate (number of balls per wicket). In addition, I also analysed the number of times pace and spin bowlers economy rates were over and under 7 RPO (runs per over). There is no universal economy rate used as a measuring tool, so the reason for choosing 7 RPO was because if all bowlers achieved this number, the total runs scored by the opposition would be a total score of 140. This score is considered below average in international T20 matches.

Using the last 10 T20 matches played on Indian soil, economy rate and overs bowled per match were quite similar. The only significant difference was seen when comparing the average number of wickets taken by pace bowlers per match (63%). 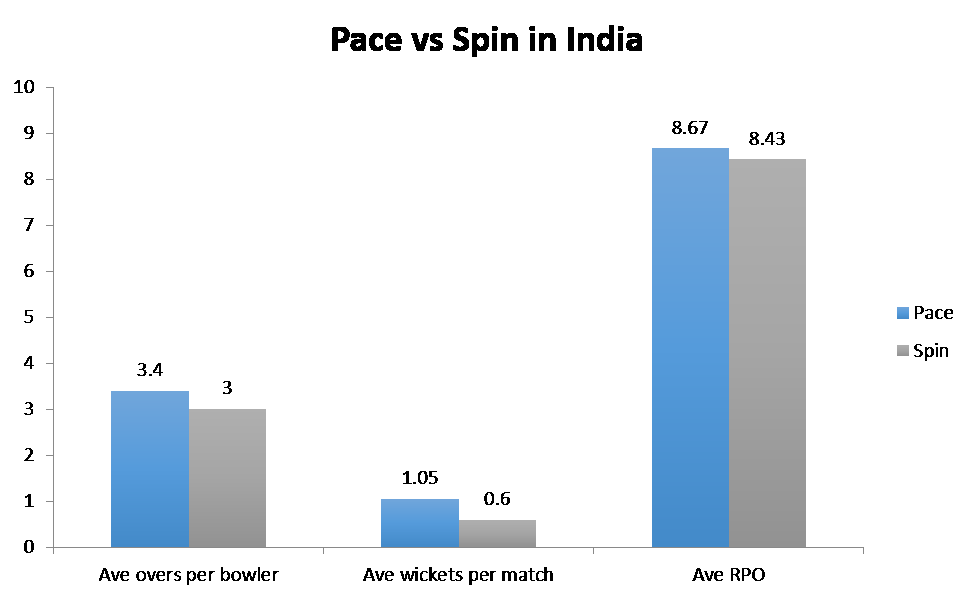 When further investigating the economy rates between spin and pace bowlers we can again see very similar results. These results show that per spell of bowling, the rates of both pace and spin bowlers go for over and under seven runs per over at an extremely similar rate.

When looking at strike rate, there is a large difference between the number of balls per wickets when comparing spin and pace bowlers. 12-month sub-continent comparison

In 2015/16 there was a total of 15 T20 matches completed when this analysis occurred. The same KPIs were analysed for this sample as were the previous matches played in India.

These results show that the average spin and pace bowler are not so different when it comes to overs per match and wickets per match. However, this is a discrepancy when looking at RPO. Pace bowlers are conceding roughly 1.5 extra runs per over when compared to spinners in the sub-continent over the past 12 months. 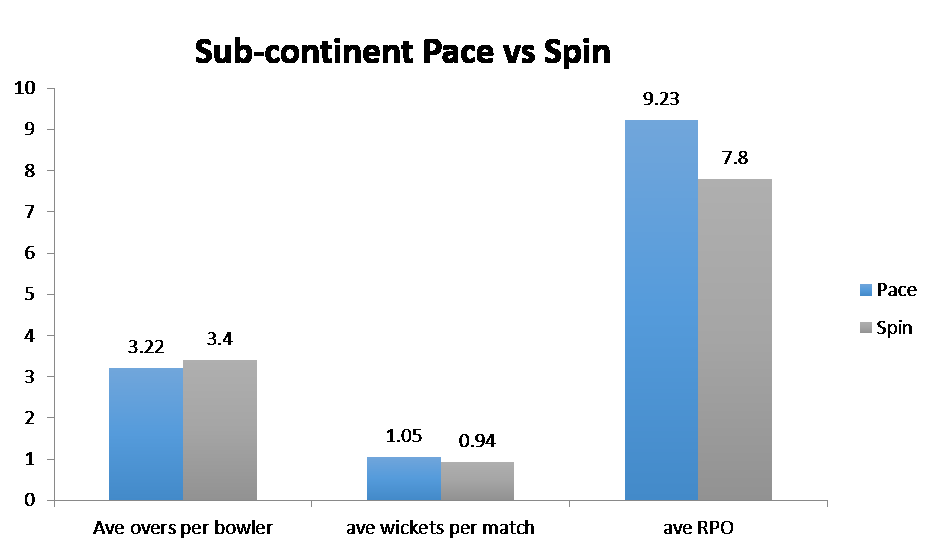 The results also show a comparison between the rate that pace and spin bowlers economy rates are over and under 7 runs per over.

There was minimal difference seen in strike rate between spinners and pace bowlers from games played on the sub-continent in the past 12 months.

So what do these results actually mean? As mentioned previously, the common train of thought when picking a squad of players to travel to the sub-continent is to heavily involve spin options, more so than fast bowlers.

The results obtained show that there is no real major difference in relation to success of pace vs spin bowlers. In total, pace bowlers took a lot more wickets (213) compared to spinners (120). However, it must be mentioned that fast bowlers (689) bowled a significantly higher number of overs than spinners (445), meaning that the actual average number of wickets per spell of bowling per match was very similar.

Another interesting statistic was the rate at which spinners and quicks went at under and over 7 runs an over. In both sets of matches, almost identical numbers were seen (60% over, 40% under). This again suggests that there is no real favourable bowling style when playing on the sub-continent.

There was a moderate discrepancy when it comes to the economy rate in favour of spinners in the sub-continent (7.8 compared to 9.2). Although it may seem like a small difference, 1.4 runs an over (for the full20 overs) equates to an extra 28 runs that the batting team then has to chase down, which in T20 cricket can be highly significant (there’s a massive psychological difference between chasing 168 opposed to 140). The other significant outcome was seen in the matches played in India, where pace bowlers averaged 0.5 more wickets per match than the spinners, which contradicts the popular notion that India is a fast bowling graveyard.

Also adding intrigue to the results was the large discrepancy in strike rate when comparing spin and pace bowlers from the past 10 matches in India. Pace bowlers were able to take wickets in a lot less number of balls (19.47) compared to spinners (30.66). This again suggests that when playing in India, it’s not just all about spin.

This analysis sheds light onto the varying success rates of fast and slow bowling in India and the sub-continent. With the world cup fast approaching, this analysis is essential when picking touring squads and ensure that they select to their own strengths in the bowling department…..not select players based on preconceived notions of the environment. Whilst it may differ in the other formats of the game, based on these statistics, it does not seem to be the case.