A snapshot of the 2015/16 season shows the Champions League Final to be an all-Spanish affair after Sevilla beat Liverpool to win their 3rd consecutive Europa League but – do Spanish teams have the edge over the rest of Europe when it comes to European competitions?

The last 9 winners of the Champions League have unsurprisingly come from the 4 strongest nations in Europe; Spain, England, Italy and Germany. The following table shows previous winners by their country:

4 of the last 9 finals have been won by Spanish teams, with that figure increasing to 5 out of the last 10 as this year’s final is once again between the two Madrid Clubs.

The following pie chart shows the country representation in the final of the Champions League in the last 10 years: 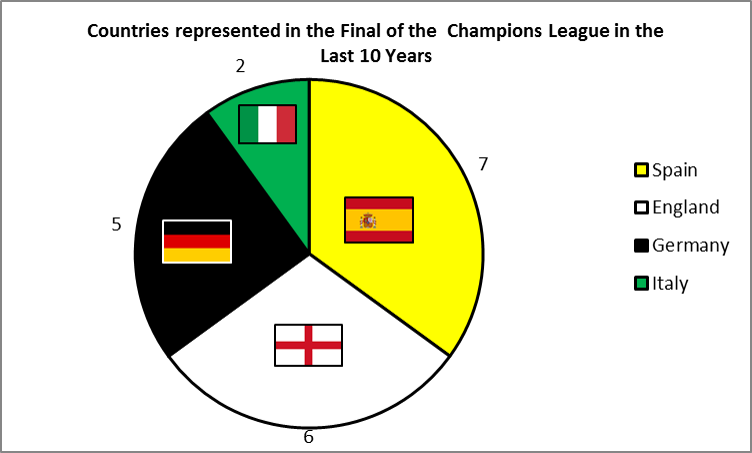 Top Teams of the last 10 years

So which clubs have dominated Europe over the last 10 years?

Both Spain and England have win percentages of over 50 which is fairly impressive. Interestingly Spain has been represented by 9 clubs over the last 10 years whereas only 6 English clubs have featured but have still played more games collectively than the Spanish sides. The Spanish League until recently was often seen as a two horse race (Barca, Real Madrid) meaning there was always big competition for the 3rd and 4th

Champions league spots. The Premier League has had at least 3 teams (Chelsea, Arsenal and Manchester United) that have been extremely consistent over the last 10 years, meaning it has been harder for other teams to qualify for the tournament.###>

Who has the Upper Hand?

Which nation has had the upper hand against the other nations over the last 10 years then?

The table shows Spain to have a slight edge over the other nations, but only just. They are the only nation to have won more games than they have lost against each of the nations but their record against English teams is very closely matched in particular - their highest win percentage is only 45% against German teams.

The strength of Spain and England in the Champions League over the last 10 years is clear, whilst there is a sign of Germany and Italy beginning to slightly lag behind.

In the last 10 years, English teams have featured in the Knockout stages of the competition the most with 34 appearances, Spanish teams 2nd with 31 followed by Italian teams with 27 and German teams last with 22 appearances.

The following table shows which teams are the strongest when it comes to the vital Knockout ties, only teams that have played more than 5 ties have been entered in calculations:

Once again Barcelona have come out on top with an incredible 22 wins in the knockout stages whilst losing only 6 times. Over the course of the two ties, their class prevails. Surprisingly, Real Madrid are not featured here as they were knocked-out in the last 16, 4 years in a row from 2006/07-2009/2010, meaning their Knockout Win % is only 60%.

Does one nation stand out from this point in the competition?

For the first time, a clear winner has emerged; Spanish teams have won over two thirds of Knockout ties, almost 10% more than English teams in 2nd place with 57.78%. Bayern Munich account for over half of German wins in the knockout stages which is not a massive shock considering their domination over the Bundesliga. Italian teams have overall lost more ties than they have won which is quite surprising considering both Milan and Inter have won the Champions League in the last 10 years.

So have Spanish Teams dominated the knockout stages against the big teams or have they been lucky in avoiding the bigger nations?

And the answer would be yes. You really see Spain’s dominance over the other major nations in the Knockout Phase. Spanish teams collectively have won 29 ties with 15 losses against English, German and Italian teams. English teams have a poor record against German Teams (ie Bayern Munich – all 4 defeats are against them) as well as Spanish Teams, but they have dominated Italian teams over the last 10 years. In fact Italian teams have a very poor record overall. The table essentially shows a pecking order of Spain-Germany-England-Italy in the Knockout Stages, although you could say the only reason Germany are 2nd is due to Bayern Munich.

Barcelona and Spain have been the dominant force over the last 10 years in the Champions League, but what about in the Europa League? The real sign of a strong league is by competing over both competitions, so let’s take a look…

Since the Europa League was rebranded in 2009, the winners of Europe’s 2nd elite competition are:

Spanish Teams have won 5 out of the first 7 editions of the Europa League after Sevilla’s emphatic win over Liverpool in this year’s competition. The only other nations to have a team win the Europa League are England (Chelsea) and Portugal (FC Porto). This already highlights the strength of the Spanish League if say their 5th

or 6th strongest teams win this competition consistently. Let’s have a look which nations are represented in the final of the competition since it was rebranded:###>###> 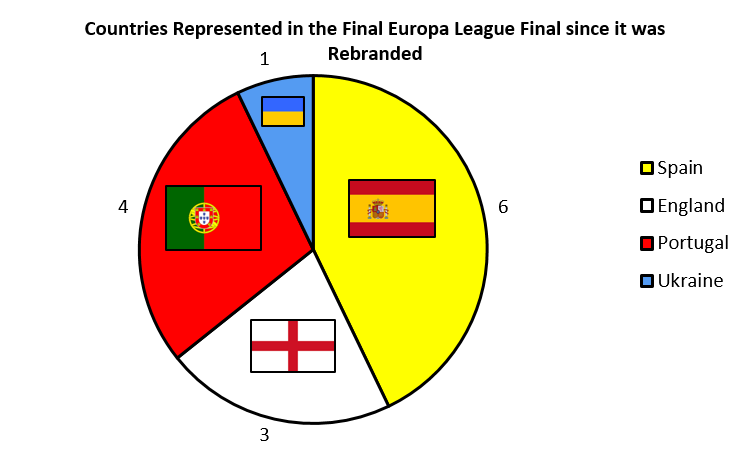 Again Spain have had the most amount of teams in the final of a European Competition. And once again the only time a Spanish team has lost in a final of a European Competition (in the given time frame) was against another Spanish team. Shockingly there hasn’t been a German or Italian Team in the Europa League final, whilst Portugal have represented their country in the final 4 times, although only once have they prevailed – that being against a Portuguese opponent. These are Portugal’s strongest teams reaching the Europa League Final to meet Spain’s 5th

or 6th strongest teams, just to highlight the difference of strength in their leagues. ###>###>

Strongest Teams of the Europa League

How many teams from each country have consistently featured in Europe over the last 10 years then?

Teams to feature in Europe (min 40 games) along with combined games played:

· The Europa League being in rebranded in 2009 means 3 years’ worth of less data.

· The competition has more teams in it, meaning more teams from other nations, meaning less chance of these 4 countries’ teams playing against each other.

No shock now to see Spanish teams once again having a far superior record against the other 3 countries. English and Italian teams are quite evenly matched against each other. Most interestingly is the poor record of German teams, possibly highlighting a lack of quality in the German League this time, after Bayern and Dortmund, is the league that strong?

England, Germany and Italy, found out in the knockout stages again?

Who are the strongest teams when it gets to crunch time of the tournament? (min 5 ties)

There are some very strong records here, particularly from Sevilla and Atletico Madrid who have both only lost once in the knockout stages despite reaching this stage on 2 and 3 occasions respectively. Chelsea top the table after winning the Europa League in their only appearance in the competition, whilst Fulham lost in the final to Atletico. One point of note is that only 6 teams have played more than 10 knockout ties – 5 of these are Spanish, the other being Liverpool.

On average Spanish Teams win around 3 of every 4 knockout ties which is some feat. English teams have quite a strong win percentage over the 2 fixtures, whilst Germany again have the weakest win rate here.

This statistic is staggering; on only 3 out of 18 occasions has a Spanish opponent lost to either an English, German or Italian team. English clubs continue to be the 2nd best in the Europa League whilst the German teams have a dire record in the knockout stages against the big teams, only winning 3 out of 16 ties against the other 3 nations.

This thorough look into both of Europe’s competitions demonstrates the domination by Spanish teams in Europe over the last 10 years. The English Premier League is often said to be the best league in the world but you would struggle to justify that argument on this evidence. After the two Madrid clubs contest this year’s Champions League final, the last 3 winners of both the Champions League and Europa League will have been Spanish Teams, utter dominance you could say.