Should Alan Pardew Be Under More Pressure At Crystal Palace?

With Crystal Palace manager Alan Pardew having recently signed a new contract, TSZ looks at whether this was justified by focusing on his record as a Premier League manager and if recent trends suggest he could be under pressure in the upcoming season, despite his fresh deal.

One of the lasting memories of the 2015/16 football season saw Pardew involved in a somewhat controversial moment – not for the first time in his managerial career. Whilst it wasn’t quite head-butting a player or shoving a linesman, it still got plenty of people talking. After his side had taken a late lead against Manchester United in the FA Cup Final, the attention turned to Pardew as he danced on the touchline. A large section of the media criticised this after the game, with some going as far as saying it caused a distraction for his side and allowed Man Utd to equalise soon after – the catalyst for the Red Devils winning the game in extra-time.

That loss brought to an end a disappointing season, although it could have been very different. After spending the majority of the first half of the season in the top six, a European spot should have been the target. However, an awful run that began with a draw away at Bournemouth on Boxing Day would see Palace win just two of 21 games for the remainder of the season. 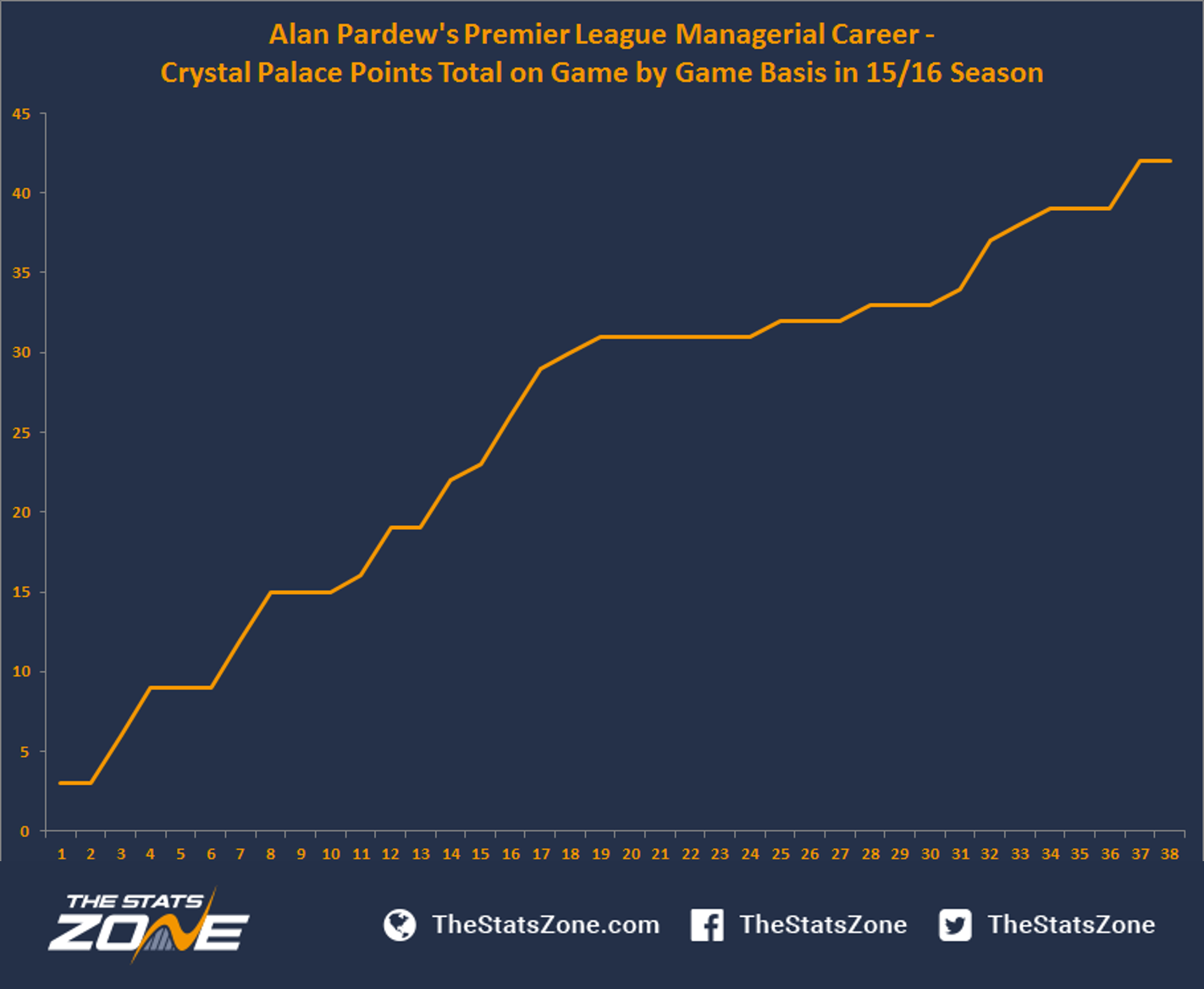 As the above graph shows, Palace did well in the first half of the season but struggled in the second half. There was a sharp incline up until Christmas, but this levels out hugely with only small increases from then until the end of the season due to their terrible form. Palace had collected 29 points after 17 games - that spell yielded 1.71 points per game (PPG). However, just 13 points were added to that total in the remaining 21 games at 0.62 PPG. That alarming dip in form isn’t the first time that Pardew has overseen a poor second half to the season. 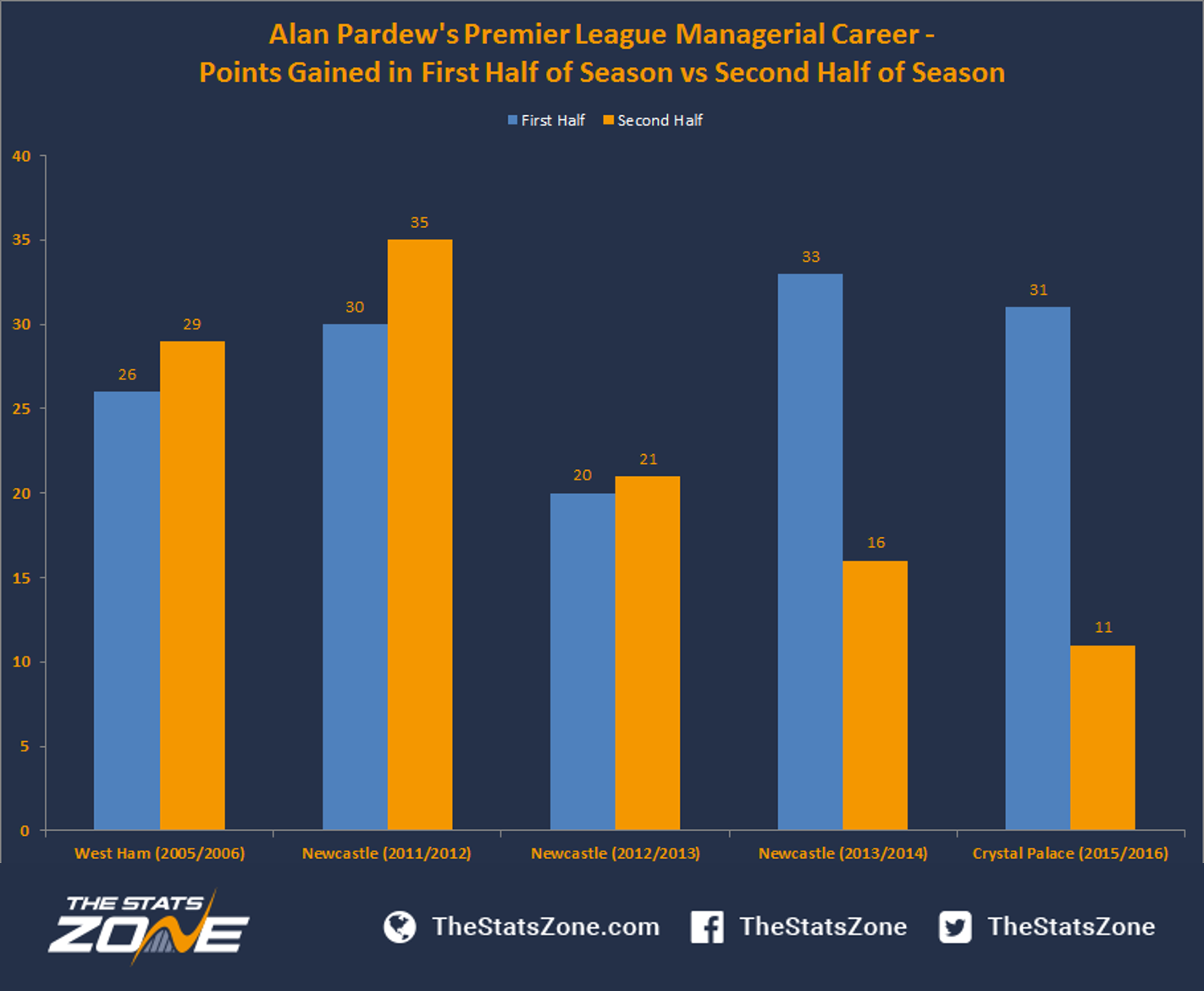 With poor spells evident based on these numbers, it’s worth looking further back into Pardew’s managerial career to see if he experiences any other distinctive periods. 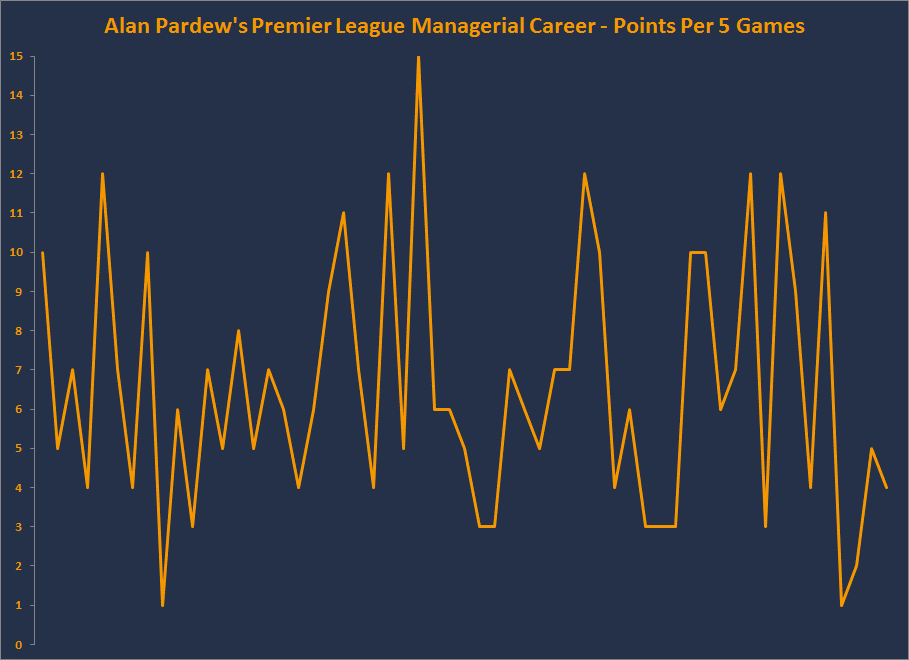 The above graph shows us that Pardew struggles with consistency, with lots of sharp peaks and drops over five-game periods. Of the 285 Premier League games that Pardew has overseen, only four times has he delivered eight points or more in back-to-back five game spells. This inconsistency is also highlighted when looking at his streaks at each Premier League club he’s managed. 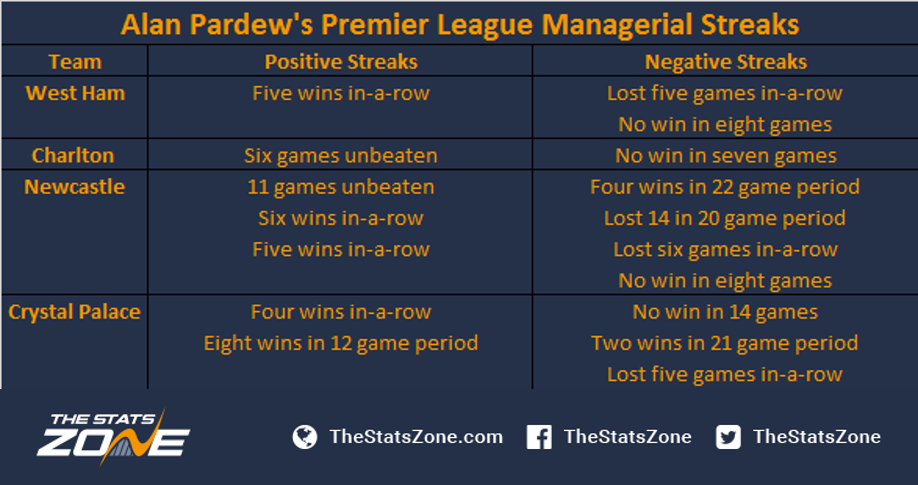 Although Pardew has shown he can put together winning and unbeaten streaks, these are often far outweighed by losing and winless runs. Newcastle fans were criticised for their campaign to remove Pardew as manager but when you look at those streaks, it’s easy to see why they didn’t want him in charge of their club. No other manager has lost five consecutive Premier League games with two different clubs – Pardew has done it with three. 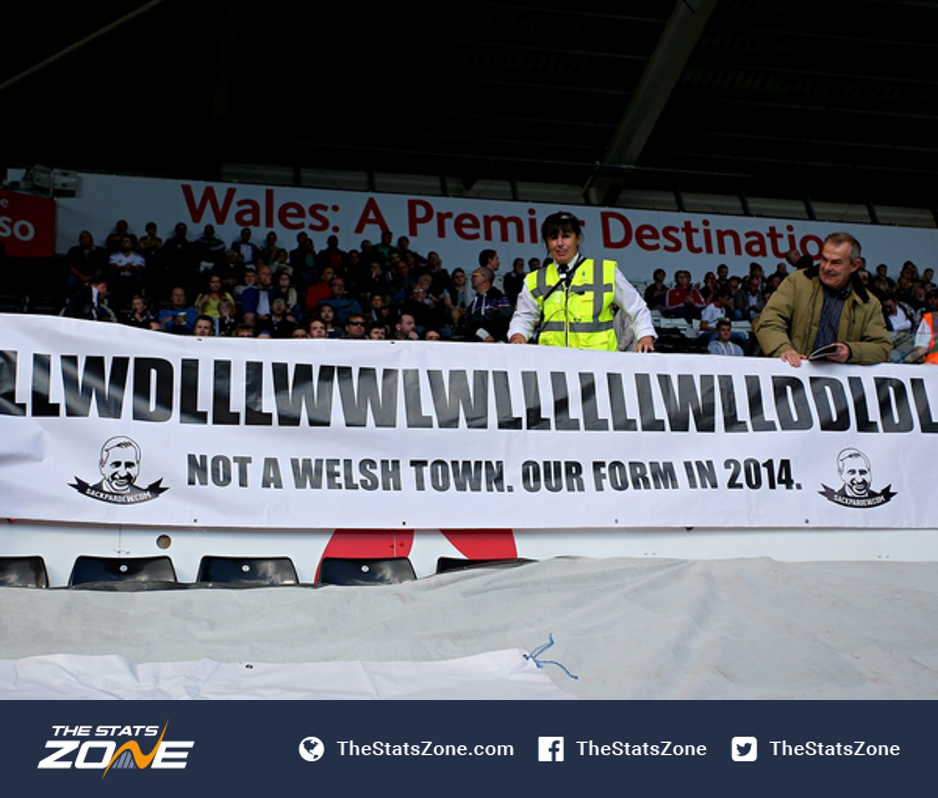 Recent history suggests Pardew struggles to pick up points in the second half of a season which, when isolated, is clearly relegation form. If Palace don’t start the new season as well as last season they could be in trouble, and Pardew may find himself struggling to save his job. If this proves to be the case, will we see the familiar excuses that have littered his past? And how long before he's accused of masking his managerial deficiencies with deflection and ego? One thing is for sure - two wins in 21 games speaks for itself.