The Summer Olympics is in full swing in Rio. Every 4 years, The Olympic Games is a platform to see new stars from around the world bursting onto the scene, as well as older stars shining bright at their final performances in their chosen sporting careers. This year, among the athletes soon to retire is swimmer Michael Phelps from the USA, who has stolen the headlines in the first week of this years’ Olympics. He has won an impressive five golds and one silver medal, which takes him to a total aggregate of 28 Olympic medals (23 gold, three silver and two bronze) in his Olympic career, twice as many golds as any other Olympian. When we compare his record to country totals, it is even more impressive - he has won more gold medals than a total of 62 countries (1896-2016).

To achieve something as exceptional as Phelps requires sustaining an incredibly high level of performance throughout a sporting career - regardless of age. As you get older, it is harder to keep in the same shape as during your peak years. Obviously, different sports require different levels of strength and agility, and hence the impact of age varies. For example, swimming is physically strenuous so it would be more difficult to maintain the highest level of performance than a less physically demanding sport such as shooting. It’s important to also consider the flip side – that of being too young; in some sports it is possible that you won’t have developed the required physical attributes.

With this in mind, TSZ has decided to explore the historical data of medal takers throughout the Summer Olympics. We want to figure out what the peak age is for medallists and how this compares between women and men. Furthermore, we want to drill into the data to compare the average age of medal winners across different Olympic sports. Finally, we would like to see if certain countries have a propensity to produce young or old medal winners.

Before we get started, we would like to point out a few considerations. The data has been provided by the IOC (International Olympic Committee) and includes every medallist in the Summer Olympics between 1992 and 2012. All athletes that have participated have been taken into account in this study. This means that in the case of team sports, we have taken into account the whole team. In the instance where an athlete has won more than one medal, we have used the age at the time of each medal when calculating averages. We acknowledge that this might have an effect on average measures but still believe that it will be sufficient to draw conclusions.

We will start by looking at the average age for all medallists split by gender. Then we will identify the average age of medallists for each respective sport in the Olympics. Using the third and fourth graphs, we identify the oldest and youngest medallists for all sports. To take this a step further, we highlight the oldest and the youngest ever gold medallists for the two biggest sports (in terms of events) at the Olympic Games – Athletics and Swimming. In the final part of the analysis, we take the average age of medallists split by country to see if certain nations have a propensity to produce old or young winning athletes. Bar graphs are used for visualisations throughout this analysis.

Looking at the table below, we can see that the average age for men is 26.2 compared to the same measure for women at 25.2. Without reading too much into the gender aspect, the graph confirms, as most people would expect, that the prime age for an athlete sits in the mid-twenties. In terms of the split between the genders, we can see that this is minute (just one year). One possible explanation for this could be that females develop earlier than men and hence reach their athletic prime earlier. 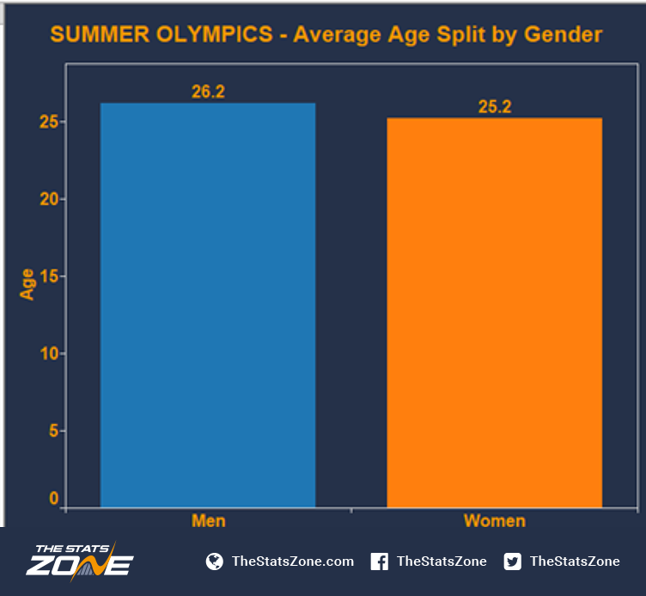 Moving on to the next graph demonstrating average age per discipline, we can see that the medallists in horse-related sports are the oldest, with an average age ranging from 35.9 to 37.5. In fact, the top four places in the graph are horsing events. Furthermore, we can see that all of the sports on the left hand side of the graph tend to be those where physical strength might not be the driving attribute for success, which enables athletes to have a successful career at an older age. On the right hand side of the graph, the Rhythmic Gymnastics has the lowest average age at 18.5 years old followed, by Artistic Gymnastics at 20.5. The third and fourth youngest events are Swimming and Diving, with an average age of 22.2. This statistic makes Michael Phelps’ achievement at Rio (and before) even more spectacular, as he is currently 31 years old. Before moving on, it’s worth highlighting that nearly 80% of all sports in this study have an average age for a medallist sitting between 21 and 29 years of age. 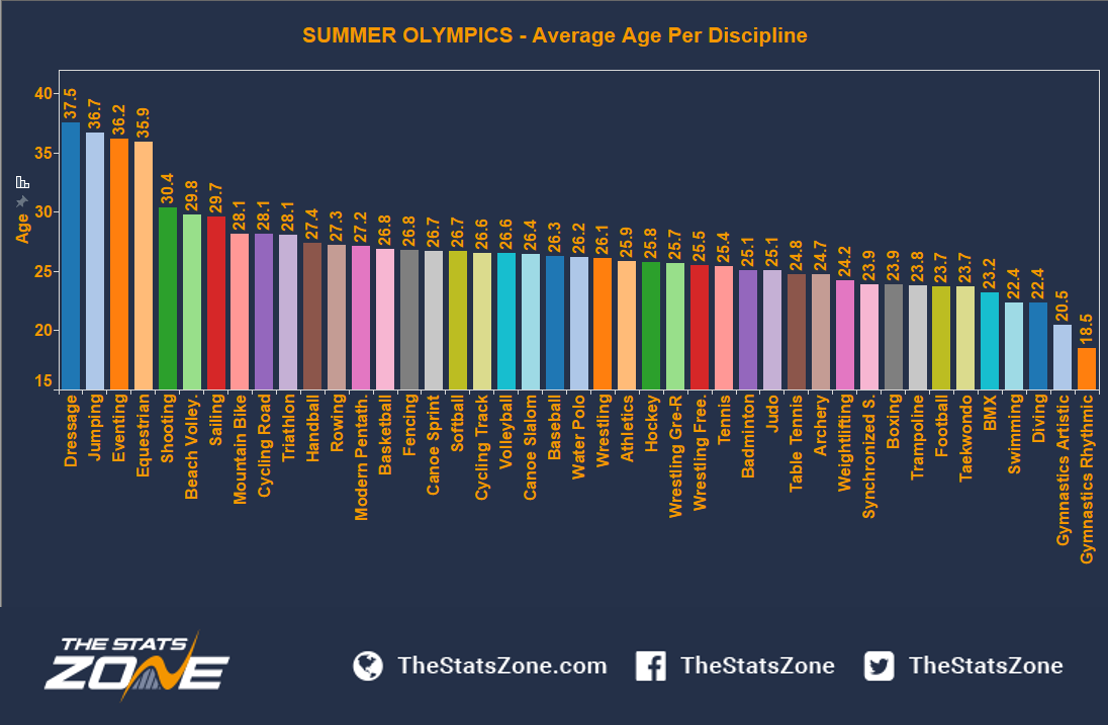 The next graph demonstrates that the Canadian Horse Jumping athlete Ian Millar tops the list of the top 10 oldest athletes in the Olympics between 1992 and 2012. He was at the impressive age of 61 when he won his silver medal at 2008’s Olympics in Beijing. Following him is the Swedish shooter Ragnar Skanåker, who won a bronze medal in 1992 in the Barcelona Olympics when he was 58. Using the raw data to drill down to gold medals only, we can see that Klaus Balkenhol holds the highest position having won a gold in Barcelona 1992 at 53, not too surprisngly in dressage.

Moving on to the youngest ever medallists, Yun Nian won a bronze medal in 4x100m freestyle Swimming for China in the Atalanta games in 1996 at the age of 13. The youngest gold medallist in the field is just one year older – an honour which goes to the Japanese swimmer Kyoko Iwasaki, who triumphed in the 200m breast stroke at Barcelona in 1992. Comparing this graph to the previous one demonstrates that the range from the oldest to youngest medallist is 48 years (61-13) and the same measure for gold medallist is 39 years (53-14).

With the recognition that different sports require different attributes, we have decided to look at the range in age for gold medallists in Athletics and Swimming. In the table below, we see that the oldest gold medallist between 1992 and 2012 for Athletics is Ellinia Zvereva who won the gold medal for Discuss Throw in the 2000 games in Sydney at the age of 39. At the other end of the spectrum is Kamila Skolimowska, who was just 17 years old when she won the Hammer Throw in the same Olympics. In comparing these two athletes, we can see that there is a difference in age of 22 years (39-17), which is a remarkably smaller difference than the previous comparison for all sports. 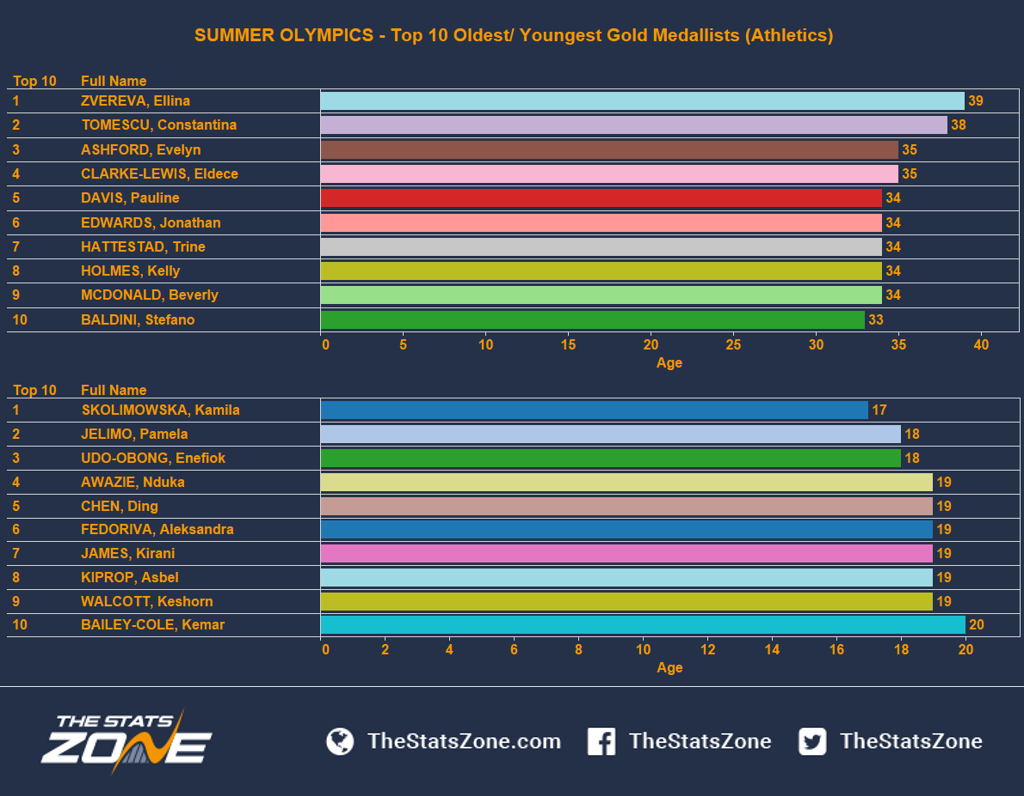 Looking at a similar graph for Swimming, we can see that Dara Torres won the 4x100m freestyle in Sydney and is the only gold medallist who was 30+. As we mentioned, the data set only runs to 2012 – obviously if we were to rerun this piece when the data from 2016 was released, Phelps would top this chart. The next graph shows, as we previously pointed out, that Kyoko Iwasaki is the youngest ever gold medallist in Swimming at an age of 14. This means that the range between the youngest and oldest medalists in Swimming is 16 years – notably a much closer gap than we saw in Athletics. If we look at the average age per discipline graph (the second graph in this article), we can see that the average age for Athletics is 25.9 compared to 22.4 for Swimming. This essentially means that genereally speaking, swimmers peak at a younger age and naturally retire earlier (with the oldest medallists signinficantly younger than those in Athletics). 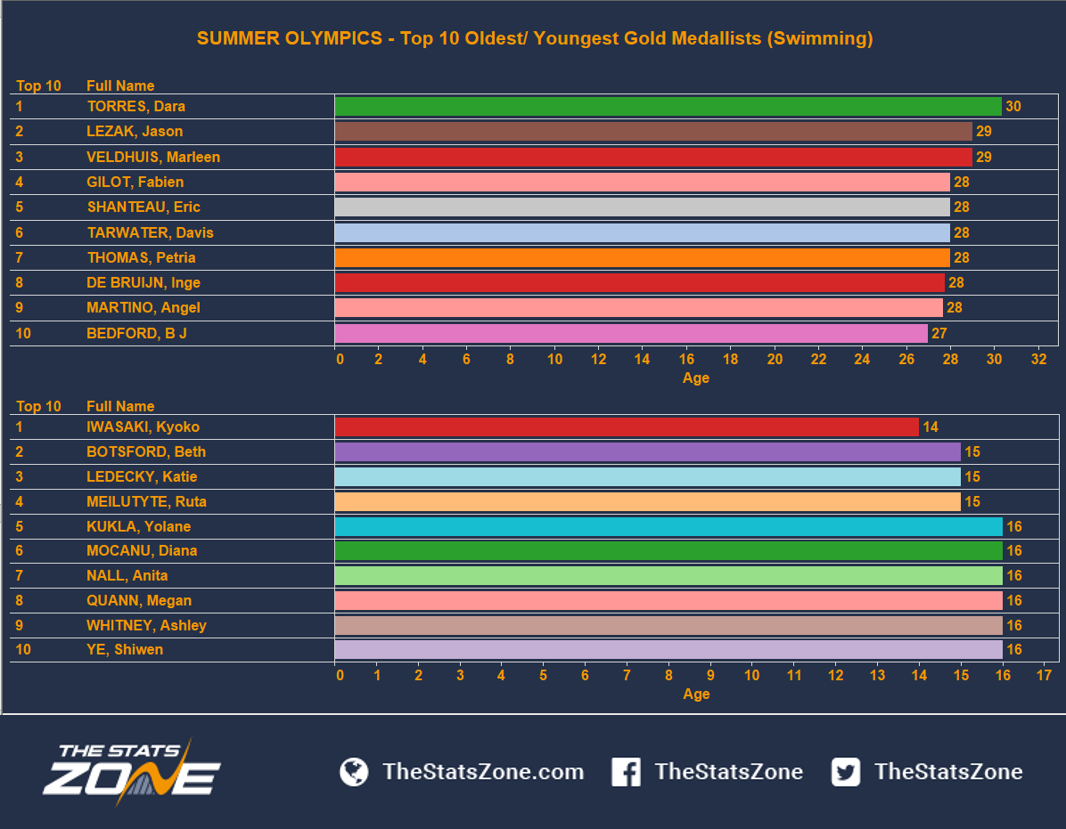 One would presume that certain countries are good at different sports, and therefore might have a higher/lower average age for their medallists. Looking at the top graph below, we can see that UAE, Kuwait and Peru are at the top of the list, with an average age of athletes ranging from 37.0-40.0. After this there is a significant drop to Saudi Arabia with an average age at 32.0. Looking at the bottom graph, we can see that Botswana, Ghana and Grenada all have medallists with an average age under 20. A common denominator for the countries on each side of the scale shows that they only contain one total medal each in the total data set. Therefore, the sample size of medallists with extreme ages is much smaller than the majority, which makes it harder to draw conclusions from these results. Furthermore, Ghana won their bronze medal in men’s Football which is an under 23 tournament, making their average age naturally young. 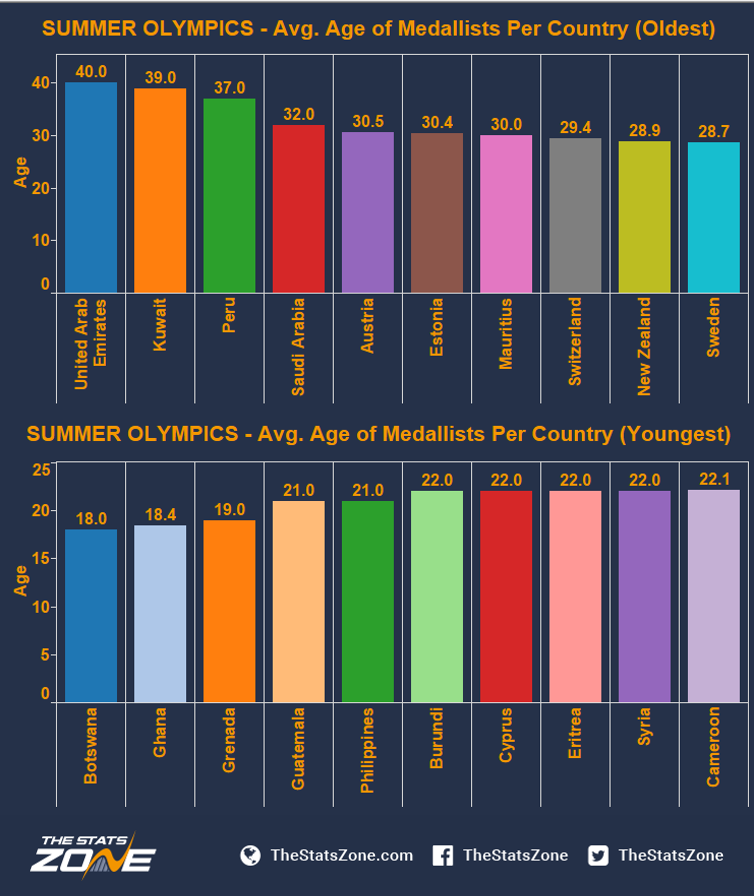 To conclude, we have looked at the age of medallists between 1992 and 2012 in the Summer Olympics. The study shows that women on average are one year younger than male medallists. When considering the average age per medallist, split by discipline, horse related events show the highest average age of a medallist. On the other side of the spectrum, gymnastics has the youngest winning medallists. When we looked at all athletes, we identified that the widest range between two medallists was 48 years and for gold medals this range was 39 years. Comparing the two biggest sports in the Olympics, on average Swimming sees younger medallists than Athletics. Finally, we have shown the countries that have produced the youngest and oldest medallists. Whilst some countries stood out, unfortunately the sample size makes it hard to draw any clear conclusions from this part of the study.