round. Boehringer becomes the first European to be drafted and he signed his contract with the Vikings yesterday.###>

Over in Europe, we are gearing up for the start of Euro 2016 which kicks off on 10th

June. Football to us Europeans is known as Soccer to our friends across the pond. But it is becoming something of a norm to now watch American Football when Sunday afternoons in autumn roll around. ###>

This is due in part to the coverage on Sky Sports, but in addition is the NFL International Series which has showcased live NFL games from Wembley Stadium since 2007. This has increased the popularity of the sport in the UK and Europe.

Seemingly the increased exposure has led many Europeans to take up the sport and for the select few, the opportunity to join the ever growing list of NFL players, past and present, to represent their country in the biggest sport in America.

With the NFL draft rapidly upon us, TSZ decided to take a look into the impact players with European backgrounds have made on the NFL and a handful of candidates that could be picked up in free agency following the draft.

Firstly, we decided to take a look at which European countries have produced players (past and present) to play in the National Football League. As you can see from the table below, Germany is the clear leader to date with 79 players. Second is England with 36, and then Italy with 20. In total, 262 players from Europe have been selected to play in the NFL since its inception in 1920.

The majority of the players have been selected following their attendance at American Universities and Colleges which is the natural route that most players are recruited from into the NFL. The College football season is as popular as the NFL. With 8 of the top 10 University/College stadiums capable of holding over 100,000 fans, with Michigan top at 109,901, it clearly demonstrates the popularity of the sport at this level, and of course the wide coverage of these games by the TV networks is making household names of these players before they even get to the NFL draft.

This number increased by one this last week with the emergence of German powerhouse, Moritz Boehringer. This 6’ 4½” receiver caused quite a buzz at the NFL scouting combine - a week long process where college players perform physical and mental tests under the watchful eye of coaches, general managers and scouts. The Vikings were suitably impressed.

What is unusual about Boehringer is that he has not come to the draft via the American collegiate system and was in fact studying in his native Germany and plying his trade playing in the German Football League.

Unlike Boehringer, who entered the NFL draft, another member of the German Football League has managed to get signed by an NFL team this offseason before the draft even took place. French wide receiver, Anthony Dable has impressed the New York Giants and has signed to play in the “Big Apple”. He caught 145 passes for nearly 2,500 yards and 32 touchdowns the past two seasons in Germany.

From table 1 above, you may be asking why Germany has the largest number of players who have played in the NFL. The success of the German Football League comes despite the relative failure of the World League of American Football (WLAF) later renamed the NFL Europe League. This was a professional American football league which operated between 1991 and 2007. It was backed by the NFL. Each season culminated with the World Bowl.

The WLAF was founded in 1991 to serve as a type of spring league. Seven of the ten teams were based in North America and the other three in Europe (London, Barcelona and Frankfurt). This format lasted for two seasons, with no league in 1993–94. The WLAF returned in 1995 with six teams, all in Europe, and in 1998 the league was rebranded as the NFL Europe League or NFL Europe, until 2006. For the league's last season, 2007, it officially changed its name to NFL Europa.

The league's squads were predominantly assigned by NFL teams, who wanted these younger, developmental players to get additional game experience and coaching. The NFL assumed the expenses of players and coaches living in Europe. The European six-team format was maintained for 12 seasons, from 1995–2007, but by 2007 five teams were based in Germany. On 29 June 2007, the NFL announced the end of the NFL Europe League. However, the game remained strong in Germany, and as a result this reflects their success in getting players into the NFL. Current NFL players Sebastian Vollmer and Kasim Edebali both played in the league before entering the NFL and have made a big difference – Vollmer in particular.

This leads us to look at the current crop of active European NFL players and where they learned the game. 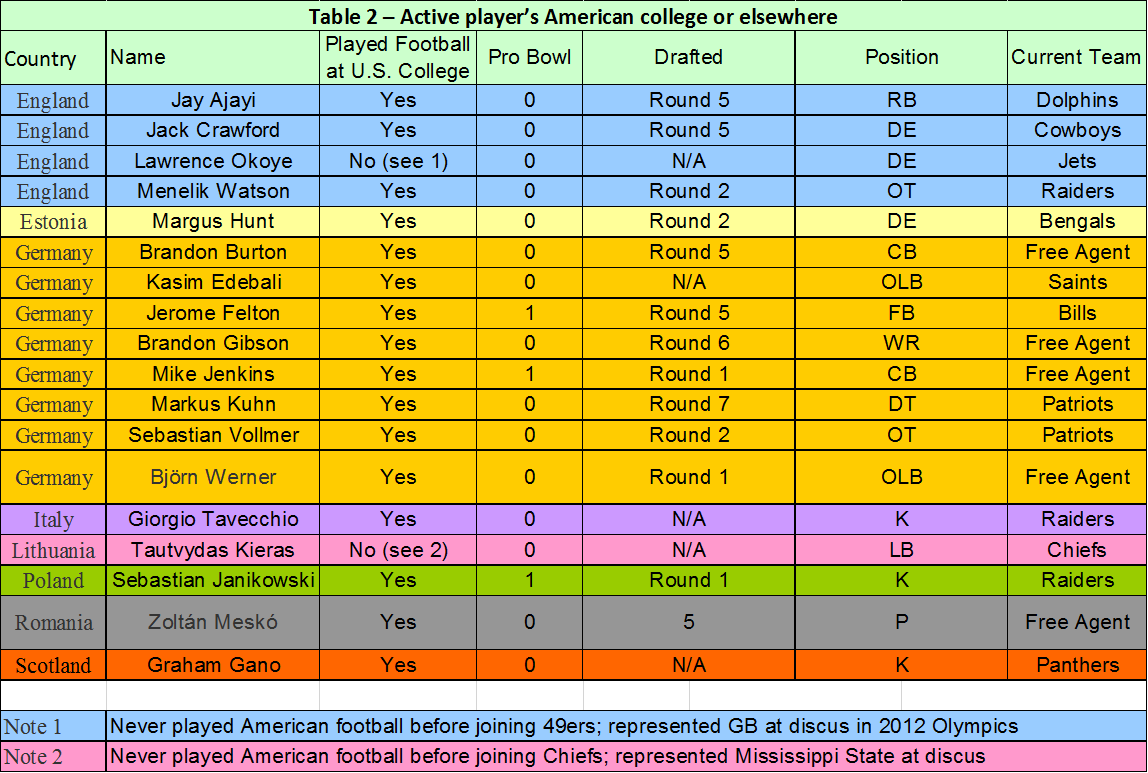 As you can see, only two active NFL players did not come through the American University/College route. One of these players is Lawrence Okoye from England who previously competed for Great Britain at the London Olympics in 2012 in the discus. He is one of two NFL players that competed in the discus before beginning their NFL careers, the other being Tautvydas Kieras from Lithuania.

Of the 18 active players found, three were selected in the first round of the draft and three players have made appearances at the Pro Bowl - a match between the best players from the NFL & AFL divisions selected by coaches, the players themselves and the fans due to outstanding play, which takes place a week before the Super Bowl.

However, we are yet to see a modern day European player really take the NFL by storm the way Dirk Nowitzki or Tony Parker have done in the NBA. These players can be described as legends of the game in their field with multiple titles and accolades.

The European presence is clear to see but the question is when will we regularly see European players gracing the first round of the draft? Will a time come where the National Football League will be on par with the NBA or NHL when it comes to the influx of European talent? It certainly seems that the NFL is now taking notice of overseas talent. Perhaps one of the players listed below are on the radar of the scouts looking around Europe for new talent. It will be interesting to see whether any can follow in Boehringer's footsteps. 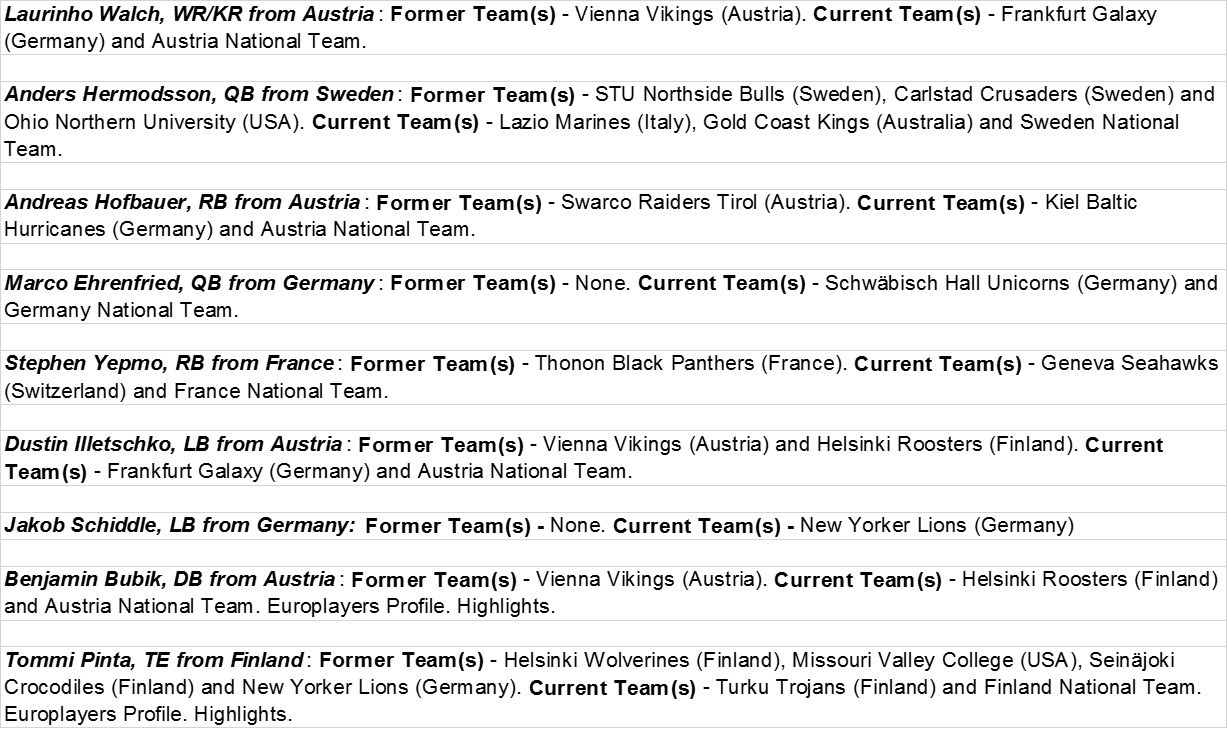