MLS Away Days: How do MLS teams navigate the long away journeys?

We have analysed the results from the last 3 regular seasons of the MLS (2013, 2014 and 2015) in order to investigate how factors such as distance travelled to away games and Champions League matches effect results. We have applied the patterns we have found to the 2016 fixtures to see which of the MLS teams have been either advantaged or disadvantaged by the 2016 schedule.

Firstly, let’s take a look at the overall breakdown of results in the MLS over the last three years. 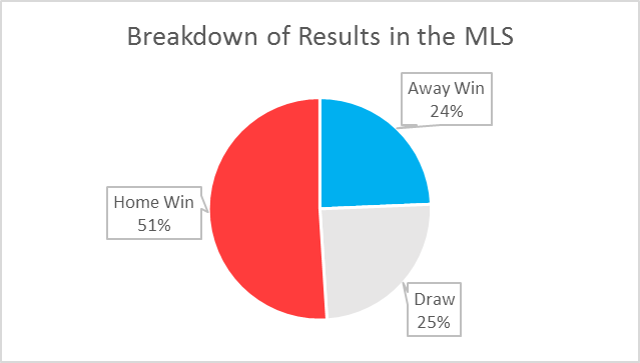 Unsurprisingly, home wins are by far the most common result with just over half of all matches ending in a win for the home team. Draws and away wins are fairly evenly distributed at 24% and 25% respectively.

Effect of Distance on Results

The following scatter graph shows the away points won plotted against the distance travelled by the away team. 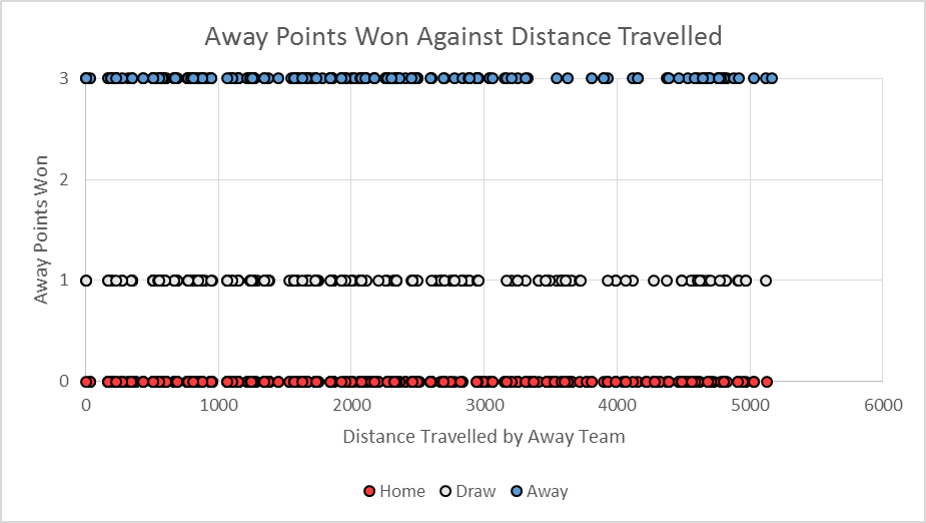 If there was a strong correlation between the distance travelled and the points won by the away team, we would expect to see a bigger concentration of the blue ‘away wins’ towards the left hand side of the graph where distances are less.

However, in actual fact, it appears the result distribution is fairly consistent regardless of the distance travelled with the exception of a much smaller concentration of away wins when the distance is close to 4000km.

This is further illustrated in the following graph which shows how the result breakdown changes at different distances. 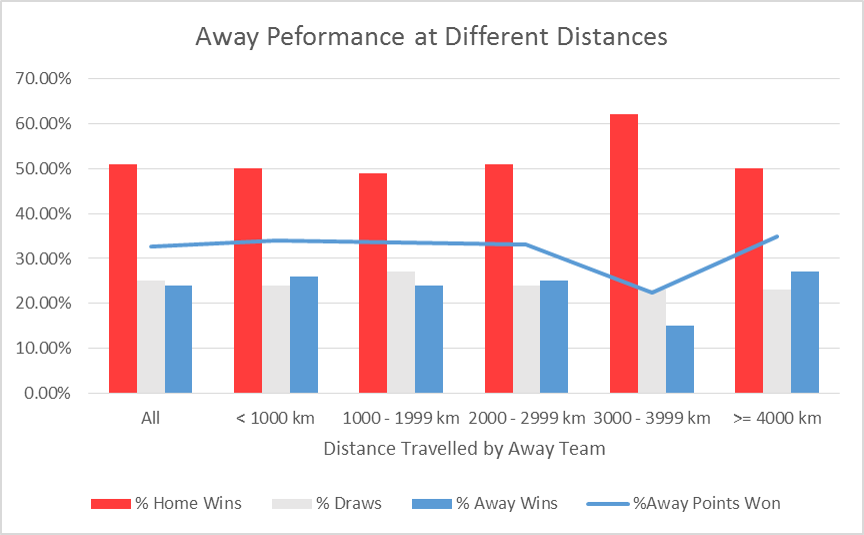 Results are very consistent with the exception of matches where the away team travels between 3,000 – 4,000km at which point the number of home wins increases significantly at the expense of away wins. Interestingly, for distances over 4,000 the result distribution returns to normal.

If we apply this finding to the 2016 fixtures we can see which teams are likely to be most effected by this dip in away performance at this distance. Due to the unbalanced nature of the MLS we can see that Columbus are playing 3 away games where they are travelling between 3,000 – 4,000 km but only 1 home game in which the opposition is making a similar journey. Conversely, FC Dallas have benefited most from the 2016 fixtures in this regard.

In addition to looking at how the distance effects the result breakdown, we wanted to examine whether the timing of the match had any impact. You can see from the following chart there is a drop (of 5%) in the number of away wins for matches taking place in midweek rather than the usual Saturday and Sunday games. 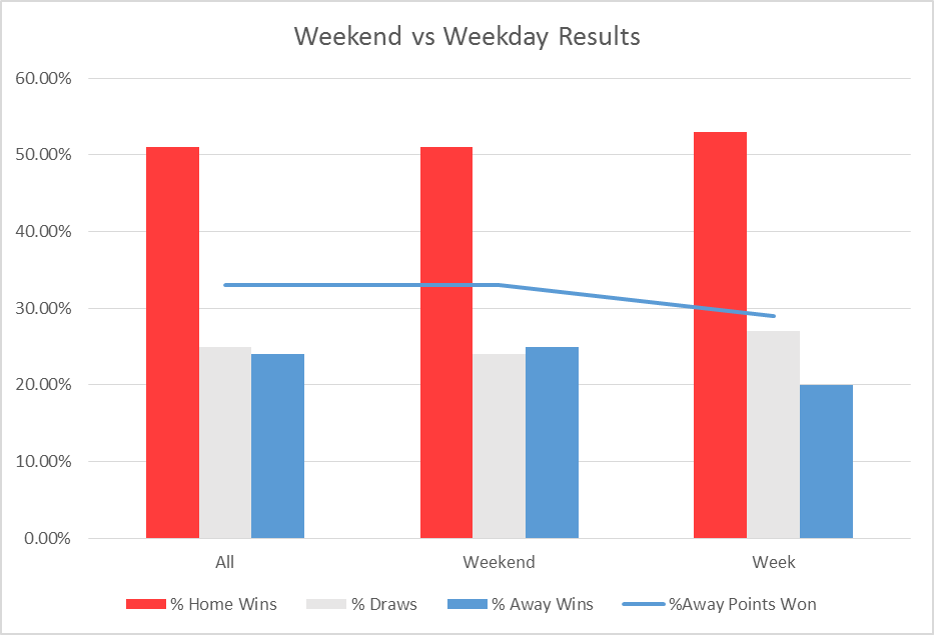 There is quite a large variation in the number of weekend versus midweek games that each team plays. If we look at the 2016 fixtures we can see which teams might be most affected by the dip in away points won in midweek games. 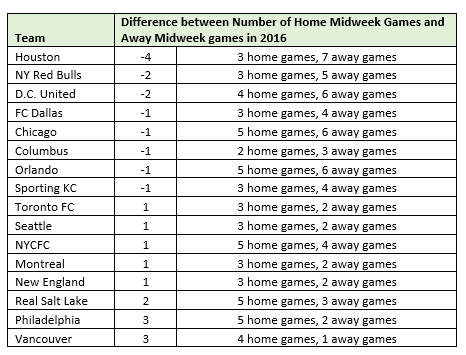 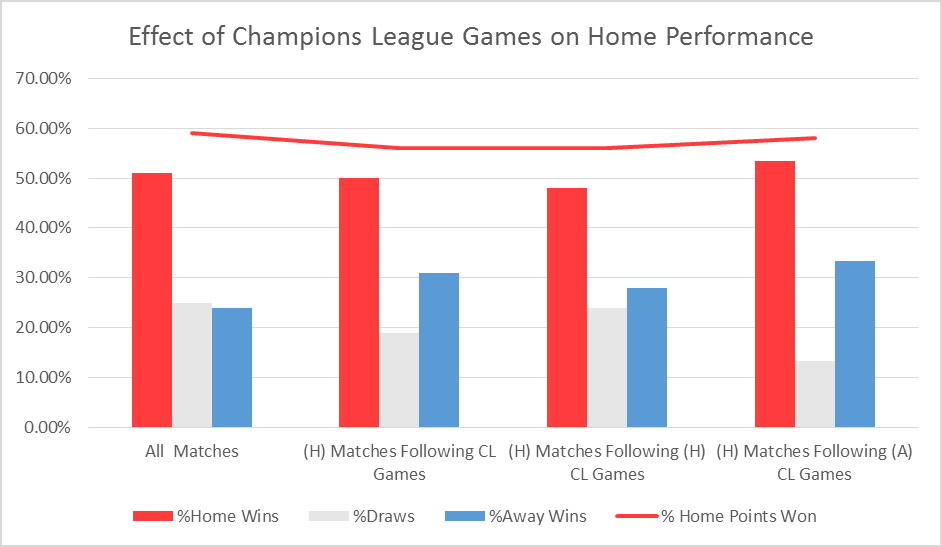 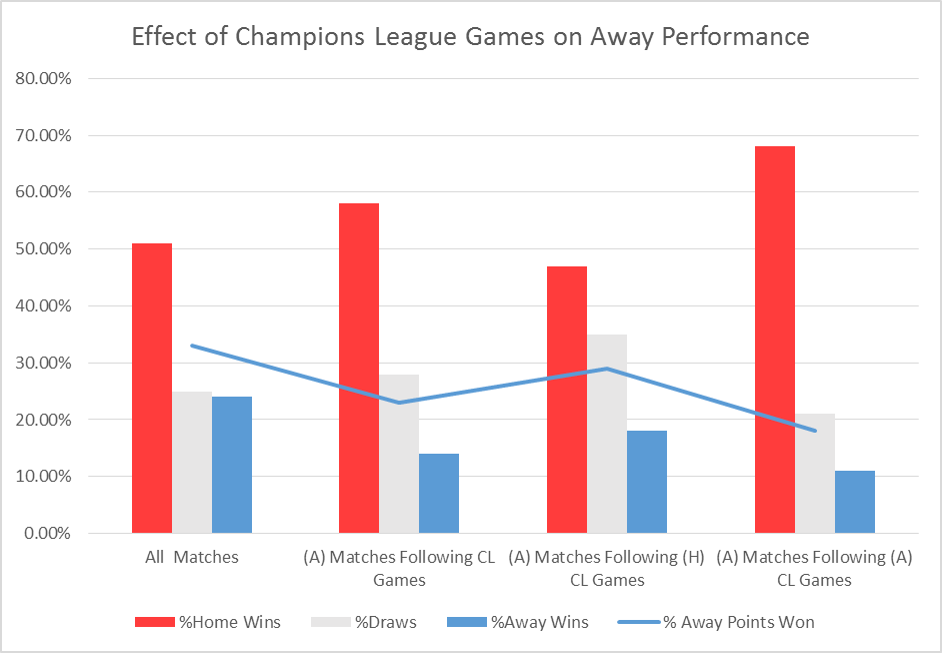 The Champions League draw for the 2016-17 season has not been made yet, but when the draw takes place on 30th May 2016, the teams that have qualified (as shown in the table below) should pay close attention to the fixtures. 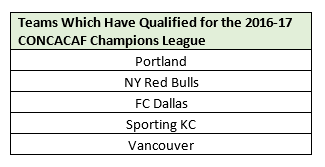 Any away matches after their Champions League fixtures should be treated with care - especially if they are travelling 3,500 km on a weekday!