Messi vs. Ronaldo: Who Has The Greatest Impact At International Level?

Puskas vs. Di Stefano, Pele vs. Maradona, Messi vs. Ronaldo. For decades, football has spawned many passionate debates worldwide, and will no doubt continue to divide opinions for decades to come. For the current generation of football enthusiasts, they have been blessed with witnessing arguably two of the game’s greatest ever players competing week in, week out, at the same time. As football’s premier individual award – the Ballon d’Or – released its shortlist in October (further nominee insight can be found here: http://www.thestatszone.com/articles/a-breakdown-of-the-ballon-dor-2016-nominees), both Messi and Ronaldo are hotly tipped to be victorious once more. Despite continuous praise at club level, throughout their careers both players have received criticism for not replicating their impressive form at international level. TSZ has decided to focus on their exploits at international level by examining how important Messi and Ronaldo are to their respective national teams, and how their international records compare on the world stage.

First of all let’s take a look at the obvious statistics when comparing these two giants of the game: 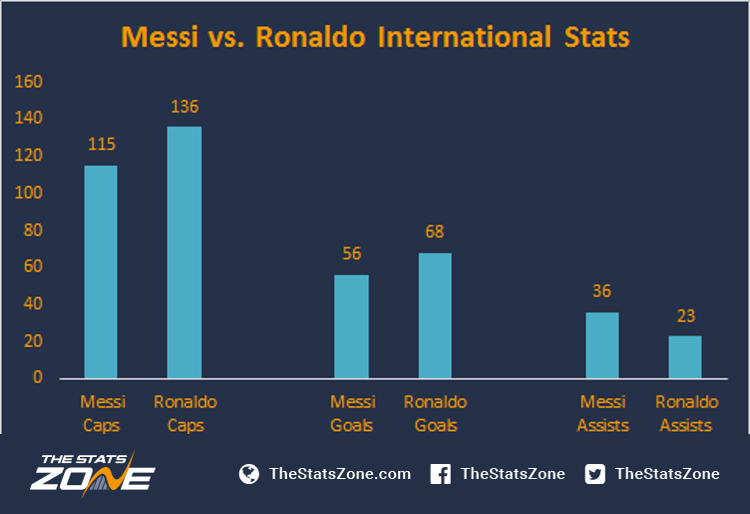 And what if we divide that up into friendly and competitive matches? 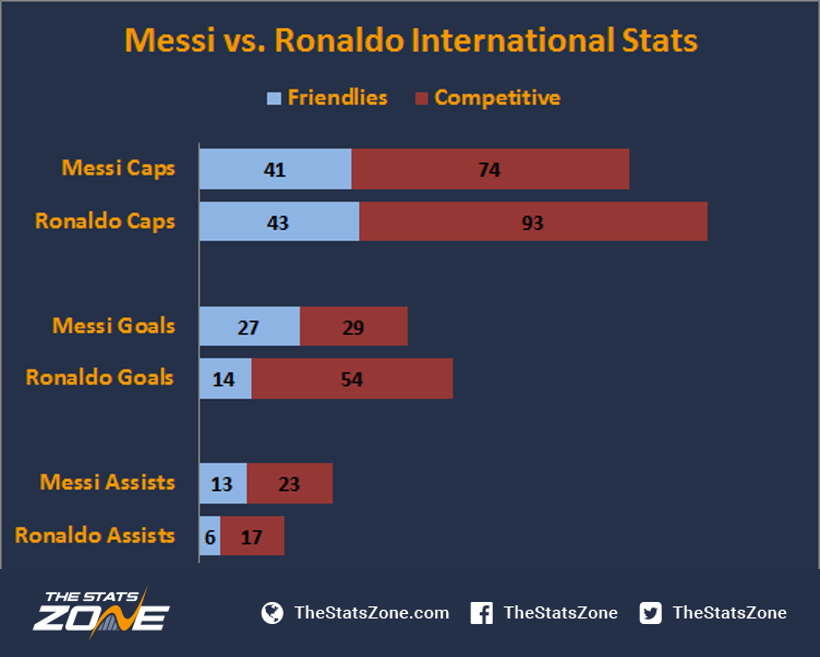 Despite Cristiano Ronaldo being capped on more occasions than Messi, they both share a similar percentage of appearances between friendlies and competitive games. However, although they are both the all-time leading goal scorer for their nations, Ronaldo has a significantly higher percentage of goals in competitive games (79%) than Messi (52%). A similar, yet less significant pattern also emerges when comparing their assists record: 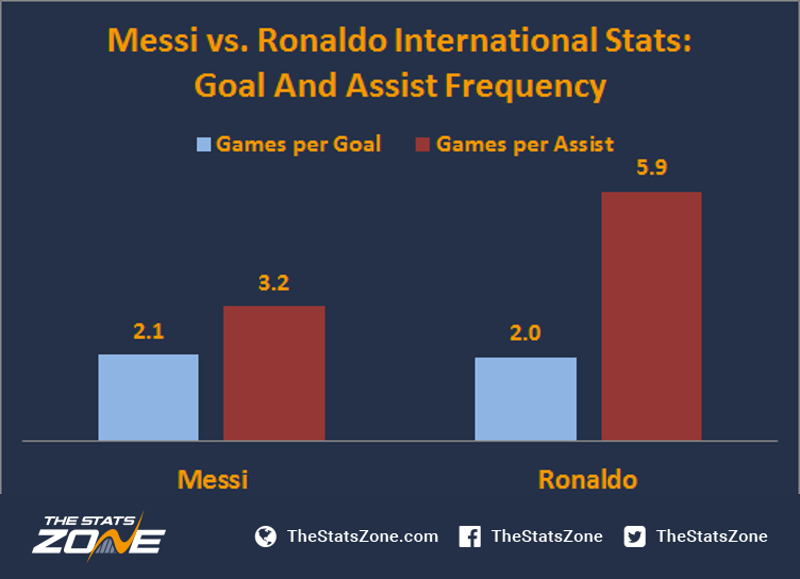 In terms of game ratios, both players average a goal approximately every 2 international games. However, Messi has a significantly better assist ratio, averaging an assist every 3.2 games, compared to Ronaldo every 5.9 games.

So, do Messi’s stats look more impressive due to far more of this goals and assists occurring during friendlies, where there is less pressure and there is a greater chance to play against significantly weaker opposition? 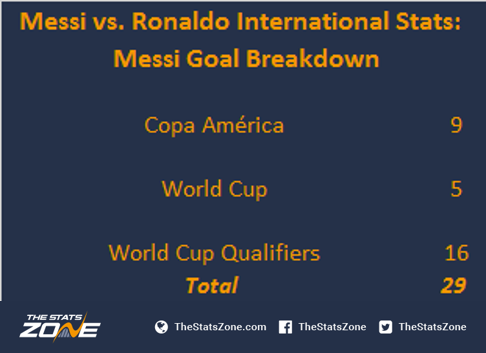 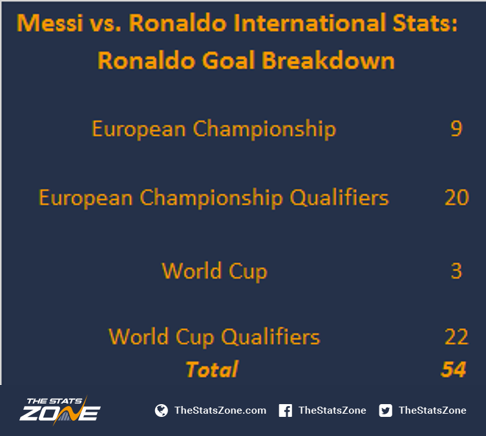 Messi actually has a greater goal scoring record (14) at major tournaments than Ronaldo (12), so when compared with their competitive goal scoring records, Messi has scored 48% of his goals at a major tournament, whereas Ronaldo has only scored 22%. This means that 78% of Ronaldo’s competitive goals have come during qualification, which some Messi fans will point to in order to illustrate the fact Messi faces tougher opposition during qualification campaigns than Ronaldo does.

On 10 occasions, Messi has scored the vital deciding/winning goal, whereas Portugal have relied on Ronaldo 18 times. This means that 13.2% of Ronaldo’s international appearances have resulted in him scoring a game deciding goal, compared to Messi’s 8.7%. Both players share the accolade of four hat-tricks each at international level.

To further understand the impact these two players have on their respective nations, we next need to look at their major tournament progress: 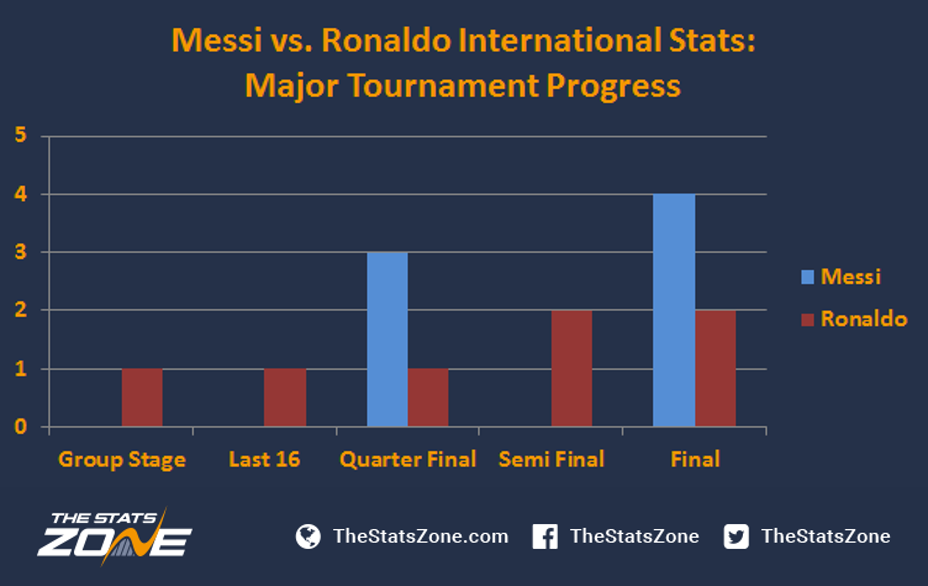 Messi has reached a major international tournament final on four occasions, where interestingly he has yet to finish on the winning team. In comparison, Ronaldo and Portugal have had a somewhat mixed bag of tournament success. Most notably, Ronaldo has reached a final twice, where he has tasted both success (2016) and defeat (2004). It must also be noted that during the Euro 2016 final against France, where Portugal surprisingly went on to secure the trophy, Ronaldo went off injured after only 25 minutes so his impact in that game, despite his best efforts from the touchline, was negligible. Having said that, he did play a significant role in his country reaching that stage of the competition.

Having seen Portugal triumph in Euro 2016 in spite of losing their best player after 25 minutes of the final begs the question; how well do Portugal and Argentina cope without their star men? 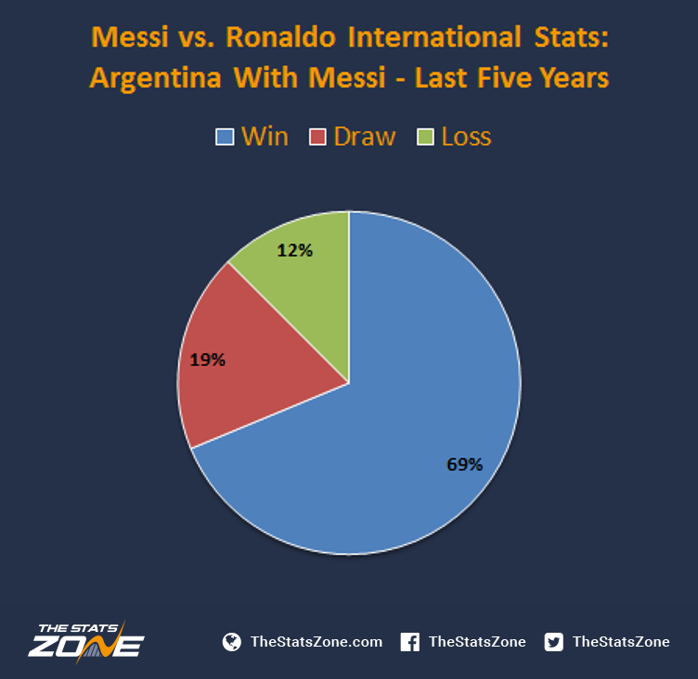 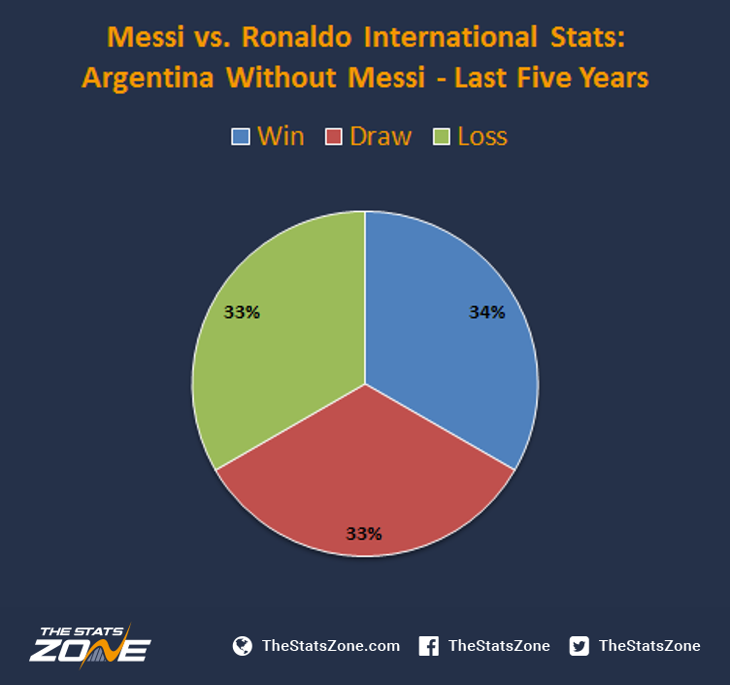 In the last five years, Argentina’s record with Messi is significantly better than their record without him. This includes a disastrous opening seven games to their 2018 World Cup qualifying campaign, where they could only manage one solitary victory. Without Messi, their win, draw and loss record is evenly spread, whereas when he does play, the percentage of wins double. 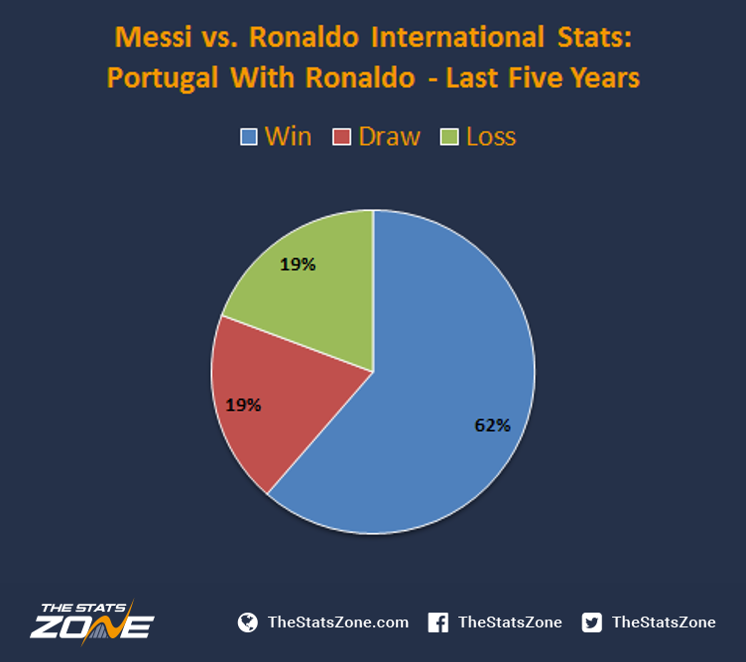 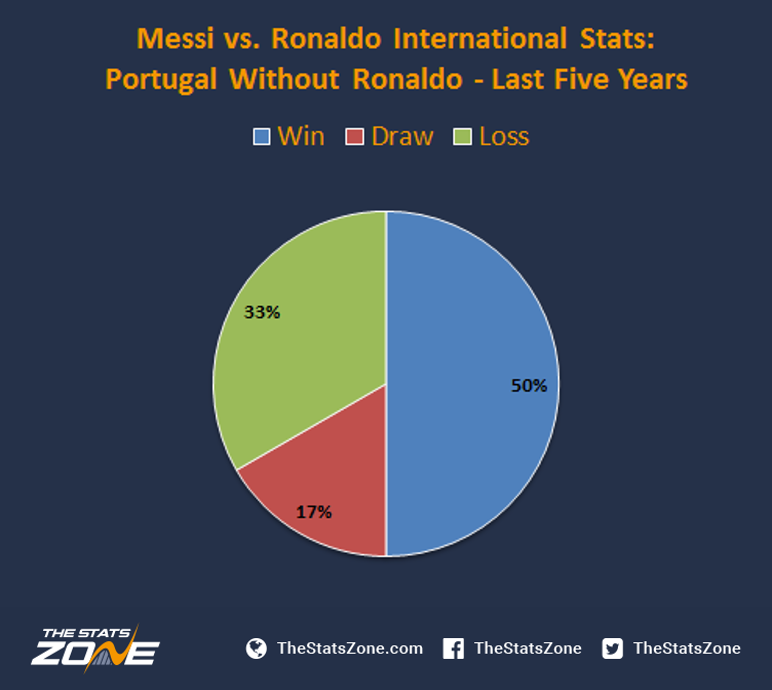 Similarly, Portugal’s record with Ronaldo is greater than without him. Despite only a 12% difference in win rate, there is a significant increase in losses when Ronaldo does not play.

When comparing goals for their individual nations, both players have contributed towards a significant percentage of total goals. Since 2011, Ronaldo has scored two more international goals than Messi, which interestingly is the exact amount of goals he scored against Latvia, only last Sunday.

Whether you side with Messi or Ronaldo, no one can argue how influential both of these great players are to their national teams. Despite scoring and creating chances against significantly weaker opposition, both players have shown their worth during major tournaments. As records continue to fall at the hands of these two legends in the making, the comparisons will no doubt continue to rumble on for years to come. One thing that is certain however, is just how lucky we are to be able to sit back and enjoy these magicians light up any football pitch.