Longest Winning Streaks In European Football – Where Do TNS Stand?

It isn’t often that Welsh domestic football falls under the sporting spotlight, but the exploits of The New Saints (TNS) have been hitting the headlines lately and making people sit up and take notice; Craig Harrison’s men have won 21 league games in a row this season (22 if you include last season), scoring 74 goals in the process whilst only conceding 11. This recently eclipsed the previous Welsh record set by Bangor City of 15 consecutive wins back in 2010-11, and they now have their sights set on the British record of 25 league wins in a row achieved by Martin O’Neil’s Celtic in 2003/04. Chairman Mike Harris has stated that the club’s ambition is to get into the group stages of either the Champions league or Europa league (a feat League of Ireland side Dundalk FC have achieved this season), and in the process “demonstrating to the world that there is actually a way of producing football teams of high quality on a very restricted budget”. 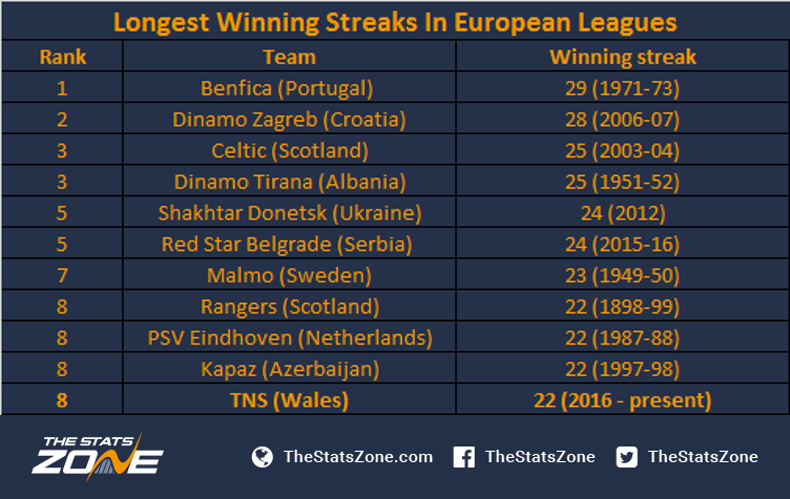 To put the current achievements of TNS into context, they are currently joint eighth on the list of all-time longest winning streaks in top flight European leagues. They are now just three victories away from the British record; however, as all good manger’s preach, we are sure Craig Harrison will be echoing the saying “one game at a time”.

The best league winning run in Europe goes to Portuguese giants Benfica, who in the years 1971-73 won an incredible 29 consecutive league games. They are closely followed by Dinamo Zagreb – a team boasting Vedran Corluka and Luka Modric – with 28 wins back in 2006-07.

As a side note, there are reports of the Sparta Prague side of 1919-23 claiming winning streaks of 51 and 60 games, but the unreliable Czechoslovakian records during this period casts doubt over the validity of these claims.

Now we shall shift our focus on to the top five European Leagues: 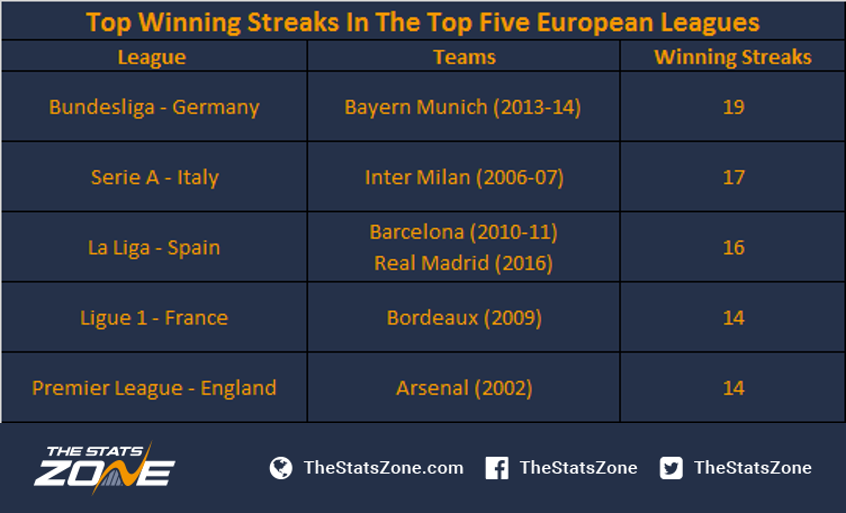 We see Arsenal’s ‘Invincibles’ with the English record, so let’s take a look at the top five streaks in the Premier League era:

TNS may have already cemented themselves in the Welsh history books but it’s a little early to be glancing up at Celtic’s British record just yet. After all, the Welsh side’s manager Craig Harrison won’t want to make the same mistake that Dinamo Zagreb boss Branko Ivankovic made after his side secured a 28th consecutive league win in 2007;

“We have a great side. We are going to win a 29th game in a row and equal Benfica's record”

A glance up at the all-time-list will tell you all you need to know about the price of complacency!