With Leicester showing no signs of being dislodged at the top of the Premier League, it seems even the bookies have finally started taking the unlikely challenge seriously, with the Foxes being made title favorites across multiple outlets.

Many pundits are suggesting that as Leicester has no domestic or European commitments, their reduced schedule could be the biggest advantage going in their pursuit of glory. While the unlikely table toppers have only 9 games left to play this season, the remaining top 4 of Tottenham, Manchester City and Arsenal could potentially play another 16, 16 and 20 times respectively (including potential replays – stats correct as of 8th March). 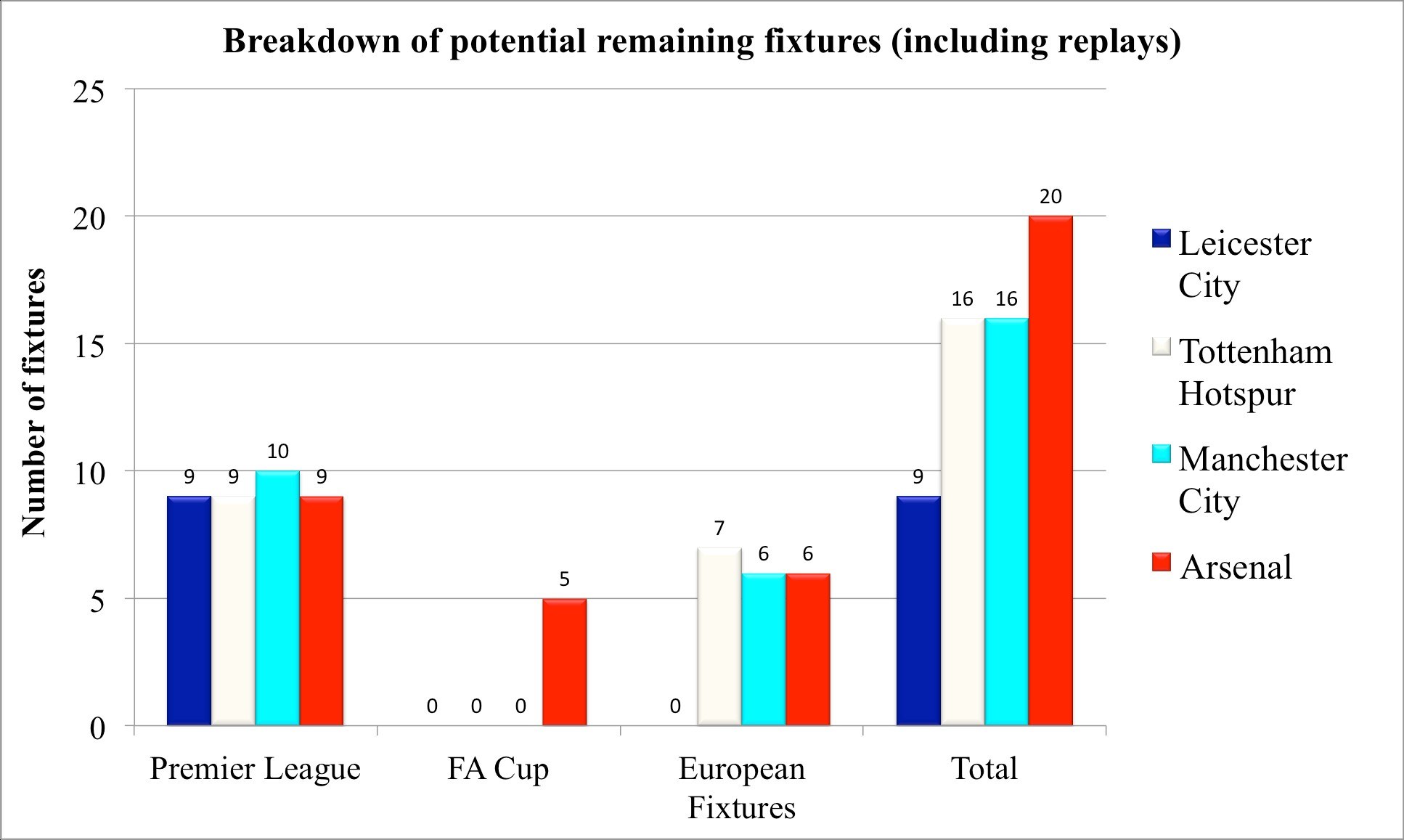 I have decided to delve into the stats, to determine what affect, if any, being involved in the latter stages of cup competitions has had on the form of the chasing pack.

As clubs that are traditionally involved in Europe and the latter stages of both domestic cups, having additional fixtures to the remaining Premier league schedule is commonplace for Spurs, Manchester City and Arsenal. Indeed these clubs are built to sustain an assault on multiple fronts. I have chosen to analyse the stats over the last 5 seasons, in order to determine how each of these three sides may cope with the extra fixtures. This was done by taking the average points per game (PPG) over the final 9 fixtures and comparing with the previous 29. 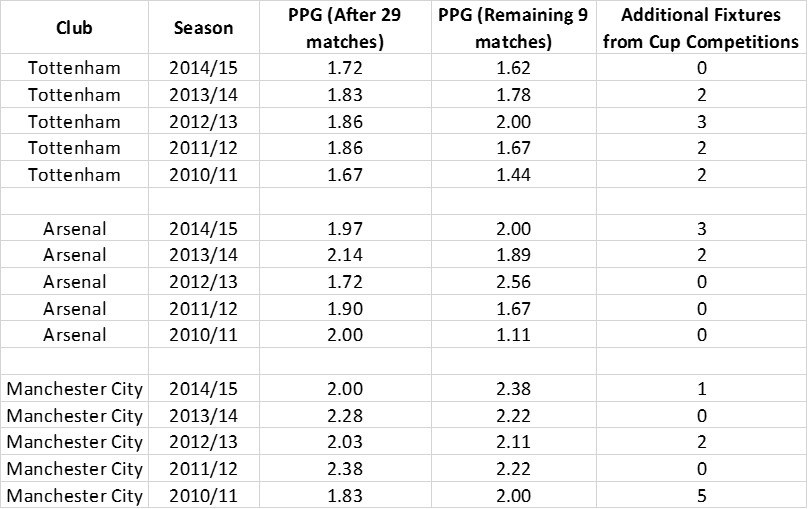 Currently occupying 2nd spot, this season represents the best chance Spurs have had to win a championship, since the legendary 1960/61 team. However, from the stats it appears Spurs fans have the biggest reason to be fearful, as The Lilywhites have suffered a dip in form over the last 9 fixtures in 4 of the past 5 seasons. Also concerning is that this dip has occurred regardless of whether Tottenham have had additional fixtures to play or not.

More positively the lone season of Tottenham’s improved form (2012/13) was the one in which they had the most additional fixtures to play. It is also this season that saw them record their highest PPG over the last 9 fixtures and progress to the quarterfinals of the Europa League. With Spurs still involved this competition, their fans will be hoping for a similar impact on their domestic form. Their improved form also seems to be at odds with the theory of fewer fixtures being an advantage and in particular, those people who claim the Europa league is a distraction. Instead ammunition is given to the notion that if a team can get on a winning cup run, this mentality will spill over into their league form.

These conflicting statistics couldn’t be more apparent than when we look at Arsenal’s form over the past five seasons. For both the 2014/15 and 2013/14 season, The Gunners were knocked out of the Champions League early, but went on to win the FA Cup. While last year’s statistics indicate that the cup run had a positive influence on the Gunners end of season form, with an average PPG increase of 0.03, this couldn’t be more different than the 2013/14 season, which witnessed a decrease in form and a loss of 0.25 PPG, as their title challenge faltered.

With the recent talk of Arsenal not being mentally tough enough to sustain a title challenge a more interesting comparison on how Arsenal may perform over the final 9 fixtures can be gained through comparing The Gunners form in the 2012/13 and 2010/11 seasons. These seasons saw their largest increase (2012/13) and decrease (2010/11) in form over the final 9 games. This also occurred despite having no additional fixtures to play in either season. In the 2012/13 season the Gunners occupied 5th after 29 games, 4 points adrift of Tottenham in 4th. Their dramatic improvement in form allowed them to climb back into the top 4 and clinch a Champions League spot. However, back in 2010/11 the Gunners were occupying 2nd spot with 9 games to go, 5 points back from top. As shown, their form completely fell away over the final 9 games, averaging 0.89 PPG less, as they limped to a 4th place finish. These stats potentially back up the suggestion that Arsenal are not mentally tough enough to handle the pressure of challenging for a championship.

Over the last few seasons Manchester City have really established themselves as one of the powerhouses of English football. A look at the stats backs this up with the Sky Blues averaging a minimum 2 PPG over the last 9 games in each of the past 5 seasons. This suggests an ability to maintain their form, regardless of whether they have additional fixtures to play or not. A look at the 2010/11 season confirms this assertion. While their PPG of 1.84 after 29 games is far below the other 4 seasons, their form does not drop off over the remaining 9 fixtures. In fact, despite having an additional 5 fixtures to play from cup competitions their form dramatically improves, which again seems at odds with the theory of fewer fixtures being an advantage.

How Have Others Fared?

Dating back to the 2006/07 season, the quartet of Manchester City, Manchester United, Arsenal and Chelsea have had a strangle hold over the top 4 places, at both 9 games to go and the end of the season. 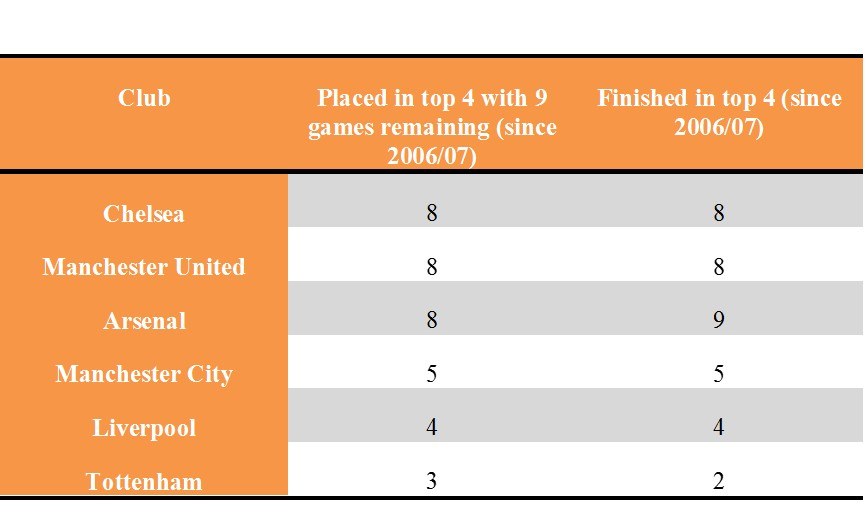 Occasionally clubs with larger squads and spending power (Liverpool and Tottenham) have been able to break into this monopoly, but very rarely has a club without these benefits been residing in the top 4 with 9 games to go, or managed to finish there at the end of the season. Over the last decade, of clubs similar in stature to Leicester, only Southampton last season (2014/15), Aston Villa in 2008/09, and Everton in 2007/08 were placed within touching distance of the top 4 with 9 games to go. I have looked into how Southampton, Villa and Everton fared over those last 9 fixtures.

As the stats show, getting close to the top 4 at this point of the season is one thing, but maintaining form and finishing in the Champions League spots is another. Of these 3 clubs only Everton were still involved in cup competitions at this point in the season. Despite having a chance at the top 4, the Toffees imploded down the stretch, averaging a massive 0.93 PPG less over the final 9 games. While it is apparent that the traditional top 4 clubs have the squad depth and experience to contest multiple competitions, the same may not be true for clubs without the additional resources and hence the extra fixtures could be a reason for their drop in form. This in turn suggests it is advantageous for the Foxes to only have the Premier League to focus on.

At least it does until we come to Aston Villa and Southampton, whose remaining schedule is the most comparable to Leicester’s. Like Leicester, the Villains and Saints had no additional fixtures remaining when they attempted to gatecrash the top 4. This is perhaps the most worrying statistic for Leicester as over the final 9 fixtures the form of both teams suffered greatly, with the Saints averaging 0.61 PPG less whilst stumbling to a 7th

What does this mean for Leicester’s chances?

So what does all this mean for Leicester’s chances and can we expect them to hold off the inevitable push from the teams below? Having consulted the stats it seems apparent that it is unlikely all the chasing teams will falter due to their increased fixture list. Moreover, for as many seasons where the additional fixtures have resulted in a loss of form, there are just as many in which an extended cup run has had a positive influence on a team’s Premier League form.

As previously discussed, the top clubs are built to challenge on multiple fronts, meaning fitness can be maintained via rotation and injuries to first team players have a reduced impact. They also have the advantage of having been in similar situations before and therefore, in theory, should be handle the extra pressure each game takes on towards the end of the season.

In fact being able to handle the pressure seems to be the overriding factor in determining a clubs outcome. In previous seasons, when teams of similar stature to Leicester had the opportunity to break into the top 4, they instead severely faltered down the stretch, regardless of whether they only had the Premier League to focus on or not. However, this season is unique. We are not talking about a club that is looking to scrape into the top 4, but one whose aspirations are far higher. This is a team that has a 5-point margin at the top of the league. While many pundits have been predicting all season that the pressure will get to the Foxes they instead keep churning out the results, taking 7 points from their last 3 fixtures. In fact it appears that the challengers are the ones struggling to handle the pressure with Spurs only gathering 4 points from the last 9 available, Arsenal 1 point and Manchester City 3 points.

In the end though, regardless of whether Leicester wins the Premier League, finish in the top 4, or fall away completely, they have contributed to a hugely compelling season. But having defied the odds so far, can the Foxes go all the way? Would you bet against them? It seems, for the time being at least, the bookies are not.