Just how up for the FA Cup are the big teams in English football?

With the FA Cup final between Manchester United and Crystal Palace taking place tomorrow, the debate will begin again in earnest about the future of the grandest and most famous domestic cup competition in the world. Indeed, many will point to the fact that the competition has lost it shine, that it no longer holds the same importance as it once did. These detractors often argue that the bigger and more successful clubs seem to prioritise the Champions League and the Premier League with the FA Cup final no longer representing the pinnacle of the season for many clubs, players, and executives. Indeed in recent years, many have suggested that the appearance of teams such as Wigan, Hull, and Aston Villa in cup finals – rather than teams challenging for the title – can be seen as some sort of confirmation of a sea change in attitude towards the cup. But do the stats back up this belief that the bigger clubs, the teams competing at the top of the league, no longer have the same success in the cup as they once did? Is it the case that the teams higher up in the league no longer value the cup therefore opening up the field to the more unfancied teams? To test this theory, we have looked at the league positions of the finalists in the 1980’s,1990’s, 2000’s, and 2010’s to determine whether the dominant league teams were also the teams who were successful in the cup, and whether there has been a noticeable change in this regard.

We begin our examination by looking at the 1980’s. To many who argue the cup has now lost its shine, this decade should – if their argument follows – be a time where the most successful clubs in the league should also have been the most successful in the cup. Indeed, many commentators often hark back to this era as a time when every young boy dreamt of appearing in a cup final, almost as the pinnacle of the season rather than any form of afterthought following the conclusion of the league season. This position should have been reinforced by the fact the European Cup did not yet include teams other than the league champions and indeed, English clubs were banned entirely from all European competition for the second half of the decade following the Heysel disaster. As such, the clubs higher up in the league had less distractions and fewer competing competitions to “prioritise”.

However, when looking at the finalists from this decade, a different picture emerges. Indeed, right from West Ham’s appearance in the final (and subsequent victory) in 1980, a number of more “unfancied” teams reached the final. Including West Ham, three second tier clubs reached the final, and the overall average league position of the finalists at 8.4 does not point to a competition completely dominated by the more successful league sides. Even the 7.7 average position of the winners does not corroborate the argument that the teams winning or challenging for the league were more successful in the cup during this period than they are currently. This position is also demonstrated by examining the pre-eminent league side of that era Liverpool. Whilst they reached three finals in the 1980’s (winning two) this perhaps does not reflect their outstanding league record during the same decade in which they finished 1st or 2nd in 9 of the 10 seasons.

Moving on to the 1990’s, the first thing that stands out is that whilst the overall average position of the finalists has increased, the position of the winners has decreased by more than 1 position to 6.4. Could this be indicative of the big teams actually attaching more importance to the cup? Certainly the dominant side of the decade, Manchester United, enjoyed more success in the cup than Liverpool did in the 1980’s with 5 final appearances and 4 wins. With Arsenal also completing the “double” in 1998, there were 4 examples of the league winners also triumphing in the cup as apposed to just one in 1980’s. These successes were achieved despite the fact that the higher placed teams were back in Europe and therefore had more demands on their resources. However, the statistics do not show that the dominant league sides always dominated cup final appearances in this decade, with Sunderland appearing in 1992 when they finished the season 40th

in the English league structure which is the lowest league position in our study. Similarly, fellow north east team Middlesbrough got to the final in 1997 in a season in which they were relegated from the Premier League after finishing 19th, and 8 further teams (including 4 teams who went on to win the cup) also reached the final having finished 10th or lower. ###>###>

The years 2000 – 2009 show the biggest deviation in our study. Despite suggestions that they were no longer as interested in the cup, the statistics show the better placed league teams enjoyed considerably more success in the cup than in the previous two decades. The average position of the finalists dropped to 6.7 but the most notable difference was the average position of the winners, which halved to 3.2. Whilst only Arsenal in 2002 managed the double, the winners were dominated by the successful clubs of the decade with the tournament being won by either Liverpool, Manchester United, Chelsea, or Arsenal in every season apart from 2008, where 8th

placed Portsmouth triumphed. Even the finalists were far more predictable (based on the league table) than in the preceding decades with only Cardiff in 2008 and Millwall in 2004 reaching the final having finished lower than 9th in the league. Ironically given the pre-eminence of the successful league sides, both of these sides reached the final having finished mid table in the second tier of English football. The successes of the higher ranked teams came in conjunction with a very successful decade for English clubs in Europe which suggests that league, European, and cup success are not necessarily mutually exclusive. ###>###>

Moving onto the period from 2010 - 2015, the numbers appear to level out somewhat following the 2000’s. The average position of the winners and finalists has risen to 5.83 and 9.25 respectively. The winner’s average position is however heavily influenced by Wigan’s 2013 win when they finished 18th

. Other than this triumph of the underdog, the cup has been won by either Arsenal, Chelsea or Manchester City in each of the other seasons with Chelsea’s victory in 2012 when finishing 6th the lowest league position. However, despite the fact 5 out of the 6 cup wins have been by 3 of the games recent powerhouses, it is interesting to note that Chelsea are the only league winners to reach the final when they won the cup in 2010. Allied to the fact that Aston Villa, Hull City, and Portsmouth have all reached the final whilst battling relegation and the argument that the top performing league clubs may have taken their eye of the ball in the cup does seem to hold more credence than in the previous decade. Of course this year’s final continues the recent pattern with a powerhouse club Manchester United reaching the final whilst not quite living up to expectations in the league, playing against a side in Crystal Palace who have been much closer to the drop than any sort of league glory. Indeed, the final league positions of both clubs (5th for United and 15th for Palace) are very similar to both the 2014 and 2015 finals. Given United’s 5th finish, it would seem that a triumph for Van Gaal’s men would also fit perfectly with the average winner’s positions for this decade of 5.83. ###>###>###> 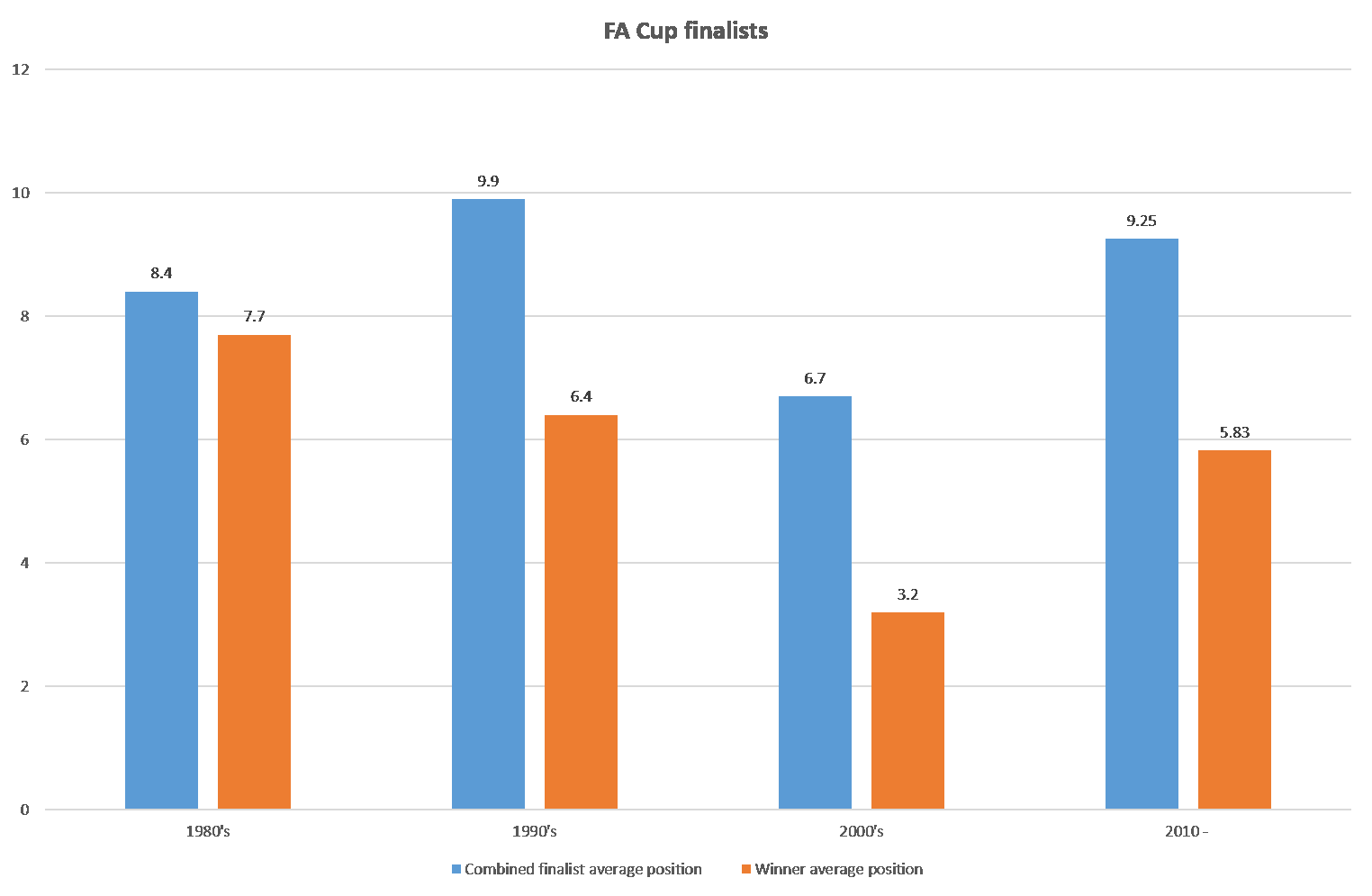 Overall the data makes interesting reading. The first thing to note is that the right from the 1980’s there have been “surprise” finalists, clubs such as West Ham in 1980, Sunderland in 1992, Cardiff in 2008 and Portsmouth in 2010. 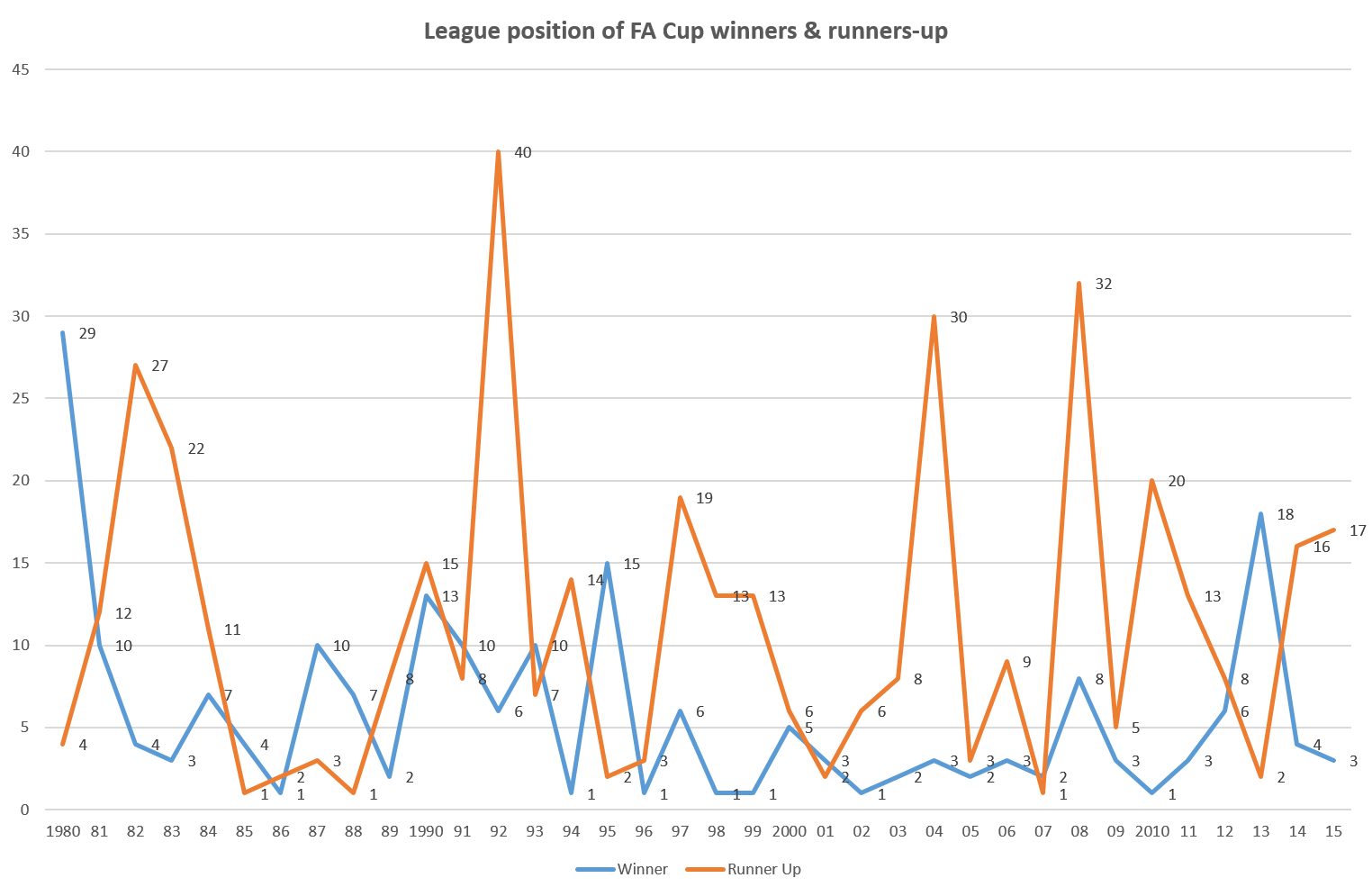 This is of course part of the magic of cup, the fact that fans of all clubs can dream of a cup win – or at least an appearance in the final – in a way that many – certainly before Leicester’s triumph this year – couldn’t in the league. However, the statistics do not support a theory that the dominant league sides no longer value the cup as they once did. Or else, even if they don’t value it is as highly, they still perform well, indeed often better than they did in the 1980’s and 1990’s. Certainly between 2000 – 2010, it appears that the “big” clubs, those challenging at the higher end of the league, actually appeared to have a vice like grip on the cup, perhaps threatening the old romantic notion that the cup could be won by anyone. 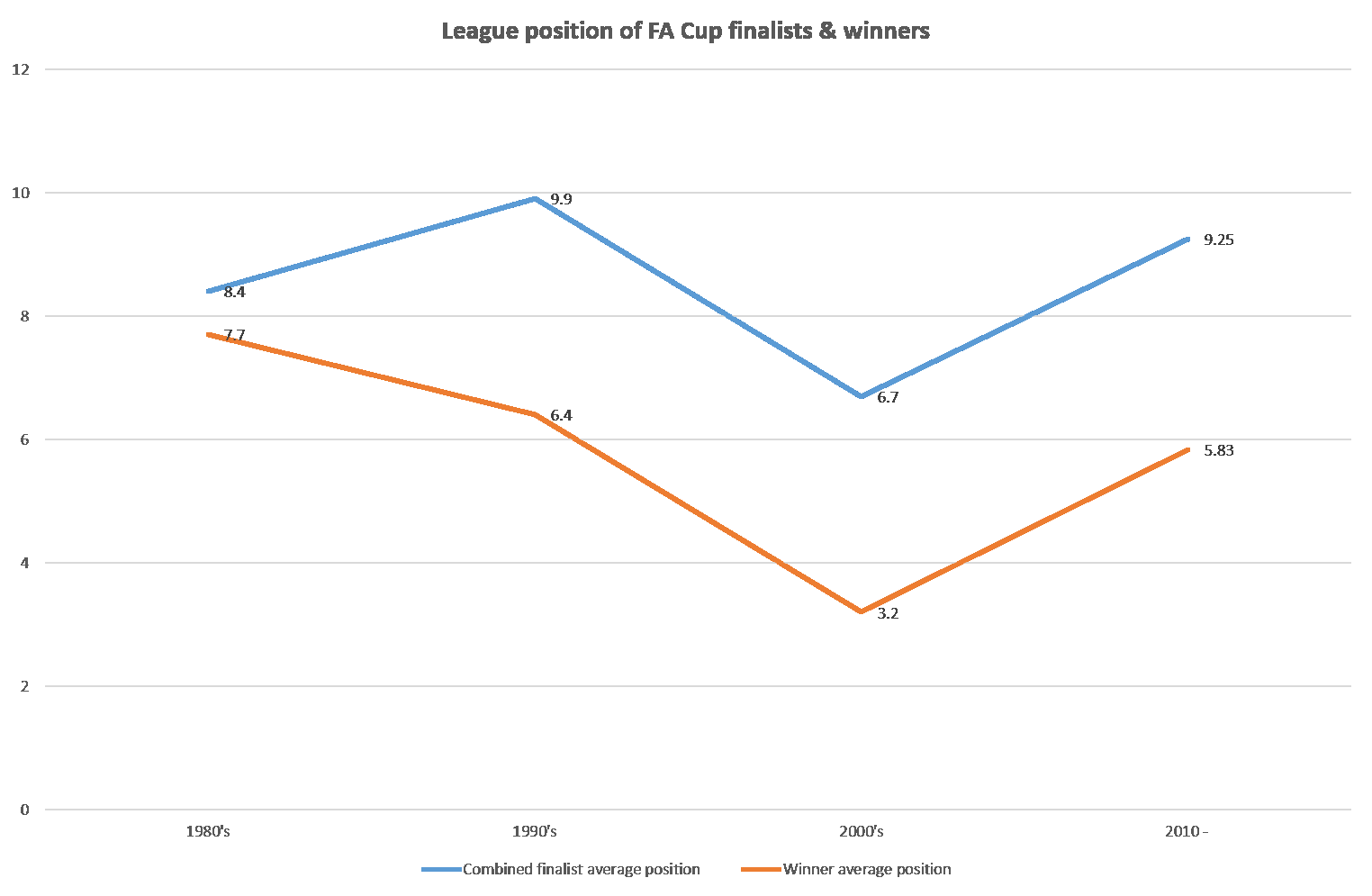 This domination may have been a reflection of the increased squad strength of the more powerful clubs who could afford to rest players and yet still succeed in the cup. Whilst this position has softened a little since 2010, the average league position of the winner is still lower than the 1980’s and 1990’s and Wigan aside, the winner has come from the group of recently successful “big” clubs. Indeed, in some ways, it is at least arguable that with increased competition at the top end of the league and in Europe, the cup is becoming more important to some of the traditional big names who are not actually winning leagues and European titles. This can be reflected by the fact that the 2012 win helped Chelsea rescue a relatively poor league campaign and the 2014 win is rumoured to have helped keep Arsene Wenger in a job after a sustained trophy-less period. This theory is also apparent in the coming final with Louis van Gaal desperate for victory after missing out on Champions League football. Like Wenger before him, victory in 2016 may even keep him in a job.

To conclude, the notion of the cup no longer holding the same gravitas to the bigger teams perhaps cannot be judged by solely focusing on the data. The bigger teams – with the notable exception of this season – have tended to become more powerful in recent decades and the emergence of Chelsea and Manchester City as real forces in the domestic game has meant that the league title has become more and more competitive between these select teams. This has in many ways imparted an increased importance to securing an alternative trophy and perhaps therefore explains the fact the winner has on average finished higher up the league than in the past without really seeing any league and cup “doubles”. However, this does not take into account the anecdotal evidence of teams resting players and fielding weakened teams. In this respect, this season’s competition has seen Manchester City fielding a reserve side against Chelsea, and Leicester doing likewise against Tottenham. This highlighted an apparent shared belief that their best chance of success in the Europe and the league respectively would be achieved by not embarking on a long cup run. It therefore appears that whilst the cup retains a real importance to traditionally successfully teams finishing in the top 6 of the league, it has perhaps become something of a “distraction” to those who are actually challenging for the Premier League title.