Why Is There Such An Advantage To Playing League Matches At Home In The MLS?

We’ve all heard the saying “there’s no place like home”, and it can easily be applied to football in most leagues all over the world. Teams tend to have some sort of advantage when playing at their own venue - it might be a psychological or a physical advantage like playing at altitude - but there are two leagues where there’s a huge contrast when it comes to playing at home.

We’re talking about Major League Soccer in the United States and the Premier League in England. First, let’s analyse what happens when playing at home on U.S. soil.

The MLS has always been a league where the home advantage is a huge factor, but there’s no stand out reason to explain this phenomenon. One idea behind this theory could be the fact that with more and more teams being added to the league in recent years, some franchises need to travel further than ever.

The growth of the league has also been a factor, with the MLS experiencing an exponential amount of growth over the past decade, as shown by the table below.

And it’s unlikely to stop anytime soon, with plans for Atlanta United FC to join in 2017 and Minnesota United to follow suit, playing their first game in MLS history, either in the same year or the following season. This will raise the total number of teams to 22, with future plans looking towards a total of 26 teams by 2022.

Making things more difficult for weary players is the fact that MLS tends to have midweek matches and CONCACAF Champions League fixtures so distances end up taking a toll on most teams. For distances in the MLS, this article explains better how travelling long distances effects each team’s depth as well as their performances over the course of a single season.

The data certainly supports the theory that home teams indeed have an advantage. The graph below shows the percentages for wins, losses and draws in the past five seasons. 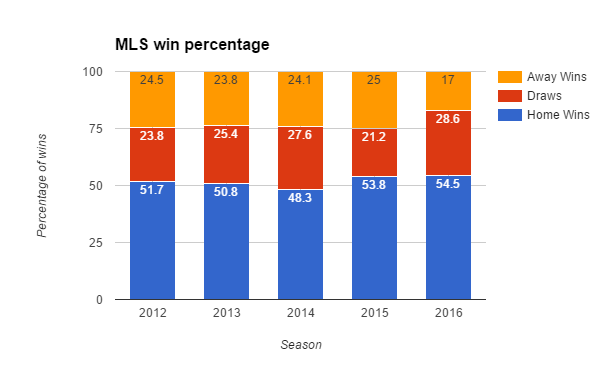 We can easily conclude that playing at home is a huge advantage in the MLS. Over the course of the past five seasons over 50% of the games have ended with home wins, whereas the away wins were at an all-time low in 2016 with only 17% of the matches ending with three points for the visiting side.

MLS however is not the norm. Some of the top leagues in Europe have the opposite phenomenon, and with much shorter distances, the home advantage is, at times, non-existent.

We can look at the Premier League as an example. With most Premier League teams concentrated in a relatively small area, comparatively with the USA, there isn’t a lot of travelling involved. The Newcastle/Bournemouth fixture is the furthest for travelling fans at 359 miles by road, compared with a 3185 mile road trip for Vancouver Whitecaps fans to see their side play the New England Revolution. When we mix this fact coupled with the parity shown in the league in recent years, results indicate that being a home team in the Premier League is not much of a factor as it appears in other countries. 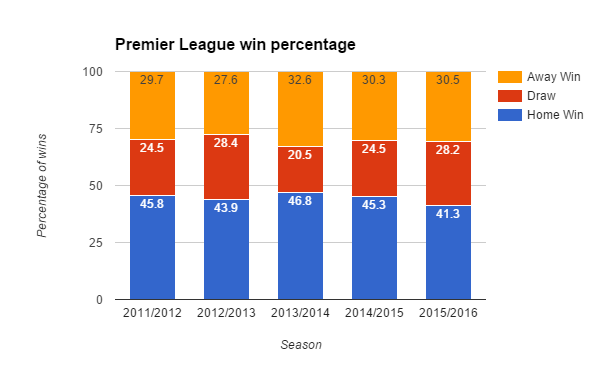 Yes, home teams still win the majority of the games but it’s not as evident as in the MLS. The last time in the Premier League that the home sides won more than 50% of their matches in a single season was in 2009-10. This result is not the norm, as it was the only time it has happen in the past 10 years.

Again, this trend is not repeated in other leagues across Europe. If we take the top five leagues (Spain, Italy, Germany, France and England) as data to be analyzed, we can realise things are far more even than one would imagine.

The chart below shows the win percentage for home sides in the five aforementioned leagues over the past five years: 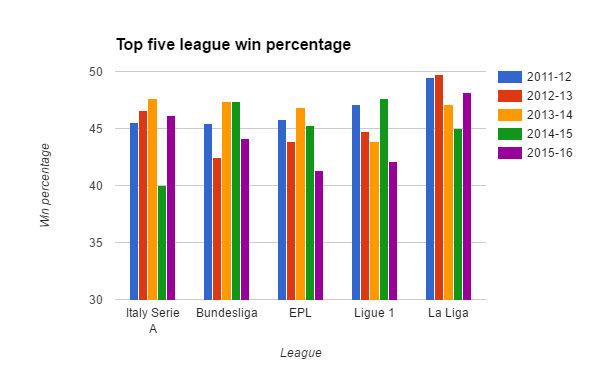 The first thing we can conclude about these graphics is that things are distributed all over Europe when it comes to see which league has the biggest advantage for home teams. Spain’s La Liga favoured home teams in both 2011-12 and 2012-13, while 2013-14 saw the Italian Serie A as the top league for home sides. The French Ligue 1 registered the best win percentage in 2014-15 while Spain recaptured the top of the table in 2015-16.

It’s widely considered as Europe’s most balanced league – despite the presence of Bayern Munich and, to a lesser extent, Borussia Dortmund – and it’s a competition where each team can beat another on any given weekend.

As for this experiment, we can conclude that the MLS strongly favours home teams. The English Premier League, however, lies on the other end of the spectrum, and this data is really a fair reflection that the so called “home advantage” doesn’t apply to all countries on the same level.