Is MLS paying too much for players past their prime?

When it comes to transfers, the MLS has some unique rules that make it pretty difficult to analyse, and at the same time these same rules make them impossible to compare with other leagues. The presence of a yearly Draft, the system of trading (very popular in American sports but not so much across the pond) and the fact that teams must adjust their budget to a salary cap (in an attempt to establish financial parity among all parties) all add to the package.

To top things off, it’s very difficult to quantify how much players are worth in the MLS. Considering the league has a policy of not disclosing transfer fees for players arriving stateside, the only way to measure a player’s value is through his market value.

With that in mind, we have decided to analyse the most recent transfers in the league in an effort to see how MLS compares with the rest of the world. It’s known that the MLS wants to make an effort to compete with Europe’s top tournaments, so here are the league’s top 10 arrivals that happened throughout the 2015 season. 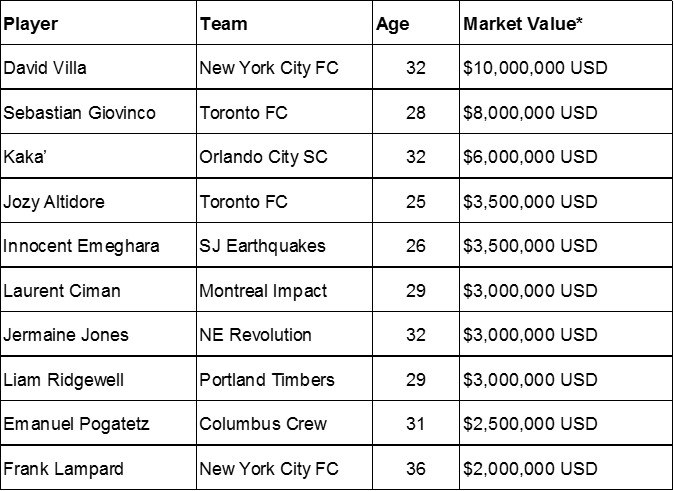 In comparison, here we can look at a chart for the top 10 transfers in the current 2016 season. 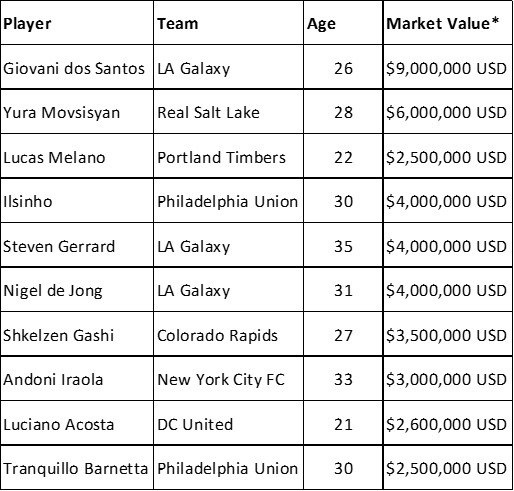 Analysing both sets of data there are several things we can conclude:

- The teams continue to overpay for veteran players, and rewarding them for their status instead of paying accordingly to what they can produce on the pitch. Taking into account the league’s top transfers over the past two seasons, we could argue that only a few of them (Sebastian Giovinco, Yura Movsisyan, Gio dos Santos and perhaps Nigel de Jong) remain in their prime years. Others likes David Villa, Tranquillo Barnetta and Emanuel Pogatetz are starting to leave their best years behind, and other veterans such as Frank Lampard, Andoni Iraola and Kaka’ are clearly past their prime.

- On that same note, the salaries are not reflecting the players’ contributions in the pitch. It’s very hard to justify why, for instance, Lampard has one of the league’s highest salaries ($6,000,000 USD) while more productive players are doing a better job while earning less money. Andrea Pirlo is another case worth mentioning as the former Juventus midfielder has struggled to make an impact since he joined the MLS, yet he’s one of the biggest salaries in the league with a figure that comes close to the $8,000,000 USD.

- The most popular transfers continue to involve relatively old players, a bad sign for the future of the league if they want to establish as a top-tier competition in the world. Even though the rule of the Designated Player – one that allows teams to go over their budget to sign quality players on the international market – has been a step in the right direction, teams continue to sign players that are simply not good enough to make an impact in one of Europe’s top leagues (see Julio Baptista joining Orlando City SC and even Giovani dos Santos, as the Mexican only scored one goal in 26 Liga matches for Villarreal FC before joining LA Galaxy).

- Taking a quick look at the players’ market value we can conclude that MLS is still miles ahead of the important European leagues when it comes to money spent in the transfers department.

MLS has always wanted to compare to the likes of the English Premier League, the German Bundesliga and Spain’s La Liga, but they are very far away yet. If we lower the scales and compare them with some other European league with a decent pedigree (like Russia’s Premier League, France’s Ligue 1, Turkey’s Süper Lig and Portugal’s Liga NOS, to name a few), we can see the numbers are still very far away, both in total money spent… 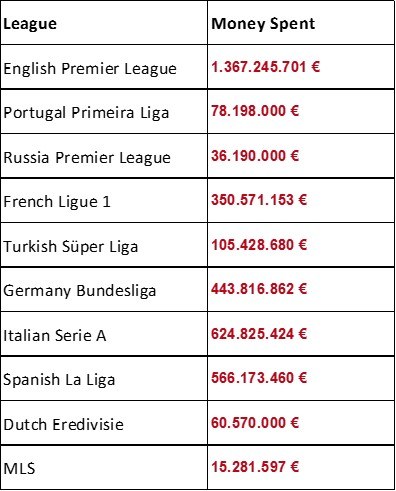 …as well the value of the individual players purchased. 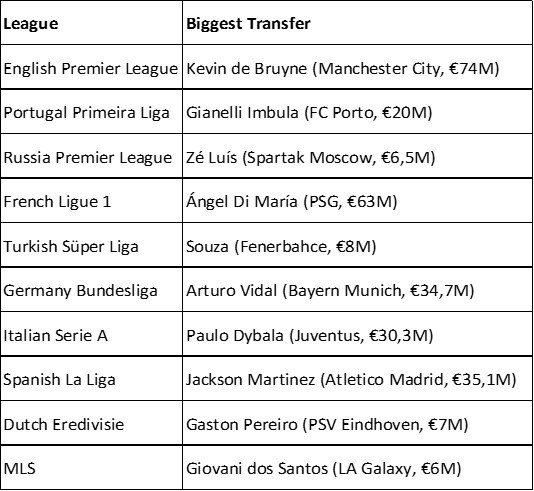 The entire blame can’t be placed on the teams, however, and scheduling might be part of the problem as well. The fact that the league runs from March to November limits the activity on the transfer market, and if a certain team wants to sign a top player, then they are forced to bring him midway into the season. In some cases the formula works, but it would be way better if they could adjust the schedule to align it with the European leagues.

It can’t be hidden that MLS has taken several steps in the right direction toward becoming a more respectable league. After all, the growth since their first season back in 1996 has been evident, and they keep growing until the point they are becoming a preferred destination for international players. Until they decide a better way to share the revenue money and until some of the old transfer habits are revoked for good – such as the one of paying lots of money to players past their prime in an attempt to boost the merchandising instead of the on-field product - the league will be never be able to compete with some of the European powerhouses as commissioner Don Garber wants it in the near future.