Last week we published an article which explored the data around LA Galaxy’s chance creation and investigated how using qualitative and rich data can help teams understand both their own and their opponents’ strengths and weaknesses. The study offered recommendations of how the insight and visualisations can be used from a managerial perspective to tailor tactics and exploit opponents. Towards the end of the article we touched briefly on the chance creation for specific players. At this stage it was clear that LA Galaxy’s designated players in 2016: Steven Gerrard, Giovani dos Santos and Robbie Keane, had the majority of chances. This is not particularly surprising given the expectations placed on designated players in Major League Soccer (MLS), but if we take a short step away from chance creation and focus on LA Galaxy’s designated players, how well did they perform last season? The stats around these players should be able to tell us more, so let’s investigate.

Before we get started, it is important to note that this study uses data from LA Galaxy’s 2016 regular season only, so does not include the three play-off matches they took part in. Secondly, the LA Galaxy players have been split into two groups: designated and other players, where the latter consists of every player barring Dos Santos, Gerrard and Keane. Lastly, when referring to chances, we only account for successful cases consisting of any play inside the danger zone that constitutes a threat (including shots, passes and headers around the attacking third).

The first visualisation illustrates the proportion of chances split by designated and other players. This is displayed in a stacked bar graph with the proportions for each chance visible within the graph, with the grand total on the top. This gives a manager a complete view over the distribution between the two player groups and the ability to see how the team create their chances.

The second graph looks at who assisted the chances created by LA Galaxy’s designated players in a simple bar graph. This leads on to the third visualisation, which splits the number of assisted chances by designated and other players for Dos Santos, Keane and Gerrard. In the fourth graph, we switch our focus and compare the total proportion of goals scored by designated players versus other players. These three graphs enable the manager to identify which players demonstrated strong on-field relationships with each other. Furthermore, this could be a useful tool in terms of how to attack and formulating the best units within the team to achieve success.

The sixth graph dives deeper into goal scoring, looking at the type of goal scored by each player; this is displayed in a bar graph with a split for the type of goal. This could be particularly useful in identifying the players who have a track record of scoring key goals for the team. In the last three graphs (one per player), we look at the type of chances that had a high propensity to lead to goals for the designated players. With this, a manager could be tactical in their team structure to ensure that players are in the optimum positions for goal scoring.

So let’s move over to the analysis: 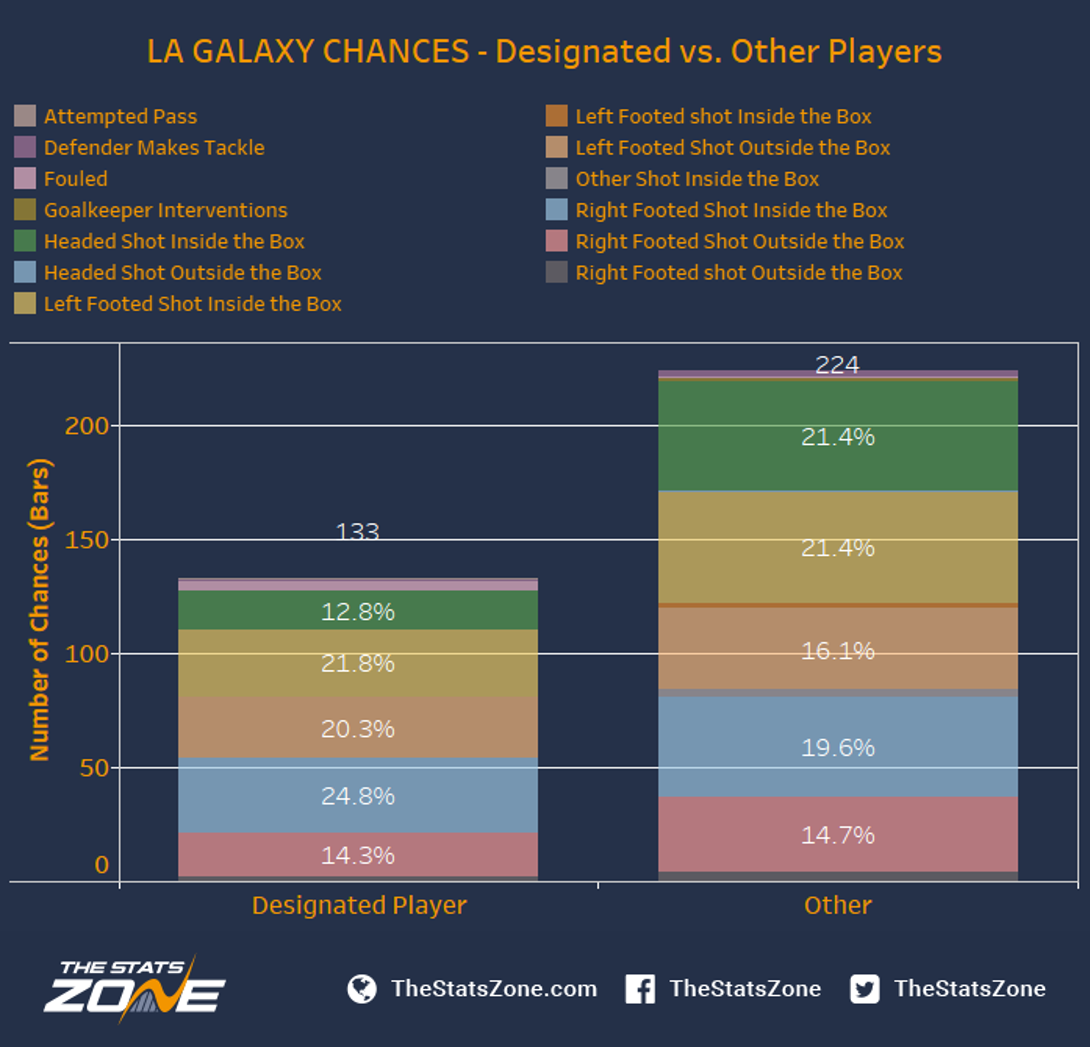 Looking at the graph above. we can see that LA Galaxy’s designated players had 133 chances last season, compared to all other players at 224. So, roughly 1/3 of all chances fell to Dos Santos, Keane and Gerrard. This statistic is impressive, but given that the three players are relied upon for their attacking abilities, it is not altogether surprising. Looking more specifically into the type of chances, it appears that headers inside the box were more common (in terms of % of chances) for the ‘other players’ (non-designated), at 21.4% compared to only 12.8% from designated players. One explanation for this (as mentioned in our previous article) could be that two of the non-designated players, Gordon and Van Damme, are over 6’3” and so were more likely to have headers on goal with their height advantage. For all other chance types, we can see that the proportions are similar between the two groups. With this in mind, the next graph breaks down the specific players who have assisted chances for LA Galaxy’s designated players: 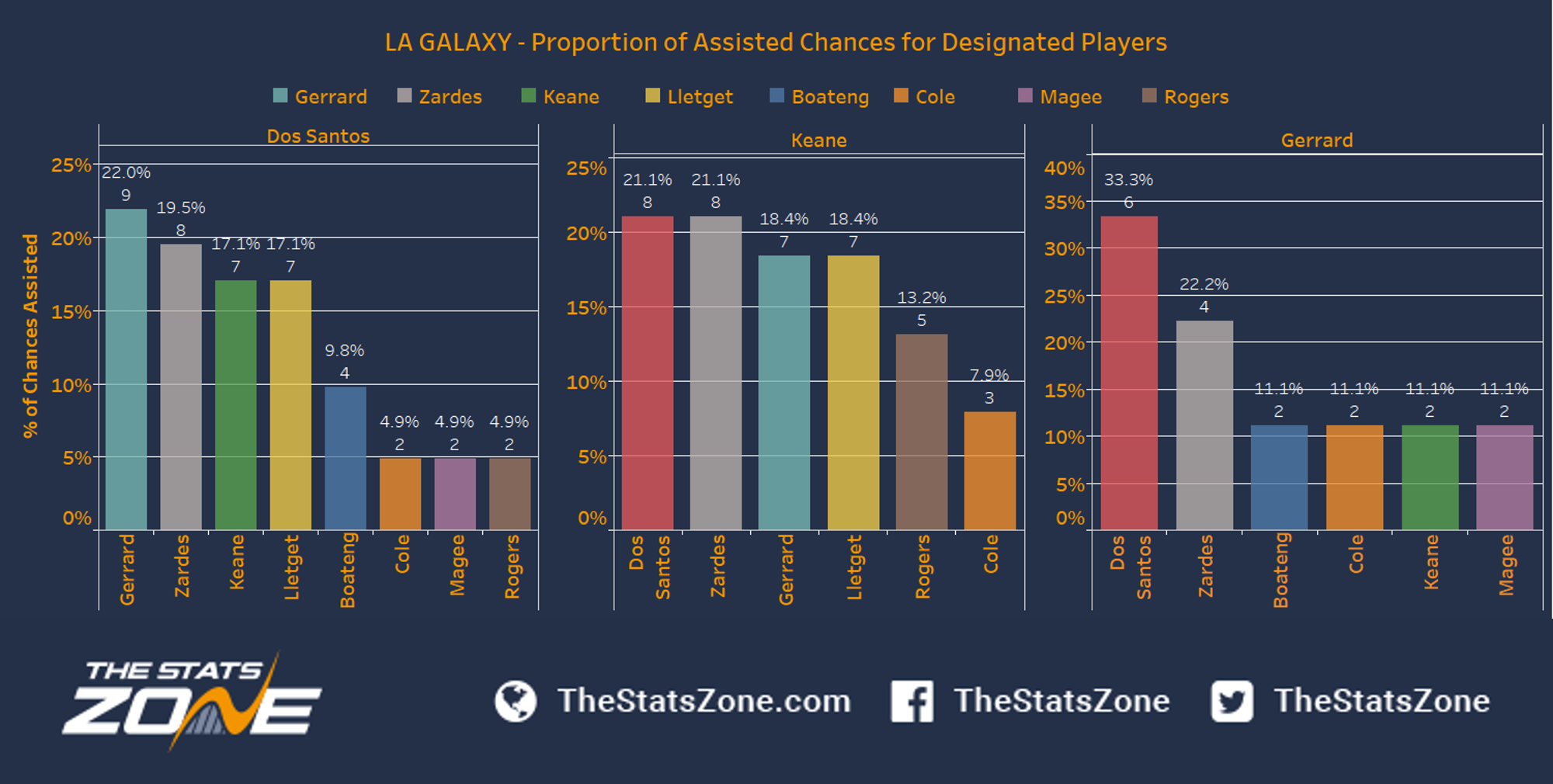 Starting with Dos Santos, we can see that he has had the strongest partnership with Gerrard, who has set up 22.0% of his attacks. On the flip side, Don Santos set up the majority of Gerrard’s chances - 33.3%, which is 11.1% more than any other player.

The majority of Keane’s assisted chances come equally from Dos Santos and Zardes at 21.1%, and then by Gerrard and Lletget at 18.4%. As mentioned, Gerrard’s key support in the attacking area comes from Dos Santos, followed by Zardes at 22.2%. The first interesting take-out from these graphs is that Zardes stands out as having a strong relationship with all three designated players, which is even more impressive when we consider that he only started 17 games in total. Another observation is that Dos Santos provides the highest percentage of assisted chances for the other designated players. In fact, the data shows that all of the designated players appear to have a strong relationship with one another. Having said that, it is relevant to point out that this strong track record could be attributed to the fact that they tend to start most games together and hence their collaborative play would be more natural. This leads onto the next graph, which looks at the proportion of assisted chances our designated players have provided to each other, compared to those from other players: 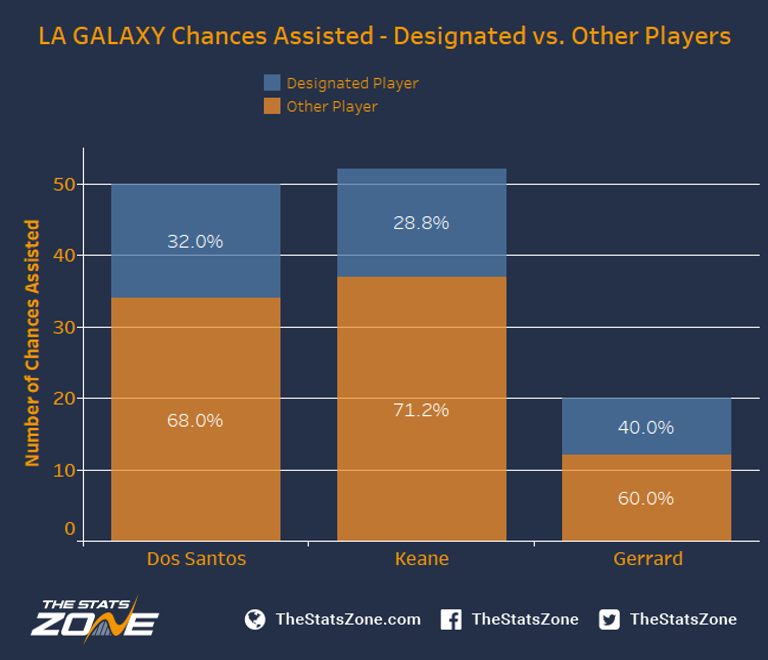 We can see that Dos Santos provided 32.0% (16) of his assisted chances (50 in total) to designated players, compared to Keane at 28.8% (15 of 52 total assisted chances). Gerrard yet again shows a poor performance, only having provided assists for 20 chances, out of which 40% were assisted to designated players (eight). Notably, Keane provides slightly more assisted chances than Dos Santos, even though the latter, as we previously mentioned, has a higher success rate. To extend this, we will look at the proportion of goals scored by designated versus other players: 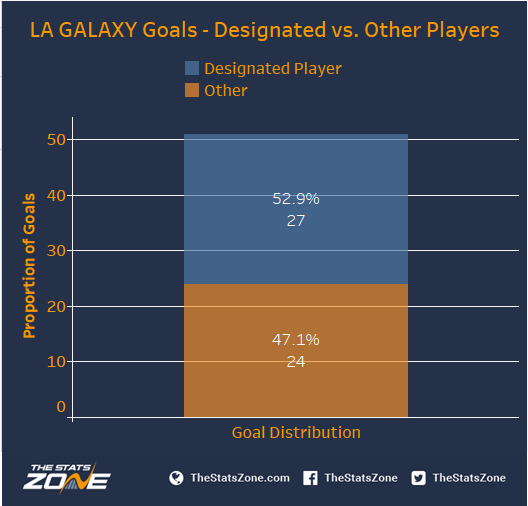 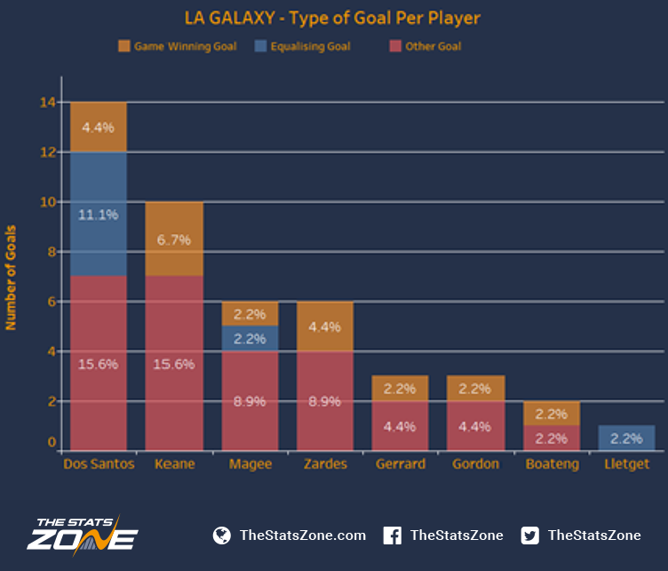 It comes as no surprise that across last season, Dos Santos scored the most goals in the regular season (14), followed by Keane (10). However, when we take a closer look into the data we can see that Keane actually scored the highest proportion of game winnings goals, with a total of 6.7% or a total of three goals. This means that out of all goals that Keane scored, 30.0% (3/10) of them directly resulted in a win for LA Galaxy. On the other hand, Dos Santos only scored two game winning goals which accounts for 4.4% of the total. This means that, of his total number of goals scored, only 14.3% directly resulted in his team winning the game. When looking at the number of equalising goals, we can see that Dos Santos scored seven goals or 11.1% of the total. This means that 50% of the total number of goals scored from Dos Santos ended up in the team at least drawing. When looking at this performance metric for Gerrard, we can see that out of the total three goals he scored, only one was a game winning goal. Clearly though, the fact that the sample size is relatively small should be taken into account before reading into these percentages.

Let’s now look at specifically what type of chances led to our designated players scoring goals: 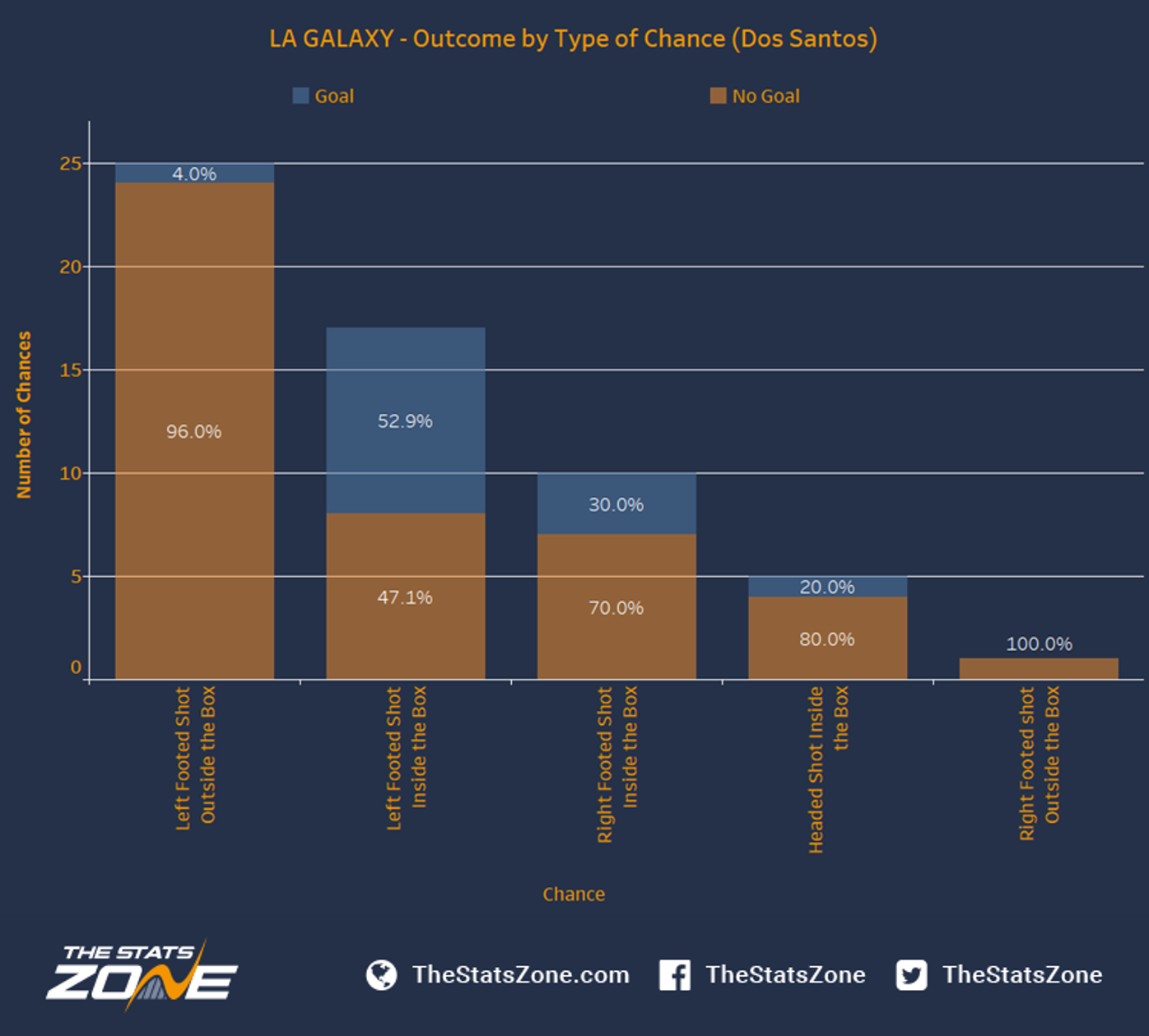 Starting with Dos Santos, the vast majority of his chances (25) came from left-footed shots outside the box. He also has a remarkable track record with the same foot from inside the box, converting 52.9% of all attempts from this type of chance. Furthermore, we can see that his second highest opportunity conversion rate comes from right footed shots inside of the box, suggesting that you get the best out of Dos Santos when he gets to work within the box. 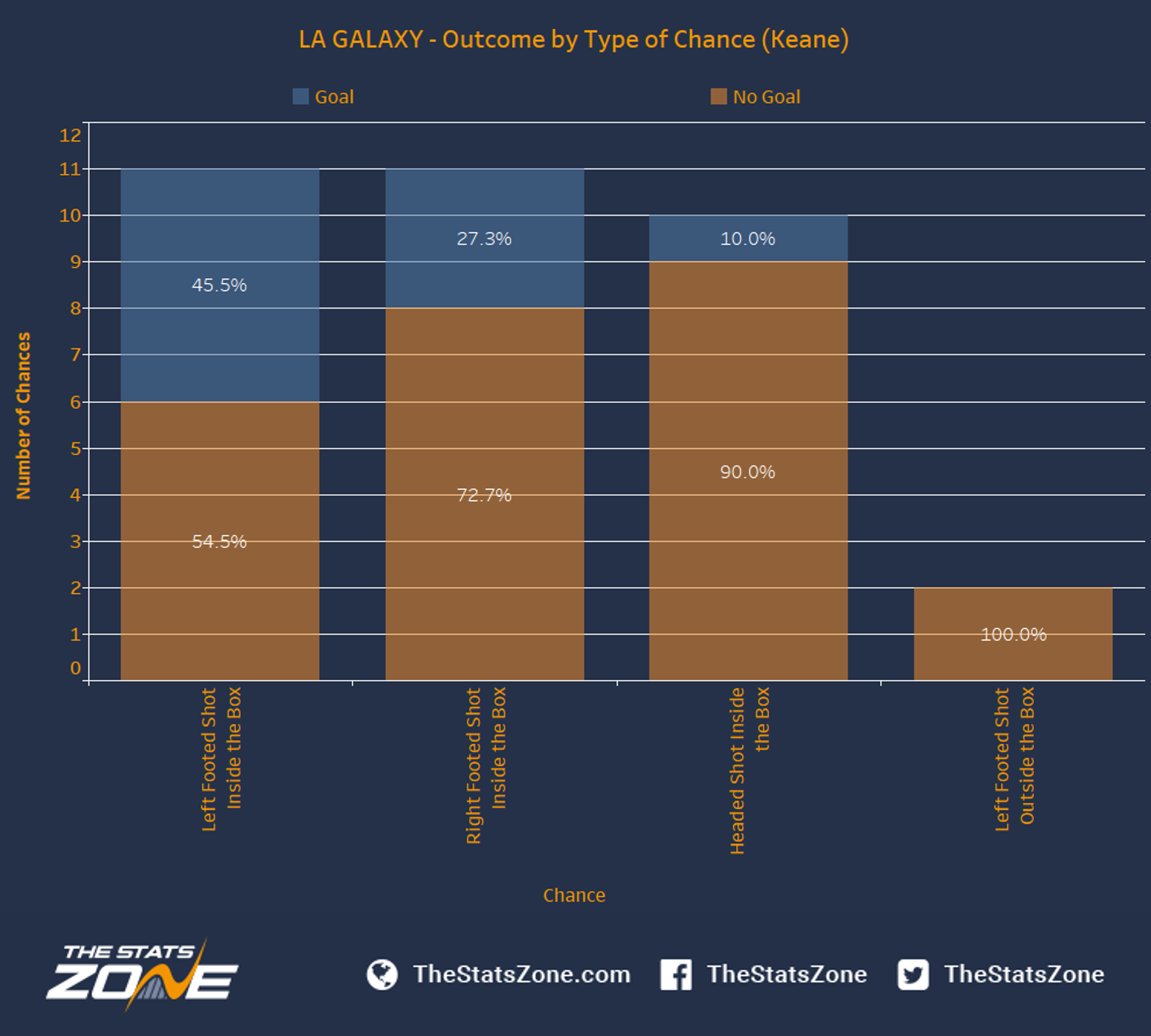 Looking at Keane, we see a similar story with the striker scoring most of his goals with his left foot inside of the box at 45.5%, followed by right-footed shots at 27.3% - impressive given the fact he is right-footed. 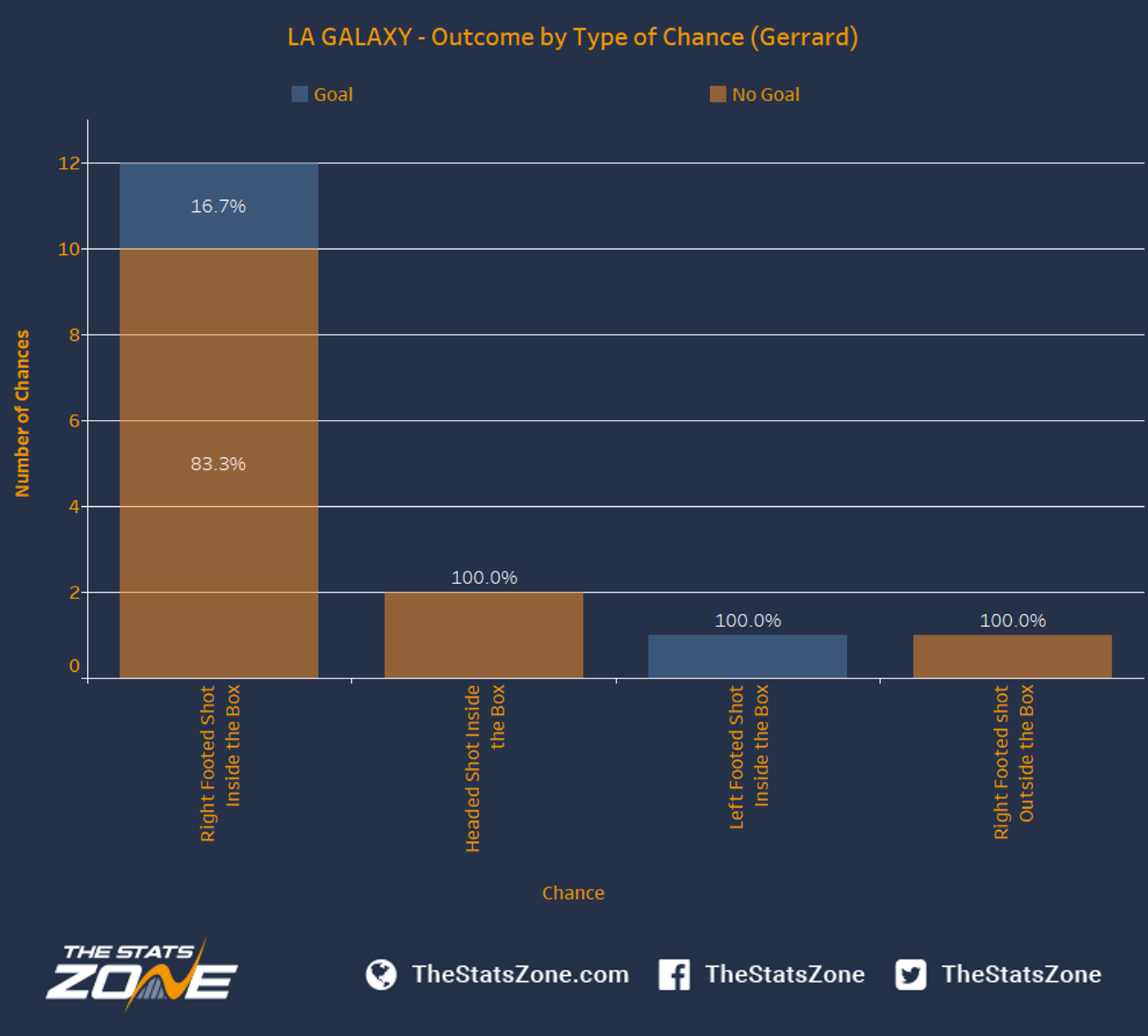 Gerrard scored three goals during the regular season campaign. He scored two goals and 16.7% of his attempts with right footed shots inside the box. His other goal which was from a left footed shot inside of the box, which was the only occasion he attempted it. We all know that Gerrard has a great reputation for his attacking style on the football pitch. He was a marquee signing for LA Galaxy and thought of as the star player, so it is surprising that a player of his calibre only managed to score three goals. His subsequent retirement is likely a direct result of his decline in output.

To conclude, we have looked at LA Galaxy’s designated players during the 2016 regular season. We have identified that the designated players have a heavy involvement in chance creation, accounting for roughly 1/3 of all attacks. They were also all very active in setting up the chances and had a propensity to assist each other in setting up attacks. Looking at the number of goals scored, the designated players (when combined) scored more than half of LA Galaxy’s goals during the 2016 regular season. However, when drilling down to the specific type of goal, we could see that Keane was the only team member who scored a significant amount of game winning goals, although Dos Santos and Zardes (a non-designated player) did contribute here to a lesser extent.

Another interesting reflection from the graphs is that there are no close contenders to the level of play demonstrated by two of the designated players, Dos Santos and Keane, whilst Gerrard’s statistics are decidedly underwhelming in comparison. From the rest of the squad, Magee showed potential, having scored six goals (third highest goal scorer), but over a season this isn’t a particularly remarkable achievement. Therefore, the fact that the designated players combined didn’t manage to score enough goals of importance, coupled with little contribution from the other players in the squad, gives us some explanation as to why LA Galaxy struggled last season.

The analysis in this piece provides just one example of how much data is available in sport, and how it can be used by sports management to help in strategic and tactical decisions. Our next analysis on LA Galaxy’s 2016 regular season will be focusing on goalkeeper distribution.

The Stats Zone provides bespoke services for some of the leading teams, associations and confederations in world football. This analysis on the LA Galaxy was part of an internal study and not used in a commercial sense. Please do not hesitate to get in touch with us through our ‘Contact’ page - http://www.thestatszone.com/contact if you would like to discuss any bespoke research projects for your organisation.